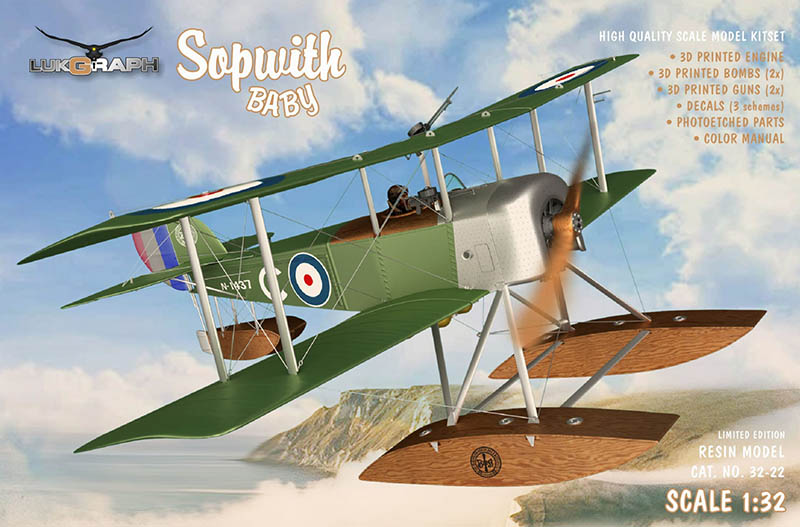 In recent years, Lukgraph has established itself as one of the premier providers of resin aircraft kits. Specialising in esoteric between-the-wars aircraft, this Polish company's latest release is a series of kits based on the Sopwith Baby airframe, which first entered service in 1915. Four versions of the kit are available, and Lukgraph has kindly supplied for review kit 32-22, which focusses on the Sopwith Baby in British service.

The kit features Lukgraph's new style of box art, with a painting of the aircraft in action, rather than a static profile image. The contents of the box itself are protected by a layer of bubble-wrap, with the parts grouped and housed in resealable plastic bags: 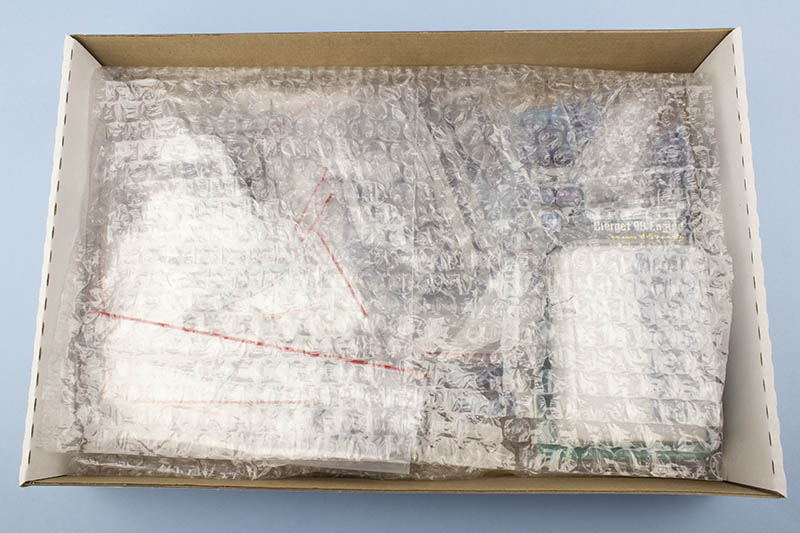 Along with expected resin parts, the kit also provides some 3D-printed components: namely, the engine, guns, and bombs:

As far as I can tell, this is a new innovation for Lukgraph. Also included in the kit is a small photo-etched fret, a modest decal sheet, a self-adhesive sheet of instrument dials, and the usual instruction manual.

The bulk of parts supplied in the kit are cast in standard polyurethane resin. Two different types of engine cowl are provided, and the interplane struts are all cast around a brass rod core. The wing pieces themselves also have brass rods embedded into their mating surfaces to provide additional strength at the join.

Casting quality is mostly excellent, though the tyres suffer from a couple of large air bubble holes that will require filling. Many parts still sport the remnants of their respective casting blocks, so these will also need some careful clean-up as part of your usual preparations.

The fuselage his hollow-cast in two halves, and comes taped together: 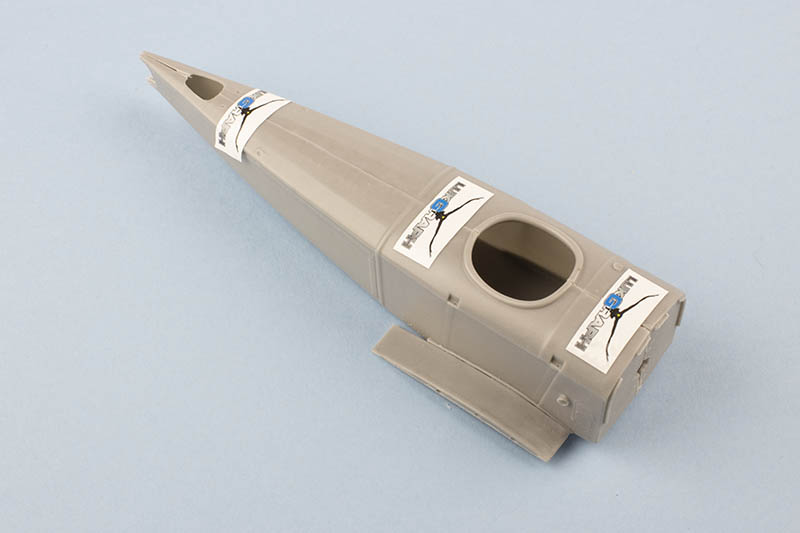 The bottom join will require some remedial work to clean up where the parts have been removed from their casting blocks: 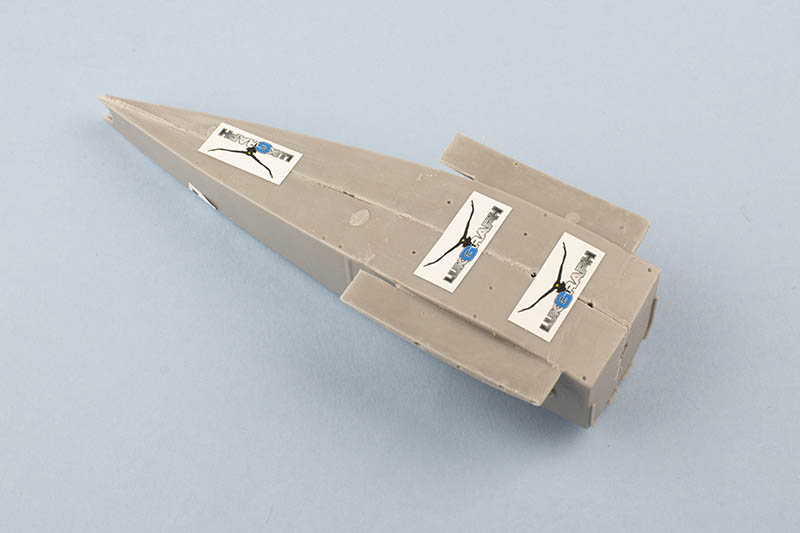 Surface detail is minimal as befits the construction methods of the prototype, but does seem a little thick in places at first blush: 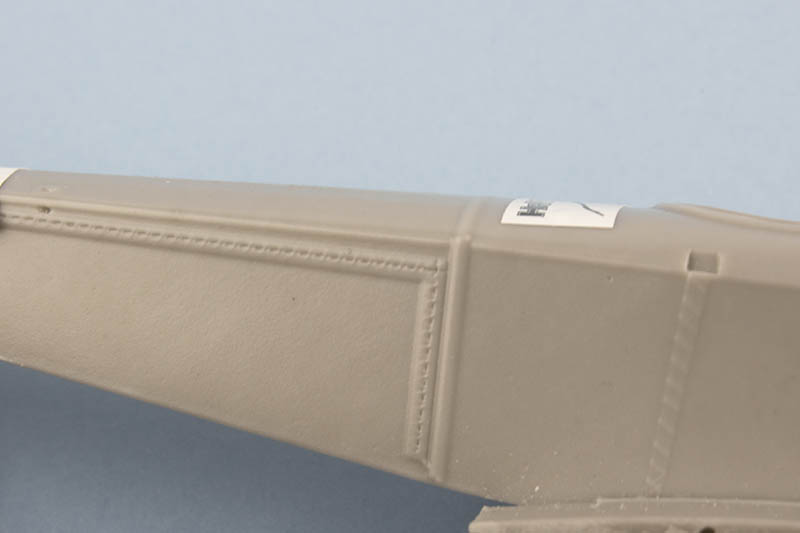 As noted earlier, the engine, guns, and bombs have been supplied as 3D-printed parts, and are very nicely done indeed.

The 3D-printed engine comes on a single plinth that contains all the parts required to build the completed engine, including the central engine block, cylinders, and exhausts. Also included are several lengths of thin metal rod from which to create the required push rods.

One of the cylinders had broken off the plinth in my sample, which resulted in same damage to the fine detail at its top. This is unfortunate, but otherwise, this engine set is terrific, and definitely superior to what could be achieved with traditional resin casting alone.

Two 3D-printed Lewis guns are included, each on its own mounting plinth: 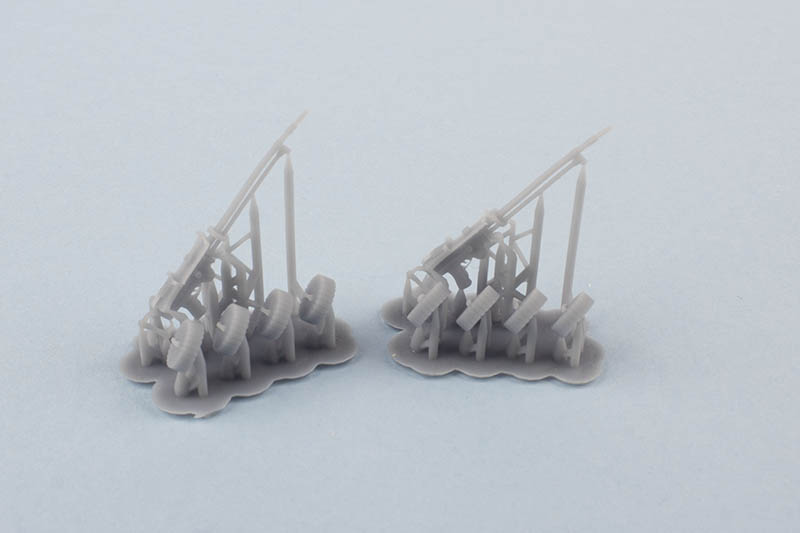 These are identical prints, and are exquisitely detailed. Four magazines are included with each one. Unfortunately, the barrels on both units are bent on my samples: 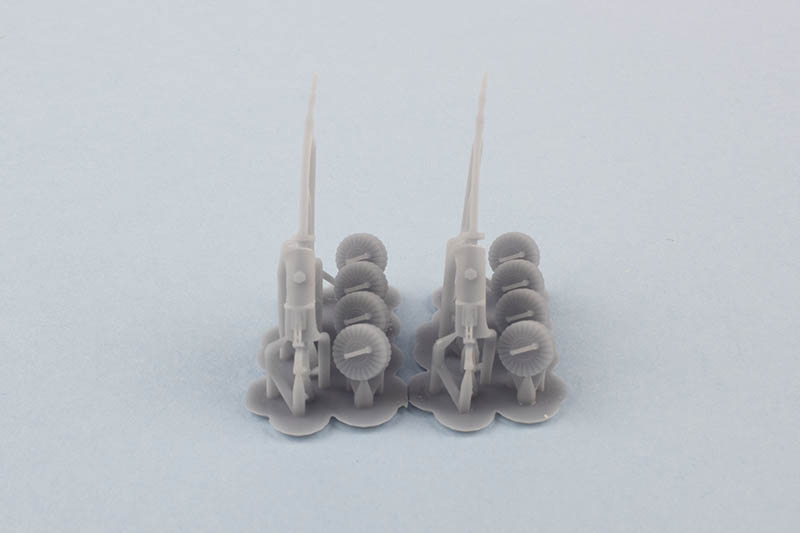 Hopefully it will be a simple matter to straighten them out with hot water once they're released from their mounting poles.

The final 3D-printed components are two bombs, presumably of the 65lb (28kg) variety: 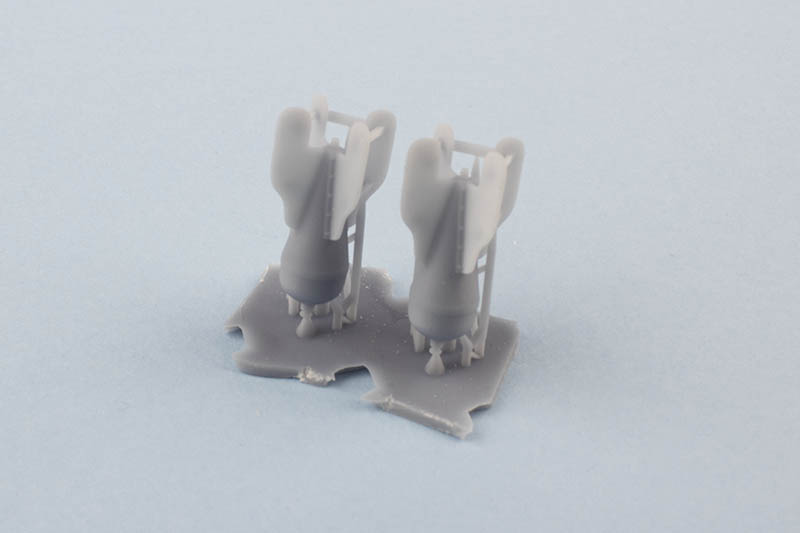 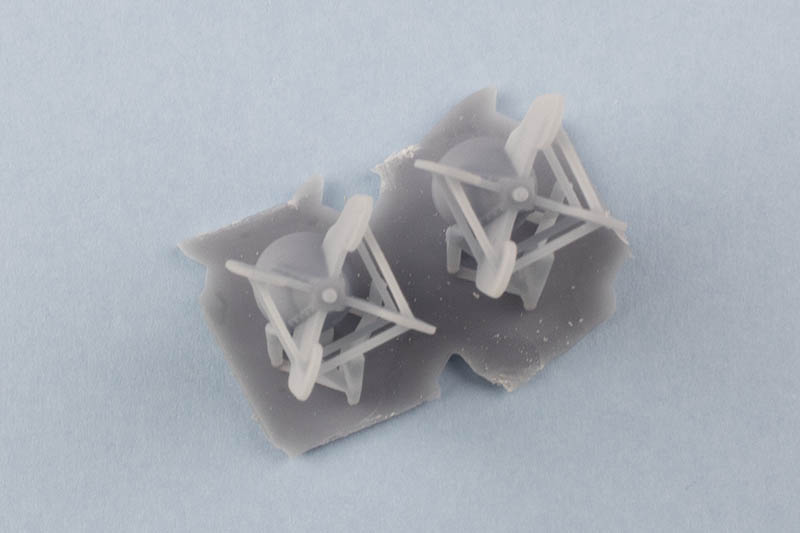 As is usual with many kits these days, and resin kits especially, a small fret of photo-etched parts is included in the kit: 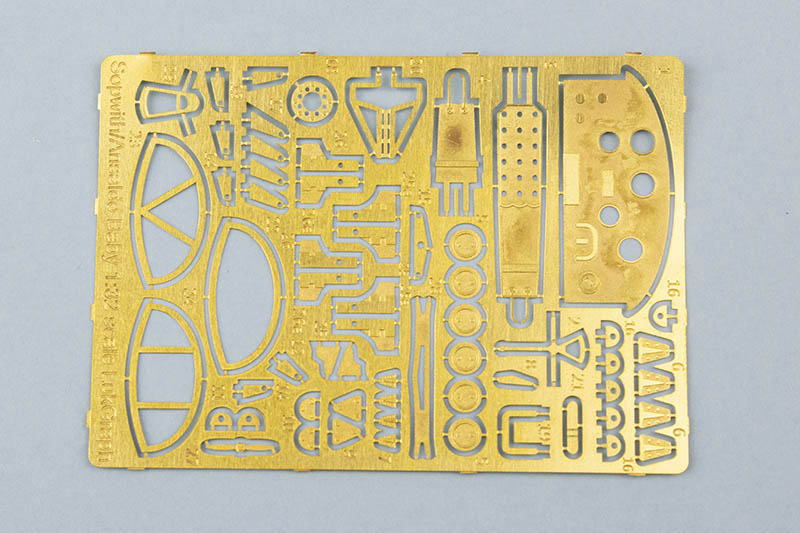 This contains a myriad of cockpit and external detail parts, the combination of which will greatly add to the finesse of the final model. Some of the parts—such as the frame for the acetate windscreen—will require some care and patience to achieve the desired result, however. In fact, three windscreen frames appear to be included, but only one (part 22) is required for this build. My guess is that the other two are applicable for other versions of this kit.

The final components in this kit consist of a sheet of self-adhesive instrument dials and templates, along with a small square of acetate sheet, from which the modeller is required to fashion a windscreen using the aforementioned templates.

A small decal sheet provides the markings for three aircraft:

The aircraft featured are N-2017 "K", 8151 (no codes), and N-1437 "C". No details about these particular aircraft are included in the painting guide, which is unfortunate.

The decals themselves are nicely printed (presumably in-house), with good registration, though the white areas do look to be potentially a little translucent. Two flashes for the rudder are included, but are not shaped to fit, so you'll need to trim them to shape either before or after application to the model. Decals are also included for the red chequers featured on the nose of the first option, along with a rectangle printed in the same red, which you can use for touch-ups if required. Nice one, Lukgraph!

The instruction booklet is in Lukgraph's usual format, printed in full-colour on quality glossy paper stock, and stapled at the top. This requires you to flip each page up calendar-style, rather than the usual left-to-right booklet format. 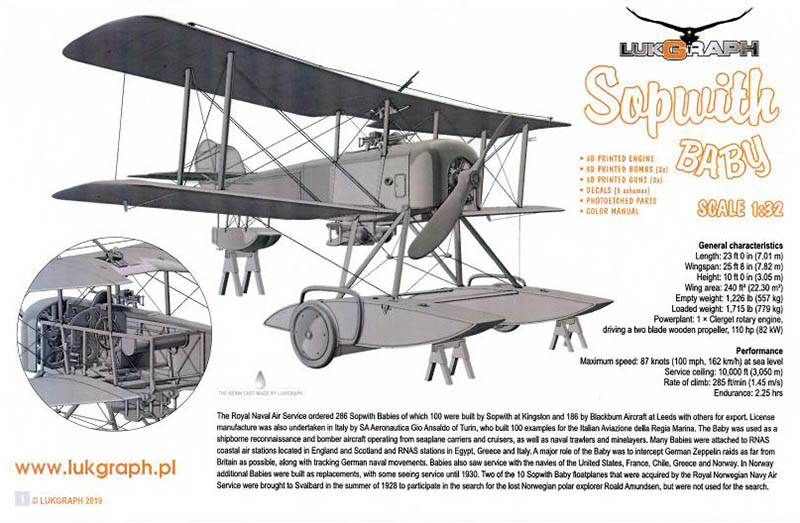 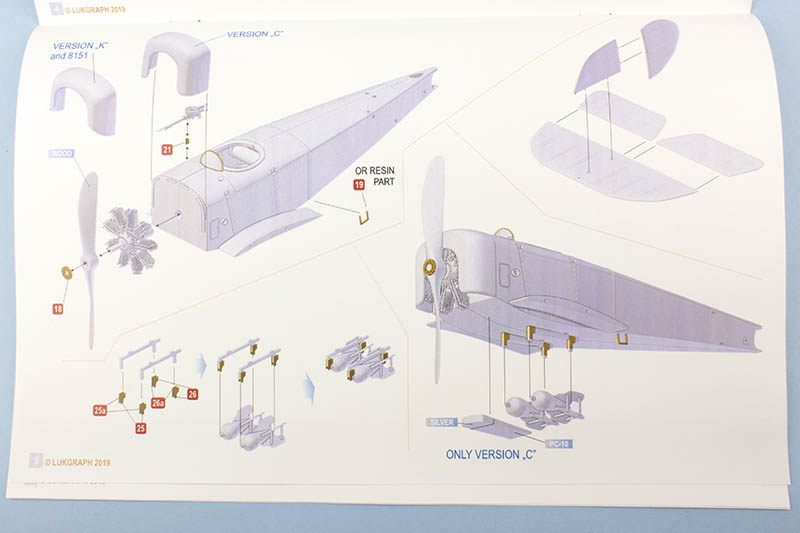 Careful attention will have to be paid to the orientation and installation of parts, as there are few locating guides moulded into the parts themselves.

The last two pages of the booklet are devoted to the three painting schemes. Only port-side profiles are included, along with the upper and lower wing surfaces: 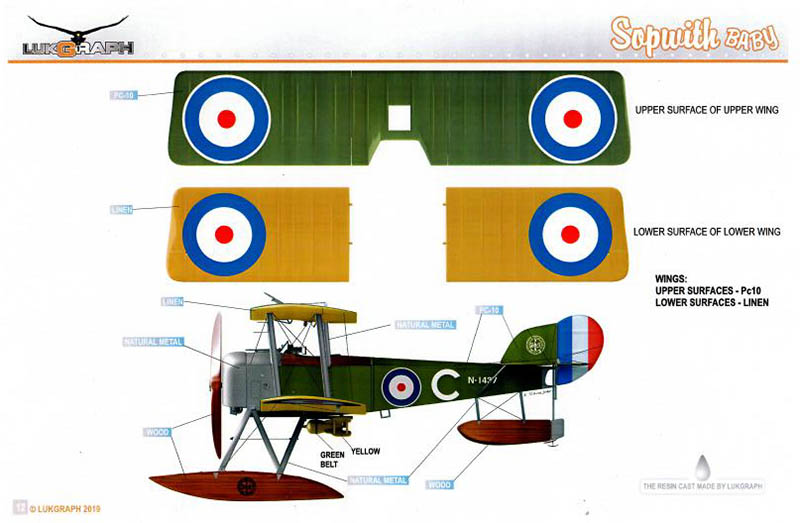 I must commend Lukgraph for having the courage to bring esoteric subjects like the Sopwith Baby to market. The nature of the medium dictates that this kit will require some experience to build successfully, notwithstanding the extra complications provided by the multi-wing nature of the aircraft itself. As such, it's not really suitable for beginning or inexperienced modellers. But the kit itself is well thought-out, well detailed, and well presented, and should build into a terrific replica in the hands of an experienced modeller.

Many thanks to Lukgraph for the review sample.