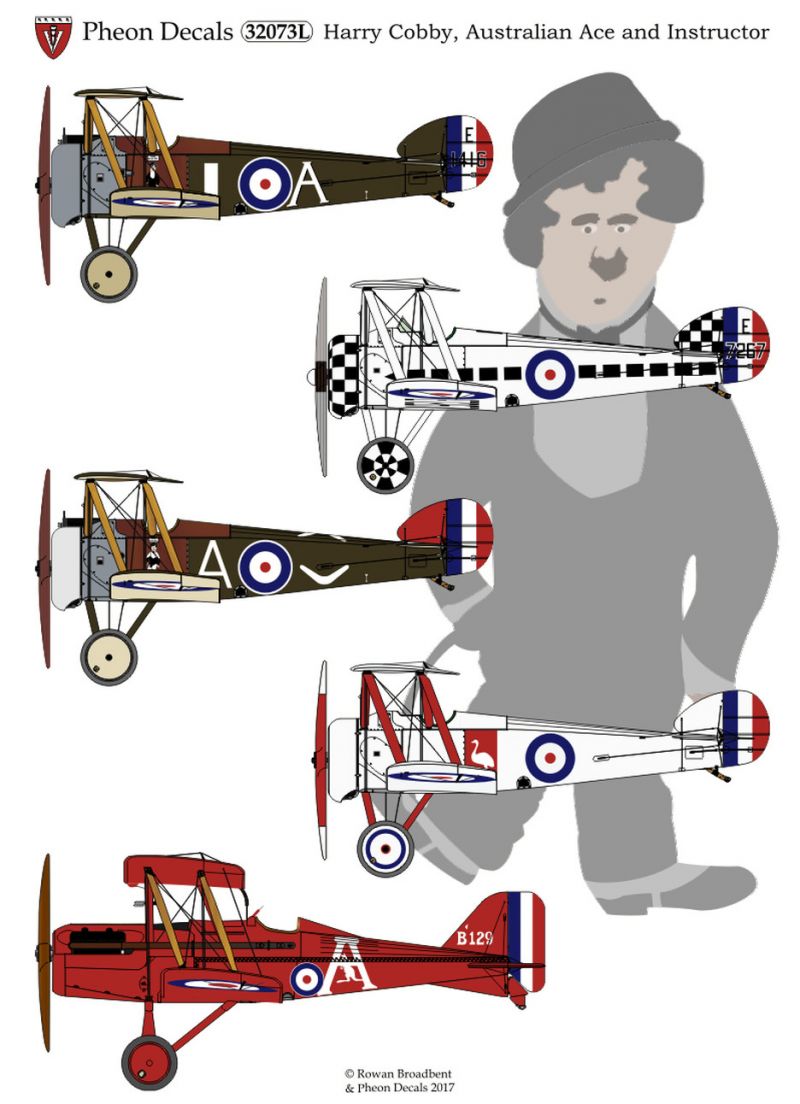 It's been nearly two years since the last Pheon Decals releases, but two new 1/32 scale sheets have reached completion and were released in mid-July. Here we examine a decal sheet that is sure to be popular with fans of early Australian aviation and aviators - a collection of aircraft flown by the Australian Flying Corps' top scoring WWI ace Harry Cobby.

Be aware, this decal sheet is a limited edition so make sure to place an order sooner rather than later if the subjects interest you!

Before the decal sheet was announced in mid-2019, I was not familiar with Harry Cobby but it turns out I was familiar with one of his aircraft featured in this decal collection. According to the history included with Pheon's standard booklet detailing the aircraft included in the decals, Cobby is credited with 29 victories including five observation balloons while flying Sopwith Camels with 4 Squadron.

Among his medals were the Distinguished Service Order and Distinguished Flying Cross with two bars. After the war Cobby served as an instructor for new pilots in England and later joined the RAAF ending his career as a Wing Commander. 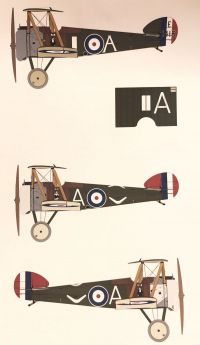 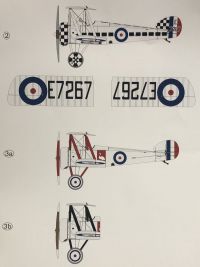 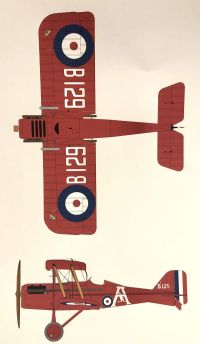 Pheon's set include markings for four aircraft: three Sopwith Camels (all with the Clerget rotary engine) and one SE5a (with the geared Hisso engine). Only two of the aircraft are attributed to Cobby himself. The third Camel and the SE5a were flown by Cobby's friends/colleagues Capt. "Tabby" Pflaum and Capt. Les Holden. Standard for Pheon, full color side profiles (and additional profiles when appropriate) are included on glossy cardstock. This is supplemented by a small booklet with history of each aircraft and in this case, the pilot as well.

1a and 1b: It's not certain from Rowan's research whether 1a and 1b are the same airframe at different points in time or not. These schemes are A Flight of AFC 4 Sqn and feature the painted Charlie Chaplain profiles on the forward fuselage. Amusingly these aircraft feature signs "liberated" from the Southern Railway under the cockpit opening on each side. On the left there is a "Please do not spit" sign and on the right, a sign warning of the dangers of leaning out the windows of the train. Aircraft 1a is photographed with a modified air intake which the builder will need to scratchbuild.

2: Sopwith Camel #E7267, AFC Training Squadron, Leighterton, October 1918 through at least January 1919. A photograph of this white aircraft with black checkers on the cowling, rudder, wheels, and stripe down the fuselage has been quite widely distributed in books and online over the years. There is a larger windscreen on this aircraft that will need to be fabricated by the builder.

3: Sopwith Camel flown by Capt. "Tabby" Pflaum, AFC Training Squadron, Leighterton. This is another white-painted Camel with a red panel on the fuselage sides behind the cockpit featuring a white emu. It's not known whether the struts were painted red or black; both options are shown in the color profiles.

4: SE5a #B129 flown by Capt. Les Holden, AFC Training Sqn, Minchinhampton. The last of Cobby's friends and training squadronmates, Holden's overall red SE5 is depicted here. The large A with kangaroo painted inside it are prominently featured on the fuselage sides. While there is no mention in the instruction booklet of whether this aircraft was powered by a geared Hispano (Hisso) engine or the Wolsey Viper without gearbox, the color profile depicts the aircraft as an aircraft with a Hisso engine with the higher-mounted propeller. With this being the case, the builder can use either the appropriate Roden kit, or one of the coveted Wingnut Wings kits. 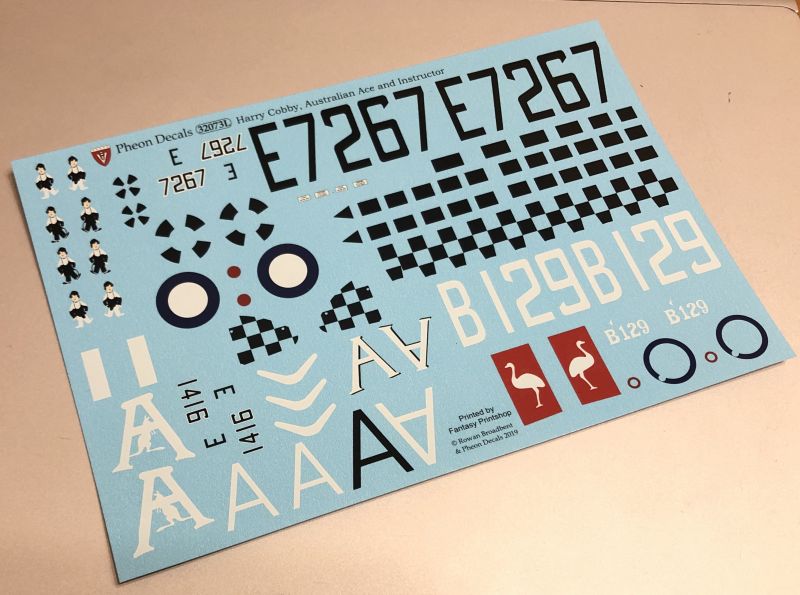 Pheon continues to use Fantasy Printshop for the printing of the decal sheets. In my experience, decals printed by Fantasy Printshop are absolutely superb in every respect and on par with decals printed by Cartograf. Upon close examination of the decal sheet, I am happy to report that there are enough decals included to build all four aircraft. All that's needed additional are kit decals or paint masks for the roundels (cockades) and the rudder striping. 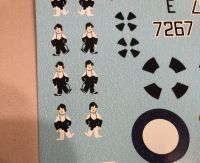 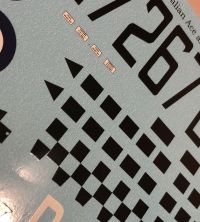 A total of eight Charlie Chaplains are included, in two varieties (one style has white trousers). The railroad signs for underneath the cockpit are included and are printed with extremely small and fine text. Aircraft codes are provided as are squadron identifiers, including those carried underneath the wings when appropriate.

Decals are provided for all the checkers for Cobby's personal Camel with the training squadron. Checkers for the wheels are given in two parts to allow them to better confirm to the conical shape of the hubs. I'm happy to report that there is no continuous carrier film on the front row of the cowling checkers which will allow them to conform around the curvatures at the front of the cowl much better. Strangely there is one checker in the front row that's placed farther aft than the rest. I'm unsure if this is intentional or a simple design error - it's probably best to simply apply this one square separately help ensure correct alignment.

I'm delighted to see the new releases from Pheon. The amount of research that went into this sheet and the usual quality of the decal designs and printing make the wait well worth it and I highly recommend it. For modellers interested in the AFC or are just looking for some nice options to finish your Camel and SE5a kits in, no disappointment will be found with the Harry Cobby decal sheet. My sincere thanks to Rowan and Sabine at Pheon Decals for the review sample. Now, time to hurry up with my current builds so that the build of Cobby's striking black and white checkered Camel can hit the bench!