Announced at Scale Model World in 2019 and just released at the end of August 2020, Aviattic has provided the WWI modelling community with a 1/32 German aircraft hangar made from laser cut plywood and MDF. Aviattic is producing the kits on demand, so there may be a brief wait before a new item ordered is shipped.

There were multiple styles of hangars used throughout the war that show up in many photographs. This particular hangar is a common German design with a flat, rearward sloping roof for one single-engined aircraft. The same hangar design was often expanded to accommodate multiple aircraft, including a 4-aircraft version of this same design clearly shown at Boistrancourt during the famous photo lineup of colourful Jasta 5 Albatros D.Vs in 1917.

It's a fairly large item, but not as large as I was expecting it to be (in other words, I won't be getting divorced this month!). The base measures 50.5 x 40cm (19.8 x 15.75 inches) while the hangar itself is 33w x 32d x 15h (centimeters) which translates to a little under 13 x 13 x 6 inches. There is additional width to the base, necessary as some buildings used external diagonal support beams. The additional length allows for your model to be displayed outside the building or at a minimum, provides sufficient room for the 4 central doors of the hangar to be posed open. The four center doors of this hangar design hinged downward to form a wooden platform at the opening of the hangar while the two outermost doors were swung outwards.

To give a better idea of the size, the photo below of the Junkers D.I shows the plane posed on the base as though it were centered inside the hangar with the propeller facing outwards. The photo of the Pfalz in front of the built hangar was borrowed from Aviattic's website with permission. 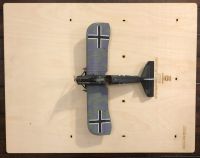 The hangar came to me flat-packed in a sturdy shipping box, well padded with bubble wrap with no damage after its trans-Atlantic voyage. The product itself does not come in a box as one would not be practical for such an item. The set includes plywood and MDF parts as well as a small fret of photo-etched brass, a length of brass rod and sheet of clear acetate.

The MDF and plywood sheets come in several thicknesses: 1.5mm ply for the wooden plank walls, roof, doors, and hangar floor, 4mm ply for the base, and 2mm and 3mm MDF for the internal wooden frames. An acetate sheet provided which allows the builder to make clear windows, while the PE fret includes two light shades and all of the door hinges. The brass rod must be cut to length to represent the hinge barrel for each hinge, and it's recommended that the rod be scored several times to add realism to the hinge as well. 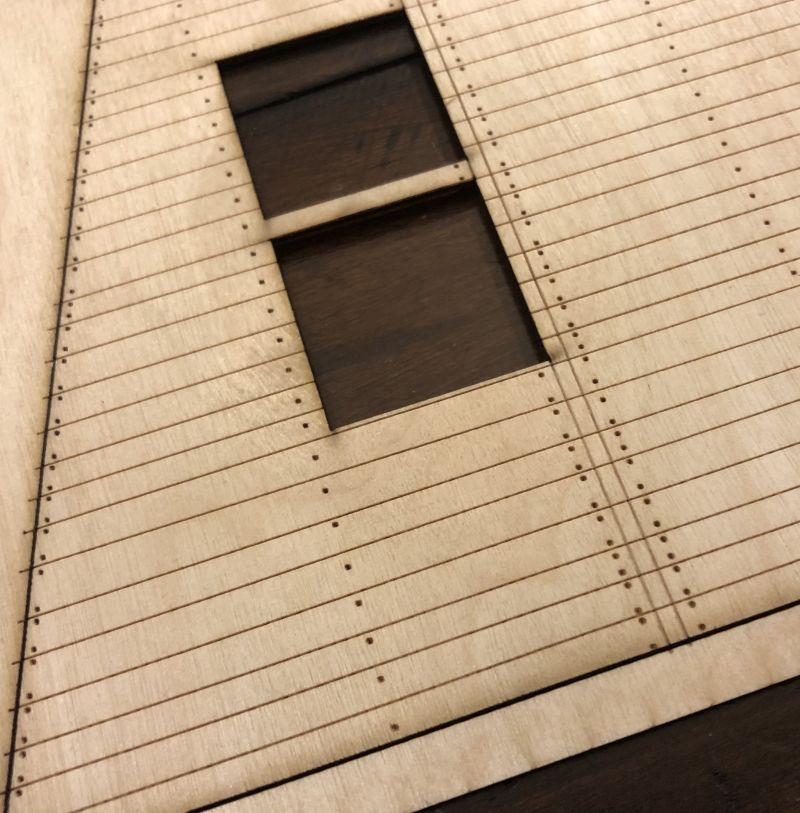 I'm blown away. This is not an inexpensive item but the thought that Richard (of Aviattic) and Tim Perry put into the design really is evident when looking over the parts for the first time. Not only does each plywood and MDF sheet state the thickness of the sheet to help in identifying correct parts, but the plywood sheets even state this on both sides and whether you're looking at the front or back of the sheet. This is important as there is a great deal of wooden plank and nail detail designed into the front of the plywood pieces which are the outside walls of the hangar. The back of the plywood pieces - those surfaces that will face the inside of the hangar - also feature wooden plank detail but not nail details. Internal nail detail is not present on the internal planks as those will be covered by the building frames coming from the MDF sheets.

Looking closely at the parts, some clever features have been designed in. Nail details are added in as mentioned previously, both single and double nails will be noticed across the wooden planks of the walls. Small triangles have been cut out of the wood/MDF sheet surrounding the parts so that it's very easy for the builder to see where the parts must be cut to remove them. There are window frames provided in multiple layers to approximate true scale thickness. I was puzzled by the horizontal lines running along the outside faces of the side walls beneath the window cut-outs, but upon examination of the instructions these are to help locate an external beam correctly which I had missed the first time I looked over everything. A lot of these are details that could easily be overlooked by a design team less dedicated to scale realism.

In order to speed up delivery of my hangar to write this review, I asked Richard at Aviattic to provide a PDF of the assembly instructions. The rest of the kits shipped will have a 4-page printed instruction booklet. The instructions are as clear as daylight with diagrams and text at each step of the way.

Each thickness of plywood or MDF is assigned a different colour and all parts from that "sprue" are depicted in the same colour throughout the instructions for clarity. Additional scrap diagrams are included with helpful notes to help with aligning the frames to the walls so that all parts line up correctly as assembly progresses. Mention is also given to alternate ways to complete the roof if the builder wishes to show corrugated metal or oil cloth-covered structures in place of the wooden roof. This is a nice touch to help differentiate hangars as there were variations in the roofs and walls. The placement of the optional external diagonal support beams is also shown should the builder wish to use these.

At £185 plus postage (which may be pricey as it's not a light item), the hangar will certainly not be within everyone's budget, but those who do purchase one will not be disappointed. I ordered mine the moment it was announced by Aviattic and am absolutely delighted by the product. The kit is very thoughtfully designed based on available historical documentation and as mentioned above the laser-cut and photo etch parts are flawless. Instructions are so clear that even my clumsy self will have no difficulty with the assembly. Very enthusiastically, I recommend Aviattic's hangar kit. The hangar is available directly from Aviattic. 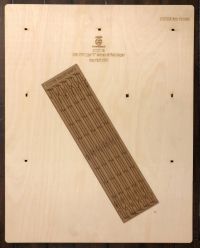 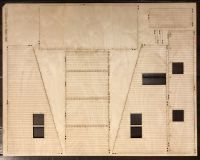 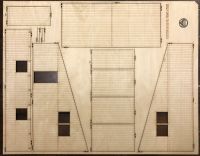 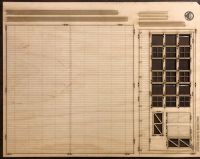 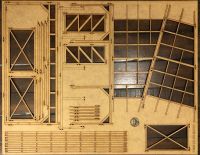 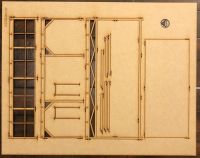