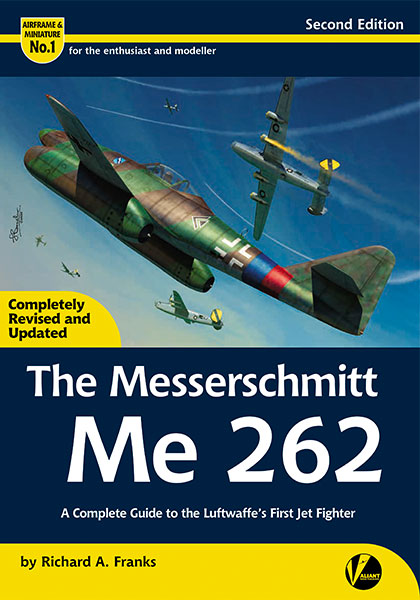 UK publisher Valiant Wings Publishing has released a Second Edition of Airframe & Miniature 1, The Messerschmitt Me 262: A Complete Guide to The Luftwaffe's First Jet Fighter. The author is Richard Franks, and the illustrations are shared between Richard Caruana, Jacek Jackiewicz, and Juraj Jankovic. The terrific cover art is by Jerry Boucher.

This second edition has been expanded to a 208 pages, plus a new gatefold section of 1/48 scale drawings. It's extremely well printed on quality glossy paper, and the reproduction of all drawings and photographs is first-class. 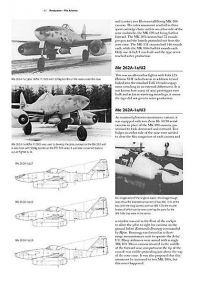 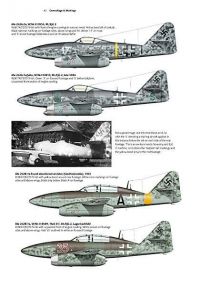 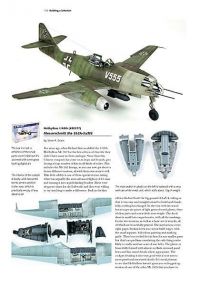 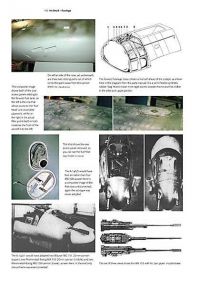 While not mentioned in the table of contents, the Preface weighs in at a substantial 32 pages , and describes a potted history of the Me 262, which provides useful support for the subsequent technical information.

The sequence of chapters covering the evolution of the airframe spans 36 pages, and consists of brief summaries supported by crisply-rendered greyscale profile drawings. They are clear and easy to follow, and form a handy guide for discerning what features distinguished which variants.

The Camouflage & Markings section covers a relatively brief 21 pages, and includes a handy four-view stencil placement guide. According to the Publisher's Note at the beginning of the book, the colour profile drawings in this second edition are all new.

Rather than a dedicated section for the colour profiles, they are instead interspersed throughout the text as necessary. They are by Richard Caruana as usual, and are very nicely rendered indeed. A set of profiles for aircraft in foreign service (or evaluation) is also provided.

Chapter 6 features a series of descriptions of the commonly available Me 262 model kits. In 1/32 scale, the Trumpeter and new-tool Revell A & B series kits all receive extensive coverage, while the older Revell and Hasegawa kits are left on the sidelines.

The modelling section features four kit builds, comprising the 1/72 Airfix Me 262B-1a/U1 by Libor Jekl, the HobbyBoss 1/48 Me 262A-2a/U2 by Steve Evans, and the 1/32 Revell new-tool Me 262B-1/U-1, also by Steve Evans. As far as I can tell, these builds are all new to this second edition. Each is extremely well done, and will serve as inspiration and guidance for our own Me 262 builds when we get to them.

There's an additional two-page Rogue's Gallery section that shows an image or two of a more extensive selection of builds by Richard Franks and Steve Evans, some of which were featured in the first edition.

Chapter 8 is called Building a Collection, and features a series of annotated isometric 3D line drawings by Jacek Jackiewicz, with additional artwork for the second edition supplied by Juraj Jankovic. These are designed to illustrate the salient differences between the various prototype and pre-production airframes as the series developed, and form a perfect companion to the earlier 'evolution' chapters. They're in a somewhat different style to more recent volumes from Valiant Wings, which is merely reflective of the evolution in style from this publisher since this first Airframe & Miniature volume was published.

A nice addition to this section is a series of notes alongside each drawing explaining how best to go about representing that particular version in kit form. While they're hardly comprehensive, they do at least provide something of a starting point. I hope to see Valiant Wings continue this initiative in subsequent publications!

Chapter 9, In Detail, features an extensive selections of photographs and diagrams, including a series of walkaround detail photos of surviving airframes. The walkaround photos have been selected with a modeller's eye, which is not only welcome, but very handy. The Me 262 A and B are both covered, along with the Czech Avia S.92 and CS.92 airframes.

At the very back of the book, secured inside the rear cover, is a set of 1/48 scale plans in gatefold format. These are printed on heavy, non-glossy plain stock, and cover the following airframes:

These are drawn by Richard Caruana and look very nicely done. Only the Me 262A-1a and Me 262B-1a airframes are given full four-view treatment. The other listed types are shown as fuselage profile views, which is sufficient to elucidate the pertinent differences in most cases.

Not being an Me 262 expert, I can't give a considered evaluation of the accuracy or veracity of the text itself, and so will leave that to more knowledgeable readers. All other elements of the book ooze quality however, from the clear photography to the beautiful profiles and the detailed scale plans. Contemporary photographs are plentiful and very nicely reproduced. The addition of scale plans, new kit builds, and all-new colour profiles for this second edition make it a useful purchase even if you already have the first edition. Overall it's an impressive attempt to be the Complete Guide the title alludes to. Recommended!