I’ve always liked the Sopwith Pup, it looks sleeker than the Camel has better proportions than many of its contemporaries and it figured heavily as the mount of air Ace heroes in the pulp comics I read as a kid.The Sopwith Pup, as described by the words of the late aviation historian Jack Bruce: ‘In all of aviation’s ever lengthening history, few aircraft have inspired in their pilots more affection, and fewer still have been written about with more nostalgic warmth by those that knew them, than the Sopwith Pup’. Testimonial indeed to an aircraft which when pitted against its rivals was lacking in engine power and armament, but through its finer handling often had the edge in those formative years of aerial combat. 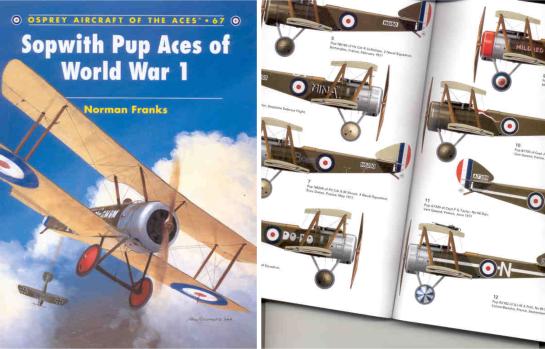 The Pup was the outcome of the development of a personal transport built in 1915 for Harry Hawker, Sopwith’s chief test pilot and was to become the first British single seat fighter to see widespread use on the Western Front.

Norman Franks’ book, like his previous Sopwith (Aircraft of the Aces 62) title is a very readable account of the service history of the type. Unlike the ‘tripe hound’, the Pup did see service with both the RNAS and RFC but the majority of units were Royal Naval Air Service Squadrons that used the Pup, due in part to Sopwith being a Royal Navy contractor.

The narrative, through log books and recollections of aviators long since past, give these first tentative steps in aerial warfare a sense of excitement. The impression of the ever present fear and possibility of imminent death is also never far away, conveyed by the poignancy of images of flyers who didn’t survive the conflict. The chapter breakdown is by unit rather than chronological operational use, highlighting how the Pup initially started operational life with the Naval Squadrons in 1916 and progressed to being used by Royal Flying Corps units. The Pup rapidly became obsolete as a first line fighter and was outdated by the end of 1917 by faster, more deadly opponents in the race for air superiority over the nightmare that was the Western Front.

Mark Postlethwaites’ excellent cover art illustrates Arthur Gould-Lee’s first victory over a Albatros DIII and captures the Pup well, the perspective harks back to my boyhood memories of the Victor comic, with a victorious Pup banking away after dispatching his prey I wonder if Mr Postlethwaite has similar influences?…

Likewise Harry Dempsey, according to the Osprey press spiel has been interested in WWI subjects for over thirty years and has illustrated all of Osprey’s WWI titles to date. His profile art is lovely to look at and this title would have possibly only benefited from a more diverse selection of Pups. I say this because the type had some colourful examples with a fantastic striped Pup on the title page(including a blue home defence night fighter covered in silver stars, but outside of the remit of this title) plus there are some superb examples illustrated by the photographs in this book. As always the artwork supports and lends colour to a totally monochrome subject from nearly ninety years ago and that is rapidly disappearing into the mists of time. A 1:48 four view scale drawing which looks computer generated is included but there is no credit to the illustrator and I have no data to check its accuracy or stated scale.

If you have an interest in early aviation then there is much to commend this book. The Sopwith Pup is an attractive, simple aircraft, and one that belongs to a small selection of aircraft such as the Spitfire which inherently ‘look right’. Great War aviation is long due a large scale modelling renaissance and the Pup is a prime candidate for a new kit. This book could provide the impetus to inspire a manufacturer to ‘dip their toes’ into the WWI water.

This book is an absorbing read and an insight into the early days of aerial warfare. Supported by a selection of vintage photos and the artwork, it is well worth having in your collection.