The Sopwith Triplane, hardly a household name yet it was this aircraft that inspired Anthony Fokker to plagiarise a successful design in response to KoGenLuft demand for a German triplane. This is testimony to the design’s overwhelming superiority over German aircraft of the day but perhaps it also lacked a certain cavalry officer pilot and a scarlet colour scheme to give it that status of immortality. 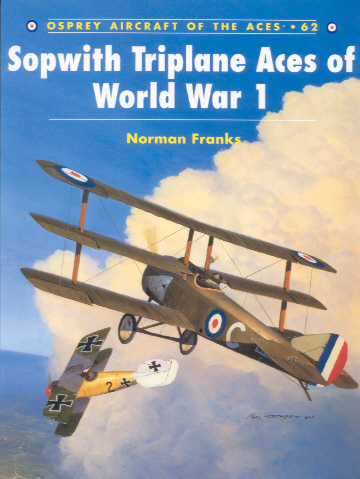 Similarity between the two designs end with the triplane layout (indeed the DrI is technically a four wing aircraft) and whereas the Sopwith design was a good natured aircraft even being able to be trimmed for hands off flying and gentle in the stall, the DrI was a twitchy, unforgiving beast. But both shared phenomenal rates of climb and manoeuvrability and as recounted in this book, the Sopwith Triplane had a far greater impact on the aerial war than has previously been acknowledged.

Norman Franks’ book is a very readable account of the service history of the type which exclusively served with Royal Naval Air Service units. The RFC did order the type but with delivery of the SPAD VII, it was decided that all triplanes would go to RNAS units. The book also highlights the fact that these units were in the main manned by Commonwealth pilots from Australia and Canada. The narrative through log books and recollections bring these characters some of whom are indeed larger than life, back to life. Mark Postlethwaites excellent cover art illustrates one such character, Roderick Dallas DSC and his engagement with an Albatros. Dallas’ log account of the engagement adds drama to Mark’s painting with the entry:

“Big scrap- met the travelling circus – and (Tom) Culling, my valiant comrade in the air, went with me into a formation of 14 of them. We revved around and counter attacked so to speak, and in the general mix up Culling got one and I got two”.

The chapter breakdown is by RNAS unit rather than chronological operational use which makes sense from a point of view of the source material. Images are surprisingly large and in the past I’ve criticised these titles for the size of the photographs. In this instance it’s possibly down to the originals being on glass plates rather than film, affording a larger format to take initial copies from?

As always the artwork supports and lends colour to a totally monochrome subject and Harry Dempsey’s profiles are no exception, including 36 profiles and six planform drawings. His love of WWI subjects is evident in the standard of all his work featured in Osprey’s WWI titles.

Mark Styling’s scale drawings capture the simplicity of the type but are erroneously labelled up as being 1:32 when they appear to be closer to 1:48. I don’t have data to measure the drawings but as a comparison, I overlaid a Hobbycraft Nieuport 17 which being a small aircraft of similar vintage gave an indication that the stated scale was incorrect.

Apart from the scale typo, there is much to commend this book for those with a passing interest in WWI Allied subjects. I suspect that Sopwith enthusiasts will find little new here and to be honest the likelihood of a large scale Tripehound coming our way is remote, although if any manufacturers are looking in…

Nonetheless this is an absorbing read and an insight into the early days of aerial warfare. Supported by a selection of vintage photos and the artwork, it is well worth having a look at.