It was quite some time back that my build of a Revell MiG-21 SPS came to a grinding halt when I looked at the kits cockpit. I pretty soon realized that the Revell offering was based on pretty much pure fiction. So after having a little rant to my friend over the phone he suggested that I try the CAM Revell Mig21 pit.

How bad is the Revell pit? Is it worth changing?

The standard kit cockpit tub has two throttle quadrants, one on each side for what is meant to be a single-engined plane. One for left-handers and one for right-handers I suppose. Once the kits ejection seat is installed the throttles are located to the side and rear of bang seat so that only Mr Elastic from the Fantastic Four could ever reach them. The decal sheet of instruments is about 20% larger than the panel and you'll need Radu Brinzan's Shrink-O-Matic to get it anywhere near fitting. Other than that, well it's fine.

Then again, as a friend pointed out to me, I was evaluating the Revell pit and failing to consider that the moulds were probably made when I was a child and the cold war was still in full swing. He suggested that the pursuit of accuracy wasn't such a priority in older kits and it's not like Revell would have had access to good data to go by. Fair points and a humble lesson learnt about unreasonable criticism. 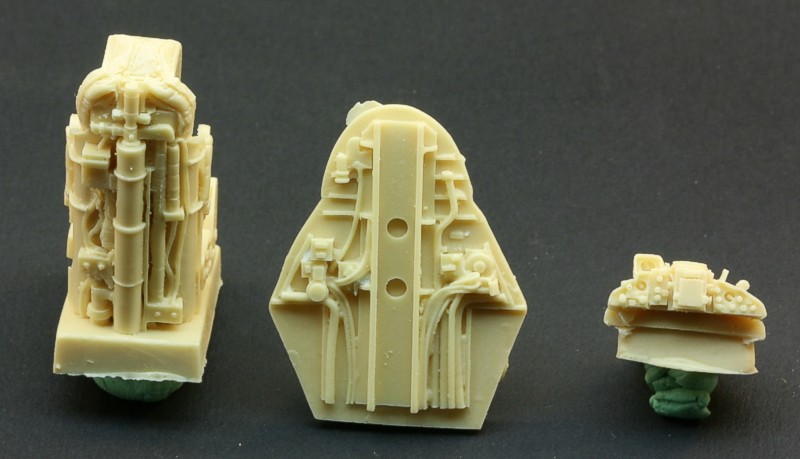 The Cam cockpit is a relatively simple affair that is cast bubble free with a good amount of detail. It appears to be one of their earlier cockpits and whilst the casting is spot on, the masters don't have the fidelity of some of today's more modern resin sets. In fairness though, it's certainly not an expensive set. Incidentally, the first set I had came with a double up on side walls and a few bits missing. These were replaced without any dramas at all by Gordon at Spruebrothers.

Which version of MiG-21?

Whilst the cockpit is labeled for "Revell MiG21", it's probably worth checking your references for which version of the Revell kit you intend to make. The Revell kits are sold in a variety of markings and versions reflecting the long service life of this iconic plane and model kit. Even though the cockpit set is labeled for a Fishbed, with a little research you'll find there are been a variety of different models/upgrades to the Fishbed classification which have sometimes resulted in instrumentation and cockpit changes. The closest match of cockpit I could come up with was for MiG-21MF or MiG-21Bis. Whilst it isn't specified in the CAM instructions Revell does make a MF version of the MiG-21 and I suspect this is the kit that was in mind for the set.

The ejection seat version is that of a KM-1M. It's very nicely detailed and with some drybrushing and washes will look incredible. The seat is missing the lower leg supports and if you're keen, these will have to be scratchbuilt. Included is the ASP-PFD optical gun sight and the SSh-45-100 OS Gun Camera. You'll also be able to use a lot of the resin parts if you want to try and make other versions of MiG-21 including some of the trainer versions.

The instruments, control column, sidewall details are all very nice and match closely the reference photos that I'd used. The instructions describe a clear acetate sheet that is meant to be for instruments using a Trumpeter sandwich technique. It could be that this is an error in the instructions themselves. Poor Gordon hunted high and low and even spoke to the people at CAM to try and find me what we thought were missing parts. A decal sheet of Jet instruments from Mike Grant's range might be a good solution for this.

Overall I think this resin cockpit will add a fantastic amount of detail to your Revell MiG-21. Even though some aspects of the masters are not the best that can be done by todays standards its good that CAM still makes the set. It substantially improves the kits OOB cockpit and at a price of around $20 makes it one of the best and affordable resin cockpits around. Perfect for your first attempt at a resin cockpit given the low purchase prices of Revell MiG-21s. I'd recommend it for sure.

I purchased my pit through Sprue Brothers Models, and without reservations I'd encourage you to do the same. I've seen their high standards of customer service often talked about in the various modeling forums and I got to experience it first hand. As a customer, an LSP'er, but also a staffer on the site, I'm glad they are one of our sponsors. Credit where it's due I reckon.