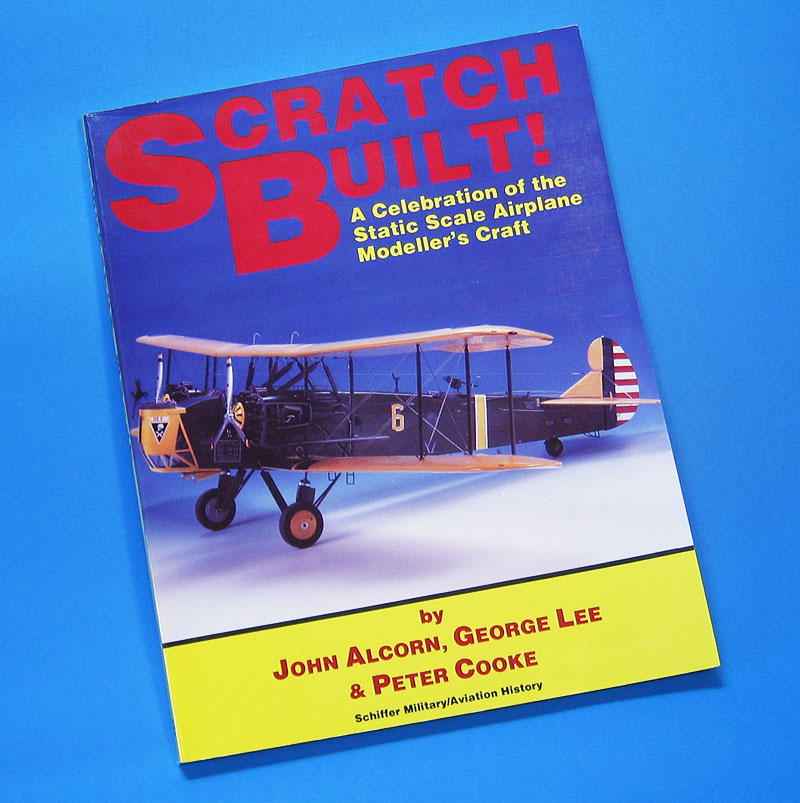 If you ever wanted to know how the pros do scratchbuilt models, this book gives you a good idea. Released in 1993, a second edition followed shortly under a different name, with a significantly different content (we will be reviewing it here soon). The book was finished just after George Lee's passing, making this book one of the rare opportunities to see his masterpieces. He, John Alcorn and Peter Cooke don't need any introduction, I'm sure. But if you have never heard of them, I guess it suffices to say that we are talking about three of the greatest scratchbuilders in plastic modeling history. They are old school fellows: no CNC, stereolithography, or similar modern technologies: just their hands, styrene, metal, usual tools and a lot of tricks. Several no less famous contributors are present in the chapters: Arlo Schroeder, Bob Rice, Bill Bosworth, Paul Budzik (see our interview) and Alan Clark, to name a few. As the title hints, the text describes techniques and tricks on scratchbuilding aircraft. More important (for us), the smallest scale covered in the book is 1/36, making me wonder about a more suitable (again, for us) new title: "Static LSP Modeller's Craft". Who knows in a third edition...

The book is now out of print, given there's a second editon around. But since the contents varies a lot from one to other, I'd say it is worth to have the first edition, too. Let's take a look inside. 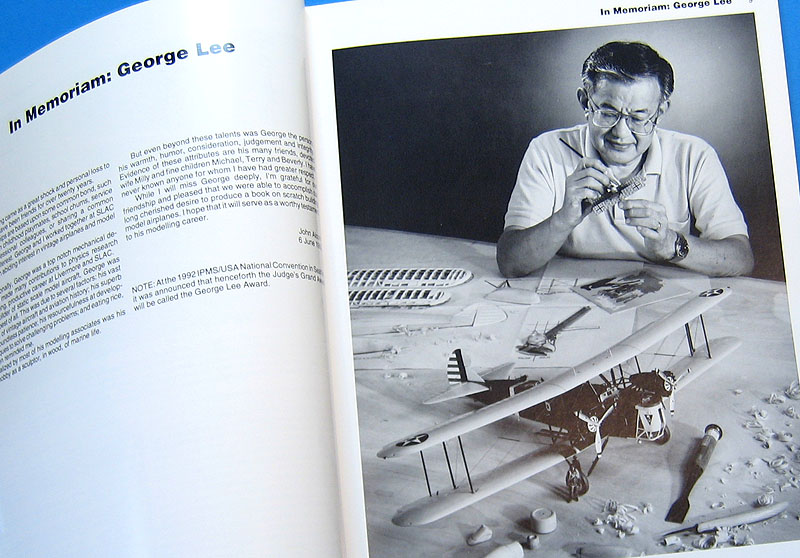 After a dedication to George Lee, the book starts with a short vita of the authors, including old photos to prove they've been around for a while. Needless to say, some of their awards are mentioned in the text. All three have been winning Best of the Show awards on several IPMS conventions, asserting that the methods described in the text are fully developed, tested, and actually deliver magnificent results. Interestingly, there's a photo of John Alcorn and his A-20 in 1/32 which won 1974 IPMS/USA convention (how I wish one of these... injected, please).

This is an interesting chapter, if you want to know where our beloved hobby came from. From the solid wood models, then mixed media (wood+plastic) first releases in mid '50s to all-plastic models, the chapter helps us to understand not the origins of scratchbuilding (which is much older), but of our hobby itself. It even includes a short primer on plastics. 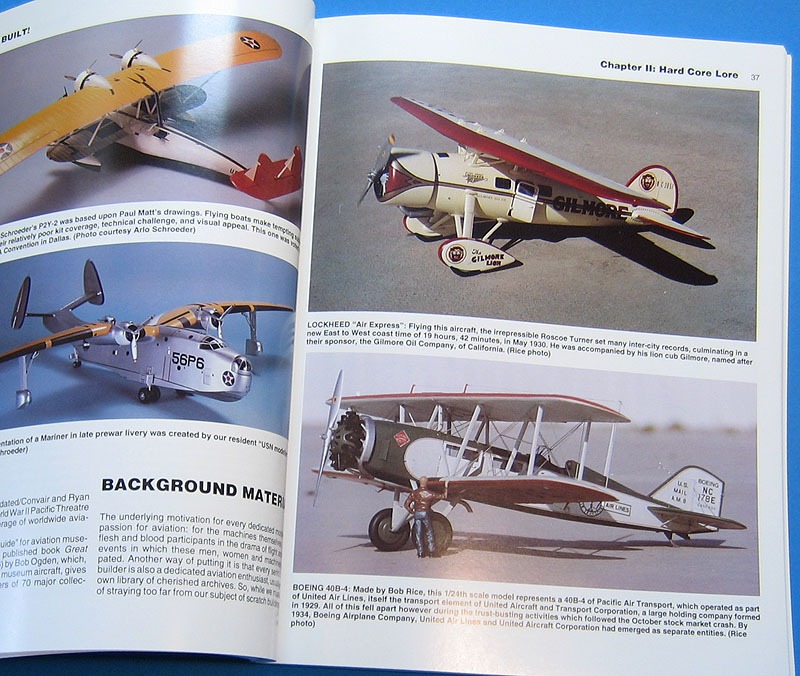 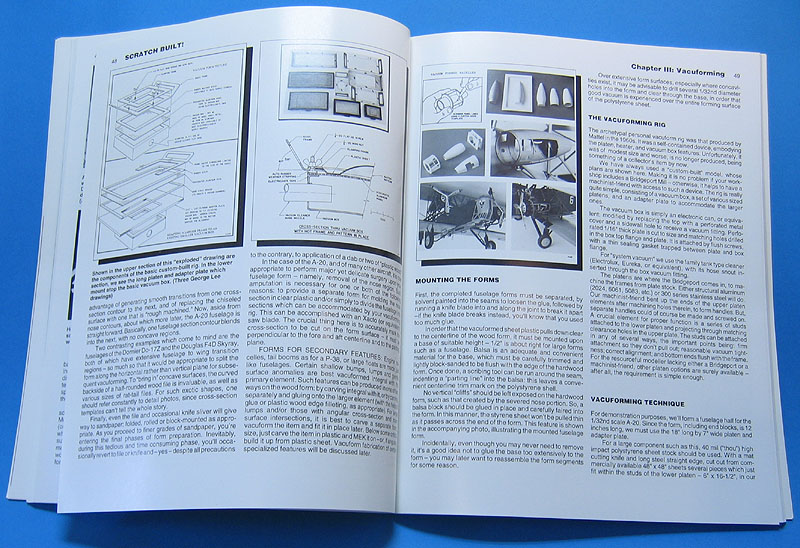 Chapter two basically covers how to get (or to make your own) drawings, the importance of gathering reference material, and archival sources. Not much new for the modeler who do his homework, but some interesting (and ancient) sources are mentioned in the text. Some of them, in my opinion, are still far from being outdated. Models portraited in this chapter include the Consolidated P2Y-2 (Best of the Show in 1976 IPMS/USA) and the Martin PBM-1 Mariner in 1/32 by Arlo Schroeder, the Boeing 40B and the Lockheed Air Express in 1/24 by Bob Rice, an impressive Martin T4M-1 (Best of the Show in 1991 IPMS/USA) by Bob Davies, as well as a B&W photo of Bob Rice's Il'ya Muromets in 1/32 (Best of the Show in 1989 IPMS/USA). Just one or two photos of each, but worth to see and inspire.

A short chapter on the vacumforming basics... But written by the masters. The text here is crammed with B&W (and old, I suspect) photos of vacumforming using the traditional wood core masters, vacuform jig and a vacuum cleaner. George Lee's drawings of a vacuforming jig are small, but very comprehensive (now you know from where I took the tips to build our jig). Reading it carefully, we find many hints hidden between the lines. 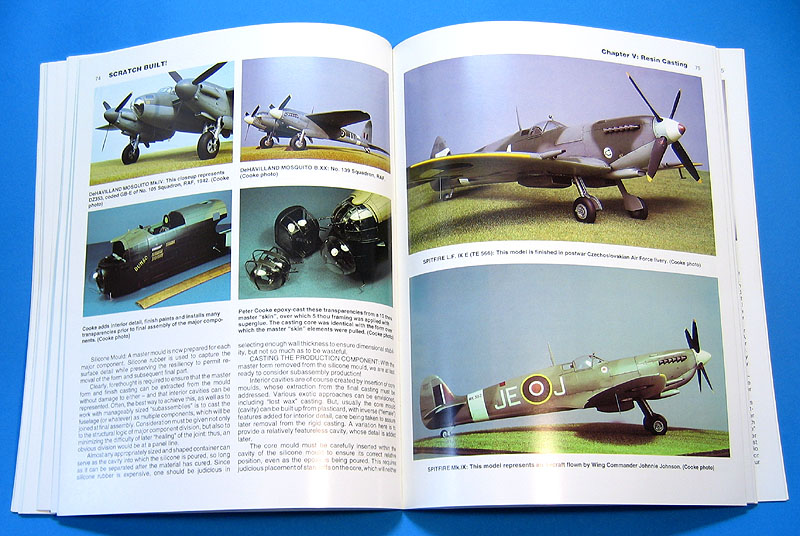 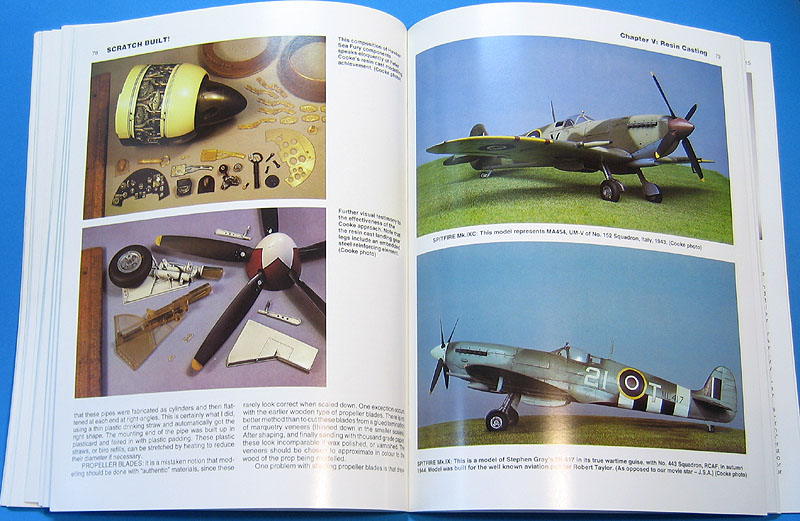 This part of the text is devoted to the internal structure of the models. Something we, ordinary modelers, seldom have to worry about. But in the case of vacuformed models this is an important aspect. A number of approaches are discussed in the text, from shear box type constructions (all-plastic) to basswood core. Most of the photos in this chapter are refering to Alcorn's 1/24 DH9, but the photos of Arlo Schroeder's 1/24 Vought SB2U Vindicator and the 1/36 Napier engined Victoria by Alan Clark (1982 IPMS/USA Most Popular Model and Detail & Scale award) highlight the text. The text also describes a number of techniques to achieve surface details, like rib embossing and fuselage stringers.

A mostly interesting part of the text. Not much for the technique itself, but for the advices about the pros/cons of each type of resin/silicon. I suspect Peter Cooke wrote this chapter, as it is crammed with his "production" models, multiplied in resin from his masters, and incorporating every surface details: fasteners, rivets, bent panels etc. Incredibly realistic, I must say. There are at least four 1/24 Spitfires and some production photos of his 1/24 Lancaster and Sea Fury. Among the casting techniques described in the text, I found his method of casting clear parts from epoxy resin and framing them with plastic quite impressive, from the photos (although I'll never be able to achieve that level of surface finish). 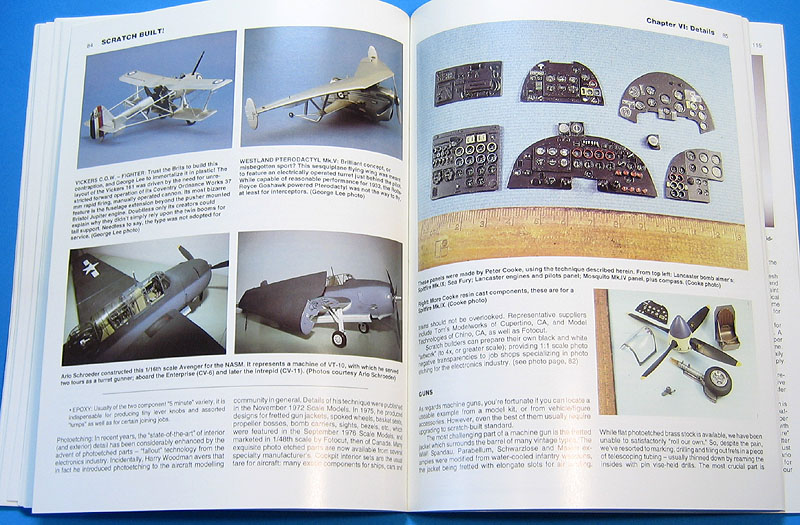 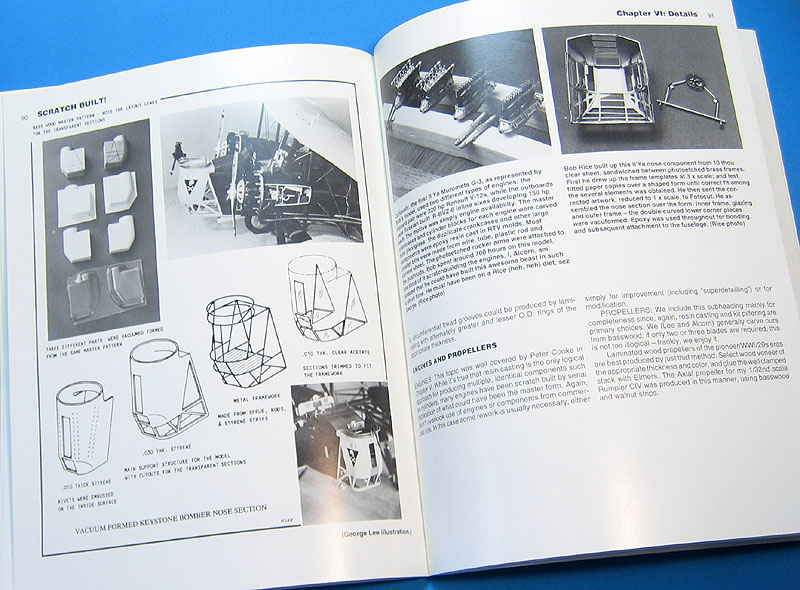 Something of interest to us all. This part of the text talks about making your own drawings for photo-etching, incorporating details from plastic and metals, landing gears, engines, propellers, scribing and riveting. Most of the photos are B&W, showing George Lee's famous Keystone bomber in 1/16 that "Mark Spitzed" the 1988 IPMS/USA convention (by the way, since his passing, the Grand Jury Award is named George Lee's Award in honor to him). The majority of the drawings shown are related to vacuforming - including a wonderful way to make engine louvres and corrugated panels. Interestingly, there's a page showing a 1/72(!) Grumman Wildcat with a scratchbuilt landing gear in metal tubing - and retractable - by Matt Matsushita.

Another short chapter, full of hints on how to assemble your model in order to ensure alignment and integrity. Non-rigged and rigged aircraft are shortly covered. Interesting illustrations include the 1/32 Boeing Air Transport trimotor by Bob Rice, the assembly jig used by George Lee for his Keystone bomber in 1/16, and a photo of President George Bush receiving a 1/32 Avenger scratchbuilt by Arlo Schroeder. That particular model was painted with the markings of the Bu.No.446214, the aircraft piloted by Bush himself during his tour with VT-51 aboard USS San Jacinto. 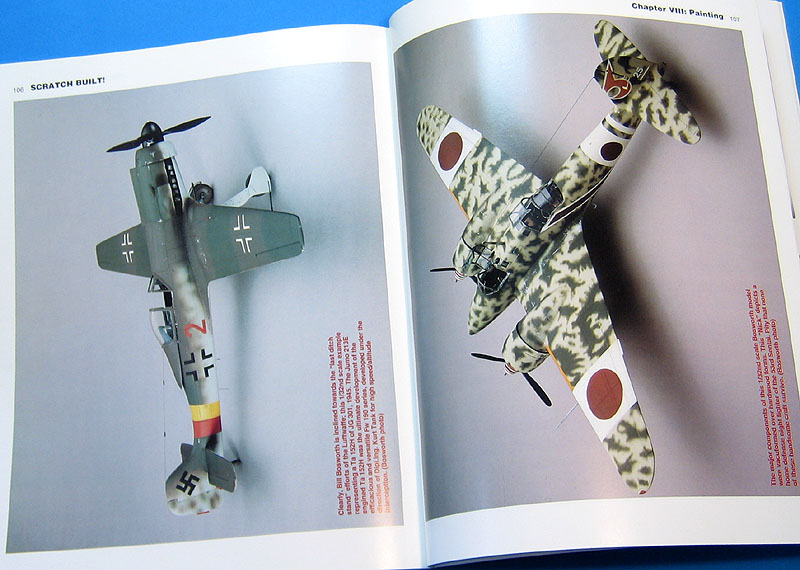 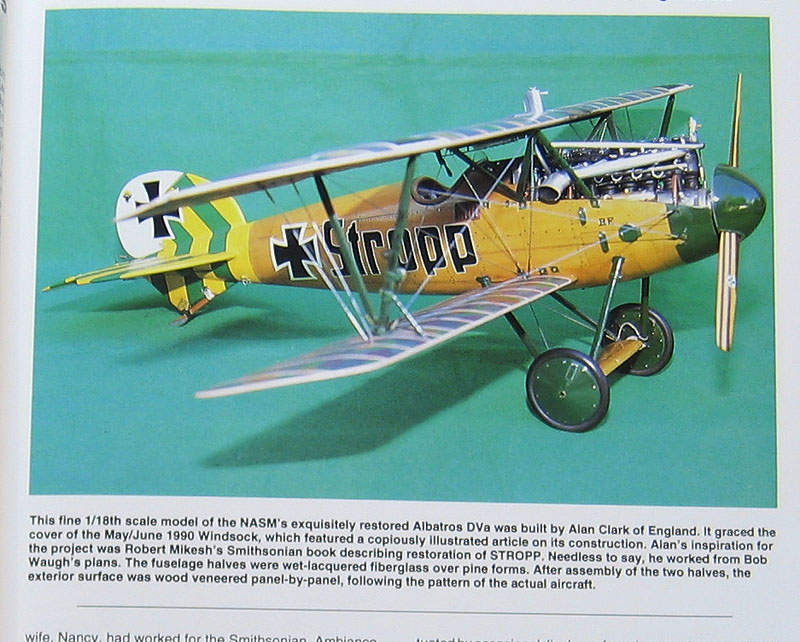 Chapter 8 is a portfolio showing too many beautiful models to be described here. In common, they all are scratchbuilt. Bill Bosworth's and Paul Budzik's relatively recent models deserve attention, as they are beautifully photographed, sometimes displayed in one whole page. The subjects roughly covered here are surface preparation, airbrushing, types of paint, weathering and scale effects.

A one of a kind text: how to make your own markings. The traditional masking method is discussed, but also sink screen methods to make your won decals! Too much for us relis mortalis, but worth the reading. 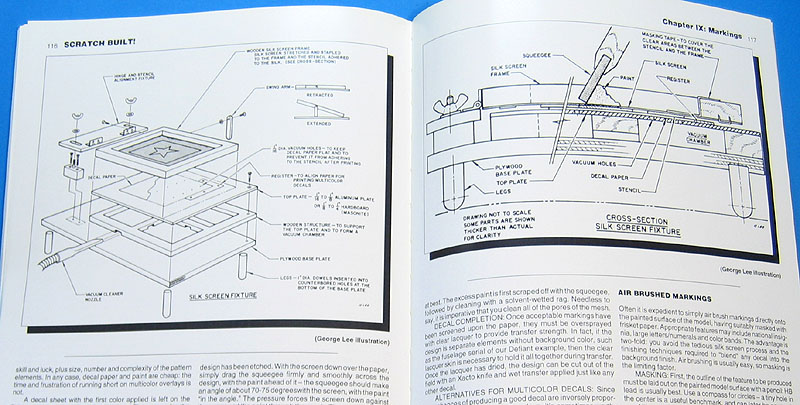 The book finishes with an Epilogue and a one-page postscript entitled Model Portrait Photography.

Well, that's it. The content of this book in many places differs significantly from what we know as plastic modeling. It is related to the wish of some master modelers to build a model not offered by mainstream manufacturers in the desired scale. They actually build a whole model from scratch, and have the skills necessary to do it with museum quality (sometimes spanning a 20 years period). In general this is not our case, I know, but as a by product, many of the methods and techniques described in the book can be used or adapted to our modeling challenges. And in the end, the illustrations will inspire any interested modeler.

A great book on a rare subject. Recommended.