Twobobs Aviation Graphics has just released a number of new 1/32nd scale decals. In this review we will have a closer look at markings for the Trumpeter A-10.

Markings are supplied for two aircraft:

The first subject aircraft will be familiar to many as the severely battle damaged A-10 of Operation Iraqi Freedom flown by Capt. Kim "KC" Campbell of the 75th FS. This was an A-10 assigned to the 74th FS at the time of the incident.

The format of the instructions continues with detailed left and right side views of both A-10's. Larger decal placement information is presented clearly. Some of the smaller stencils are hard to identify and may be difficult to accurately place. Ten small photos are included of the two aircraft. Twobobs supply a listing of available aftermarket items for the A-10. I suggest paying careful attention to the list, as the Trumpeter A-10 is a bit of a mix of variants and there are different resin sets available. 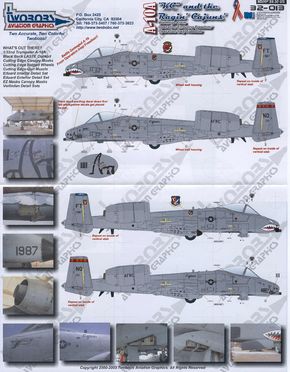 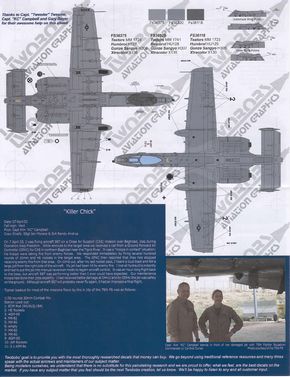 The flip side of the instructions depict top and bottom profiles of the aircraft. Only one profile is shown, as the two aircraft are identical in this regard. Stencil placement is much easier to understand with these views. FS 595b colour chips are included. The three colours are identified in the Testors, Humbrol, Gunze Sangyo and Xtracolor paint lines. It is also important to note that the two aircraft are equipped with the prominent circular GPS antenna on the upper fuselage as supplied by Trumpeter. They are not shown in the profile views.

Completing the instructions is the combat report written by Capt. Kim "KC" Campbell for the final flight of her A-10. This includes a listing of the typical loadout for A-10's of the 75th FS during Operation Iraqi Freedom. Little information is given about the second A-10 on the instructions. However, this is the same aircraft found on sheet 48-054, an A-10 deployed to Bagram, Afghanistan, during Operation Enduring Freedom. 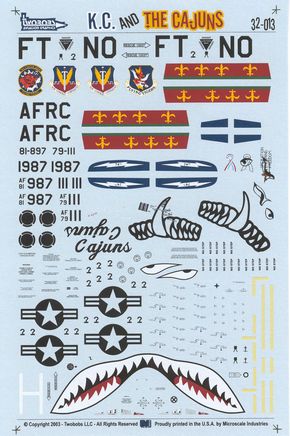 The decals are printed over two pages. A single large page and a small insert (not shown) are included. The decals are printed by Microscale Industries. On my review sample the registration was very good. Bob Sanchez of Twobobs reports that there was some difficulty printing
the decal sheets. The small insert is for the sword in the ACC crest, which had a screen clog during the printing process. This affected some of the sheets but the insert was added to each package. In addition, the number aft of the in-flight refuelling door is identified as 81-897 on the instructions and decal. It should read 81-987, an easy item to correct.