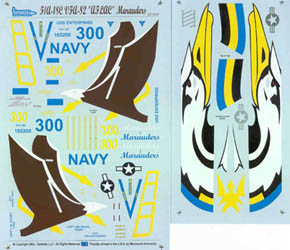 Twobobs Aviation Graphics has released new F/A-18C decals in 1/32nd scale for the "showbird" of VFA-82. This "AFLAC" scheme was applied to BuNo 165200 in May 2004. The markings are designed for use with the Academy F/A-18C Hornet.

Instruction sheets from Twobobs are always large and colorful. These instructions sheets are no exception. It includes all necessary profiles of the aircraft printed in color. Fourteen thumbnail photographs accompany the profiles to further assist the modeler with proper decal placement; a large, colorful photo of the aircraft further supplements these. The instructions depict proper stencil locations, though there are few on this aircraft. FS color chips are provided for the aircraft referenced to Testors, Humbrol, Gunze Sangyo and Xtracolor. It should be noted that no FS color exists for the "Marauder Blue" applied to this aircraft. The instructions state it is close to FS35183. Some paint mixing may be required to match some of the decals.

Microscale prints the decals on two pages. They appear very thin with no visible carrier film. Walkways are not included, though they do come with the Academy kit. I am confident that the decals can be applied with little difficulty. 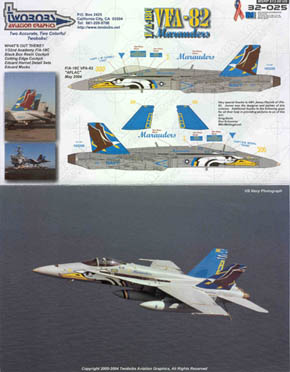 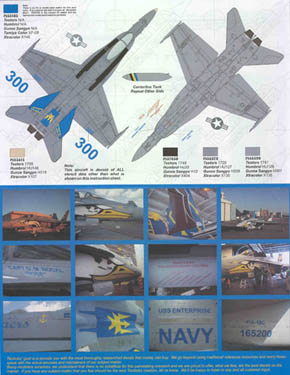 Twobobs received the assistance of AM1 James Ptacnik for the creation of these decals. He is attached to VFA-82 and is credited with designing and painting the actual aircraft. Consequently, I am sure these markings are very accurate.

Twobobs Aviation Graphics supply some of the most accurate decals available for today's military aircraft. In this era of lo-viz schemes, it is nice to see some color re-appearing. These new markings are very striking and will add some color to your F/A-18 Hornet. Modelers insisting in accuracy can also apply these markings knowing they have been researched at the source. I recommend them without hesitation.