Twobobs Aviation Graphics have just released two new decal sheets in 1/32nd scale for an F/A-18C Hornet of VFA-131 Wildcats. These two sheets capture the same aircraft over the period of one year. 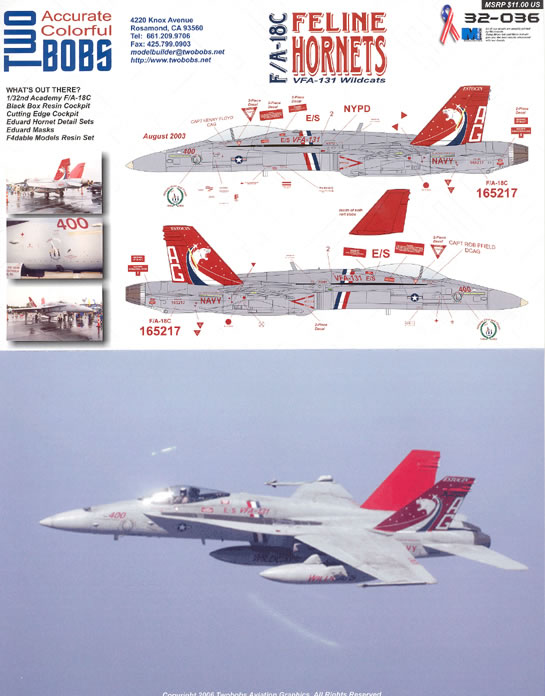 The first sheet depicts an F/A-18C, BuNo 165217 while deployed aboard the USS George Washington, circa August 2003.

Twobobs always supplies some of the best instruction sheets and these new releases are no exception. All pertinent color profiles are provided leaving the modeler with no doubt as to where to apply the decals. Three small thumbnails and a single large photo of the actual aircraft are provided as additional reference material. A complete history of VFA-131 is included, though there are no details applicable to the subject aircraft. 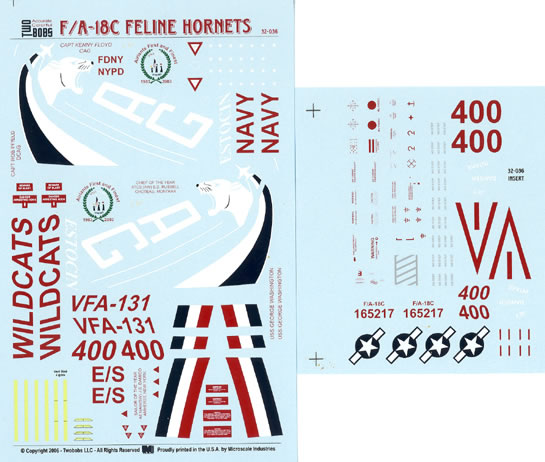 The decals are printed over two pages. All necessary markings, including national insignias and stencils are included. The stars that decorate the tail are individually applied requiring careful studying of the instructions. However, this will eliminate large areas decal film and make for a cleaner finished model.

CAG aircraft are among the most colorful aircraft in the US Navy inventory. This red trimmed Hornet, and the later blue trimmed aircraft reviewed here, should be very popular. Twobobs Aviation Graphics have a solid reputation for providing accurate markings for many of today’s aircraft. I recommend them to anyone looking for quality aftermarket decals.