Fliegerhorst Authentics has released a couple of sets of armament to accompany their new 1/32 Alpha Jet A release. This is the second of them, Set B, which includes two different types of ordnance; LAU 51 A rocket pods, and BL 755 cluster bombs. 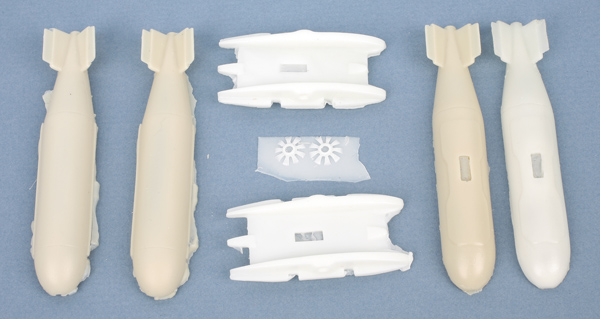 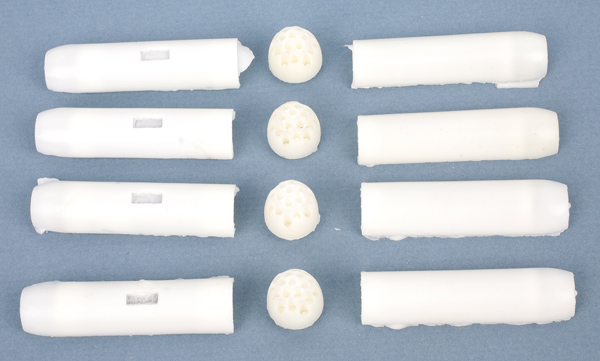 There are two BL 755s included and four LAU 51 A’s included, as well as two bomb racks. Curiously, no decals are included for stencils, even though most would have been the same as Set A. Possibly my set was incomplete? Many of the stencils needed are on the main decal sheet for the Alpha Jet kit, however.

The BL 755 bombs are provided in two halves plus spinners in mostly white resin; a few of the halves are in a tan resin. The rocket pods are in three pieces in the white resin. Casting is OK with few bubbles, although the mating surfaces are pretty rough so expect some work on the seams. The head of the rocket pod is in one piece and is well cast.

The BL 755s appear to be pretty darn correct, with correct fins and detail. The length may be slightly too long, but only about a millimeter, and that could be removed from the tail cone as from the few drawings I found I don’t think it extends as far as provided. Check your references though as I have very little on the BL 755. I could not find any good info on the rocket pods, so I can not confirm the dimensions. They do have the correct 19 rocket openings.

I recommend this set. It includes ordnance not normally found in 1/32nd, and will look good hanging under your Alpha Jet – or other 1/32nd modern jet aircraft.