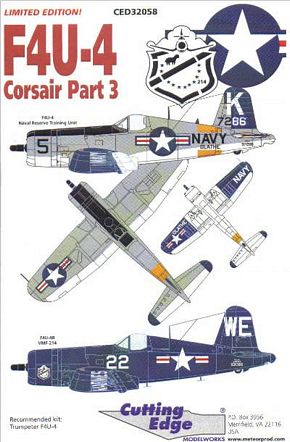 Cutting Edge Modelworks CED32058 provides markings for two F4U-4 Corsairs. Given the lack of kits of this model of the Corsair in 32nd scale, few markings for -4s have been available up to now. In response to the release of the 1/32 Trumpeter F4U-4, Cutting Edge has rectified that situation with the release of the third in a series of decals for this important and attractive variant of the famous bent-wing bird.

The first is for a Naval Reserve F4U-4 from Olathe, KS. The remaining option is for a Marine F4U-4B from a later incarnation of the famous VMF-214. I'm a big VMF-214 fan so I was particularly happy to see one of their aircraft included on this new sheet.

As usual, the decal sheet is crisply printed and in perfect register. Happily, Cutting Edge has provided enough national insignia to do both aircraft. This is a welcomed departure from the second release in this series that permitted the builder to do only one of the two aircraft on the sheet. Bravo to Cutting Edge for giving builders who fancy building more than one F4U-4 the opportunity to decal two birds with one sheet.

A separate instruction sheet is included which provides a brief overview of the aircraft represented. While I am thrilled to see the Olathe Corsair included, I question the color callouts provided for the airplane. I have photos of this aircraft that clearly show dark sea blue upper outer wing panels whereas the instruction sheet shows them as being painted light gull gray. My pictures also show that one elevator was painted dark sea blue while the other was painted white. Both of these are minor discrepancies. Admittedly, my pictures were from a period when the aircraft had been made surplus and awaiting a new owner. It is possible that the markings changed from the operational time period of the reference photos used by Cutting Edge. I only point it out since I do have photos of the exact airplane. The different elevators clearly could be the result of a swap out from a different airplane but I suspect that if the bottom of the outer wings was dark blue, then the tops were as well. Ultimately, the builder will have to decide.

NOTE: The armament configuration for the F4U-4B was different from the standard F4U-4. It consisted of two 20mm cannon in each wing as opposed to the normal three .50 caliber machine guns. This is noted in the instruction sheet, however, the builder should consult detailed reference material as the location of shell ejection ports and ammunition access doors differed between the two airplane types. It will require a fair amount of work to make the necessary modifications. Hopefully, Cutting Edge will come out with a conversion set to take care of these modifications (hint, hint #2 Dave!) Builders should also be aware that the windscreen changed from a curved to a flat center panel at some point in the F4U-4 production run. If total accuracy is desired, a check of bureau number ranges to identify the flat windscreen Corsairs will need to be performed and further conversion work done, if necessary. (My pictures of #7286 suggest that this airplane may have had a flat center panel in the windscreen.) Ultimate Corsair guru Joe Hegedus has also informed me that the VMF-214 F4U-4Bs had a bulged spine and taller canopy similar to that on the F4U-5. Again, check those references if total accuracy is your bag.

The instructions and decals come packaged in the customary zip lock bag.

All in all this release provides some exciting alternatives to the kit decals in the recommended Trumpeter F4U-4 kit and carries on the Cutting Edge tradition of superior quality.

I would like to thank Meteor Productions for the review copy.