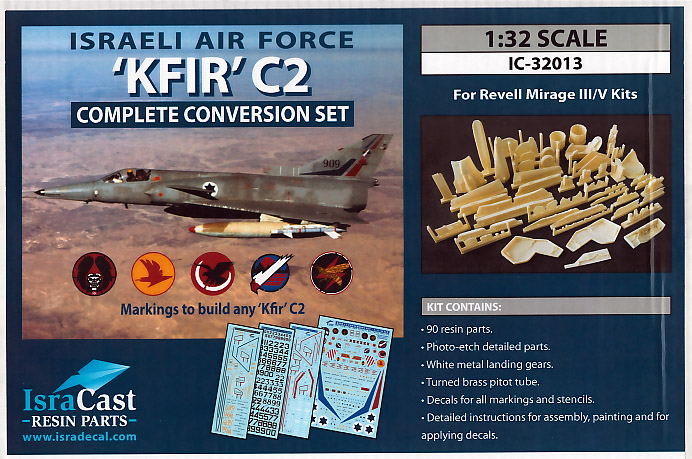 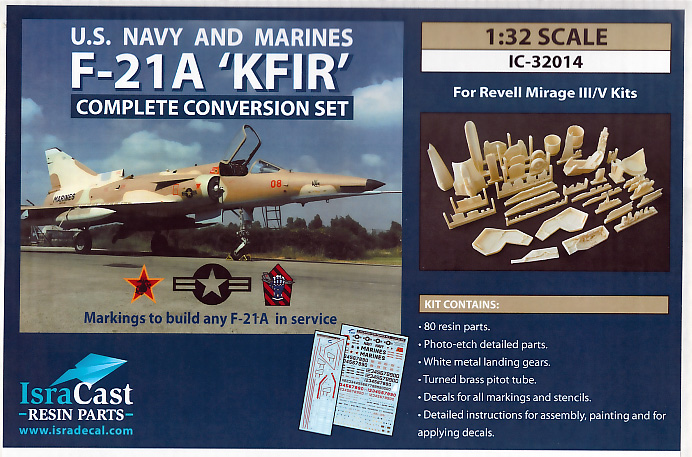 The latest conversion from the IsraCast people for 1/32nd scale are two conversions for the old Revell Mirage IIIE or V series of kits. The first, #32013, is the IAI Kfir C2 conversion set. The second, #32014, converts the Revell kit to the US Navy & Marines F21A Kfir, which the Israelis leased to the US to be used as adversarial aircraft for Topgun training in the 1980s. Both conversions include a generous set of decals. I will review these two sets together as they are very similar.

Both conversions include a new cockpit made up of 14 resin parts plus about another 7 PE parts, including a very nicely done Martin Baker Mk. 6 seat with belts molded in. The nose gear well is made up of two parts with very well done wiring and plumbing molded in. Two white metal parts make up the new landing gear itself with much better detail than the old kit parts, capped off with new resin 3-part nose gear doors. Unfortunately, the modeler is supposed to use the kit nose wheel. The main gear bays are also completely replaced with new resin parts, with new white metal landing gear and a new full set of resin doors, made up from 3 pieces of resin each side. One side note, the instructions show the doors all dropped, but like the P-51 or Mirage, under power the inner doors would be up. They appear to lose pressure and drop apparently after sitting for awhile. If you look at pictures of the Kfir (IsraDecal´s "IAI Kfir in IAF Service´" by Ra´anan Weiss & Shlomo Aloni being the best I have seen), you will see examples of both conditions. 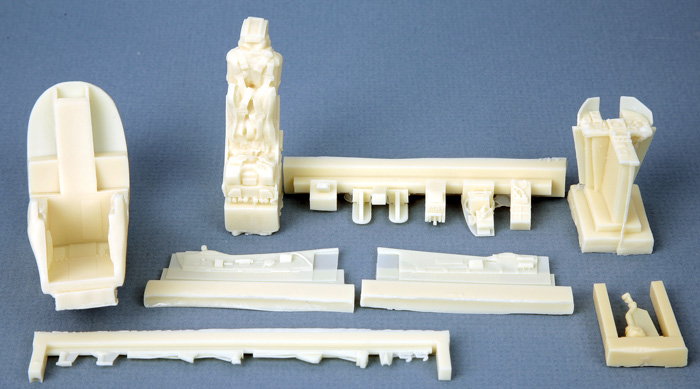 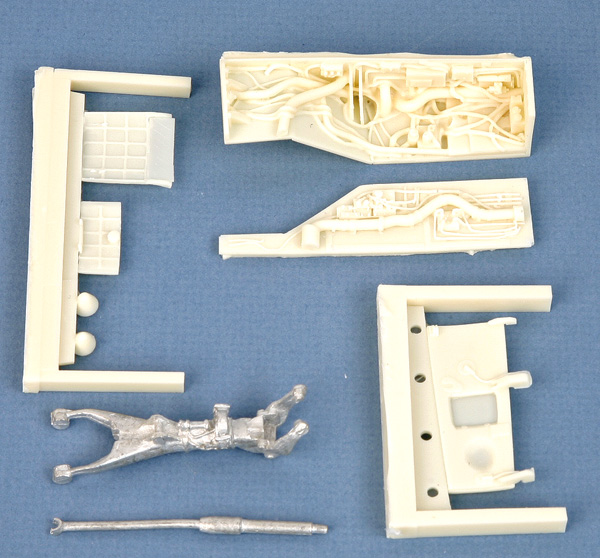 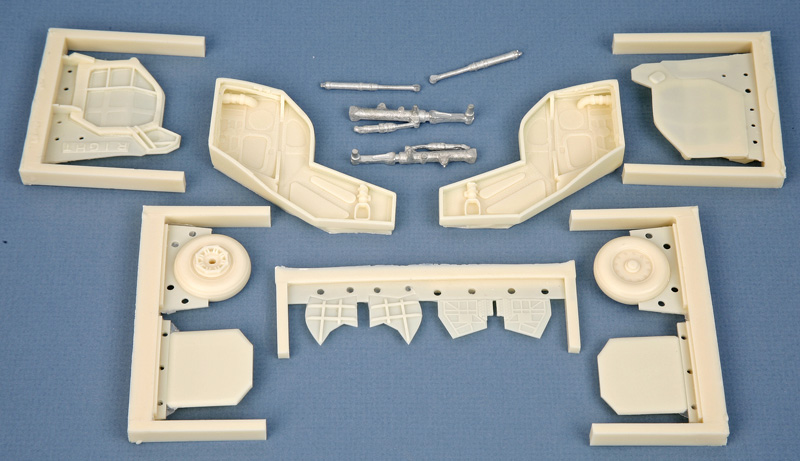 Other common parts include a new Doppler radar housing for under the nose, a slew of antennae, grills and vents for the fuselage, and a new inlet for the base of the vertical stabilizer. A length of half-round rod is also provided for making an external wiring duct for alongside the starboard side of the fuselage. The wings get new outer pylons. Two part 50s are provided which I am sure are launch rail adapters for the outer pylons although no mention is made of them in the instructions of either set. Also included is a small etched fret containing the afterburner ring, some cockpit details, landing gear door details, and details for the two cannon. Last but not least are two really nice turned brass parts for the pitot tube and the spike alongside the nose (for a remote power supply maybe?). All the resin castings are crisply cast, with no air bubbles I could find. Some of the pour blocks will take some work to remove without damaging the part, but nothing too out of the ordinary. Instructions are black and white copies in mostly a photographic layout with parts shown in place. A nice touch is several pages of walk-around photos to help with details of landing gear, wheel wells, and for the C-2 pics of the centerline pylon. A few pics of the instrument panel and ejection seat are also provided. Unfortunately, interior color callouts are few. What is also missing is a good set of layout drawings for re-scribing the Revell kit as the Kfir has some differing panel lines. And with all the work adding the new pieces in addition to all the filling and sanding the Revell kit requires, most all of the original raised panel lines and details are going to be missing! The aforementioned book on the Kfir has a very good set of drawings however. 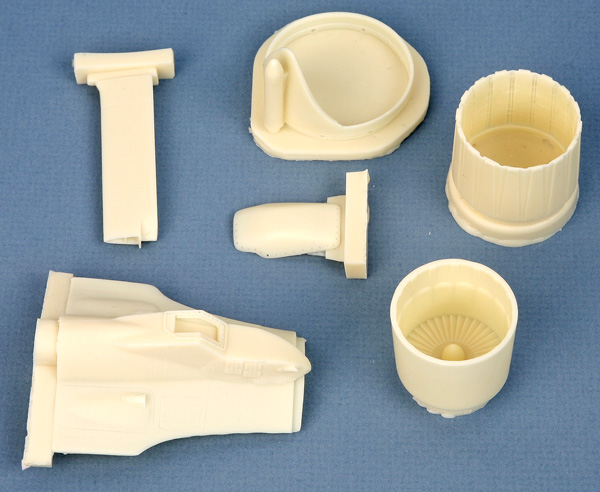 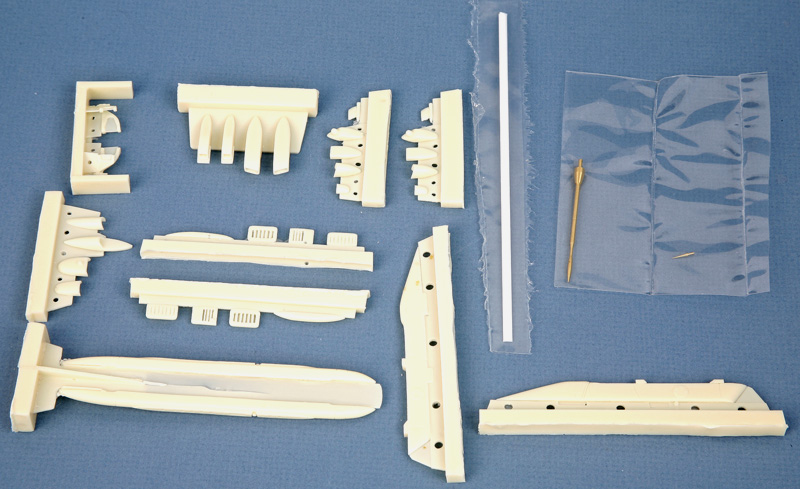 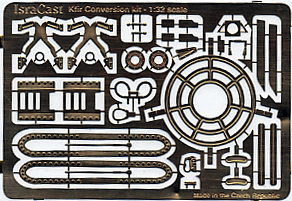 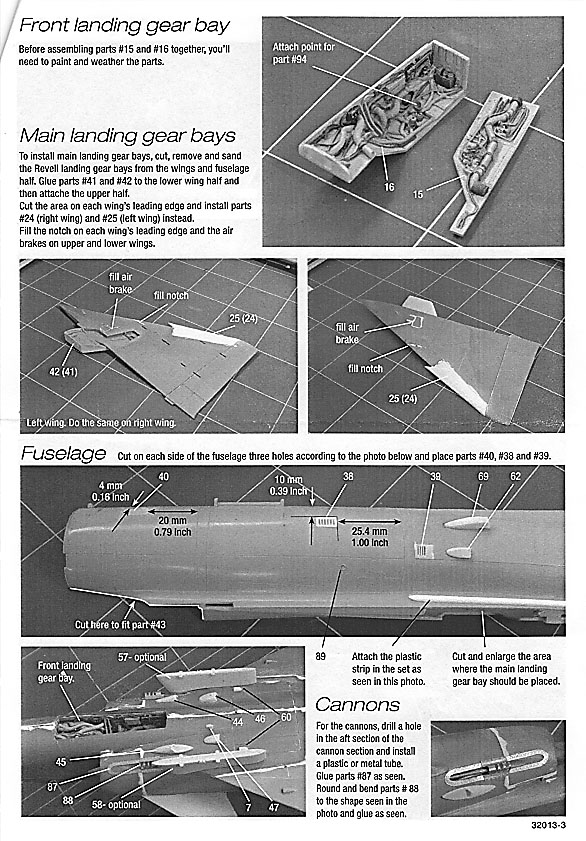 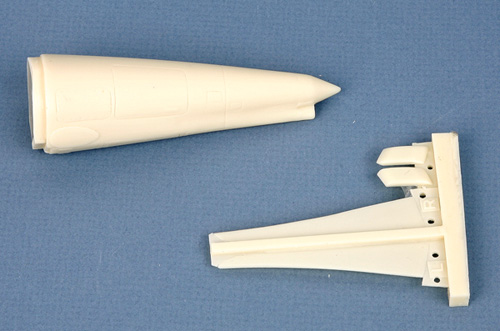 The F-21A conversion includes the above parts, plus several other resin parts. These include a new nose with correct early details. It also includes the smaller canards of the late first production aircraft, and a pair of sensors for each side of the vertical stabilizer. Note that while the front page of the instructions mentions the inclusion of pylons and fins to fit the Revell drop tanks only the fins are included; there are no pylons provided. Another note: it appears some of the antenna and other bits and bobs are for later aircraft and maybe should not be used. Other small items may need to be added. Careful examination of photos of the aircraft you are modeling would be a good idea. What is nice about this set is since it includes the same PE set as the C-2, it also has all the detail for the cannon. Therefore it is a pretty simple matter to use the conversion to build a late original Kfir. The main change would be to find or create one´s own markings. If you do decide to build one of the F-21A´s, however, this conversion set includes decals for both US Navy and Marine F-21´s. The decal instructions show profiles for the US Marines F-21A #01, #03 and #06 in three different camo schemes, plus F-21A #02 for the US Navy. If you have pics of a different aircraft you want to do, IsraCast provides number decals in 6 different styles as well as a good selection of stencils. Note there is not any ordnance included in the set. This is not really a problem as you see very little ordnance carried by the F-21s, though sometimes drop tanks are seen. If you wish to build a Kfir, various ordnance is available separately from IsraCast. 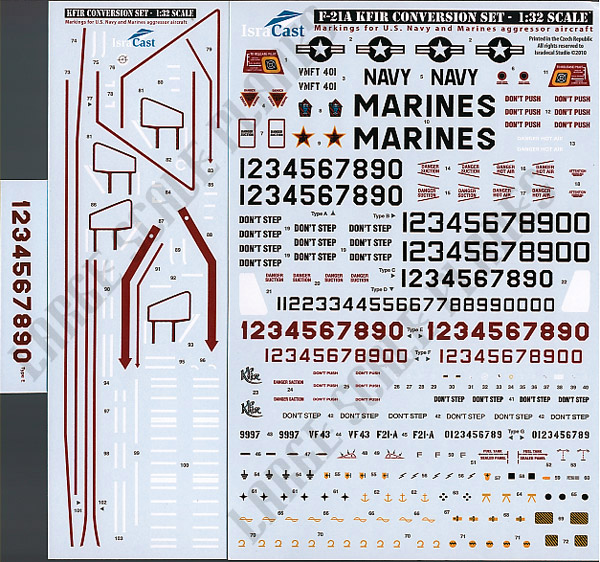 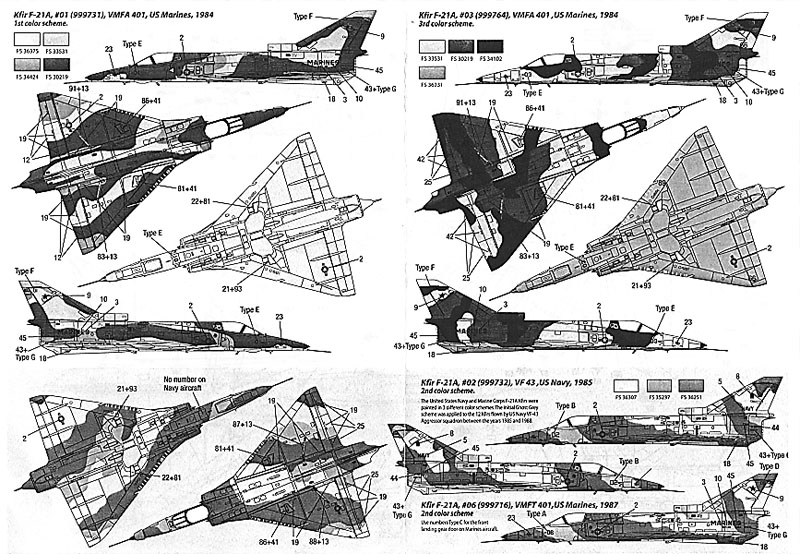 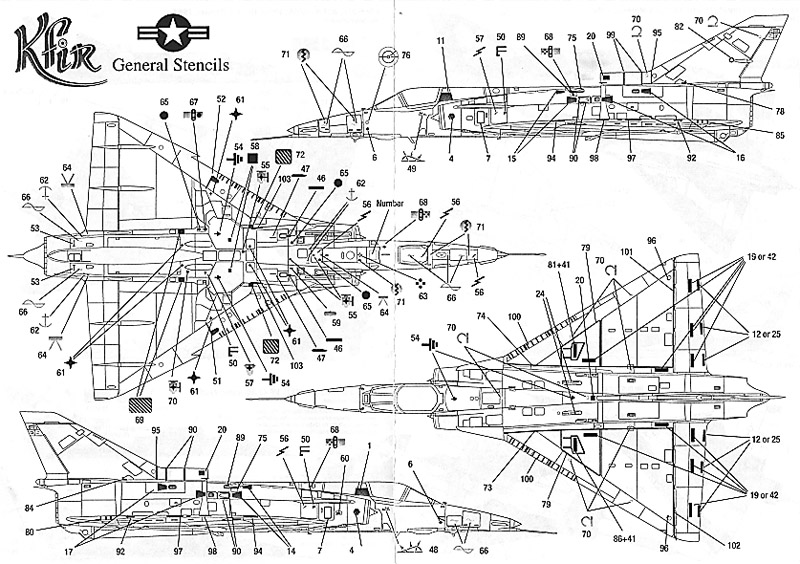 The other conversion offered by IsraCast allows us to create a Kfir C-2 from the old Revell kit. The C-2 is an upgraded Kfir with the addition of a larger canard combined with a new dogtooth in the outer wing. These changes allowed for added load-carrying capability so provisions for additional pylons were added. Upgrades in avionics were also made. 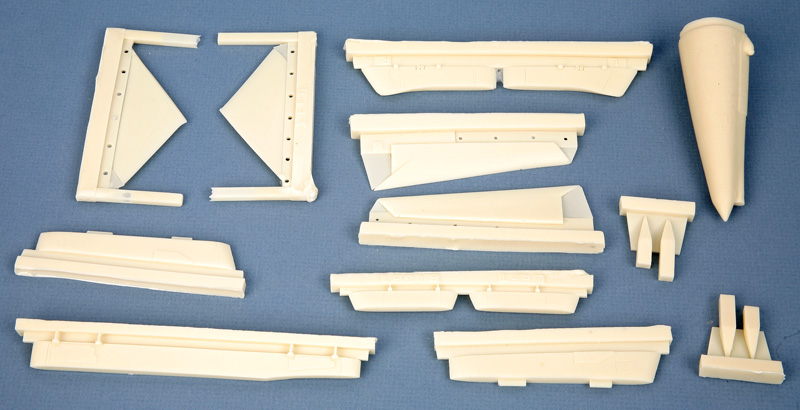 In addition to the common parts listed above, this set includes the nose with the later sensors, the larger canards of the C-2, the new dogtooth for the wings (which correctly adds wing area to the outer wing, unlike the old TAC Scale/CAM set which would have you remove wing area from the inner wing area), an additional 7 pylons and later sensors for the vertical stabilizer. Additional flare and chaff dispensers are also provided for the long centerline pylon if used. This set does include new pylons and tailfins for the kit drop tanks.

Markings are included for a slew of IAF aircraft. These include aircraft from The First Fighters Sqn, The Smashing Parrot Sqn., The Avara Guardians Sqn., and The Valley Sqn. Most are in the superiority grey scheme, although one aircraft, the Smashing Parrot Sqn. Aircraft #820 is in a late camouflage scheme. Some of the aircraft depicted though are depicted later in their career (1989) and which should probably have the later Mk.10 ejection seat(MB Mk.10´s were starting to be used in Kfir C-2s in 1981). Unfortunately, only the Mk.6 seat is provided so the modeler would have to find his own. Again, check reference photos for the aircraft you wish to model for specific antenna and fittings for accuracy. Again, no missiles or bombs are provided so you must either fin or purchase so some from the spares stash me from IsraCast. 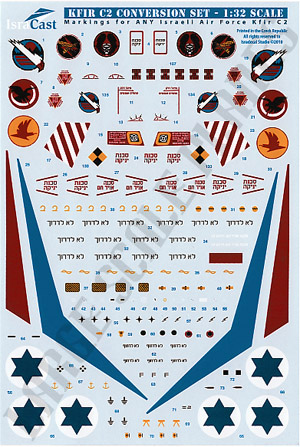 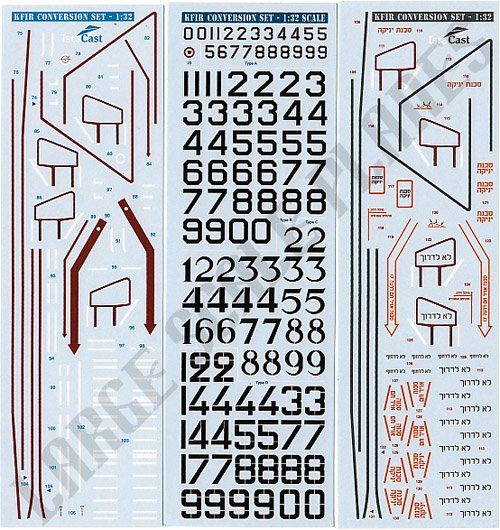 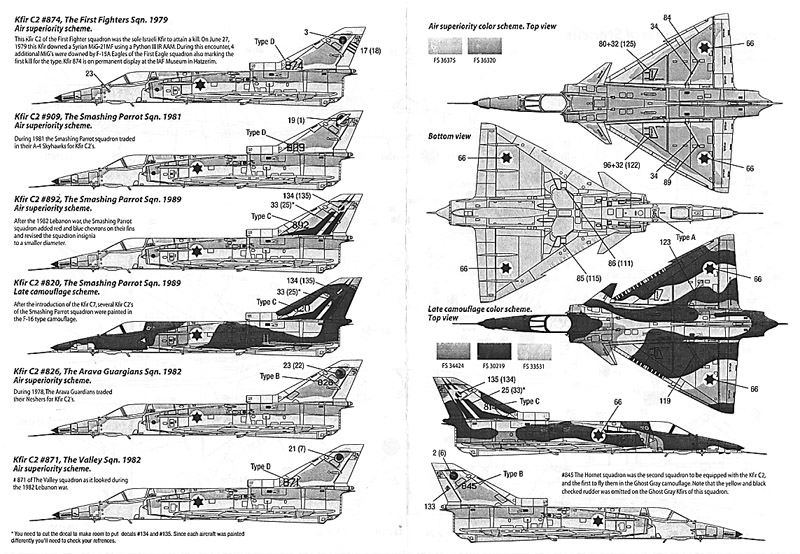 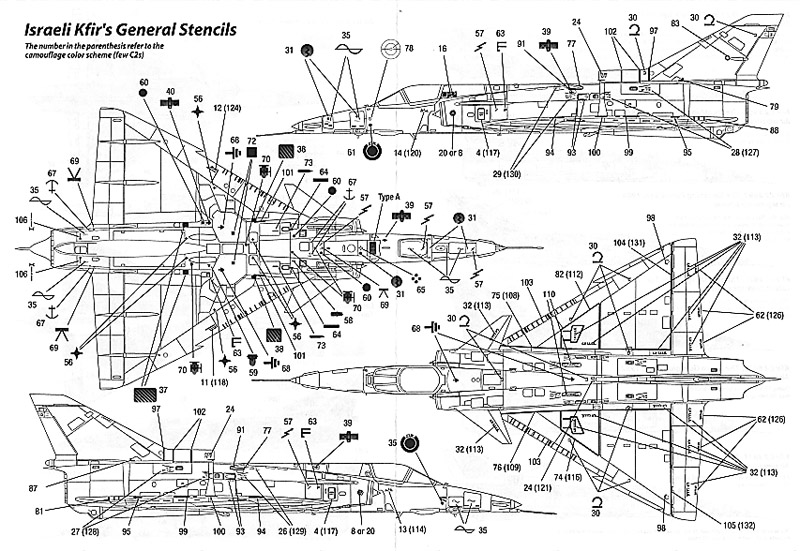 It is possible to use this set to create a C-7 with a bit of scratch detail work to the exterior, and some changes to the cockpit (including that Mk.10 seat!) possibly with the help of the old CAM set. I have a sneaking hunch we could see a separate C-7 set from IsraCast, but only time will tell.

In summary, I am very excited to see some attention given to the old Revell kit. With this set, and a bit of work, a very nice model can be the result. I still would love to see a new-tool Mirage, though!!