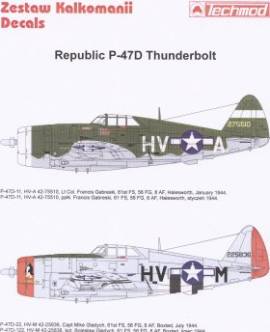 Techmod's new release of 2 sheets for the Revell 1/32 Thunderbolt are a welcome addition to a pretty dry selection available for large scale Jugs. Although there are two new sheets for Thunderbolts from Techmod, this review focuses only on one. Having never seen a Techmod Decal set prior to this review, I can honestly say I am more than pleasantly surprised. The only drawback I can see from this dual release is that all aircraft represented (in both sets) are 56th FG ships. With two new sheets this seems a bit myopic, but we can only hope it's the tip of a new iceberg with a variety of ships and squads to follow.

One sheet of decals and three high-gloss instruction sheets are supplied in the set. The overall quality is very high, and register was perfect on the sheet I received. Decals and directions for the placement of all the stencils used on the P-47 D-11are included as well as beautifully rendered national insignia and all the markings for the two aircraft in focus. Crisp and clear, all decals are finely detailed and under the magnifying glass the level of craftsmanship really starts to shine, more on this in a moment. 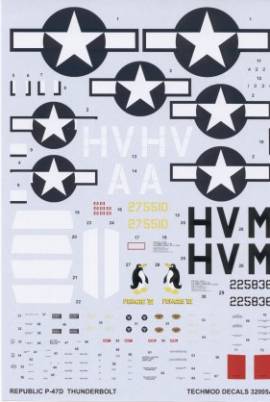 The two ships offered in this set represent Boxted-based 56thFG 61stFS Razorbacks as they appeared in January of 1944. The first one is the OD/Gray D-11 "HV A" that Lt Col. Francis Gabreski flew prior to delivery of his most famous D-25 Bubbletop (which he fowled-in and crashed in Germany on his last mission of WWII). His D-11 gets much less attention as it is a more subdued scheme, and hats off to Techmod for finally bringing this scheme to a top-quality decal sheet for 1/32. This is the ship that "Gabby" rode the longest. He scored 10 kills and 2 damaged in this D-11, and as it is shown in the instructions, it still has the white recognition stripes on. This ship was repainted (not re-marked) with the 61st's Red cowl band and Rudder later in '44 and all stripes were removed.

The decals for the second aircraft portray Capt. Mike Gladych's natural metal-finished D-11 "HV M" during the same January. Mike and a few other Polish pilots were "corralled" by Gabby to join the 56th when they complained to him in late '43 that the American squads were getting all the action. Gladych and his cohorts were still flying for the RAF at the time and stuck in the relatively short-legged Spitfire. Somehow this crazy maneuver was pulled off, and Polish pilots, on loan to the RAF, flew and fought with the USAAF, with no pay from any government! The pilots of the 61st actually passed a hat around on payday, and got the Polish fighters some drinking money every month. 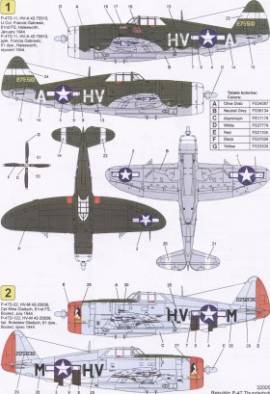 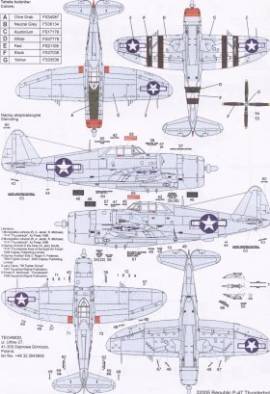 Some points on the detail level in this set should be mentioned. Every stencil is clearly readable under the magnifying glass, and yes I mean every one. The set looks well researched and as accurate as they come, fonts and markings are all accurate in size and color. The full color Hamilton as well as Curtiss stencils and logos are one of the set's high points, again, fully legible under the magnifying glass. The Thunderbolt used both types of props, and for Techmod to include logos for both is quite thoughtful. The set includes the white recognition bands for the OD ship's tail and stabilizers, however the band on the nose is left to the modeler to reconnoiter. This seems to be the set's only shortcoming simply because if the modeler wants to match "whites", it will require holding off on final painting of the cowling until the decals are applied to the tail and an accurate match can be made. Most folks might choose to paint all the bands on anyway, and this would render the point moot.

As stated, this is my first view of Techmod's decal offerings, and right off the bat I like them. The decals are quite thin, have great register and superior detail. Here you can see the kill markings for Gabby's Jug in perfect register and with the nice added touch of the aircraft type stenciled beside the kill flags. 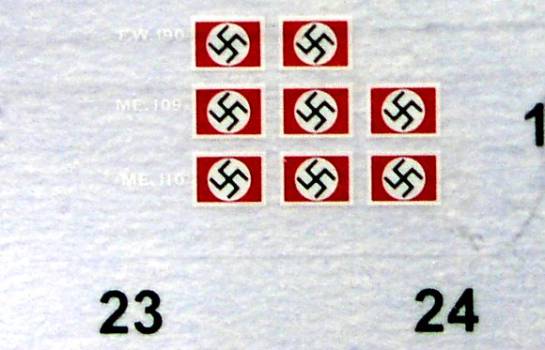 I would highly recommend this set for anyone doing a Revell Razorback who is interested in the ships portrayed. No news that I know of is available on future Techmod releases in 1/32, but with their large catalogue of 1/48 decal sets, one can only hope for some more "trading up" from them soon.