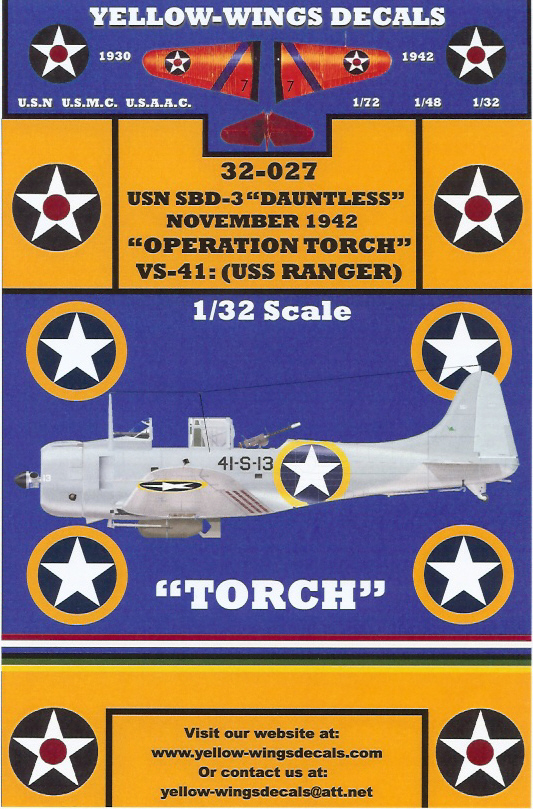 This is the recent decal set by Yellow Wing Decals which specializes in pre-war and early war decals. It provides decals for a single aircraft, #06624, that was found on the bottom of Lake Michigan during its use as a training aircraft. During restoration, it was found to have been used in the Operation Torch landings in North Africa. This decal set provides schemes for both its colors during Operation Torch, and at its time of demise as a training aircraft at Glenview Naval Air Station near Chicago. 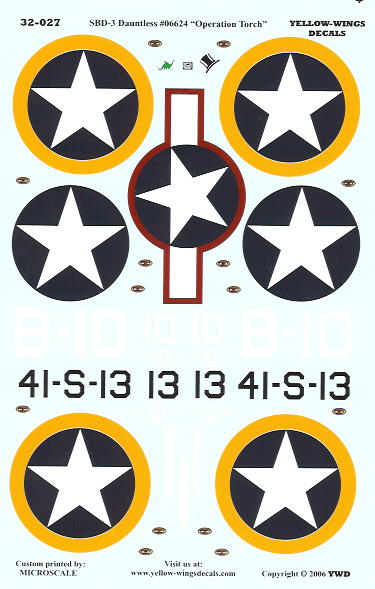 The decals provide national insignia for both schemes, as well as fuselage codes, Bureau number, branch of service, model type, plus some typical stencil data, including prop logos and strips for wingtips in orange-yellow. This aircraft also was adorned with the Top Hat logo, and a small dinosaur on the port side of the tail, both provided. The decals are printed by Microscale, are in very good register, and appear to be on very thin decal film with fine clear film borders. 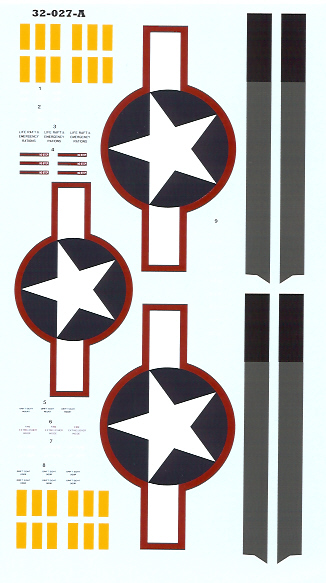 As far as accuracy, the decals appear to be very well done. My number one resource for this review is "The Official Monogram US Navy & Marine Corps Aircraft Color Guide; Volume 2: 1940-1949. According to the book, aircraft codes are to be written in block style, width approximately 3/4 the height, with a stroke of 1/6 the height. For this aircraft(in its Torch colors) the height is 12", so the width would be 'approximately' 9" and stroke 2". Yellow Wing Decals provides codes as 12" high, 8.5" wide with a 2" stroke, I believe this to be perfectly acceptable.

The other data and stenciling is all 1" high per standard, with 6" small numbers for the upper cowl and additional 12" codes for the wing. The codes for the trainer version are in white and also meet Naval specs.

The national insignia for the training aircraft are in the short-lived, red-bordered star and bars style used from June 28 to July 31, 1943. They are correct in size and style, but looked odd to me as the Insignia Red seemed quite dark against the Insignia Blue. It is a good match for FS 11136, which is listed as the FS595 standard for Insignia Red - maybe a touch too brownish, but very close. Something was wrong. If you look at color pictures of the red-bordered insignia, such as on page 72 of the Monogram book, the red is clearly much brighter. Even on black and white pictures, the red looks a lot lighter than the insignia blue. I pulled out my other decals from Yellow Wings and all the Insignia Reds matched, but they DID look a little dark, it just wasn't as noticeable on the red circle inside the white star. I went to the chips in the Monogram book as well as my copy of the FS595 chips and made an interesting discovery. While the later Insignia Red, dating from the post-war era, was a good match for FS595 11136, the chips Monogram provides for early war aircraft using the ANA system, Insignia Red 619, appears to be a brighter color, closer to FS595 11120! This color appears to be a much better match to photos also. Interestingly, the Monogram book lists the FS match for ANA 619 as 31136 - the gloss equivalent of 11136 - so I am not sure what the deal is. Did the formulation change slightly from one specification to another? Red does typically fade faster than blue so that may be part of the problem, but the aforementioned figures appear to be a relatively new aircraft with very bright insignia red. We could also be seeing the results of color variation from differing sources of paint. At any rate, I am simply giving my views and am open for other opinions.

The decals are accompanied with three double sided pages of instructions giving a nice history of the aircraft including copies of the aircraft history card, accident report, and some details of the recovery. Also included is the decal layout, and color data. The layout drawings are well done, but no locations are given for the stenciling. Of course, it is uncertain how much stenciling was actually on the aircraft in either sets of markings due to touch up and painting in the field.

In conclusion, this is another very well done decal set, providing decals for a very historic aircraft. I only hope Yellow Wings continues to provide decals for these early fighters as very few others seems to be doing so!