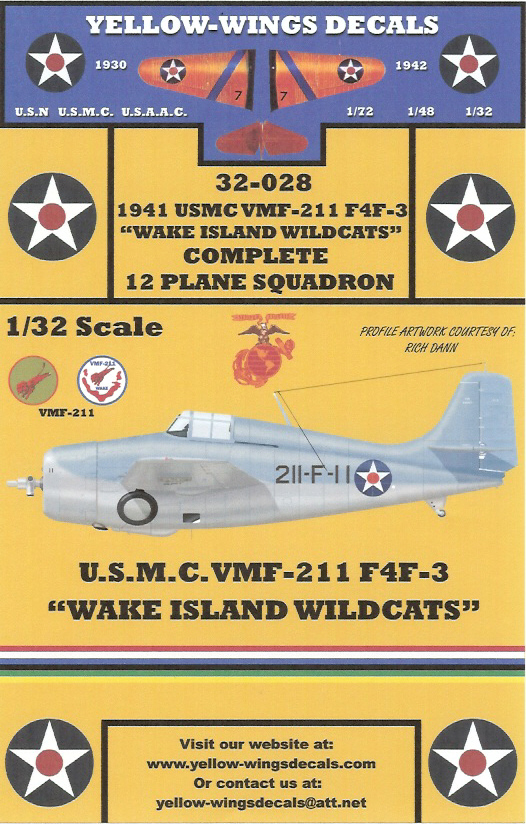 This is the latest decal set by Yellow Wing Decals which specializes in pre-war and early war decals. It provides decals for the entire 12-plane squadron of Wildcats that were delivered to Wake Island before the Japanese attack. 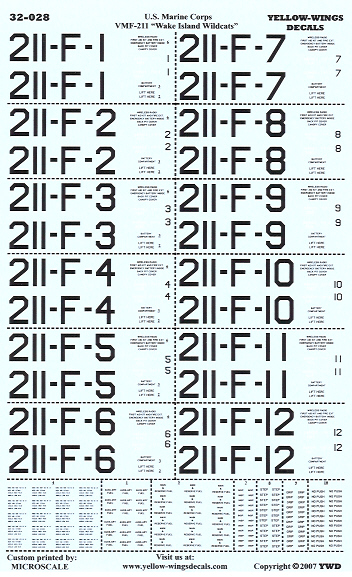 The decals provide enough national insignia for 4 aircraft; fuselage codes and Bureau number, branch of service, and model type for all 12 aircraft; plus multiples of typical stencil data. Tri-color strips are also provided for the prop tips. The decals are printed by Microscale, are in very good register, and appear to be on very thin decal film with fine clear film borders. 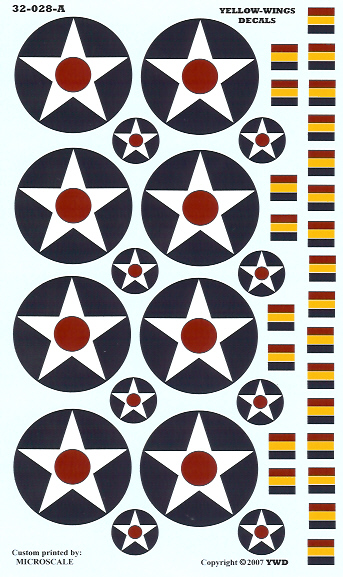 As far as accuracy, the decals appear to be very well done. My number one resource for this review is "The Official Monogram US Navy & Marine Corps Aircraft Color Guide; Volume 2: 1940-1949. According to the book, aircraft codes are to be written in block style, width approximately 3/4 the height, with a stroke of 1/6 the height. For this aircraft the height is 12", so the width would be 'approximately' 9" and stroke 2". Yellow Wing Decals calls for the codes to be 12" high, 8" wide with a 2" stroke and that is exactly what is given. As the width is listed as "approximate" and it could very well be the codes needed to be a little narrower to fit the Wildcat, I believe this to be perfectly acceptable.

The other data and stenciling is all 1" high per standard, with 4" small numbers for the upper cowl.

The national insignia is the correct early style, with 24" diameter insignia for the fuselage and 50" insignia for the wings. The red circle is correctly sized, being tangent to the inner pentagon and not touching the inside corners of the star. My only niggle would be the insignia red looks a little dark, although it is a good match for FS 11136. However see my description of Insignia Red in my review of Yellow Wings Decals #32-027 SBD-3 Operation Torch for more discussion.

The decals are accompanied with two double sided pages of instructions giving a nice history of the aircraft, a list of pilots, decal layout, and color data. I like how they point out the painting of these aircraft. Apparently they were supplied in overall light grey so during the trip to Wake they had their upper sides painted in Blue-Grey. Yellow Wings also points out how photos show the Blue-Grey did not extend over the forward top portion of the cowl, and theorize a tarp was draped over the cowl to protect the engine from the re-paint. It is these kind of details that really help the modeler. The layout drawings are well done, but no locations are given for the stenciling. Of course, it is uncertain how much stenciling was re-applied after the re-paint.

In conclusion, this is a very well done decal set, providing decals for a very historic squadron. I only hope Yellow Wings continues to provide decals for these early fighters as no one else seems to be doing so!