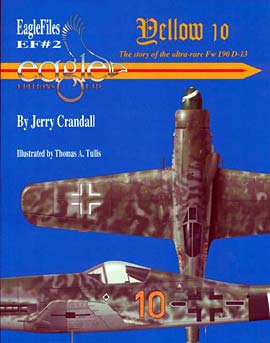 This is the second release from Eagle Editions and the familiar team of Jerry Crandall and Tom Tullis. This soft covered book follows the same format as the previously reviewed Doras of the Galland Circus. The book is 87 pages long and is printed on glossy, thick quality paper.

Jerry Crandall starts the book by explaining the history of Fw 190D-13 "Yellow 10" and his association with it. There are plenty of clear photos included with the text. This explains the history of the aircraft leading up to its eventual restoration and display at the Champlin Fighter Museum. The author includes some color shots of the aircraft in its derelict state, even though many of the photos are black and white. All the photos are printed clearly and as large as possible.

There are some additional items included in the book such as the brief history of "Black 2", a Bf 109G-10/U4. Jerry explains his brief association with the aircraft. Color photos are included of its derelict condition when discovered in the United States.

The book includes superb color profiles of Tom Tullis. Eagle Editions have also included data and color profiles for five aircraft. Overall views are shown for "Yellow 10" and side profiles for "Black 2". Not mentioned on the cover, is the addition of color artwork for three additional Fw 190Ds. They are: Fw 190D-12 Prototype "V63", Fw 190 D-11 "chevron 81" or "chevron 61" and finally Fw 190D-9 "Black 10".

Jerry Crandall goes to great length to explain the subtle differences that make up the Fw 190D-13. The book is complete with six pages of plans of "Yellow 10". Inserts depict some variations between the Fw 190D-9 and D-13.

For anybody interested in late war German aircraft, this book is a must. Plans and photos clearly show the nature of the Fw 190D-13; these are a must for any modeler wanting to try to modify their 1/32nd scale models. I would give this book five out of five stars. Your reference library will not be complete without it!