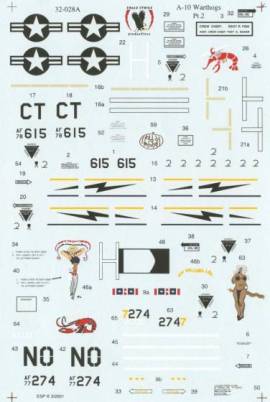 The most eagerly awaited release in years for the 1/32nd scale modeler has to be the Trumpeter A-10. Newly released from Eagle Strike Productions are three decal sheets for that kit.

Sheet #32028 supplies the modeler with the choice of three different aircraft. The first A-10 is from the 118FS/103FW, Connecticut ANG and is painted in the faded two-tone gray scheme. The second two aircraft are from the 706TFS, Louisiana ANG. They are both painted in the Euro 1 scheme and operated during Desert Storm.

As with all Eagle Strike decals issued to date, they are printed in perfect register with a minimum of carrier film. The decals are very thin and printed on a two sheets. They should pose no problem when applying them to your model. Only minimal stenciling has been supplied as those items can be found on Eagle Strike sheet #32022. 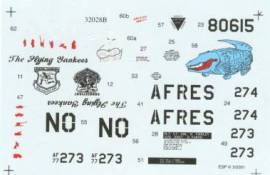 I found the Louisiana ANG aircraft to be particularly appealing. Eagle Strike have included decals for the applicable Bone Yard numbers should the modeler choose that option, as that is where these aircraft were when photographed. Both aircraft are graced with extensive artwork on the nose and drop tanks. The pin up on one of these aircraft has acquired a moustache and armpit hair over time, which they have supplied. It is a simple matter for the modeler to touch up those items with flesh tone paint to restore these aircraft to their previous glory.

Eagle Strike have included on their instructions four views of both schemes to aid the modeler with painting. Close-up photographs are also included showing the pin ups. A template is included for the false canopy pattern to be sprayed onto the faded gray scheme. As with any quality decal sheet, references are included. Completing the instructions are samples of the FS colors required to paint the model.

These markings will make a great addition to your 1/32nd scale Trumpeter A-10.