I spent the better part of last evening going over this detail set part by part comparing it to the Revell kit. The good folks at Flightpath donated this detail set for review a few weeks ago. When the set came I was left enchanted by the quality and quantity of the provided material. A few days ago I finally received the Revell's Hawker Hunter. The kit is probably the best kit I ever laid eyes on in this scale so my immediate thought was why I would need a detail set for such a good kit. So let's take it part by part. The set contains one incredibly large fret of etched details accompanied by a backing instrument film and four white metal parts. We can safely say that this is a photo etched detail set. One thing that sets this one above the other is that the photo etching is double sided. Most PE sets have details only on one side and the other is plain metal. Flightpath is different- some parts have details on both sides.

Here is an example: 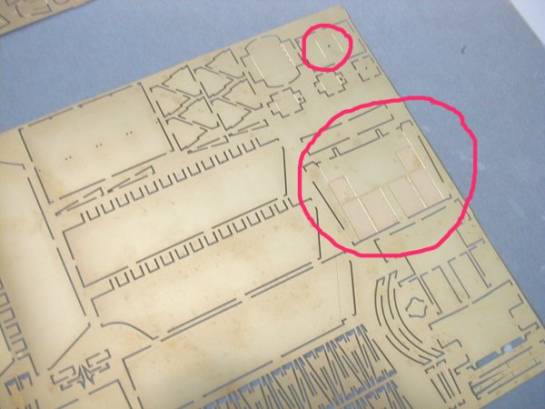 During the first excited inspection one must notice how great the instructions are. They are printed in colour on five pages. The first two pages are filled with text describing the construction and the other three are filled with computer drawn 3-D line drawings. 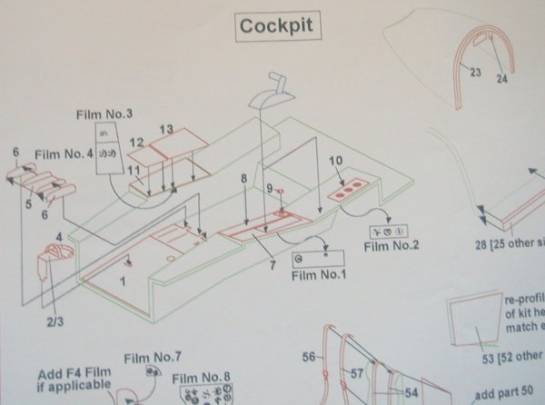 But there is a reason for such comprehensive instructions. Namely the detail set contains about 300 PE parts. These are divided into the following subassemblies:

The cockpit was the part I had the least trust in. Namely Revell's cockpit is quite good, but Flightpath offers new cockpit consoles. After closer inspection I finally cracked the enigma. Flightpath and Revell offer two different side consoles and such Flighpath's consoles are the replacement parts for the Revell's inaccurate cockpit. This was confirmed by a quick visit to Damien Burke's excellent Thunder and Lightings website. The modeller must of course sand off the details on the Revell consoles. The instrument dial films are superb and one can actually read the numbers on the altimeter 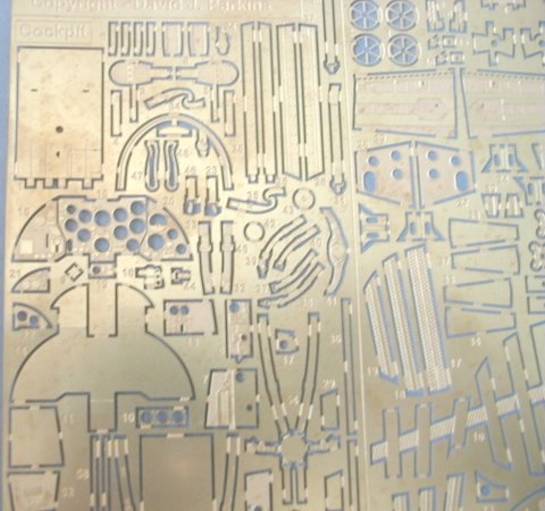 The second thing is the ejection seat. Turning to the instructions they say:

The seat supplied with the kit is a Mk.3, and is actually rather less useful for a British Hunter then the Mk.2 seat which was fitted to the earlier Hunters, and retrofitted to most RAF/Royal Navy machines in their later years. We provide parts to modify the kit seat to a Mk.2 version.

Flightpath also provides the full complement of ejector seat straps. This will be a chore to build, but I think it will look nice. One gimmick that a modeller should know is that when using PE straps he should first heat them up using a blow torch or a candle (but don't melt them). If one does that then the PE parts will become very, very soft enabling you to fold the straps in a very realistic manner over the surface of the ejector seat. Personally I like it best when a set of buckles is also provided so that a modeller is given a choice.

The airframe part of the fret is made up of minute details and some other things. These other things are the correction part for the intake plates and compressor blades. In the airframe part you also get some very nice parts that will build up in to the rudder-lock and FOD guards. 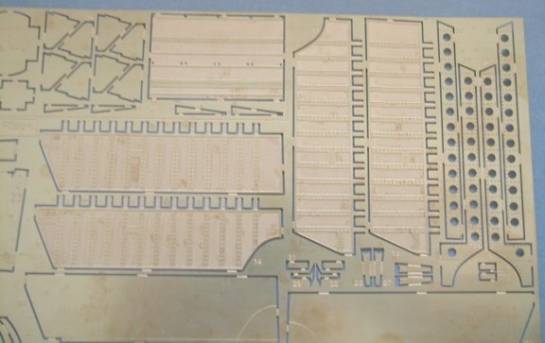 This is the most extensive part of the detail set. According to my count the airbrake and wing flap are made up of 114 PE parts. I am not saying that this will be a quick build, but boy will it look great when finished. Also both the cut-out and the normal flap are provided, so one can build the F.6 version with no problems.

The last subassembly provides parts for almost a new main wheel bay. They look great, but we shall see how the thing fits. There are also parts for detailing the wheel hubs. These are the also the parts on which I found the only flaw in the set. One hub had two spooks etched away. 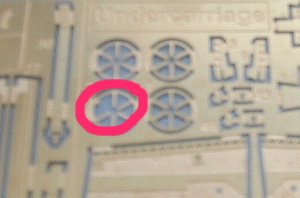 As said I felt a bit uneasy when I started to compare the set and the kit, but through the process I found that the set covers the areas where the kit lacks or is inaccurate. In fact I only found two parts that are redundant since the parts in the kit are better. So the a great set supplementing where a great kit lacks. Can it get any better then this?

While this set is an investment I assure you, that you will be pleased to have purchased it.

You will also be given a full account of how this kit and set build up. So stay tuned.