The 1/32nd scale Revell P-47 has been available now for a number of years, being released as bubbletop and razorback versions. Like many of Revell's earlier efforts, the model suffers from oversize rivet detail and raised panel lines. The details that are included in the kit are very soft and inaccurate. However, with a little effort, the model can be built up into a nice representation of this important WW II fighter. By now, many of you are aware of the extensive product line offered by Jerry Rutman. To date, Jerry has released a number or resin products to assist the modeler in building these old Revell kits. Like myself, I am sure that many of you have these kits sitting around your basement awaiting the release of aftermarket items. Jerry has now come to the rescue of the Revell P-47, and offers a number of aftermarket sets for this model. While not a complete listing of Jerry's P-47 products, this is a review of many of the items now available. 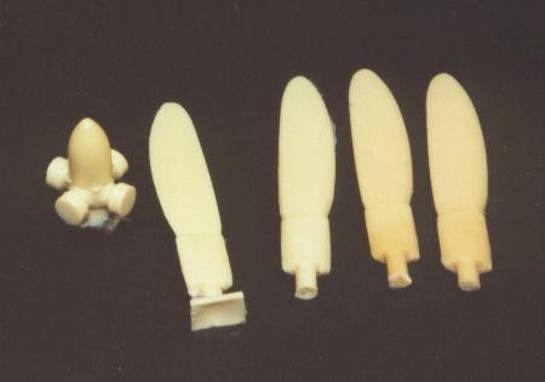 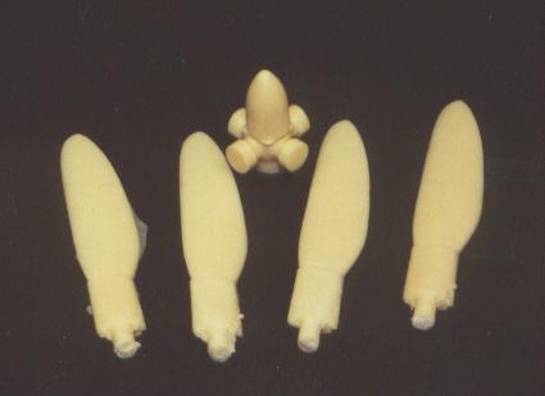 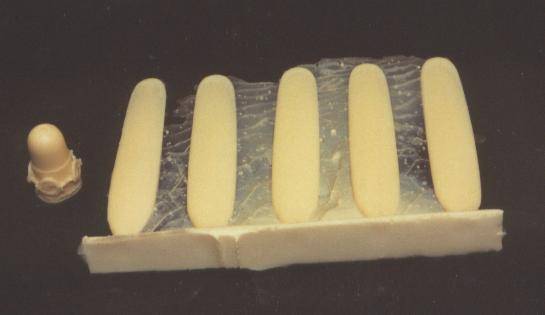 In its service life, the Republic P-47 used four different styles of propellers. Out of the box, Revell supplies the modeler with a rather poorly shaped Curtiss Electric design as found on early P-47s. The same propeller is supplied in both the razorback and bubbletop versions. Jerry supplies three additional prop assemblies. They are the Hamilton Standard propeller, Curtiss symmetrical and asymmetrical paddle blade propellers. Careful research will be required to determine which design that you require.Each assembly is superbly cast. There are no pinholes on the blades and they are very sturdy. The hub detail is also very nicely represented on each separate set. 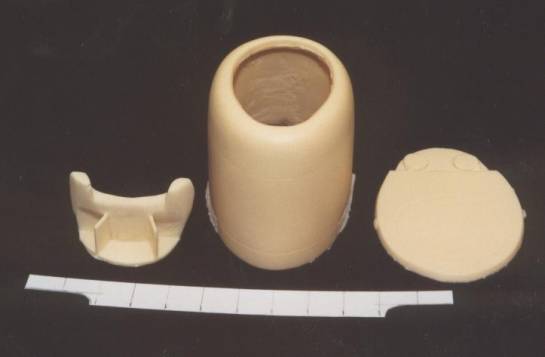 The cowling has one of the inherent shape problems that plagues the Revell kit. To correct this, Jerry supplies a new resin cowling. Some surgery of the kit is required to complete this modification as the Revell cowling has to be cut away from the fuselage. Upon doing so, this resin cowling is intended to be a direct replacement.The new cowling comes complete with new intakes and firewall. The cowling has very fine details scribed onto its surface. The cowl flaps are supplied as a .010 plastic template. This can be glued to the trailing edge of the cowling to depict the flaps closed. If you wish to show the cowl flaps open, it is a simple matter to cut the template on the scribed lines and attach in the open position.

The cockpit is another area that requires aftermarket help. Revell supplies the same cockpit for both razorback and bubbletop kits. Consequently, the razorback kit incorporates the armored headrest found in the bubbletop. There are substantial differences between cockpits depending upon the variant. Revell supplies a poor rendition of the seat, which is molded on to the floor. Sidewall detail is fictional at best. The instrument panel has raised detail and bears no resemblance to the actual aircraft. 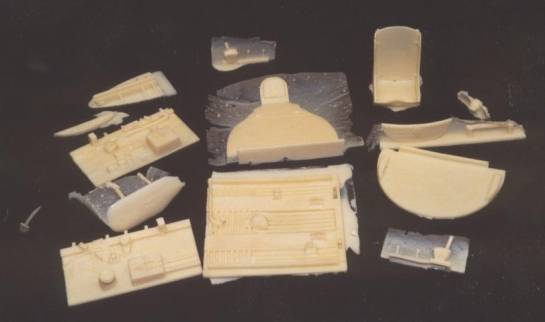 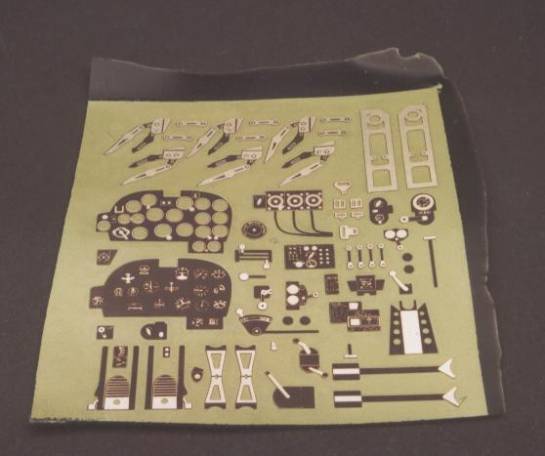 Jerry supplies a choice of new resin and photoetch cockpits. A razorback and the two different bubbletop cockpits are all available. These items are designed to be direct replacements for the items that Revell included. The set reviewed here is for the early bubbletop P-47 with the corrugated floor. The resin details are nicely cast with some flash that is very easily cleaned up. The sidewalls, armored headrest and floor are crisp with plenty of detail molded on. The seat is cast as a single unit without seatbelts. Seat support details are molded on to the back of the seat. Jerry also includes a new glare shield as one is not supplied in the model. The area aft of the headrest also receives a detailed replacement item with canopy rails. Small knobs, joystick, gunsight and throttle assembly completes the resin set.Photo etch items are also supplied to allow you to add plenty of additional items. The set is done by FotoCut and a number of cockpit and airframe items are supplied. The cockpit items include a new instrument panel, rudder pedal assemblies and sidewall pieces. 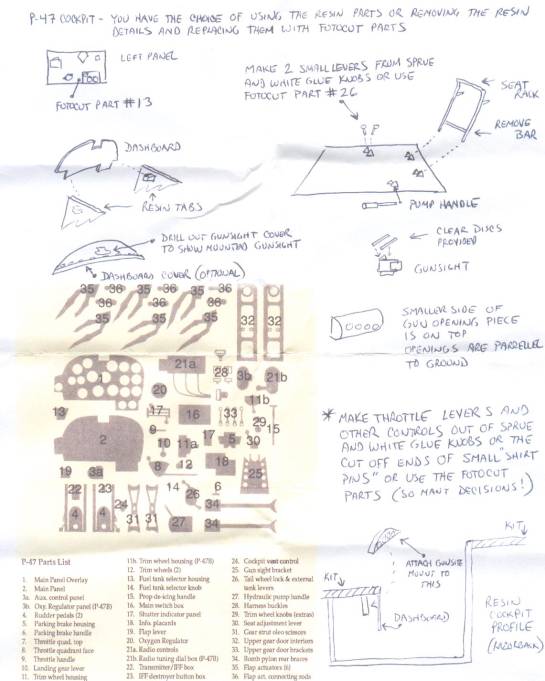 Three pages of typed and pencil sketch instructions assist the modeler with the placement of all parts. Take the time to study the instructions carefully. As an added bonus, the FotoCut sheet supplies additional landing gear details and flap tracks for those who wish to display their P-47 with the flaps down. 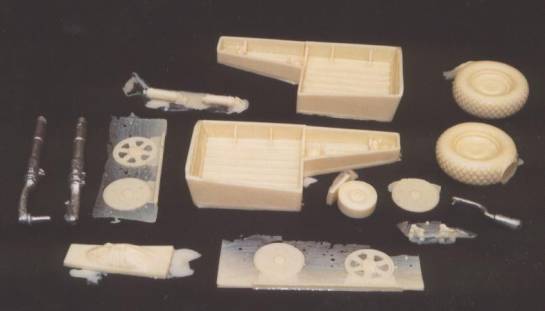 Like the cockpit, the wheel wells on the Revell P-47 suffer from fictional detail. Jerry supplies replacement items, including the tail wheel well. The aftermarket wheel wells are designed to replace the molded on detail found on the model. It should be a simple matter to remove the kit wheel wells. These new, correctly shaped resin wheel wells, have plenty of detail molded on and will be very helpful in fixing this problem area. No actuators are supplied for the inner gear doors, so the modeler will still have to supply these items.

The landing gear that Revell has supplied is in need of a major overhaul. The main gear legs suffer from inaccurate length, as they are molded with the oleos extended. The tail wheel strut should be on the left side, not the right as found in the kit. The wheels are void of any tread pattern and the wheel covers are not flat discs as found on the actual aircraft.Jerry supplies replacement gear legs of the correct length, cast in white metal. As the model is rather heavy, this will definitely add some needed support. Additional items, such as hydraulic actuators and scissors are included as resin items. The hydraulic cylinders for gear retraction and extension will require plastic or metal tubing to complete.The modeler is also given a choice of wheels. Jerry supplies six or eight-spoked wheels. If you need to use wheel covers, that option is also available. It is a simple matter to drop in the correct wheel pattern that you choose. The tires have a diamond tread pattern and are bulged. A replacement tail wheel completes the set. My wheel well set came without instructions, so additional reference material may be essential to further complete this set.

P-47s had their gun openings at the leading edge of the wing parallel to the ground. Revell has these items parallel to the leading edge of the wing, and therefore, they are incorrectly canted upwards due to the dihedral of the wing. Jerry makes available corrected resin gun openings. No machine gun barrels are supplied. This probably won't pose a problem, as most people would prefer to replace these items with brass tubing.

The Revell canopy is very poorly molded with a large, prominent tab, visible on the inner surface of the canopy. This was done so as to allow the canopy to slide open and closed on the kit. Jerry offers a clear, vacuform replacement for the kit canopy. It includes the windshield and canopy as well as a resin canopy support.

Many late model P-47s were factory and field modified with a dorsal fillet. This was added to improve directional stability. For those models requiring this modification, Jerry supplies a resin part that is easily glued on. 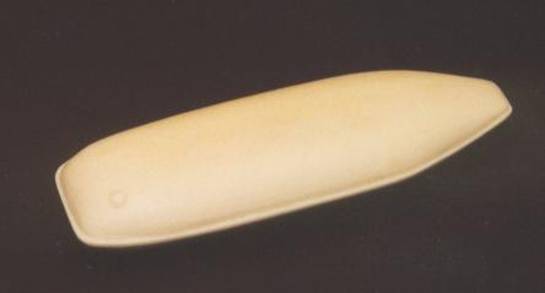 Revell includes a 75 gal. fuselage mounted drop tank. Jerry Rutman gives the modeler the option of using the 150 gal. pancake drop tank, which many P-47's carried. The tank is cast in resin as one piece. My tank had lots of pinholes that should be easily cleaned up with putty. I highly recommend Jerry Rutman's aftermarket sets to anyone wishing to build an accurate P-47 in 1/32nd scale. I think that previous model building experience is required due to the large amount of cutting and fitting that needs to be performed. Reference material would also be essential, as careful research is needed to determine what sets are appropriate for use. Detail & Scale or AeroDetail on the P-47 would prove to be invaluable. This project will take lots of work, but I think that your perseverance will be handsomely rewarded.