The Revell 1/32nd scale P-38J kit was first issued in 1970. It has subsequently been released in different versions. The only differences between these various releases are the decal options. Some kits incorporated a separate tree consisting of 165 gallon drop tanks and Christmas tree rocket launchers with ten five-inch rockets. Externally, the large Revell offering captured the look of "The Fork-Tailed Devil". However, detail in the cockpit and wheel wells was sparse, as it was with most of Revell's early efforts. The landing gear was very weak, especially after adding weight to the nose of the aircraft while trying to achieve the proper stance on the ground. The tires had no tread pattern molded on to them. Due to many of the problems that are incorporated into this kit, most modelers have left this kit unbuilt, collecting dust in the attic.

Now, with the release of a 1/32nd scale P-38J detail set from Jerry Rutman, you can pull that unbuilt Revell kit out of the attic! This resin set is designed to fix all the inherent shortcomings found in the 1/32nd scale model. This resin set includes new wheel wells, landing gear and cockpit interior.

The wheel well parts are designed to replace the kits components. The resin pieces are complete with all interior detail accurately represented when compared to the photographs in Detail and Scale. Jerry has included elaborate ducting, hydraulic lines and stringers found within each wheel well. To accept the much deeper main gear wheel wells some cutting is required. The spacers above the wheel wells on the kit's tail booms and wings need to be removed. To aid the modeler in construction, markings clearly indicate the parts required for each subassembly. 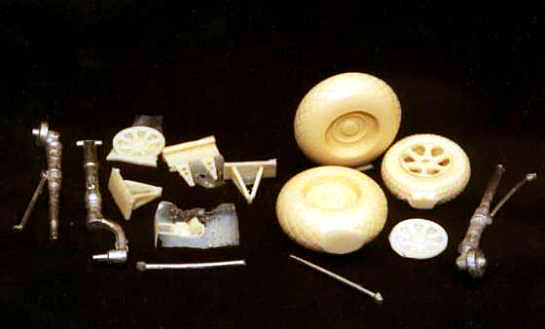 White metal landing gear and supports are included. Resin scissors and a brake cylinder complete the gear legs. The main and nose gear wheels have been cast with the prominent tread pattern. The spoked hubs on the main gear are cast separately, which will greatly simplify painting. 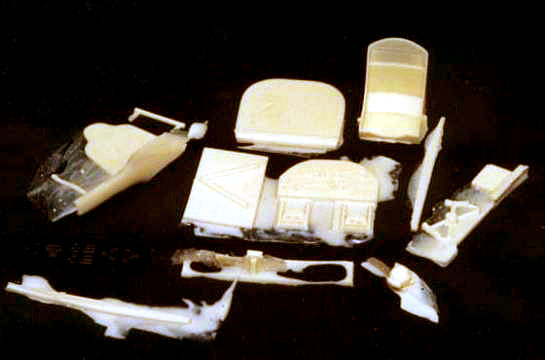 The cockpit is made up of approximately 26 resin pieces. All items include very finely cast surface detail and compare favorably to photographs found in Detail and Scale. Some engine controls will have to be added by the modeler. The cockpit floor has to be sanded to have it sit properly above the nose gear wheel well. Fotocut has supplied the buckles for the harness therefore no seat belts are cast on the seat. The flash seen in these scans is a byproduct of the casting process that Jerry uses. It is easily removed, cleaned up and should be of little consequence to anyone with experience. 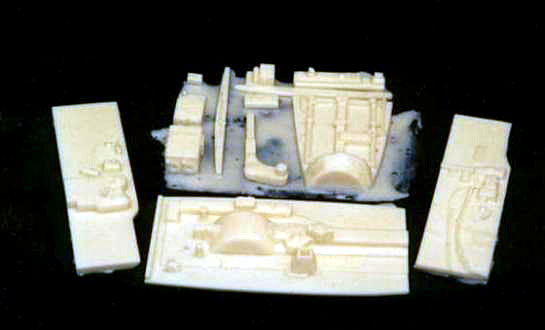 Jerry supplies easy to follow pencil sketch instructions. Other references will be needed as no painting details are included.

This resin set does not appear difficult for any experienced modeler. Jerry's product will be of great help to anyone wanting to build the Revell P-38. Without hesitation, I highly recommend this product and give it five out of five stars.

Jerry also has available a 1/32nd scale P-38E/F conversion set for those wanting to make the Revell kit into something a little bit different. Wheels, cockpit, wheel wells and metal landing gear are also available separately.