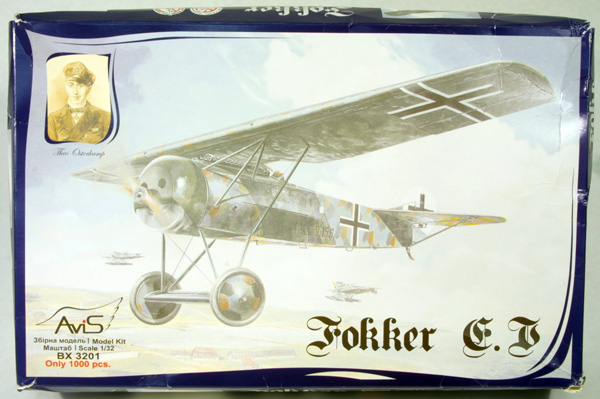 "You got a package," my wife called. "I hope it wasn't important, because it is squashed flat!" This was how I first learned of receiving the first 1/32nd kit produced by a new, at least to me, firm from the Ukraine called Avis. I had purchased the kit directly from the Ukraine, through eBay. When I got home and took a look at the package, I realized my wife was not exaggerating as the package was nearly flat. They had simply wrapped the kit box with brown paper and sent it through the mail. Since the box is that really weak cardboard that many of the Eastern European companies use, it simply could not hold up to the rigors of the mail system. I held my breath as I opened up the box, but a quick check revealed no damage.

As a super quick introduction, the Fokker E.V was the latest in a long line of Fokker designs. This aircraft was an attempt by Fokker to produce a fighter using a single parasol wing, as he (rightly) believed better performance could be had with a less drag inducing single wing. The parasol wing was created out of plywood glued to wood truss formers. The first aircraft, designated E.V, performed well but had some problems with manufacturing resulting in crashes from wing failure. Revisions were made to increase the strength of the plywood to strut connections and the plane was re-marked the D.VIII. The aircraft out-performed most all the Allied fighters of the time, but it was a case of too little too late. It went on to serve (in small numbers) in several European air forces after the war.

So what is in the flimsy box? You will find 6 smallish sprues of light grey plastic plus wing halves and fuselage halves joined by short sprues. Also in the box is a small piece of acetate with some printed instruments and the outlined windscreen as well as three smallish decal sheets with markings for one aircraft and 4-color lozenge in both upper and lower colors. Rounding out the package are the instructions which consist of two pages double sided of black and white diagrams. 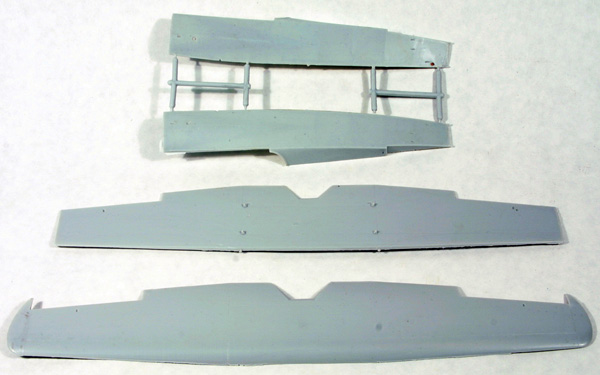 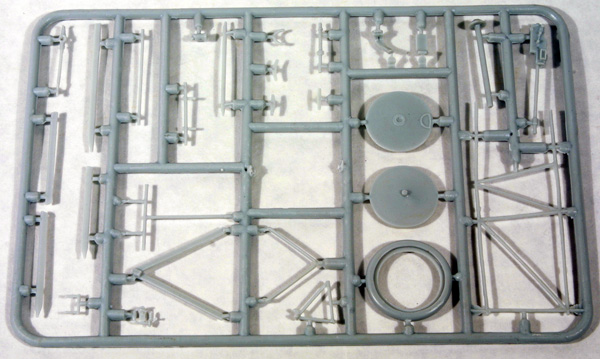 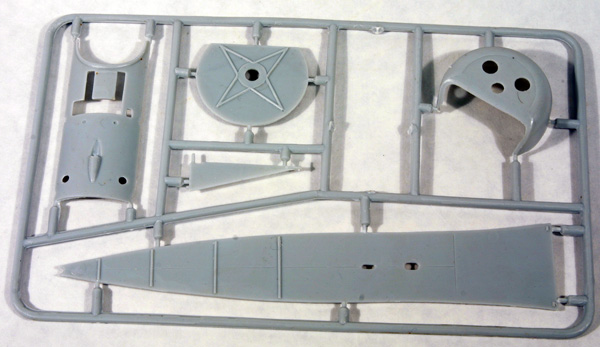 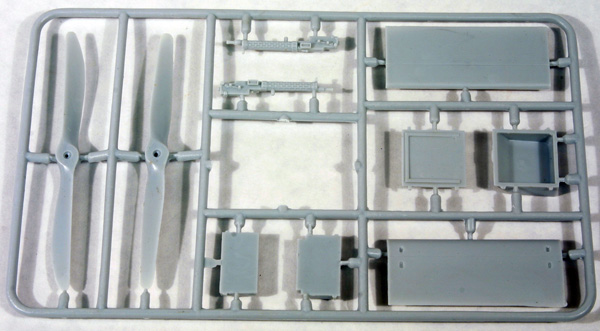 Taking a closer look at the sprues, it becomes quickly apparent this is a short run kit (And it really is short run! They advertise they will only produce 1000 kits). There is flash on some of the parts, and a few sink marks. There are no part numbers on the sprues, instead you must refer to the diagrams on the instruction sheet for the correct numbers. Also typical of short-run kits, there is virtually no locating pins, and those that exist don't match up well with the provided holes. Also, some of the recessed panel lines, although petite, are inconsistent and will need to be re-scribed. What isn't typical of a short-run kit is the fine detail (check out the stitching on the underside of the fuselage!), tiny detail parts and small sprue connections. A quick comparison of this kit versus the Battle Axe Fokker E.V shows the Battle Axe kit as having much heavier details on thick sprue attachments. 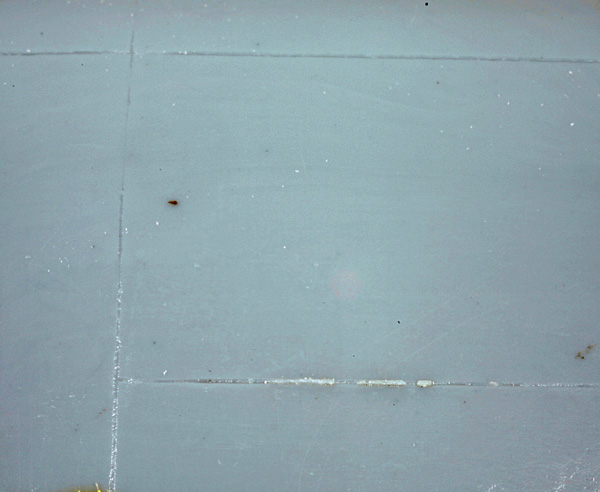 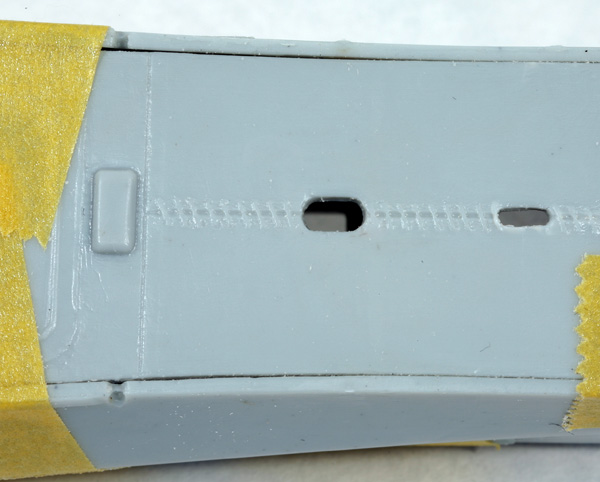 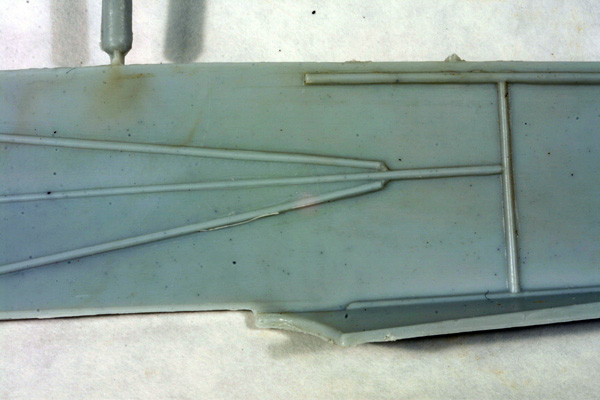 Checking on the details, this reveals my near total lack of WWI reference material!!! I was able to locate a small three-view on the E.V on the internet. Don't know how accurate they are but I scaled the drawing up to 1/32nd scale, meeting published span and length. Doing this showed that the wings and fuselage shape matched the drawings very well. ( FYI, the Battle Axe kit is smaller in span and fuselage length.) As far as details, I can not add much. There is another review out there that goes into more depth on the details. What I do know is the cockpit is made up of 18 parts, an engine made up of 17 parts, all flying surfaces separate and two Hotchkiss guns of three parts each. Incidentally, on the sprues marked as "not for use," are two more machine guns without cooling jackets in case you have some etched metal you would like to use.

To give you an idea of constructability, I put together the major components. Again, here you can quickly tell this is a short-run kit. Every part needs clean-up of mating surfaces and some filing work to get everything to fit. However, once cleaned up most everything looks good! The front gun deck will need a little work as it appears to be a little wide for the fuselage. Also, I did not put together the cockpit but I am a little worried about trying to take those fine parts off of the sprues, especially the interior framing. Not to mention trying to clean up the seams! Some of the interior parts are really tiny, and some parts may be better represented with PE but on the whole I think it will make for a pretty well detailed interior. The only other comment I have is the struts look pretty darn flimsy supporting that large wing, but we will see.

Another item of interest is the engine. It has pretty good detail, although I think the fins on the cylinders are a little too fine. I may replace mine with the resin engine from the Battle Axe kit, which is nice, or the incredible Vector resin engine. 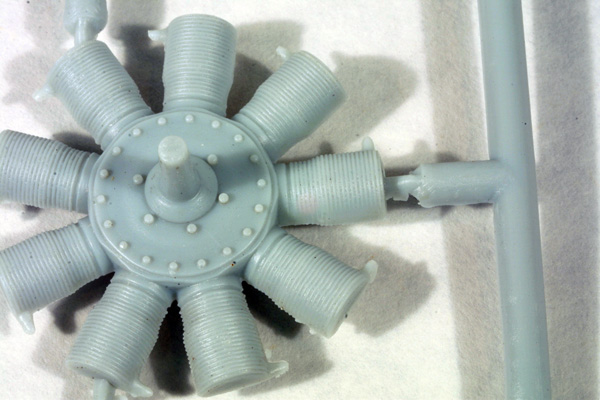 Finally, a look at the decals. The kit provides decals for one aircraft, a Fokker E.V of Theo Osterkamp in dark green and 4-color lozenge pattern. To me, the lozenge pattern looks off. Of course, to me all WWI lozenge decals look off - way too bright - but that may be that I am used to the more muted camo of WWII aircraft!! At any rate, there is a discussion of the 4-color lozenge including examples of what it probably should look like based on existing fabric examples at this site. Supposedly Americal is the only decal supplier with a decal set with 'more correct' colors, and they have gone out of business. When I decide to build this kit (and I can hear everyone saying, "Build it now Ray, you are almost halfway there already!" but I have to finish some of my other half-built kits already!), I may just make my own decals, including reversed interior ones, from this research. 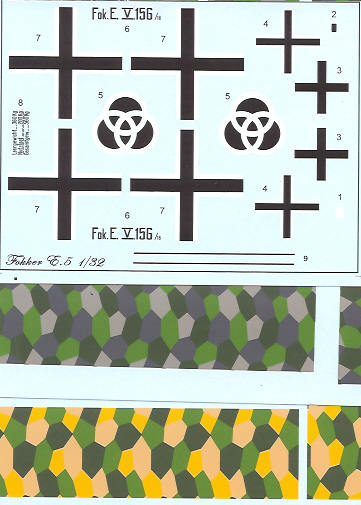 In Summary, I must say I like this kit. No, it's not a Tamiya shake-and-bake, but it will make a nice kit of a late WWI fighter not likely to be seen from the mainstream manufacturers in the forseeable future. Note: Retail price in the USA is $80! But someone (username blerio11), probably the manufacturer, is offering them for about $44 + $16 shipping from the Ukraine on eBay. If they really do stop at 1000, get one now as the price will go up in the future!!!