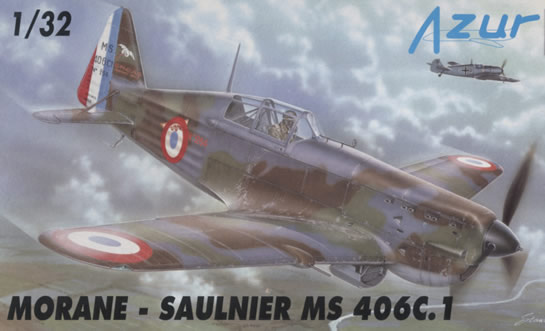 The Morane-Saulnier fighters were in response to a French Air Force specification for a single seat fighter capable of reaching 450 Kph, with a monoplane layout and retracting gear. Morane-Saulnier’s response was the M.S. 405, a low-wing monoplane of mixed construction, with fabric covered wood tail and a bonded metal/wood material (Plymax) fixed to duraluminum tubing. The plane was Morane-Saulnier’s first low-wing monoplane, first enclosed cockpit, and their first with retracting landing gear. The first prototype’s engine was the new 860 hp Hispano-Suiza HS 12Y-grs engine driving a two-pitch propeller. First flight was on August 8, 1935. Development was very slow, the second prototype, with a 900 hp HS 12Y-crs engine did not fly until January 20, 1937, almost a year and a half later. With the new engine the plane reached 443 Kph, which was fast enough to secure an order for a further 16 pre-production prototypes, each including improvements on the last version.

The result of all the changes culminated in the M.S. 406. The two major changes were the inclusion of a new wing structure that saved weight, and a retractable radiator under the fuselage. The aircraft was now powered by the production 860hp HS 12Y-31 engine which took the new aircraft to 489 Kph. Armament consisted of a 20mm Hispano-Suiza HS-9 or 404 cannon with 60 rounds which fired between the piston banks in the engine, and two 7.5mm MAC 1934 machine guns in the wings with 300 rounds each.

By this time a war with Germany was clearly looming, and the French Air Force placed an order for 1000 airframes in March 1938. By April 1939, the production lines at the Morane-Saulnier and SNCAO were producing six aircraft a day. When the war began on September 3rd, 1939, production was at eleven a day with 535 in service. Production of the M.S. 406 ended in March 1940 after the order for 1000 had been fulfilled, plus a further 77 for foreign users including 30 for Finland and 45 for Turkey. Additional orders for Lithuania and Poland were cancelled with the outbreak of the war.

The M.S. 406 was generally free of problems and was equal in performance to its contemporaries. Unfortunately, its contemporary was the Bf109B-D series, and the French designers did not keep up. It was lacking armor plate or self-sealing fuel tanks, and its pneumatic systems meant that one bullet in the right place would render the entire aircraft inoperable. When the Bf109E arrived as the war opened in earnest, the M.S. 406 often found itself little more than a maneuverable target. 400 were lost in combat for only 175 kills in return. Many more were lost on the ground.

After the fall of France, Germany took possession of a large number of 406’s and it’s upgraded version, the 410. The Luftwaffe used a number for training, and sold off a number of others. They saw action in Syria against the RAF, and Finland purchased a number and upgraded them with captured Soviet engines and German cannon. Italy and Croatia also received M.S. 406’s from Germany. Switzerland also operated the type, including producing license built aircraft.

First, let me say that my knowledge of French fighters is virtually nil. There just isn’t that much out there for reference material, especially in English. The information above came from searching the net and from the instruction sheet. I could not find any drawings of the M.S. 406, and wouldn’t know if they were accurate if I did. So this review is based more on quality of parts and my views of what I like to see in a kit than of accuracy. 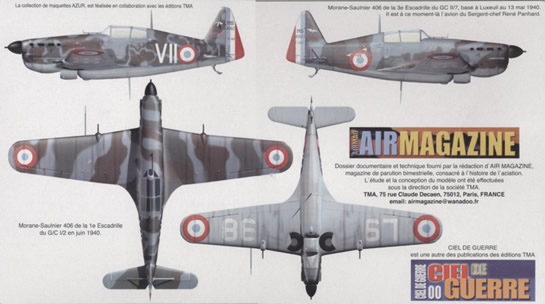 This is the third 1/32nd kit for Azur, the second French fighter after their nice D520. It consists of 4 sprues in grey plastic, 1 sprue of clear parts, plus some very finely detailed and nicely cast resin parts, a small PE fret, and a film of instrument dials which are to be cut up for 7 different instrument clusters. Decals are included for two different French aircraft, both from the 1940 period. The builder is expected to supply a small square of clear acetate for the reflector site glass, and 4 pieces of wire for the landing gear retraction arm. 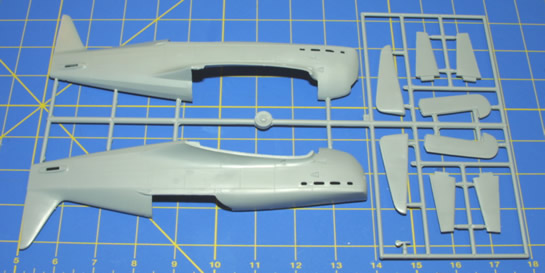 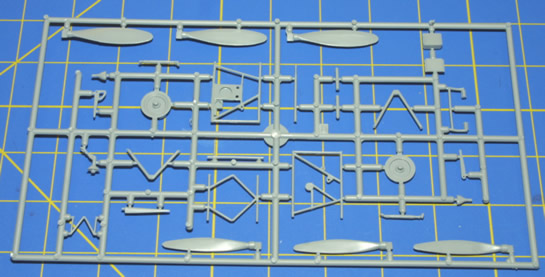 The injection molded parts include finely engraved panel lines and very fine rivet detail. The rivet detail is very restrained and occurs only on a few panels. As much of the aircraft is fabric, I don’t know if much rivet detail should be added or not. The fabric areas include the typical concave valley-and-peaks which seem to be the norm for model manufacturers even though it is probably not totally accurate. The wings have what looks like fabric reinforcing strips that are a little on the heavy side. More research will need to be done on this detail as the wings could be the Plymax material which may be the reason for the strips. Probably a symptom of short-run kit molds, the fuselage surface has a slight texture to it. It is very fine, simply giving the plastic a matte look to it. This will be fine for the fabric areas, but I may be tempted to use very fine sandpaper on the metal panels. Painting may also smooth things out. Another typical sign of short run kits, the sprue gates are relatively heavy, and there is a small amount of flash. 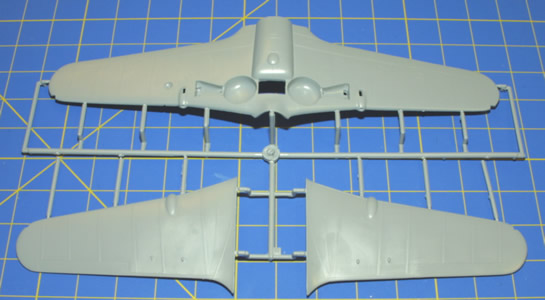 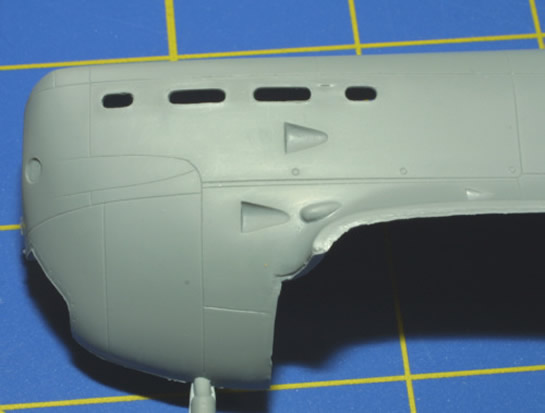 Construction begins with the cockpit, and this is where this kit shines. The cockpit is made up of 65 parts, including 16 plastic, 36 PE, the 7 film pieces and 6 resin parts, plus a piece of clear film you are expected to provide yourself for the reflector site glass. I have included scans of the 12 construction steps for the cockpit from the instruction sheets so you can see for yourself! The cockpit includes the tubular framing for the cockpit sided and rear which should give a very realistic look to the structure.

Before closing up the fuselage, a very finely cast resin radiator front and resin exhausts are installed. The exhaust ports in the plastic fuselage halves will need to be carefully filed out to fit the resin exhausts without breaking them. Then once the cockpit is glued into place, the fuselage is closed up. 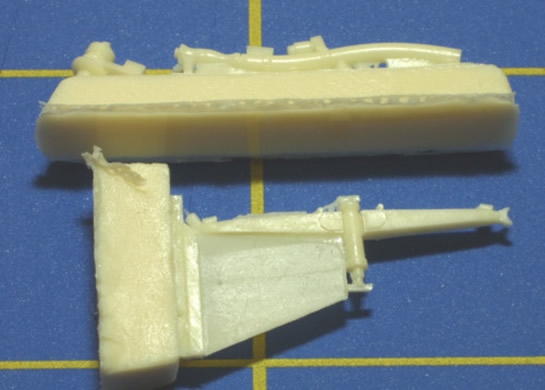 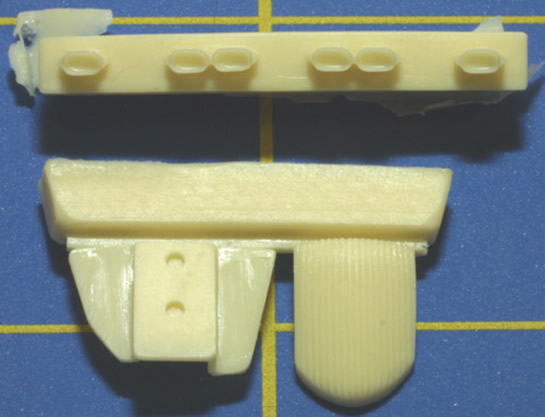 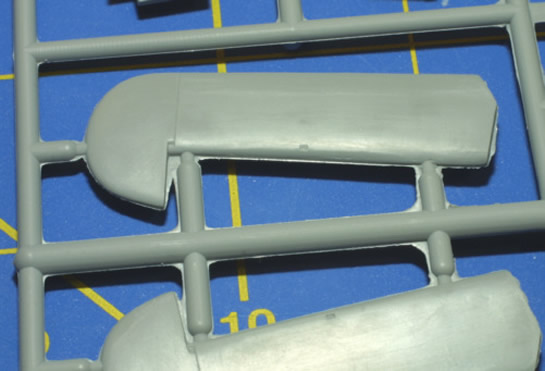 The oil cooler assembly is made up of 10 parts including the interior walls between the wheel wells for a well detailed representation. The modeler is also given two choices of props and spinners, although the instructions and painting guides don’t give any clue of what the different combinations are for. The two aircraft in the painting guide both seem to use the more pointed spinner with the narrow chord blades. The landing gear seems well detailed, with hinge, brace and retraction arms provided. The retraction arms are in resin and are very finely detailed, and the modeler is supposed to add two fine pieces of wire to each arm. Magnification will be required I believe!!! The main landing gear wheels are the one area that I will be looking for an aftermarket alternative. The wheels are well detailed, but the tires come in two halves and are totally smooth and are not weighted.

Final construction consists of adding the canopy and exterior (backup?) gunsight. Happily the canopy is in three pieces unlike the D520 kit, so you can open it and show off that cockpit! The exterior site can be built two different ways, either with a resin rod and the front and rear PE sights, or an all PE one piece affair. The PE option will be a little two-dimensional, but it may be near impossible to remove the resin rod from the pour stub! 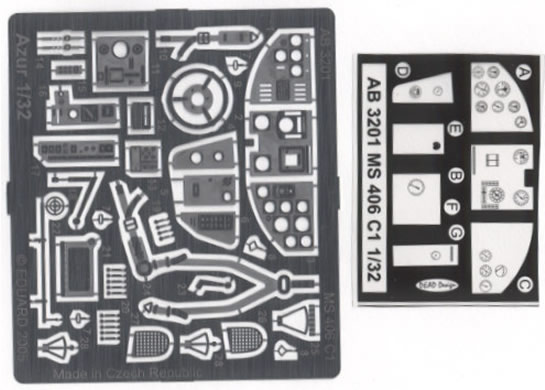 The decals look thin and are in good register. Other than unit, location and date, not much other information is given. As the plane was used by other countries, not to mention the Germans, maybe we will see some aftermarket decals before too long. 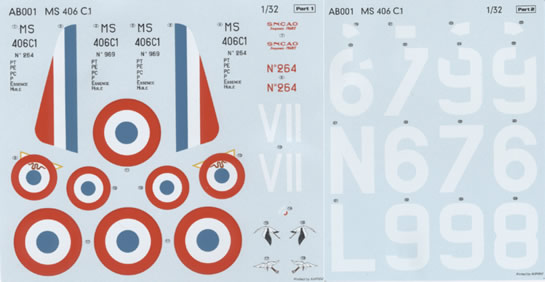 This kit is a definite step above the D520 kit. With the resin and PE parts included, it is like getting the aftermarket parts as part of the original price. The only extra items required for a great model may be a little wiring and some new wheels (Contact Resine???). Definitely highly recommended as a change of pace from all those 109s and 190s!!!

Some walkaround pics of a restored Swiss aircraft: