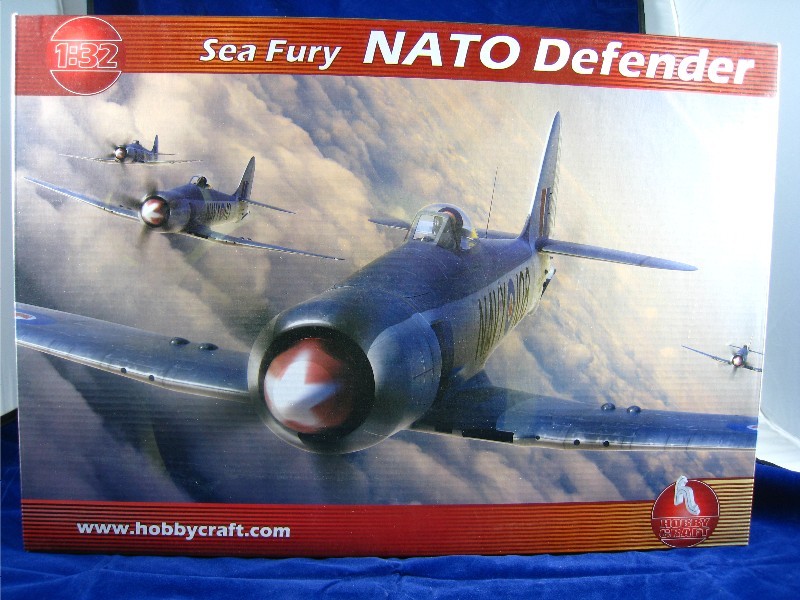 The Hawker Sea Fury was the result of 1940s British wartime design specifications which began with the modification of a Hawker Tempest into a smaller, lighter version. Six prototypes had been ordered by 1943 although the first of the named Fury aircraft did not fly until September 1944 and the first production aircraft first flew in 1946. This was to be the last piston-engined fighter of the FAA. Eight-hundred-sixty aircraft were produced.

Until the acclaimed Fisher Sea Fury was released in 2006 there were no kits available in 1/32. The recent release of the Hobbycraft kit is the first mass-produced offering in the scale. As of this review there are three versions available which represent a large number of possibilities for schemes and markings: 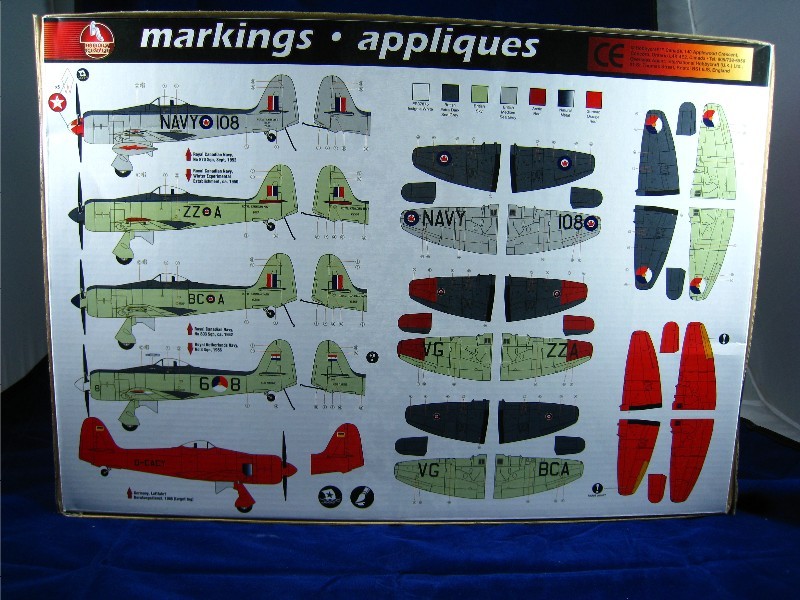 The parts contained in each box are identical, only the decal sheets are different.

The kit: The kit is molded in light gray styrene and comes on four sprues plus the clear 'sprue' (more on that in a minute). The plastic and molding is typical of Hobbycraft and is a little bit soft and a little bit thick but easily workable. Panel lines are engraved and could stand to be more subtle than they are. Under-wing stores include drop tanks, two bombs and six rockets. 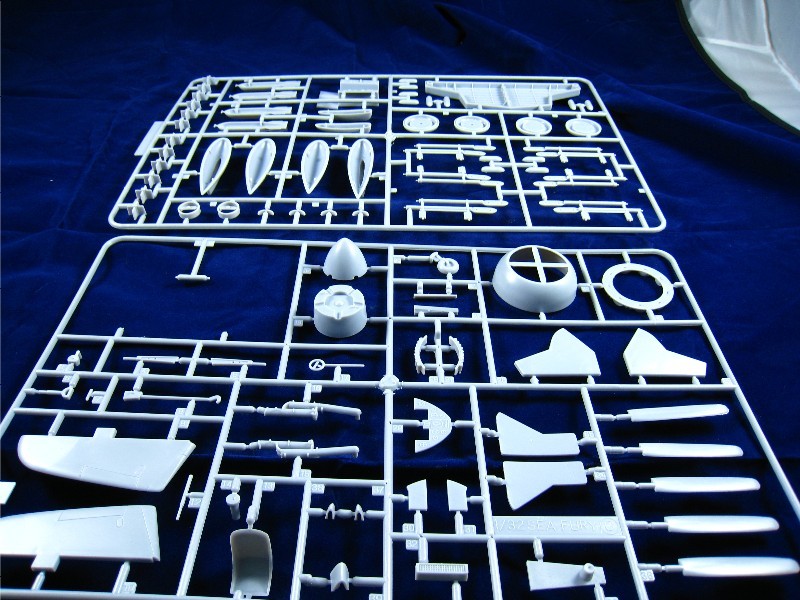 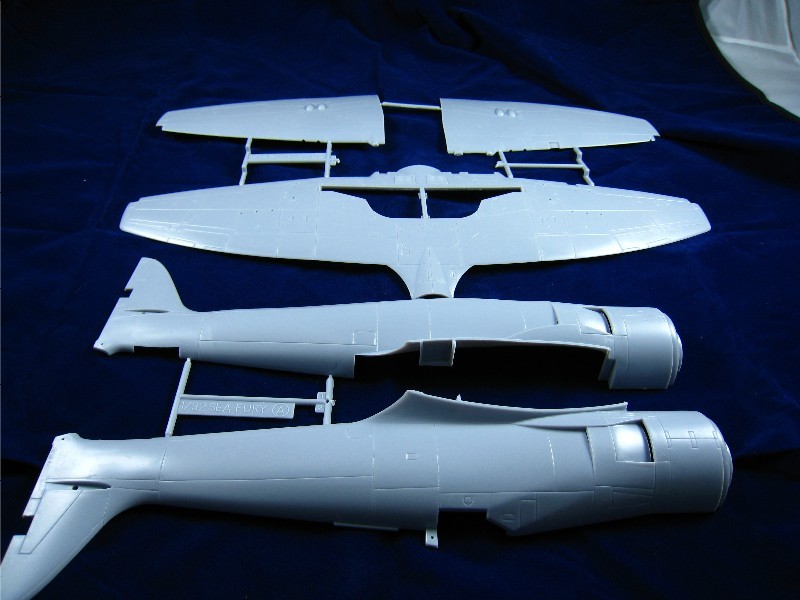 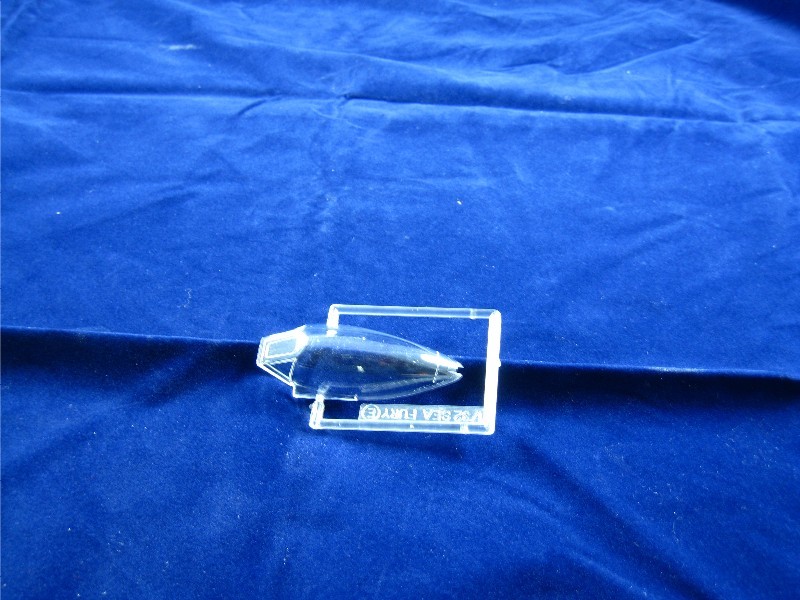 The kit decals seem to be of good quality if maybe a tiny bit thick. The color is of good registry and, as mentioned above, there are plenty of options for choosing a scheme and nationality to depict.

It is at this point that my feelings towards this kit go in two completely opposite directions. On the one hand, the fit and ease of construction of the primary airframe is so good it could easily belong in a much higher price-range. I mean this kit jumps together out of the box. The other hand is very confused about some key issues with this kit:

1: There is almost no cockpit detail whatsoever. What little raised detail is molded onto the IP and side panels doesn't represent anything close to reality. However, the cockpit opening is very small, the interior is painted black and the canopy can only be modeled in the closed position, so it really doesn't matter very much in the end. 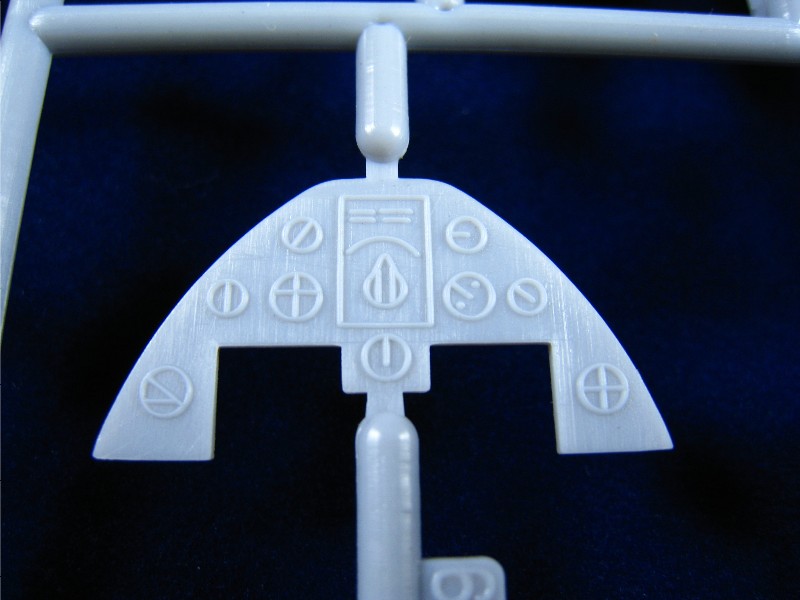 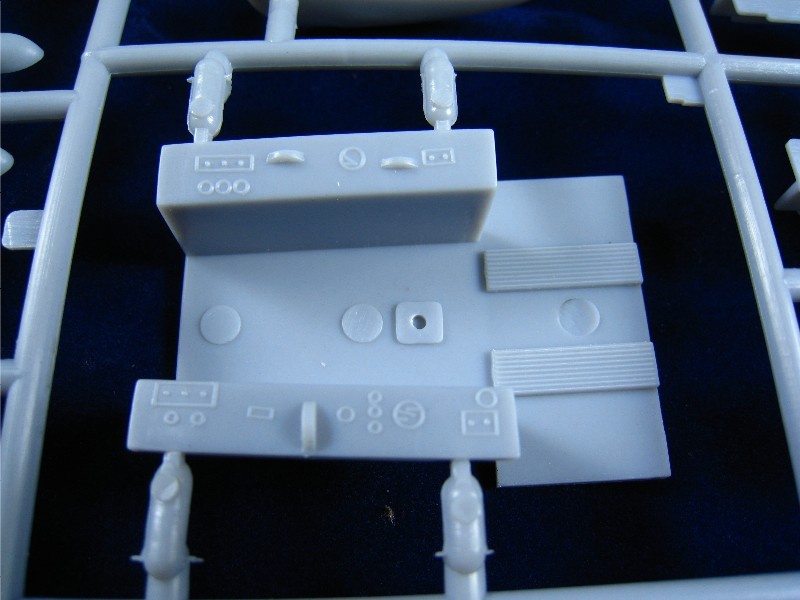 2: The kit has separate parts for the wing tip lights. They aren't clear plastic however! The only clear part in the box is the canopy. It is difficult to imagine what the intent was in making this design decision.

3: The prop and spinner can make you lose sleep at night! The two piece spinner is pretty good in shape. The problem is that the prop blades are not keyed in any way to ensure proper (or even matching) pitch. There is no jig or any other means to install the blades at the correct pitch leaving it to the modeler to do his best with it.

I do not have drawings to compare this kit to for shape issues. To my eye, the amount of slope from the windscreen down to the cowl is a bit exaggerated, and the angle of the windscreen is raked too far back. That is just to my eye however and I could be wrong. Leading and trailing edges are a bit thick and the kit is not filled with detail in any area really. Some may speculate as to whether this is simply a scaled-up 1/48 kit. Without the 1/48 kit to really measure against I can't say one way or the other.

Having read all of this you may assume that this reviewer isn't very happy with this kit. You would be wrong! The vast number of schemes available combined with the overall ease of construction make this an ideal kit for the relaxed OOB builder. It could also make a good starting point for the modeler who seeks a framework to super-detail from a fairly blank slate. It is not a good choice for anyone seeking a highly detailed, ultra-accurate kit OOB.

For what it is, I recommend it.