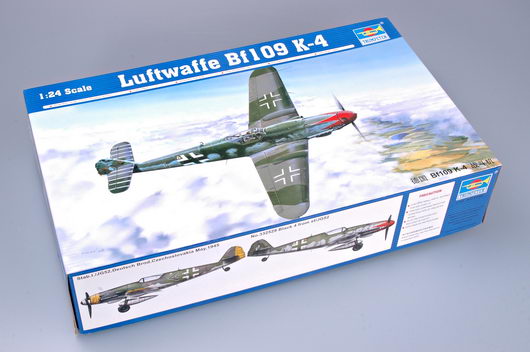 Late in World War II the Luftwaffe was under tremendous pressure to not only defend Germany, but to survive at all. Combat operations and development of new equipment were done literally under cover, giving a desperate hue to all of Germany’s war efforts. It was in these conditions that the venerable Bf 109 saw its final, and arguably finest, development; the K series.

Designed to utilize the new DB605 (ASCM or DCM) and deploy the fearsome Mk108 30mm cannon as its main armament, the K was a fast and deadly interceptor based on the G-10 airframe. The series was highlighted by the -4 model, the only variant of the K that was to be produced and deployed.

Varied practices in the distributed production of the late war 109s gave a wide variety of results to the later G and K 109s, and much photographic proof attests to there being a fractured standard. In that light many 109 Ks share similarities with their G-10 parents, and the reverse is true as well. Almost each photograph of a late war 109 needs to be analyzed in the presence of highly knowledgeable folks to declare what variant it is. Ironically the K was developed to re-bind the 109 series and standardize the airframe around the new 2,000 hp (with MW50 boost) DB605 and the Mk108 30mm cannon. Not quite as fast as the G-10 due to its weight, the K-4 was none the less a potent high altitude high performance fighter that, beyond its basic similarity with the older 109s, barely conveyed a 7 year-old design base.

In what could be the last of the series (this reviewer is still hoping for an F-4) Trumpeter’s Bf109 K-4 is a familiar beast if you’ve opened any previous boxing of the big 109s. In fact with the exception of the decals, every element of this kit is previously released in other kits ranging from the G-2 through the G-6 and G-10. Only within the instructions are a few guidelines given to transform this collection of old series “parts” into a new 109.

Full views of all the sprues as well as a Trumpeter build can be seen at the Trumpeter website so I won’t be clogging up the bandwidth here on that.

The kit consists of 264 parts on 15 sprues plus metal and photo etched parts, black rubber tires and wiring, and an instrument panel film. The decals are crisp and nicely detailed and give two options for Werknummer 332529 “Black 4” of Stab/JG5 and a ship from Stab I/JG52. 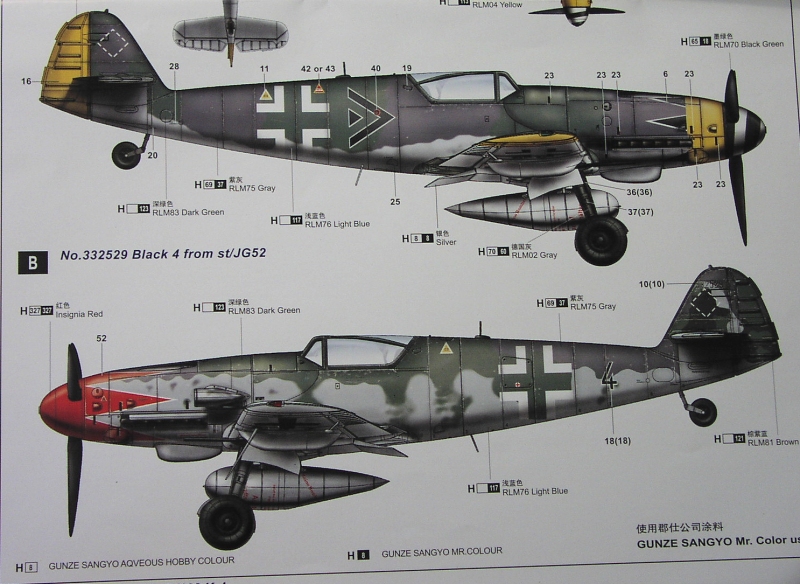 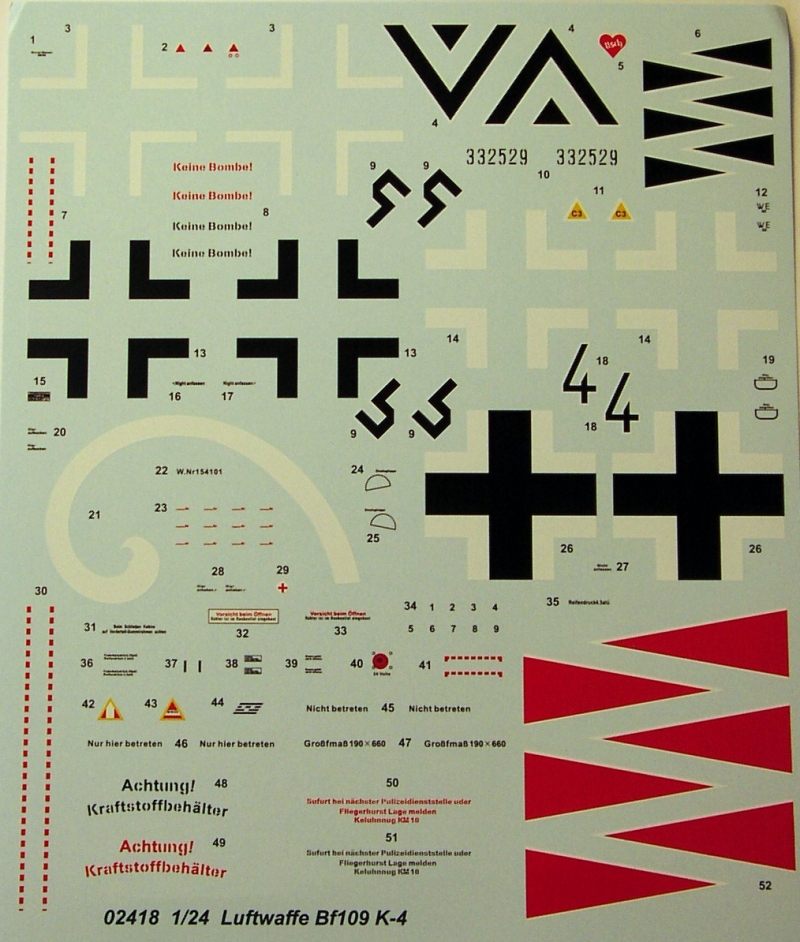 Overall kit detail is excellent, and having built the G-6 in this series I would assume that assembly and fit are very good. The kit comes with two double sprues, one clear and one gray version of the entire fuselage sprue, as well as a double offering of the canopy clear sprue (thoughtful). A strange mismatch is that while the clear fuselage sprue could make an interesting display piece, the engine inspection panel is only offered in solid gray as it has been throughout the series.

The movable flight surface system of pins and rods has never been popular, but is offered again in this release more as a legacy than a feature. Wrestling with this system seems to always yield mixed results, some surfaces flopping freely under their own weight, while others are jammed tight. I highly recommend taking one’s time if wishing to get the best out of that system, or doing some pre-thought on posing them for cementing.

The engine represents a DB605 and while nicely detailed lacks some accuracy. Indeed the engine sprue has remained unaltered from the G-2 release. 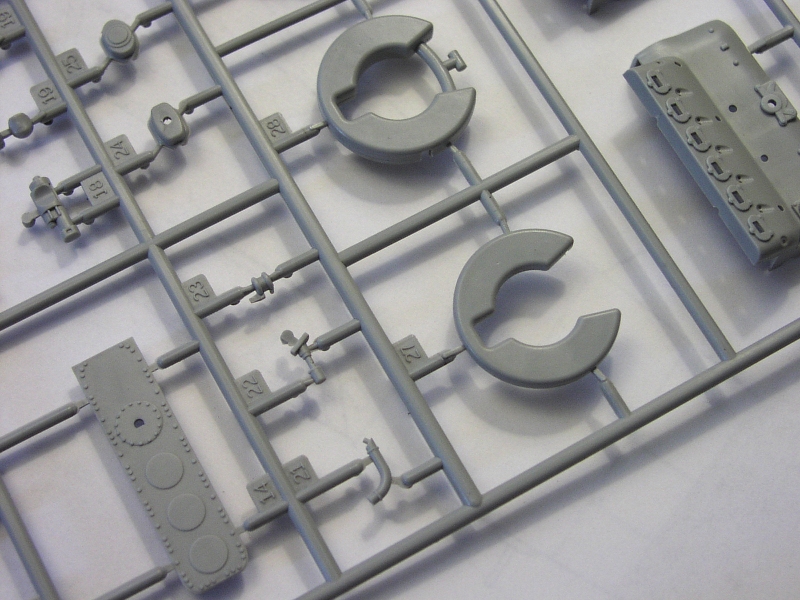 The cockpit parts are a mix from the G-2 and G-6 releases and are missing specific detail to the K-4 altogether. One very disappointing aspect here is the solid-molded Galland Panzer headrest introduced in the G-6 release. This piece in reality was a framed armored glass installation that is one of the most remarkable aspects of late war 109 cockpits. 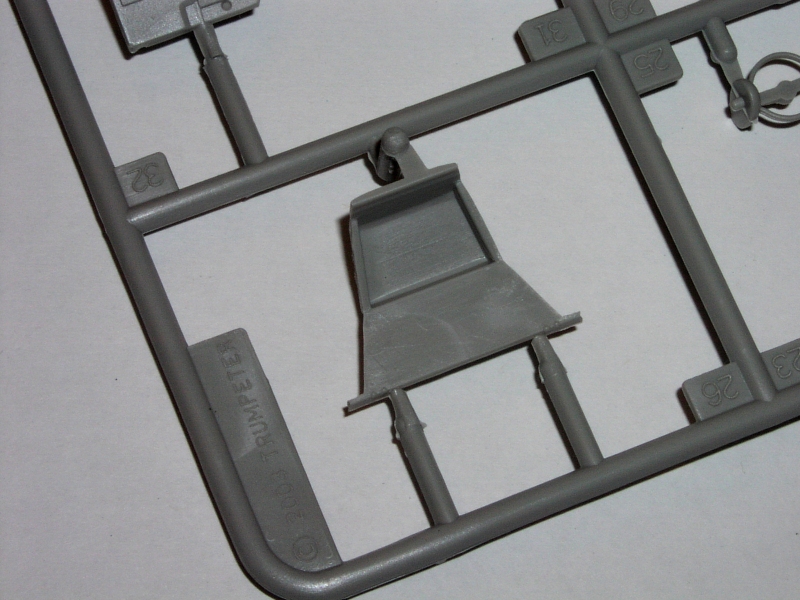 Many other cockpit differences are inherited from the G-2 and G-10 sprues including sidewall detail, instrument panel arrangement, and the gun cover (vastly different for the Mk108 30mm gun than the 20mm MG151). However the cockpit level of detail is quite adequate for 1/24 and assembly is very straight forward.

Within the instructions there are a precious few alterations noted to bring the parts up the K-4 specification, however these are lacking in a few areas. One of the most notable is that there is no reminderthat the 30mm shell ejector chute needs to be opened before mating the wings and fuselage. 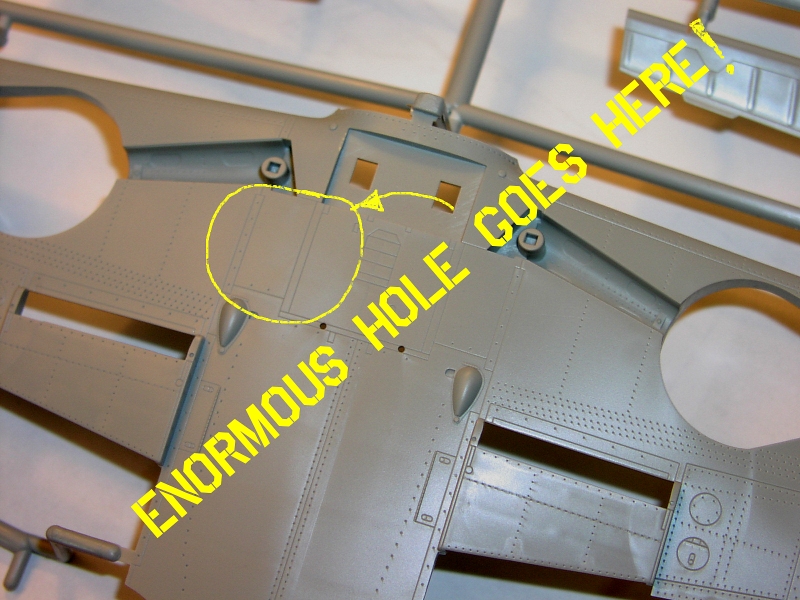 For a very real and accurate research piece on the K-4's belly, see Vincent Kermorgant's in-depth report on Hyperscale:

Nor is the modeler discouraged from either assembling or mounting the “R/6” twin under-wing 20mm gun pods. No K-4 has been recorded as having used the R/6 gun package but yet these pods appear proudly on both color profiles included as painting and decaling guides. 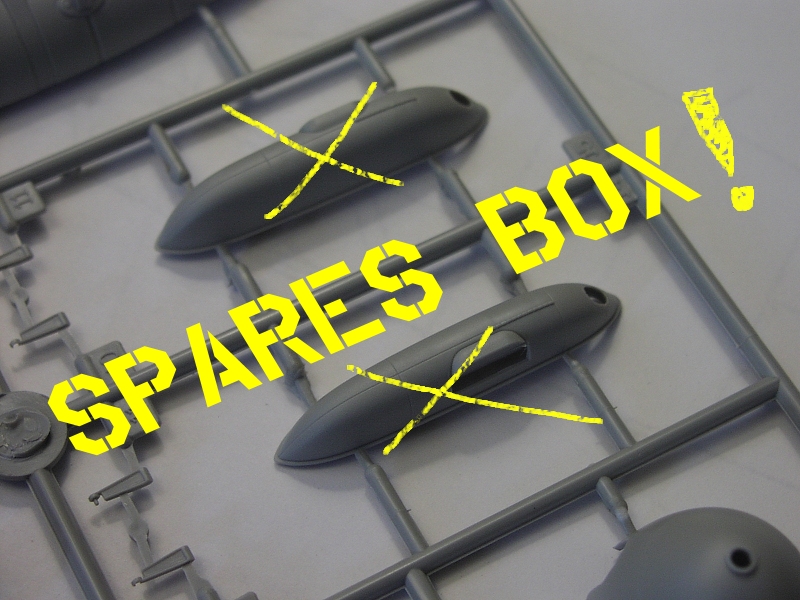 Many differences occur in fuselage and wing access panel locations for the K-4 but none of these are noted in the instructions thereby leaving the modeler to blissful ignorance, or forcing him to stop building the model and turn on the research machine. These are not show stoppers, but these oversights contribute to the feeling that the mighty K-4 release is just a quick “re-bag” with new decals.

The 109 series from Trumpeter has been a great addition to 1/24 scale, but it has some flaws that need to be mentioned here, even at the apparent end of the line.

While overall shape is quite good, there is a scale problem in the fuselage length and this occurs most notably forward of the rear cockpit station and extending to the spinner. This error ends up forcing some of the cockpit detail to be aligned inaccurately. The thrust line of the fuselage is also off and the entire engine assembly is slightly down-scale, this creates some exaggerated gapping at the openings for the exhaust stubs. While most folks won’t notice these subtle size problems, 109 fans might see the entire nose section as looking slightly odd. The thrust line is a bit high and this gives the front of the plane a less aggressive character in this reviewer’s opinion.

Specific visual traits in the K-4 are the removal of the “mast” antenna used on G models, the DF loop present and moved aft, the retractable “tall” tailwheel and its actuated doors, articulated main gear doors, the Erla Haube canopy and Galland Panzer armored headrest. While these are all supported in the kit, many of them require some real butchery of the older parts outlined in the instructions. 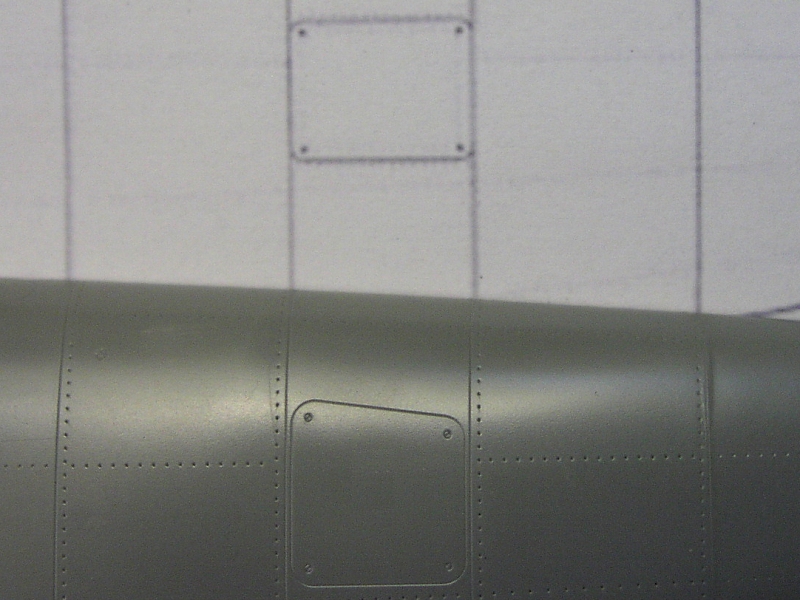 The 109 experts may be disappointed by this release if expectations were a new-tool effort from Trumpeter to revise the shape issues introduced early on in the series. By using only previously released sprues Trumpeter has taken the easy road to releasing a K. No business fault can be found in that logic to be sure, but the result of this kit out of the box will bring mixed results.

With incorrect cockpit details, lack of instruction on proper changes, and some required elbow work to get a “real” K from it, this kit represents some dedicated work beyond simple assembly and paint. No big deal for the guy who’s dying to do whatever it takes to get a 1/24 K in the case, but more than this reviewer feels should be required. The soft research and lack of attention to detail in the instructions make the kit feel weak. Some simple fill and scribe instructions along with the deletion of the gun pods from the instructions and painting guides would have at least given the impression that the K-4 kit was given as much attention as the previous releases. The changes from the G-2 to the G-6 early and late, then on to G-10 release all received updated or additional sprues for example. Not here.

Either as a bed for a super detail, or an out of the box build the 1/24 Bf 109K-4 from Trumpeter has no competitor in its scale, save for its older cousin the G-10. But with releases at the quality level of the recent Me 262 and TBM Avenger in 1/32, this re-release of old parts will leave a die hard 109 fan disappointed.

No one at the office, or visiting your model showcase will ever know the difference between the G-10 and the K-4, but if you do, then you can be sure it’ll bug you if you don’t fix it. But unless you are tied to the decal offering you can make as good a K-4 from this kit as you can from the G-10 release…grab the cheaper one because you’ll probably need a few resin parts to help you get the job done right.