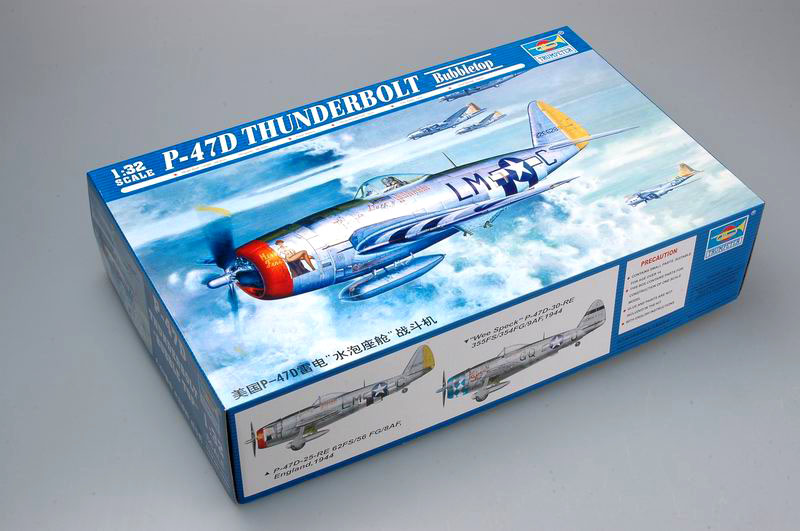 A Brief History of the P-47 Thunderbolt

Republic's big heavy-hitting P-47 Thunderbolt holds the distinction of being the most mass produced single-seat fighter aircraft in US history. From humble beginnings it was an evolutionary path rather than design innovation that brought the Thunderbolt to the light of day. Based on tried and true standards set by Seversky in the late 1930s, the P-47 shared design and construction elements with the Seversky P-35 and Republic P-43 Lancer. 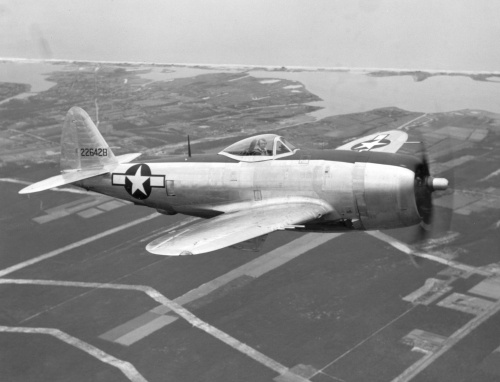 Tying these successful design elements to the massive 2000hp Pratt and Whitney R2800 engine gave the P-47 its sheer size, without doubt the heaviest single engine, single seat USAAF fighter of WWII. However as its size grew so did the evidence of the Seversky design genius. The rugged production practices pioneered by Seversky and carried forward to Republic Aviation translated this size into unprecedented survivability, and the proven elliptical wing design gave the Thunderbolt unparalleled maneuverability for its size as well as profoundly docile handling at extreme altitudes.

Originally designed with a "caged" canopy and a high "Razorback" spine, the Thunderbolt was modified with a "bubble" canopy for the production run of the D-25 version. All subsequent Thunderbolt variants used this high visibility canopy. Some lateral stability issues during flight tests found that a fillet for the fin was needed now that the high spine was removed. Some of these were applied to Thunderbolts in combat theaters as field modifications, and the fillet was officially adopted during the production run of the D-30.

The folks who understand the importance of the role that the Thunderbolt played in the air war of WWII are the types that have taken the time to look deeper than a pretty profile; the P-47 was a workhorse. There was an old saying amongst ETO fighter pilots that said "If you want to get girls; get your picture taken in front of a Mustang, but if you want to get home, drive a Thunderbolt." Indeed the pilots who flew the P-47 were endeared by a bond between man and machine that grew more and more personal with every bullet the Thunderbolt absorbed.

And while the glory goes to the prettier fighters it should be noted that the highest scoring fighter group (air to air victories) in the ETO flew the Thunderbolt exclusively, in fact when asked to turn in their P-47s for the newer P-51 Mustangs, the CO of the 56th FG (then Col. David Shilling) flatly but politely refused, preferring to stay with what the group knew best, and perhaps pay some homage to the fighter that got them home time and again. 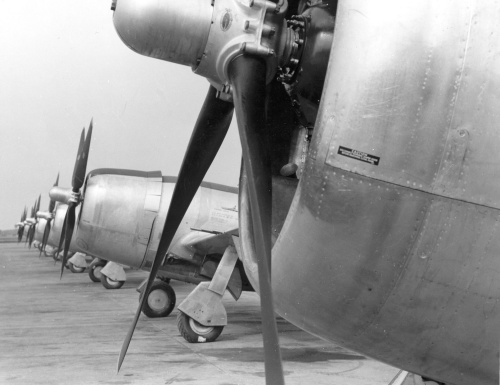 Trumpeter recently released their 1/32 P-47 Thunderbolt "Razorback" kit, which we reviewed here on the site. While the review is very positive overall, there are mixed feelings among modelers about two aspects of Trumpeter's first Thunderbolt; the rivet detail on the surface, and the addition of the Thunderbolt's complex turbo system (which is almost completely unseen once assembled). This new kit of the Bubbletop includes both of these elements as well. While neither is an offensive addition, some folks feel that the steep price point can be traced to all the extra parts needed to make the turbo assemblies.

462 parts on 17 sprues make up this big jug and all of them are duplicates from the Razorback kit with the exception of the fuselage and canopy/windscreen parts.

Full sprue shots of the Bubbletop can be seen on Trumpeter's website.

While the earlier razorback kit could be built to represent Thunderbolt variants from the D-15 through the D-23, this kit is limited to only the D-25 variant through the inclusion of a single corrugated cockpit floor part. The corrugated floor was replaced during the D-25 production run with a smooth floor that remained standard on all P-47s from D-26 through M and N models. While not a "hard" limit to the average Thunderbolt fan, any detail hound might need to replace this part if modeling another variant. Indeed many other parts are rendered "spares" like 3 of the 4 propellers (if modeling the D-25 as the cockpit part would suggest), and the "zero-length" rockets that were used on the D-40 and beyond.

One of the marking choices for the kit is a D-30 called "Wee Speck." The D-30 had dive brakes and the landing light moved to accommodate that feature. Trumpeter does not include wing parts that support dive brakes. The parts are laid out for them, however they are not included. A D-30 variant cannot be accurately made from the parts provided.

4 propellers choices are provided here, the D-25 used the Hamilton standard, and the D-30 used the wide-blade Curtiss.

The Thunderbolt's complex turbo supercharger and related ducting work is all included here as in the Razorback version. While virtually ALL of this structure and detail will be lost when the fuselage sides are sealed up, they do invite the brave to perform what could be a jaw dropping cutaway with very little effort. Without many rivals, the Thunderbolt's intricate and elaborate ducting and venting system is a lesson in aero-engine development. This system alone could be assembled and finished as a special interest piece and would surely be intriguing.

Another set of parts that will be hidden is the firewall and engine mount assembly. Very nicely detailed this area is complex and again could be revealed with relative ease by removing a few forward fuselage panels. Perhaps Trumpeter planned a clear fuselage part but did not follow through...? If these "hidden" details do nothing at all, they smooth the path to super detailing by providing structure and detail that would be exceptionally hard to tackle as a scratch-building project.

The cockpit detail is very good. Indeed with the exception of the trim wheel area and the throttle quadrant all the detail in the cockpit is vastly ahead of the new Hasegawa kit. The rudder pedals are inaccurate to some degree, but a nice photo-etched harness is included, as well as a high quality film and clear (sandwich) part for the instruments. The late war K-14 gunsight is provided along with the more appropriate early war sight, the K-14 was not standard on Thunderbolts until the D-40, and again, neither were the zero-length rocket launchers. On the photo-etch fret there are airflow "splitters" provided. This is a great solution for these parts. Hasegawa molded them directly into the wing parts and in some cases force the modeler to remove them with a hobby knife. This problem is overcome here with the photo-etch parts to be added if needed.

The wings are engineered to showcase open ammo and gun bays on both sides. The fifty caliber guns are well detailed (with minor fit issues) and rubber ammo belts are provided for each gun bay slot. The feed chutes are very nicely molded with ammo sculpted in. This may be a barrier to modeling the ammo bays empty. Both raw barrels and sleeves are provided as options for the guns. Both barrel types also provide hollow ends through slide molding techniques.

All flying surfaces including rudder, ailerons, elevators and flaps are pose-able This is a very nice feature, and it reflects a well thought out kit overall.

The gear bays are adequate but not special, some detail is fairly bland here and inaccurate. However they do feature a separate piece for the main gear leg actuating cylinder which is a nice addition.

The main landing gear is modeled well, but again not special in any way. The scissor links are bland and thick, and the main gear legs are a single piece with molded-in detail. Two hub types are provided, flat and spoked. Again rubber tires are featured.

Three sets of wing tanks are included covering all the tanks that the P-47 carried, as well as the centerline 108 gal "pancake" tank. Pairs of 250lb and 500lb bombs are also included along with the late war triple tube bazooka rocket launchers.

The clear parts are well done, thin and free of distortion. The now-classic textured areas for canopy rails has been discontinued on this kit. Landing lights, instrument panels (two variations) gunsights and armored glass are all included.

The instructions are clear and concise, and the painting guide is in color. Only a single profile is provided for the D-30 "Wee Speck" while "Miss Fire" gets a full four-view color profile. 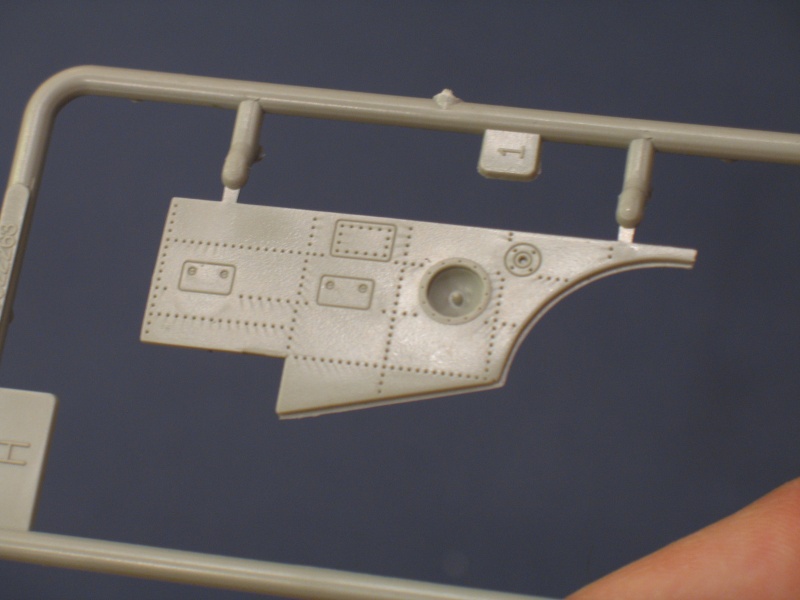 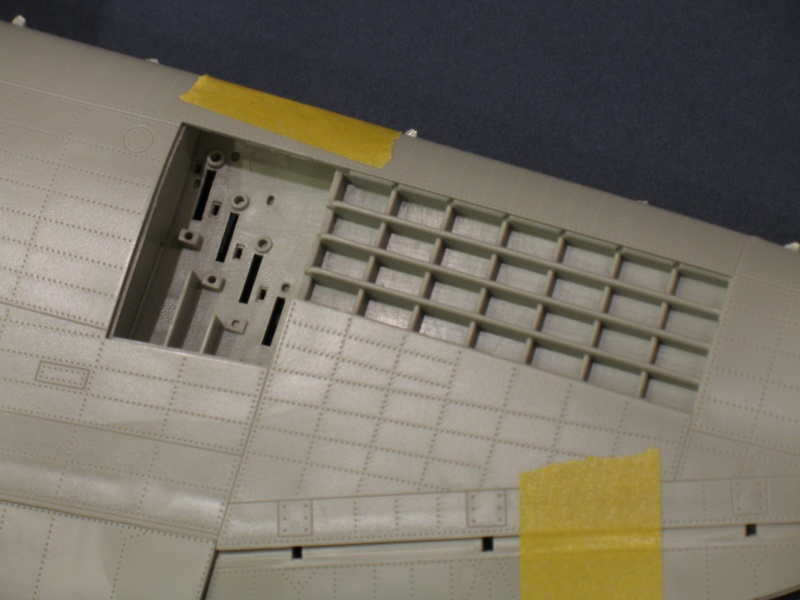 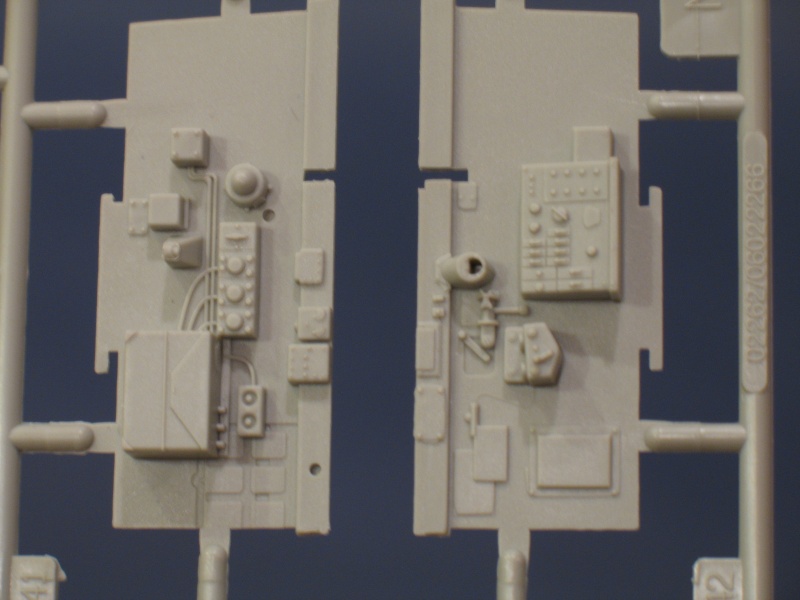 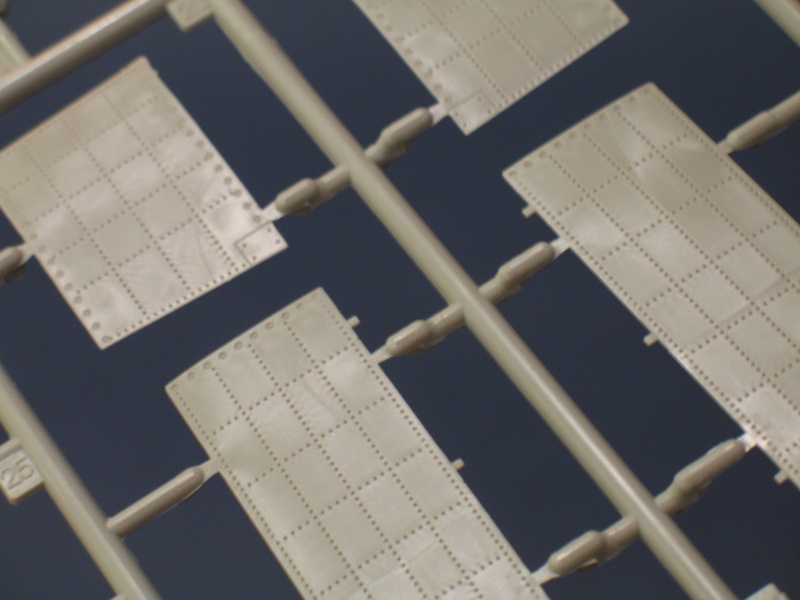 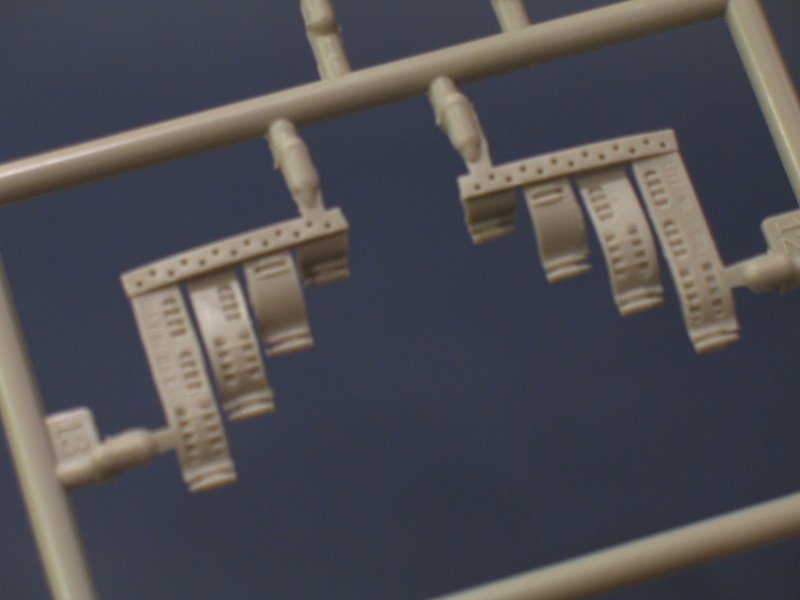 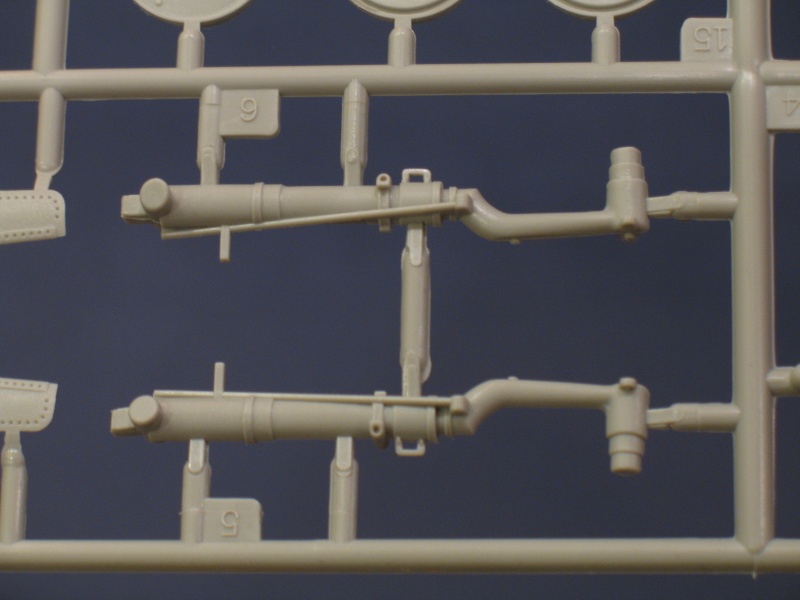 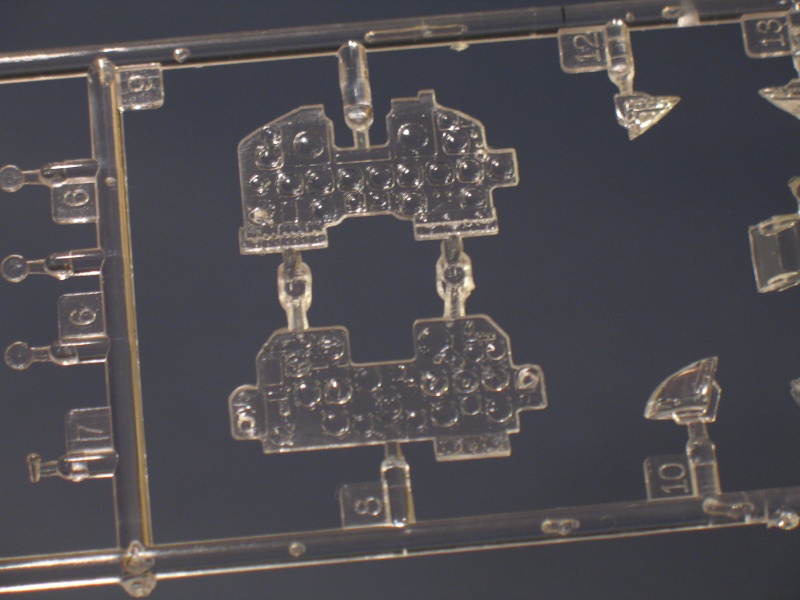 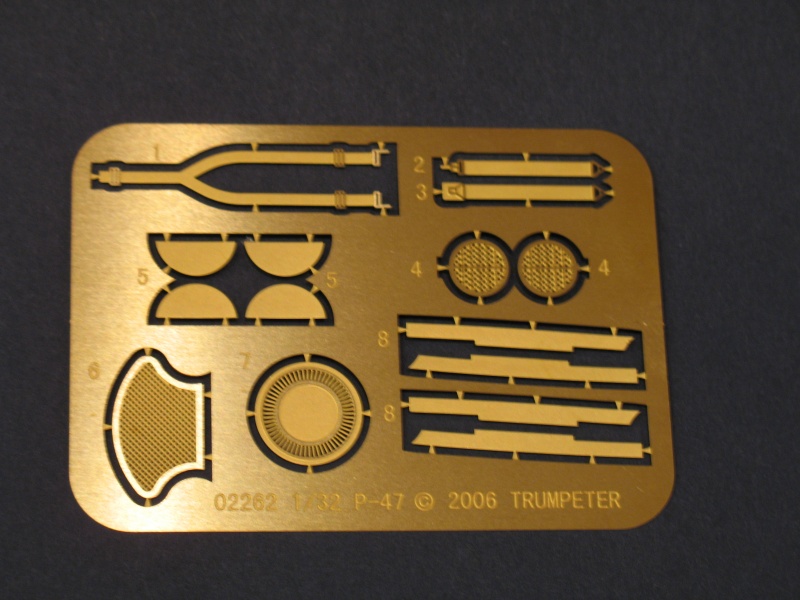 The bubbletop kit is on par with the razorback's accuracy save for one item. The windscreen included here for the bubbletop kit is misshapen in two areas. The "wash out" of the windscreen frame along the bottom (where it meets the fuselage) is too thin and shallow. The second issue is the windscreen glass itself is shaped incorrectly. The top of this piece on the real aircraft is arched but not rounded, and the the frames along the descent to the front bottom frame are straight. Trumpeter molded the frames too aggressively curved. Some folks may not even notice this, however when compared to the recent Hasegawa bubbletop part, the Trumpeter offering exposes some simplicity and lack of accuracy that's hard to ignore. 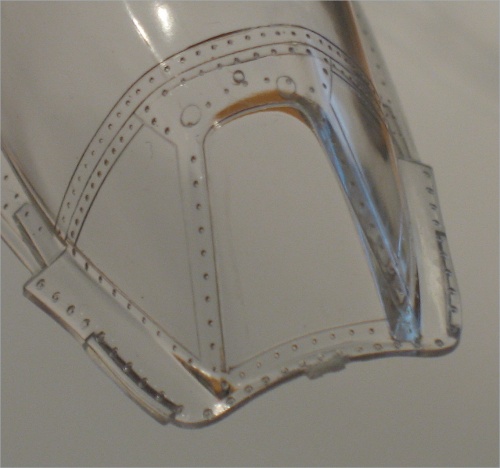 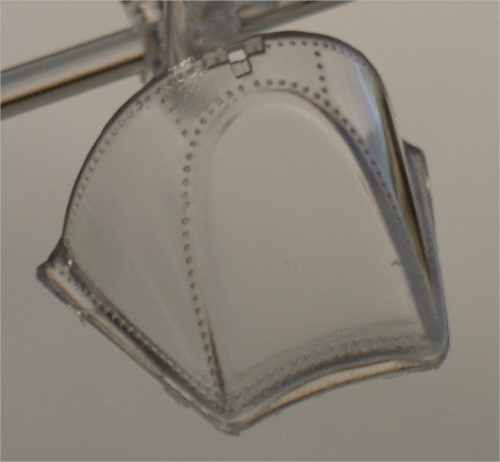 Hasegawa's windscreen on the top, and Trumpeter's on the bottom.

Decals for two aircraft are provided, a D-25 from the 56th FG, and a D-30 from the 354th FG. These are by far the nicest decals I've seen in a Trumpeter release, and while that might seem like it's not saying a lot, these decals are quite nice. Finally the national insignia are done correctly, and the color separations are very well done. A very nice set of stencils are provided as well. Many sources suggest that 56th FG Thunderbolts had two underwing insignias, and if you plan on doing "Miss Fire" you may indeed need to source another insignia as Trumpeter only provides four. Two for the fuselage, and two for the wing top/bottom.

A separate full color water-slide decal is provided for the nose art on "Miss Fire" that is very nicely done.

While an overall excellent kit, the Trumpeter Bubbletop has a few flaws.

Beyond that there is not much this kit does not deliver on, indeed it features too many parts and more options than one could use even over two builds.

If a super detailed job is planned the landing gear will be the weakest link, and will have to be addressed in earnest.

This is a good kit overall, but as a Thunderbolt junkie I personally can't see overcoming the windscreen issue. It will build up into a great looking Bubbletop out of the box however and it has plenty of ordnance and detail for dioramas or super detail jobs.

For anyone wanting to cut open a large scale Bubbletop Thunderbolt for a super detail job, there can be no better alternative than this kit. Given the subject and size I cannot see any more complete Bubbletop kit hitting the 1/32 market, even in the distant future.

Here you can see the basic airframe taped up. 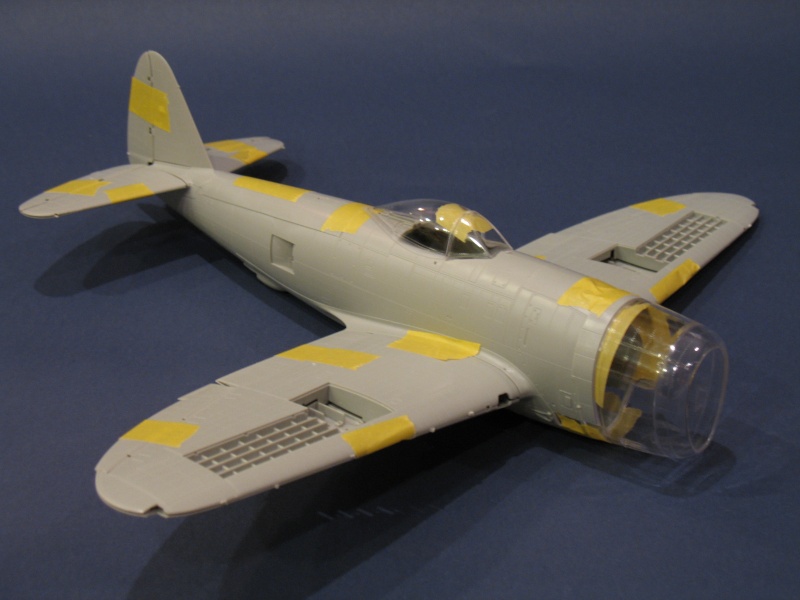 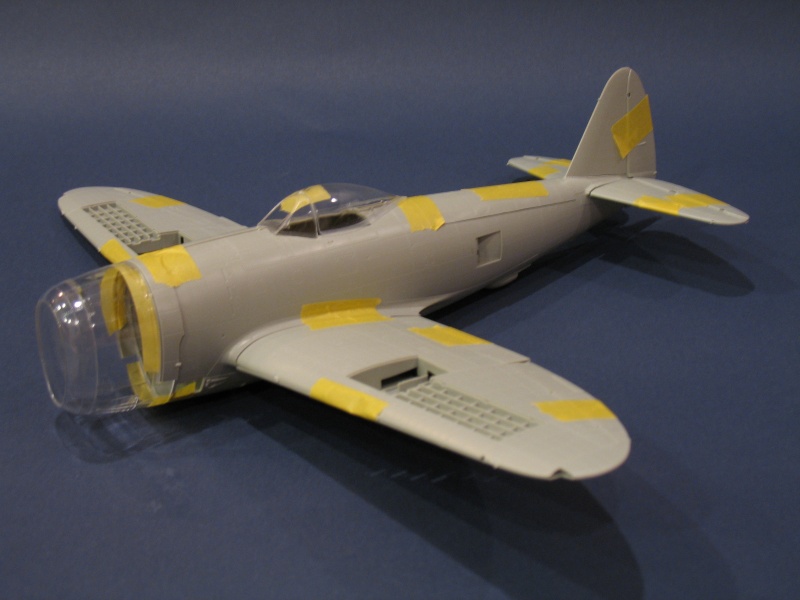 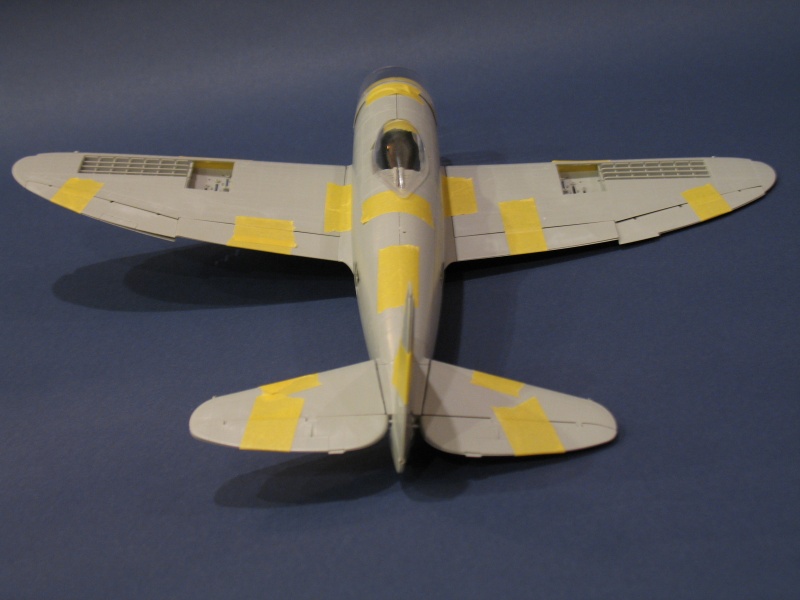 The kit is recommended.