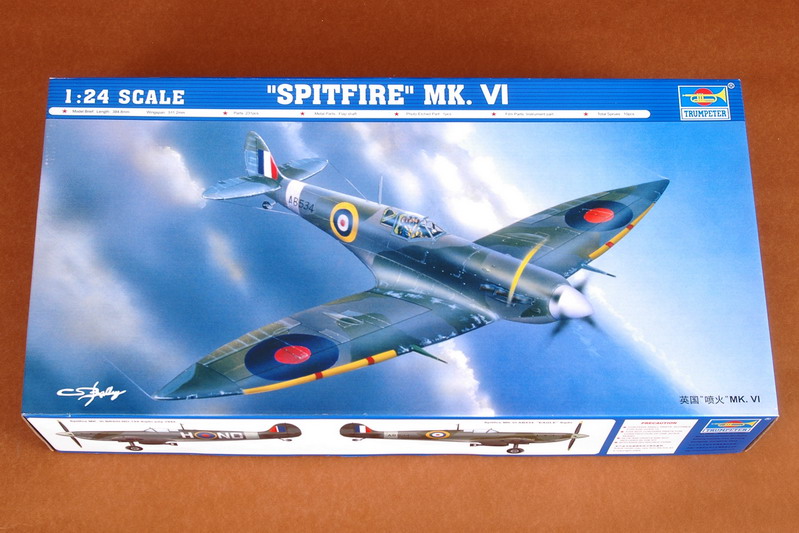 The Spitfire is without a doubt one of the most famous combat aircraft of all time. Its rich history and development lineage is widely known and I won't attempt to outline it here, however some information on the Mk VI seems a good idea given the kit's focus. The Mk VI was an interim marque based on the successful Mk V airframe. 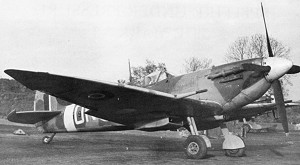 The primary changes all focused on delivering better performance and combat operations at higher altitude in the role of interceptor. A new 4-bladed propeller turning on the more-powerful Merlin 46(47) with a better supercharger design provided a bit over 1400hp. This along with an extended span (just over 40 ft) highlighted by triangular replacement "tips" were the Mk VI's primary airframe changes but unfortunately these did not deliver the stability and power needed to operate well at extreme altitude. A pressure cabin was fitted between the cockpit bulkheads and a non-sliding hood added to seal the office. However this was not a true pressurized cabin of the quality we see in modern aircraft, and only provided "extra" pressure (not sea level) at altitude still requiring the pilot to use oxygen. In order to complete the pressure cabin a unique canopy design was needed as was sealing up the classic cockpit "door" on the port side under the sliding canopy. Indeed the sliding mechanics were replaced completely with a sealable unit that was closed prior to take off and removed again on return to base...from the outside! The bulky sealable sliding rails for the pressured canopy were very different from earlier marques, and the canopy itself had a rubber seal around its edges. Unable to fulfill it's designed role, Mk VI production was canceled after just under 100 were built using Mk Vb standards and all used the B wing design.

This is largely a re-box of Trumpeter's Mk V and contains only a single new sprue that provides the wingtip parts and new propeller. All else with the exception of new decals is retained from the earlier kit. Indeed this review could easily provide a good look into both the Mk V and Mk VI boxings.

In short Trumpeter's usual sturdy box holds what is basically their Mk V kit with some extras. Given the short list of differences between the V and VI Trumpeter has made a sound business choice here...or have they? Given that the Mk VI production run was so small, and that the mount made no pilots "famous" it is hard to imagine that this variant could be seen as a "hit waiting to happen" like later marques surely would. Can anyone deny that a 1/24 Mk IX would be a great move? While this reviewer sees real method in Trumpeter's delivery of their 1/24 Bf 109 series, both the Mk V floatplane, and now the Mk VI seem to be a much more clumsy and listless lineage for their Spitfire line in this scale.

Full sprue shots can be found on Trumpeter's website so I won't toss the bandwidth on them here. All of the usual Trumpeter suspects are present with the pin/hinge system for moveable flight surfaces, a rubber sprue for tyres and some engine harnessing is also included. Surprisingly a set of three fantastic resin pilot figures is featured. I do know if these figures were offered in either of the past two Spitfire kits, but they are very well cast from brilliant masters and would bring real life to a diorama effort. 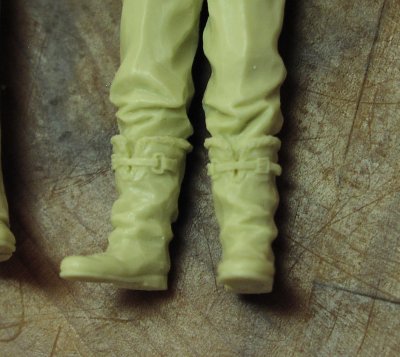 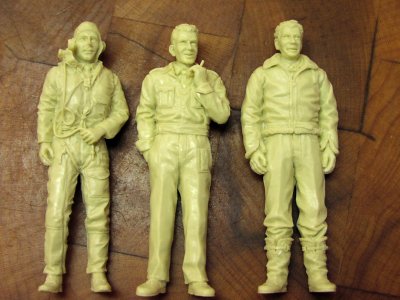 Overall the kit detail is crisp and bold. The cockpit is well appointed and detailed, and features Trumpeter's now standard film-under-clear panel and instrument system. This brings very nice results although the clear panel seems a bit thick. Good throttle and flight stick detail are present along with a very nice gunsight. The office should build well as is and some standard weathering techniques will no doubt bring all the detail to life. 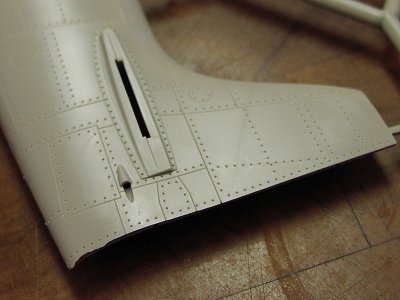 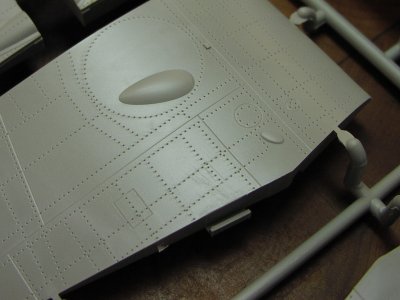 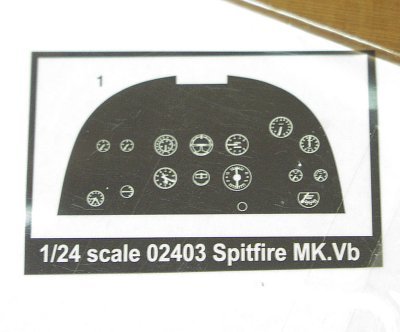 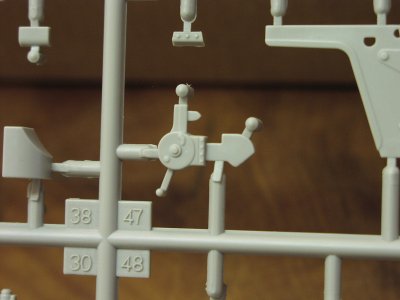 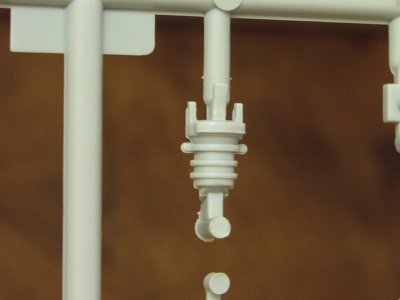 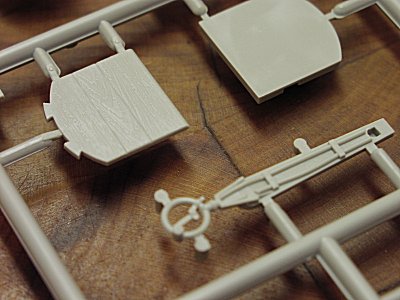 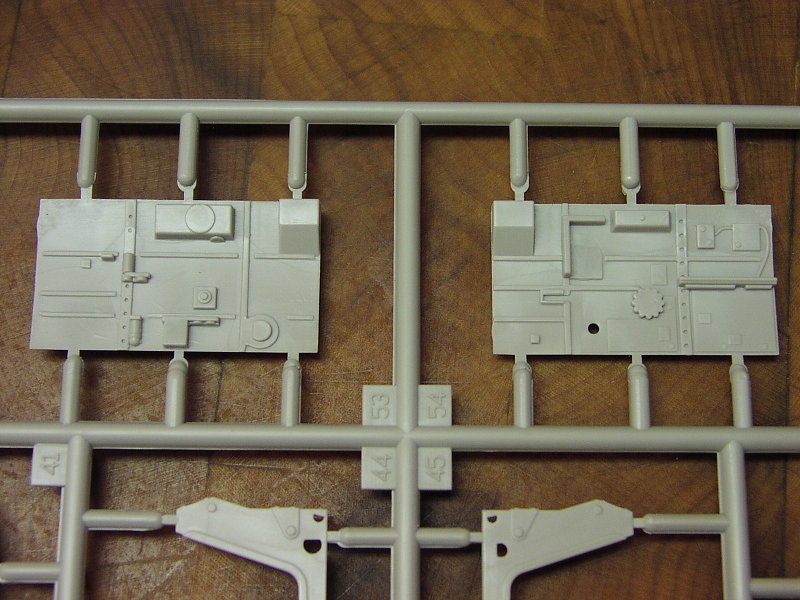 The fabric detail on the tail feathers is a bit heavy for my taste, but looks accurate. In one case some of the parts appear to have been sent to manufacture with either unfinished, or sloppy masters as is evident from some scaring that is molded into the parts. Having made a few masters myself I recognize these scars all too well as scribing slip-ups. Seems these went unnoticed in the final quality assurance pass. Full gun bay and gun detail is provided with separately molded access doors and ammo drums/belts for the 20mm guns and the .303 machine guns. These are also well done and only some barrel hollowing would be suggested. The Merlin engine is frankly stunning. With many parts including the pliable rubber harness, its no wonder that the clear "cheek" cowling parts were offered. Strange that a pair of solid plastic cheeks are not also supplied but if one chooses to paint the clear ones it should be easy enough. Perhaps the only drawbacks here would be the difference in sheen of the clear surface for painting, and the more brittle nature of the hard clear styrene. The clear parts are well detailed and very delicate. Some bend was required to dry-fit both the screen and canopy and this may be an issue in assembly. 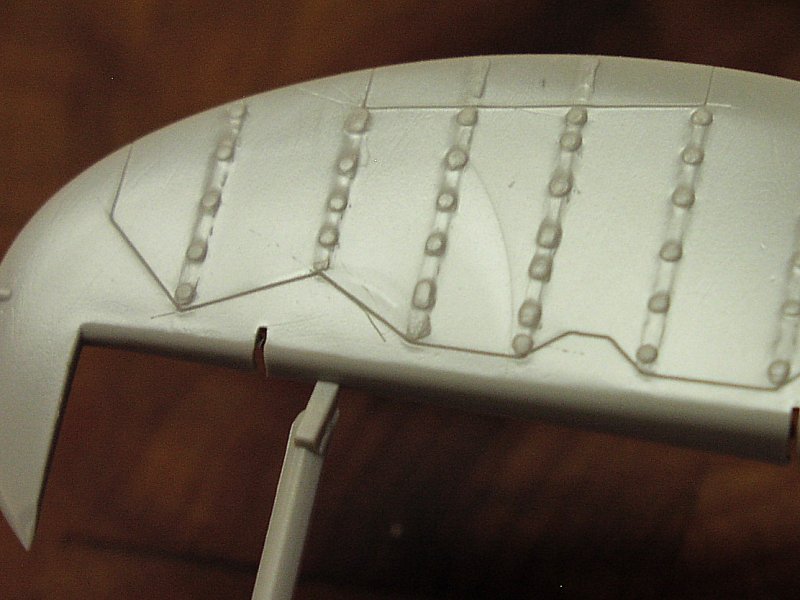 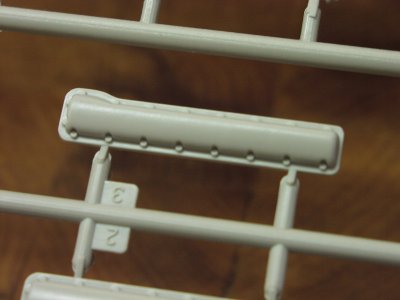 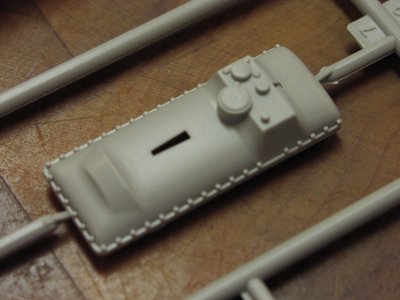 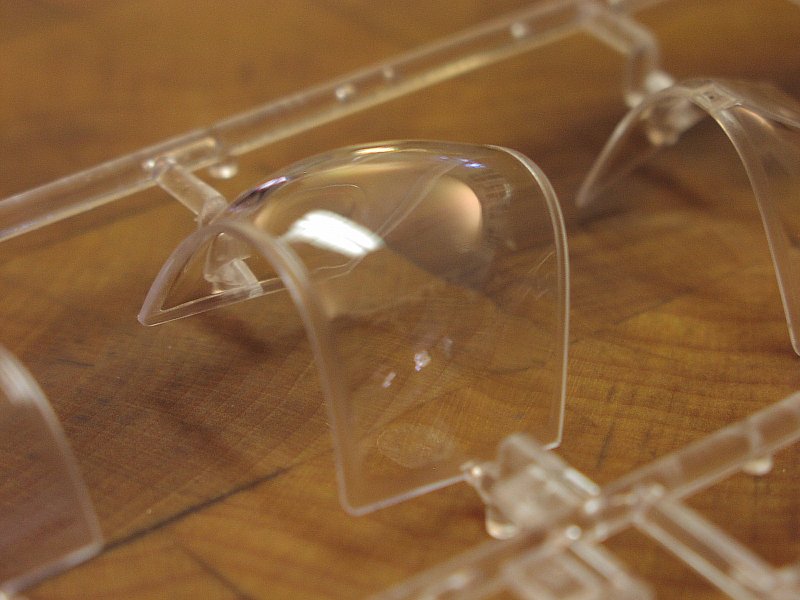 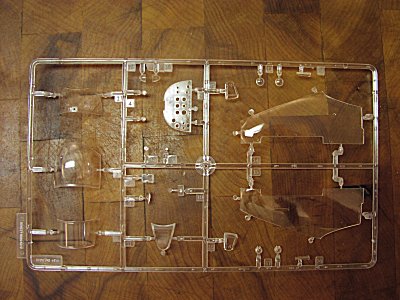 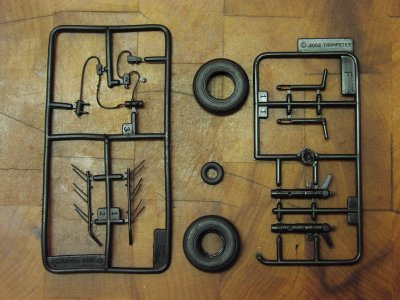 There is nothing provided to replicate the sealed Cockpit Door, nor the changes made on the Mk VI's canopy and rear glazing, and again all that is included to represent the VI is the single sprue shown here. It seems as though just the exterior changes for the MkVI are included. That said; the new propeller and cone are very nice and the wingtip parts retain consistent detail to the rest of the kit and offer good shape. The modeler must saw off the standard Mk V wingtips to fasten the replacements. 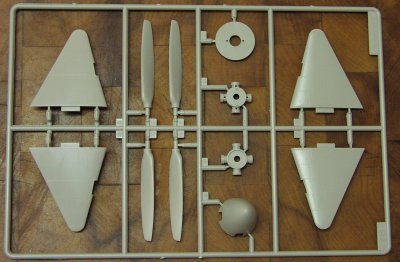 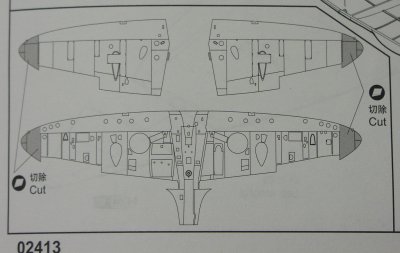 The decals look very nice, are thin and, in the review sample, were in good register. Markings include a 124 sqdn ship, and a fighter from the famed "Eagle Squadron." The wing and fuselage join has a nicely engineered tab system to insure a tight fit and proper dihedral. I taped up the major components and the ship looks very good and holds together solidly. 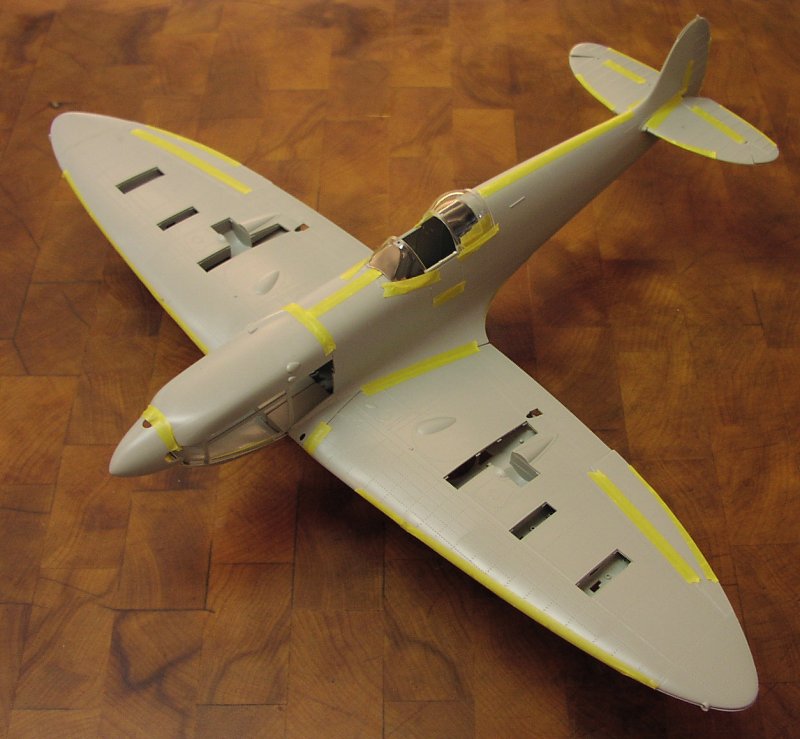 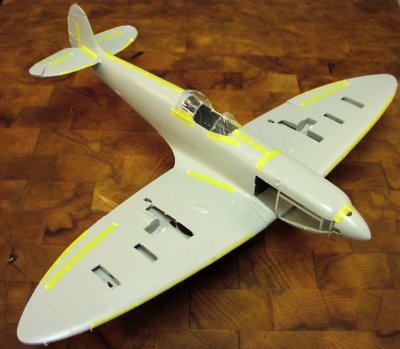 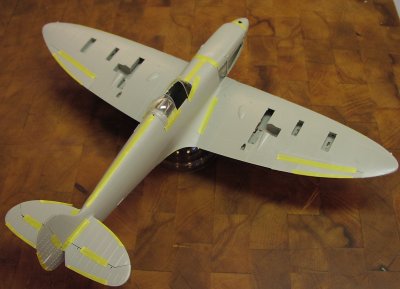 General shape is very good overall. The airframe and wings match nicely to trusted plans. I did note a slightly odd look to the windscreen angle when dry fitted, and this might be related to the poorly engineered fit here. The distinctive elongated wingtips and the 4-bladed propeller capture the look and feel of the Mk VI well.

One issue that baffles me is on the surface detail of the horizontal tail surfaces. One side clearly depicts riveted stressed-skin while the other side very much resembles a fabric covering over spanner ribs. As no marque of the Spitfire had fabric covered tailplanes this choice seems implausible at best. Corrected replacement items for all of Trumpeter's 1/24 Spitfire tailplanes can be obtained from MDC (thanks Vasko!). 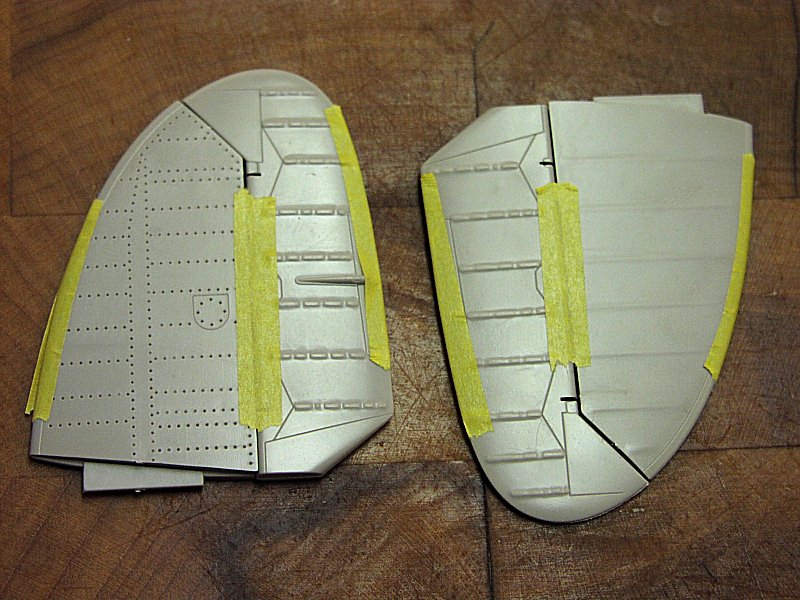 This will make a great build. While I personally doubt the market allure of the Mk VI in the first place, it is represented well here with the exception of accurate canopy system detail. Easily the best Spitfire kits in 1/24, Trumpeter has delivered well overall here without a doubt. I would hope that a Mk IX is planned although I don't pretend to think a Griffon marque will come in this series. The floatplane and now this Mk VI make the series seem as if its stumbling towards the ridiculous, but now that these are out of the way it seems the only way to go is up from here.

Thanks to Stevens International for the review sample.