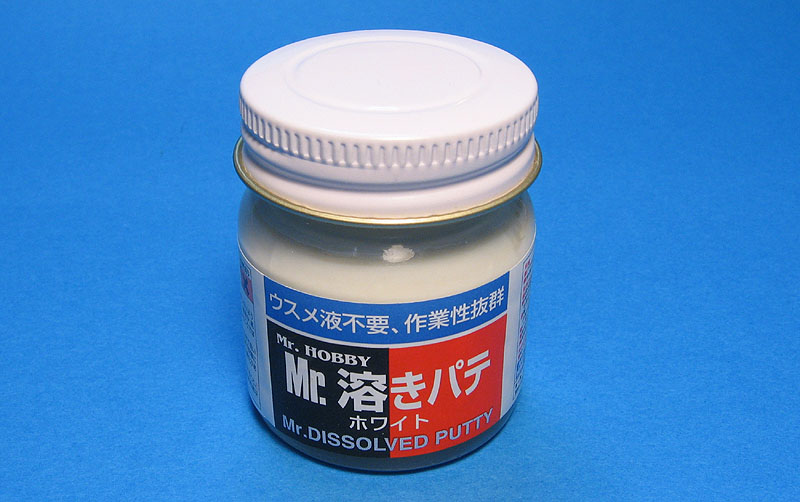 This is a short report on something I haven't paid much attention until I tried it. The name of the product says it all: dissolved putty. The official description by Gunze is ‘Mr White Putty diluted with thinner’. Knowing Gunze’s white putty (superior to Squadron’s one, in my opinion), I decided to give it a try.

This is an excellent product. And before you mention it, it is not the same as Mr Surfacer. We’re talking about a completely different product here. I like Mr Surfacer, but when used to fill seam lines and small gaps, it has the annoying characteristic of shrinking so much that a second or third pass becomes necessary. That’s the difference to Mr. Dissolved Putty. The former is a primer to surface finish, it was not designed to fill anything other than small scratches and seams. The later still is a putty, but with an almost liquid consistency. I said almost, it won’t run over the sides, but preserves the capillarity to enter into the smallest seams. It stays where you put it. Its viscosity is like a very thick paint, so you can apply it with spatulas or flat toothpicks, if you want. It will still shrink, but much less than Surfacer, and won’t need a second hand.

Even better, you don’t have to wait it to dry. You can remove the excess with a tissue paper right after the application and it won’t harm the plastic (ideal for clear parts seams, for instance). I didn’t bother to find out exactly which is the thinner used. I wipe off the excess using facial tissue dampened with isopropyl alcohol or even water.

But maybe the property I like the most in Mr. Dissolved Putty is its sandability. Extremely easy to sand, yet it won’t crack like regular putties and can be polished to a shiny finish. It comes in 40g bottles (identical to Mr Surfacer bottles) and will cost 4 to 6 USD.

Another nice product from Gunze. Recommended.