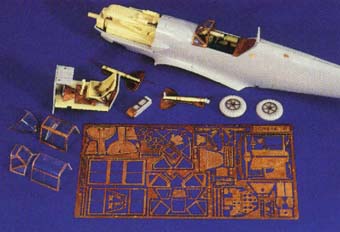 Verlinden is just another name for quality resin and photo-etch. The set is old news, but I saw a lot of questions on the rec.models.scale group and a review can't hurt. So the set is composed from one fret of PE parts, some different diameter wires, a printed instrument film and 35 resin parts. The resin parts are very well cast, no bubbles, separation blocks..the whole works. This is not a full review since I built only the cockpit on my JKRV's Bf 109. The constructions starts off with the cockpit, some PE bending is necessary for the complicated seat frame work. It really looks nice when finished, but when the seat is in place, it doesn't really shows that much-which is an absolute pity. The trim wheels are good but require clean-up. Glue a spacer-block/tube between them. The rest of the cockpit is straight forward enough. Some facial tissue and some wire bending finishes off the cockpit. And what a cover this cockpit has!! The best thing about the set was the PE frames for the cockpit hood. You really must replace the Hasegawa's clear plastic parts with something (I used the very thin glass thingy used for viewing specimens with a microscope) The next thing is the undercarriage. Verlinden offers new struts, which is good, new hubs, which is also good. But a lot of work is still to be done in the bay. You MUST shave off the kits bay if you want to make it look right (like with any other 1/32 kit) I recommend that you use the landing gear covers in a combination with the kit part. Sand down the original cover to paper thickness. Then glue the PE on, so you have the right size wheel cover with rivets on both sides.

As said I didn't build the engine, so from now on this is only an opened-box review. The engine is the best in-line engine in this scale. It consist of 12 resin and a couple PE parts. There are only two things that didn't agree with me; there are no details on the underside of the engine, which is a shame, but Verlinden obviously decided that the set gives you only the components for opening the upper hood. But cheer-up if you are going to detail the hole engine, you are not in for a lot of work. The second thing is that Verlinden didn't produce new exhausts, since the Hasegawa ones are ucky! Scratch-building is the only way. The supports for the engine are fabulous, but don't quite fit the pin points cast on the engine. The front portion (barrel, muzzle) for the cowl guns is provided. I recommend using the Ulrich Puchala gun and combining it with the Verlinden barrel. If someone will convert the engine to an DB 605, he is in for quite some work, but the core is there. However converting a 601 to a 605 is still a lot easier then scratchbuilding an Sabre V engine...

I have no doubt that this is one of the best update set in this scale. If you are building any of the Bf 109 family, buy this set!