In what is probably Meteor Productions' last resin production, this is their largest and most ambitious conversion. It requires and converts the Tamiya F-4J Phantom kit into the F-4K /M, better known to Brits as the FG.1 (navalized) or FG.2 (RAF version). This conversion set it based on Dr Frank Mitchell's award winning spectacular conversion that he did a few years back, with some revisions.

The FG.2 was the answer 'pushed' onto the RAF after cancelling the TSR2 and P1154 programs to replace the short-range Lightnings. It also gave the RAF a true multi-role fighter, one capable of Mach2 and carrying a wide array of armament or 16000lb of bombs. One requirement of England's purchase was the aircraft had to be 40-45 percent produced in the UK. One of the changes was the use of Rolls Royce Spey 202/203 engines. These engines had more power than the J79 and were thought to have more bleed air for boundary layer control, which would permit slower approach speeds. This would mean also that the air intake area needed to be 20 percent larger, and the lower fuselage area would have to be redesigned for the larger diameter engines. A slew of other changes were also made to make the aircraft fit the smaller British carriers or accept British equipment.

So what do you get in this huge conversion set? The largest and most impressive casting is the new upper fuselage part. It replaces completely the Tamiya part with no loss of detail. As can be seen in the picture comparing the two parts, the new fuselage is about 1/4" wider than the Tamiya part. The new seamless intake fits very well using the kit splitters. 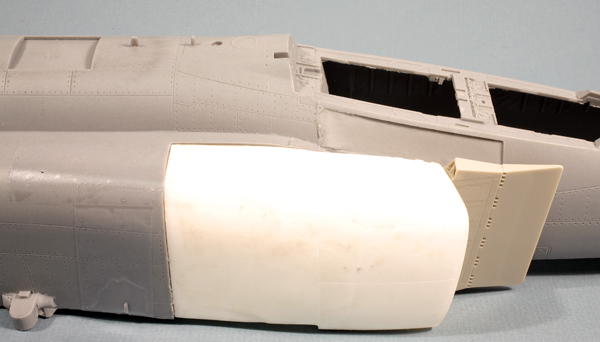 The other major part is the lower wing-bottom fuselage part. It is basically the original J part, with the front part flared wider to fit the wider intakes, and larger, more rounded bulges at the lower rear of the part. It also looks very good, with well formed changes and recessed detail nearly impossible to tell from the original Tamiya panel lines. The kit also includes upper wing parts, which are basically the same as the original Tamiya parts, that have been narrowed to offset the increased width of the fuselage. 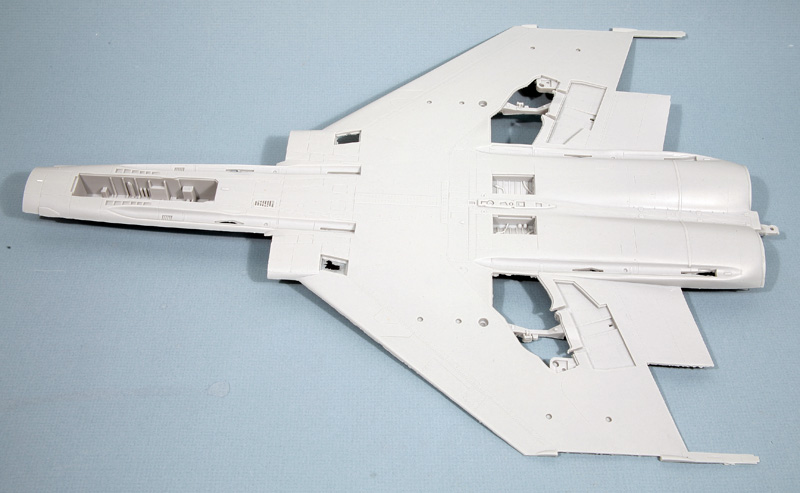 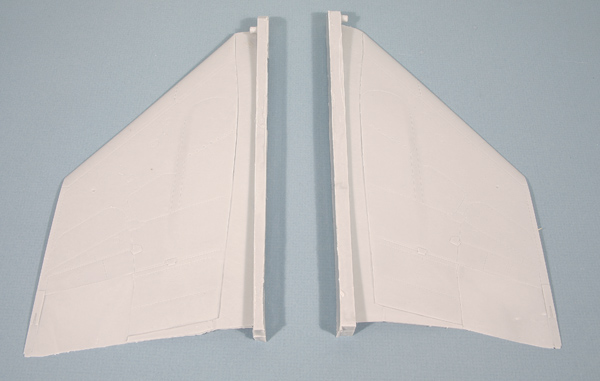 Moving on to what Meteor calls 'Bag 1,' this includes the optional WSO periscope, ILS antennae, fuel dump, catapult hook covers, MLG top wing stiffeners, ejection seat pull handles, and a set of intake supports/flow separators. All look good, except that you really need two sets of intake supports - one each for the left and right sides. Oops!

In Bag 2, we have the front engine turbine face, nozzles, aft engine turbine face, afterburner can, afterburner turbine face. While well cast, in my opinion this is the worst part of the conversion. For one, it appears to me what you get is actually the front turbine parts (2 pieces per side), the cans and nozzles, plus an afterburner cage. Again, to me, the instructions tell you to put the front engine parts together, then add them to the front of the burner can! If you construct it the way I think it should be done, it makes a nice face for the jet engine(see pic). However, you are then left with a solid afterburner cage for the back of the burner cans that looks nothing like the FG.2 cage (see ARC walkaround pics Here), and looks more like the part Revell gives you in their Mirage kits. This should have been a PE part with another turbine rear piece. Also, the cans themselves are simply the Tamiya parts cut down to work for the conversion. This does mean you could probably use the kit cage and rear of the turbine which looks better if not really accurate. The nozzle also is off as the entire part has the interior diameter of the closed FG.2 petals. It should increase in diameter inside of the petals. Of course, this would have been harder to cast but I think is pretty obviously wrong to anyone that looks at it closely. The easiest fix to this area would simply be to add FOD covers to the exhausts. I may look at using one of the Flightpath PE sets for the J or C/D models and seeing which is closer to the Spey, plus some scratched burner cages and maybe the Tamiya turbine face. This will require routing out the nozzles, but I think it could be done. I have enclosed a (rather lousy) pic of the nozzle and burner can mounted to give you an idea of how it looks. 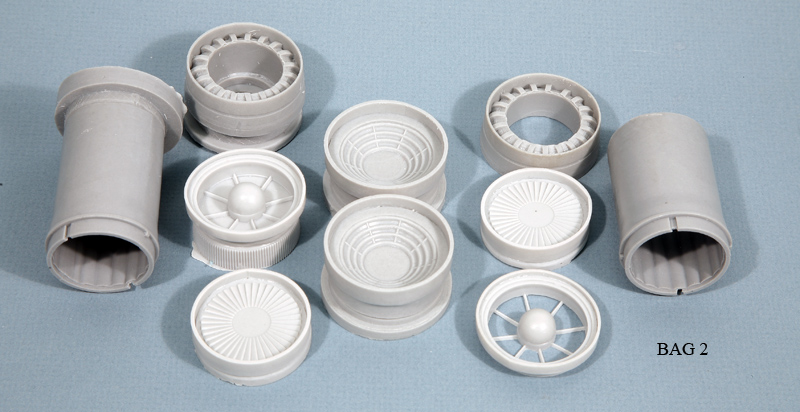 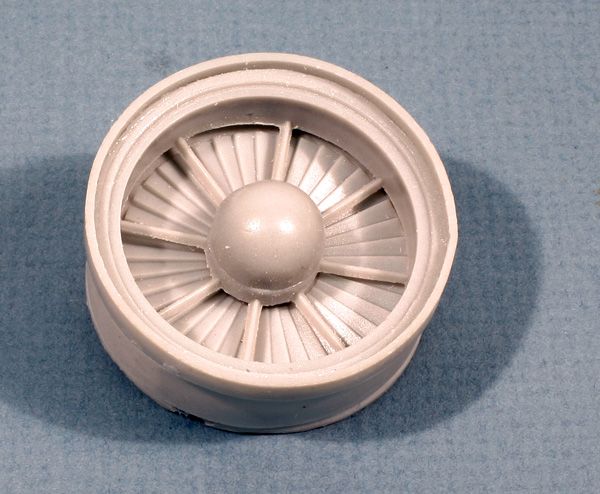 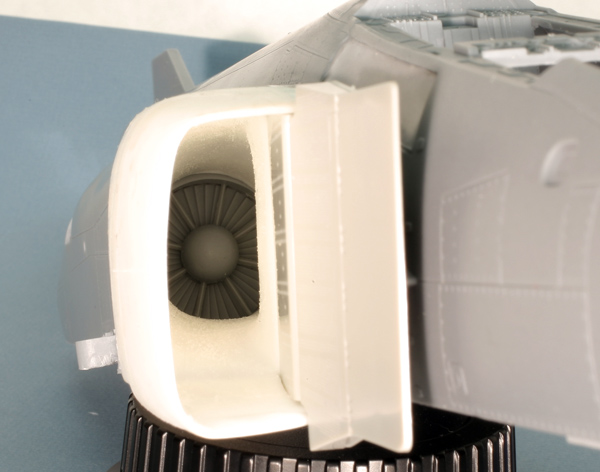 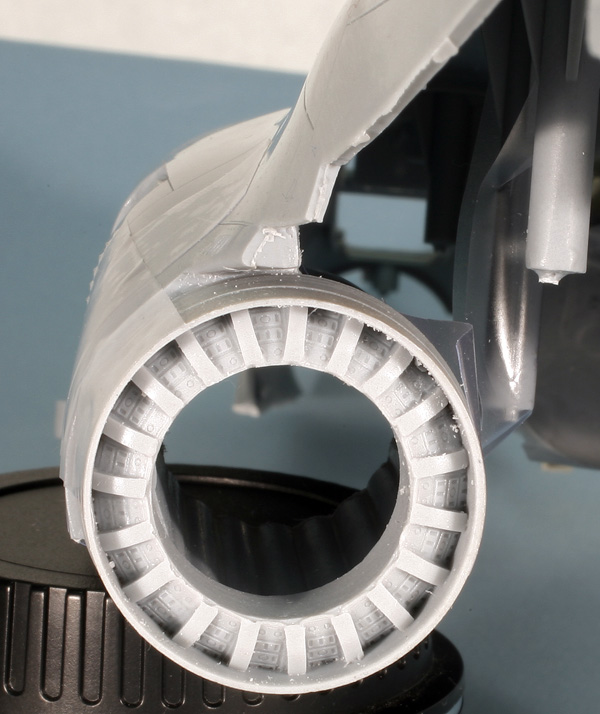 Moving on to Bag 3, we have the square fin cap, the pointed fin cap of the early aircraft, and a set of unslotted stabilators which were seen on some machines. Not much to say here, the parts look ok. 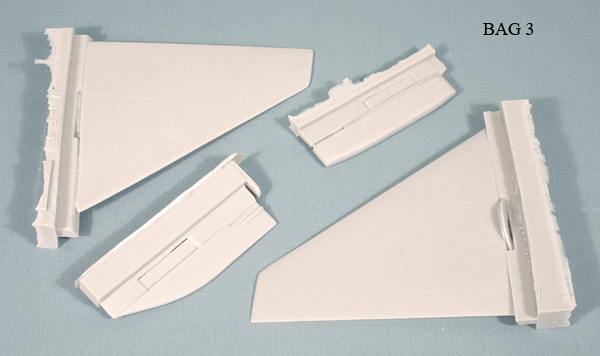 In Bag 4, we find the ejection seats. There are supposed to be two H5 seats with belts, and two seats without belts. If your FG.2 was equipped with H7's, you are on your own. My set includes 1 seat with belts and three without, but as I plan on modeling a late FG.2, I will need the H7's anyway. The instructions suggest the True Details seats in case you are interested. There are no other parts for the cockpit, save for the RSO's periscope. Looking at ARC's walkaround pics of a FG.2 cockpit Here, it is definitely close to a J cockpit, but as I haven't spent hours going over the pics vs. my Black Box cockpit, my guess is there are some detail changes to be made. You are left to your own devices here. I would recommend the Black Box (or Avionix now) cockpit as it is a beauty. 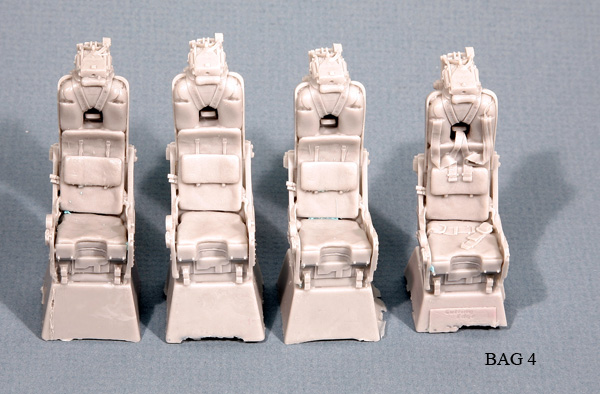 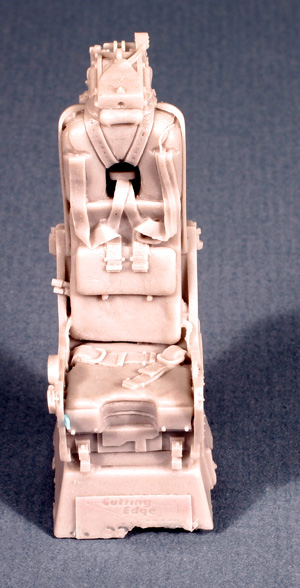 Bag 6 include the two seamless intakes molded in white, plus a new tail, or 'alligator'. The alligator looks unchanged from the Tamiya part except for shoulders added to glue the new nozzles to. I have attached the kit variable inlet to show the fit, which is very good! The 'alligator' has the only casting blemish I have found so far, a small hole that will have to be filled. 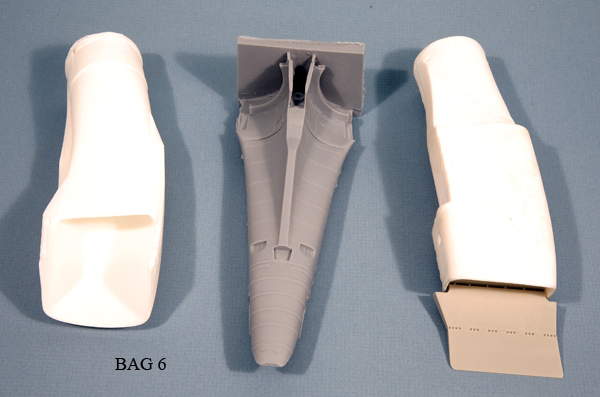 Also included in the set is a white metal extended nose gear strut for the FG.1. Wow is it long! It would be a great diorama of a FG.1 ready to launch on a flight deck with a fully extended strut. There is also a small set of Black Magic canopy masks. They are pre-cut, the cuts do not show in the picture. 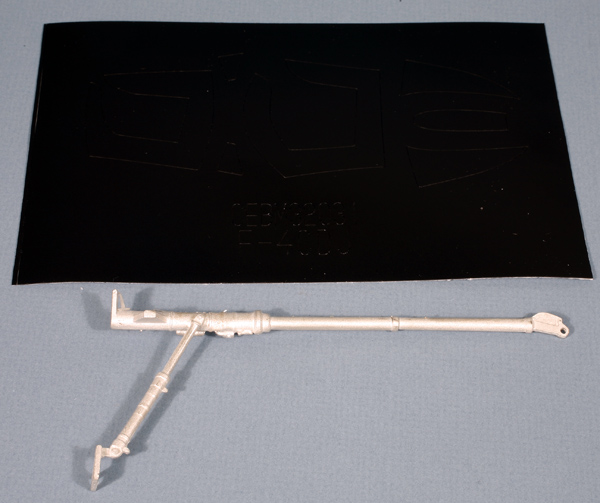 To round out the package is a great set of decals - 7 pages worth - plus a small sheet by Pyn-up of nose art and a sharkmouth. The decals cover 9 options. 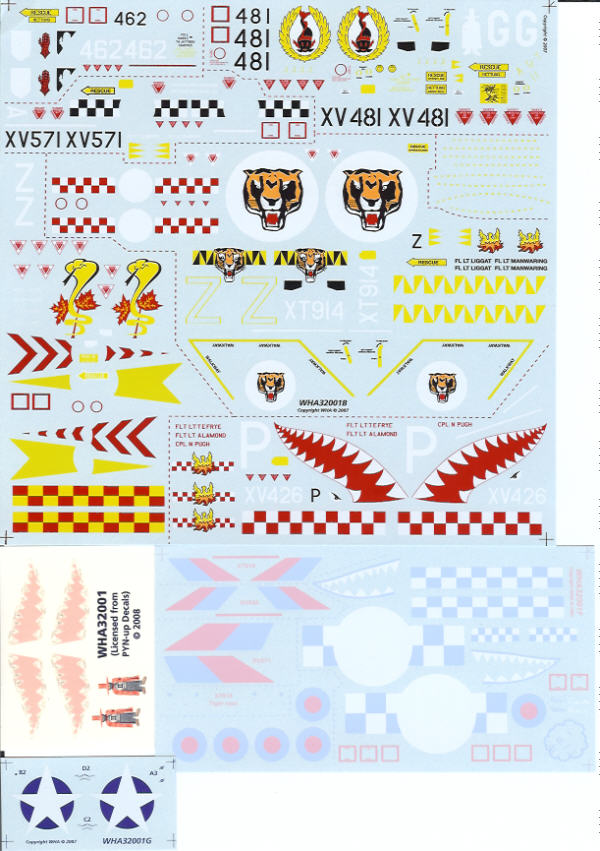 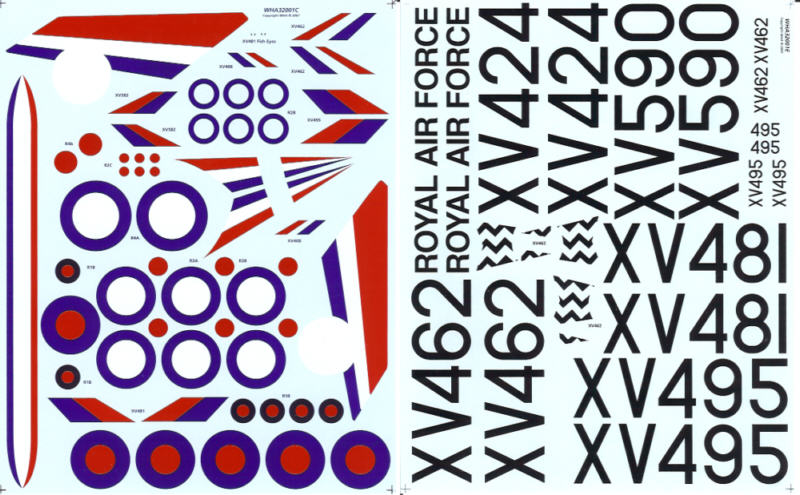 So that is it. I must note there are no British arms in the package, you must find your own if you wish to see a specific RAF loadout although they did seem to also carry Sidewinders and Sparrows. You can get a few types at Flightpath if you desire. I must applaud Dr Mitchell, first for creating the finished conversion to such a high standard, second for letting Meteor destroy it to create the master!!! I also applaud Meteor for a very well produced set. The castings are magnificent and had to be a hellish job to create. I do wish a little more was done in the afterburner area, but that is my only real complaint at this point.