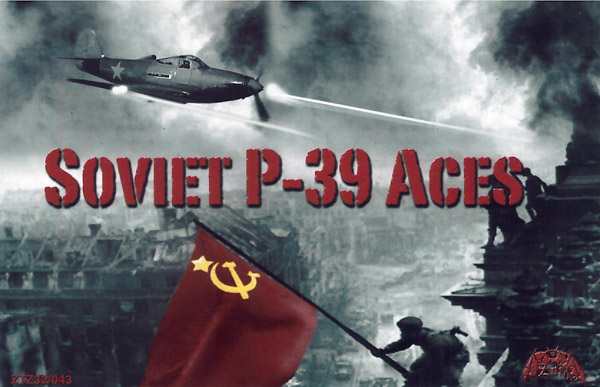 A recent release from Zotz Decals is this sheet for the P-39 Airacobra. Included are markings for six different colorful aircraft. Two sets are for the P-39Q, two for the P-39N, one set for an aircraft which could be a P-39 Q or N (the serial is unknown), plus a set for a P-400. Most of the aircraft markings can be seen in the Osprey’s book, “P-39 Airacobra Aces of World War 2.” I have a few notes and niggles with the interpretation of the markings so I will include those comments, too. 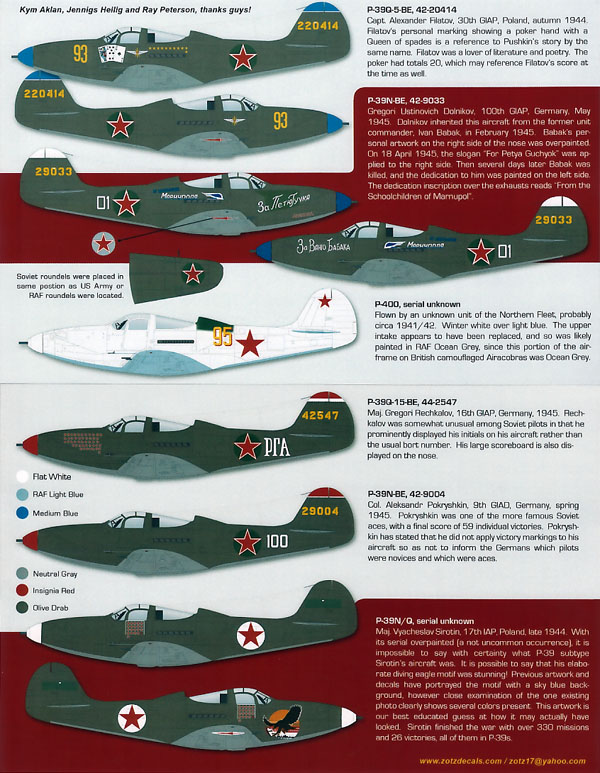 “Yellow 93”, a P-39Q-5-BE, serial #42-20414, flown by Capt. Alexander Filatov, 30th GIAP; Poland, autumn 1944. Filatov’s personal marking showing a poker hand with a Queen of spades is a reference to Pushkin’s story by the same name. The poker hand totals 20, which may refer to Filatov’s score at the time as well. The aircraft carries a blue spinner and top of the vertical stabilizer and rudder. Note: This set is well done, but the ace of spades should have scroll work around the perimeter of the card. The photo, in “Stalin’s Eagles” by Hans D. Seidl, shows the scrollwork, although it is too blurry to tell exact what that scrollwork is. The ‘93’ could also be interpreted as possibly being white. ‘Stalin’s Eagles” also says this aircraft was also flown by Maj. M.P. Rents as well as Filatov.

“White 01”, a P-39N-BE, serial #42-9033, flown by Gregori Dolnikov of the 100th GIAP, Germany; May 1945. Dolnikov inherited this aircraft from Ivan Babak in Feb. 1945. Babak’s personal artwork, a white angel(?) armed with a sword, was over-painted. On April 18, 1945, the slogan “For Petya Guchyok” was applied to the right side. Then several days later Babak was killed and the dedication to him was added to the left side. Over the exhausts reads, “From the Schoolchildren of Manupol.” The plane has a blue spinner and a white top of the vertical stabilizer and rudder. Note: The markings look quite accurate to the profiles in the Osprey book, although in the actual photo it appears the text is written with a heavier line to the letters. Also, I read the right dedication as “For Petya Tuchka”, which doesn’t really matter, the letters match the photo. Two sets of the dedication to the schoolchildren are provided in slightly different shades of blue. Both sets become slightly pixilated as they fade to white, though I don’t know how you would prevent this, it is a limitation of the printing process.

“Yellow 95”, a P-400 (serial unknown) flown by an unknown unit of the Northern Fleet, probably circa 1941/42. It is in winter white camo over light blue. The upper intake appears to be replaced and was likely in RAF Ocean Grey, as that portion of the aircraft was typically in Ocean Grey on British camo’ed Airacobras.

“White RGA”, a P-39Q-15-BE, serial #44-2547, flown by Maj. Gregori Rechkalov of the 16th GIAP, Germany; May 1945. Rechkalov was unusual among Soviet pilots in that he used his initials on his aircraft in lieu of a bort number. His large scorecard is seen on the nose. The aircraft has a red spinner and a red top of the vertical stabilizer and rudder, above a white line. Note: other photos show additional kill markings, possibly later in the aircraft’s life.

“White 100”, a P-39N-BE, serial #42-9004, flown by Col. Aleksandr Pokryshkin of the 9th GIAP, Germany; spring 1945. Pokryshkin was one of the more famous Soviet aces, with a final score of 59 individual victories. He did not carry victory markings on his aircraft. The aircraft has a red spinner and a red top of the vertical stabilizer and rudder, above a white line.

P-39N/Q, serial unknown, flown by Maj. Vyacheslav Sirotin of the 17th IAP, Poland; late 1944. Sirotin had a large eagle motif that had to have been stunning! Other decals in other scales show the eagle with a blue background, but close examination of the one existing photo clearly shows several colors present. This version is an educated guess of how it may have actually looked. Sirotin finished the war with over 330 missions and 26 victories, all in P-39’s. The aircraft has a white spinner and a kill markings on the door, the upper 3 sides boxed in with a white line. The stars on the fuselage are red on a white circle. Note: Checking the close up photo of the eagle motif, other than the unknown color of the background (photo is in black and white), the decal matches the artwork excellently! 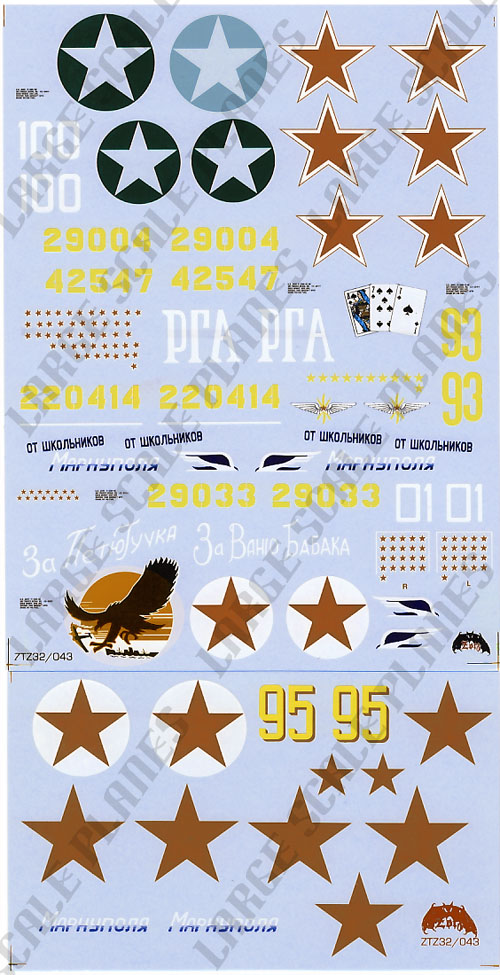 Other decals included are blank stars in a green circle and a blank star in a grey circle, provided to represent the painting out of the blue field of the US markings. The red stars are then to be placed over the blank area. Please note most photos are inconclusive as to whether the blue was actually painted over in green, or whether the red stars were simply painted over the white star of the US insignia, leaving the blue. Profiles in other references often show the field as being left in blue. It therefore is left up to the modeler to decide which way to go as, unless a distinctive photo is found, it is impossible to know which is correct.

These decals, as usual for Zotz, are in very good register, with the clear carrier film looking quite thin. The colors look good, the yellow looking very striking. The nose art is very well done, and stenciling clear and readable. The only caveat is on my copy there is a faint grey line going through the kills and ‘RGA’ of Rechkalov’s a/c, and one of the yellow 93’s of Filatov’s markings. It appears to be an error in the clear film. This is probably an anomaly but check your sheets!

Definitely a good and varied set of Soviet markings for the Special Hobby P-39 kits!!!