Parked in the back corner of Anzac Hall of the Australian War Memorial (A.W.M) is the S.E.5. It's unfortunate this plane isn't displayed more effectively. The lighting in Anzac Hall is very poor with the corner being the worst of all. When chatting to a volunteer staff member he explained that the AWM focuses on being a memorial rather than a museum as such. Initially disappointing from the modelers perspective but when one considers the brave souls who fought and died in these planes...well...you can understand the bias towards mood lighting. Quite appropriate.

It was this very kind volunteer staff member who allowed us (under supervision and with our assurances not to touch the aircraft) to get these close ups for modellers all over the world. It was especially amusing to see LSP Matty bolting over the wire whilst his mate from the US (Mike O'Leary) sought permission. I figured Mike had him already half-way there and getting the LSP membership some good walkaround intel was foremost on our mind. Ah yes...at the slightest semblance of a nod Matty was off and running.

So...a big thank you to the AWM staff volunteer who let us go over the wire. We think the trust was honoured and an opportunity to take some detailed shots of this truly unique exhibit was gained. All too often these days people say no to such opportunities because its the easiest default answer.

The AWM holds some truly unique and original artefacts that would amaze many a modeller. The staff do an excellent job of answering questions. Given Mike and I shared an arcane interest in even the smallest details on every object we found even an entire day wasn't enough to cover all parts of the memorials artefacts. Indeed, there is also an excellent research centre also located within the AWM. On one occasion I located gun camera footage on a shelf of Beaufighters strafing in the Bismark Sea...oooh did they lay some love downrange to the Jap invasion force. So if you're ever in the Aussie nations capital (that'd be...Canberra) stop by and plan a visit and then some to the AWM. Its a truly remarkable place with some super volunteers who help out and demonstrate a consistent commitment to those who have answered their nation's call. 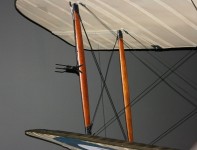