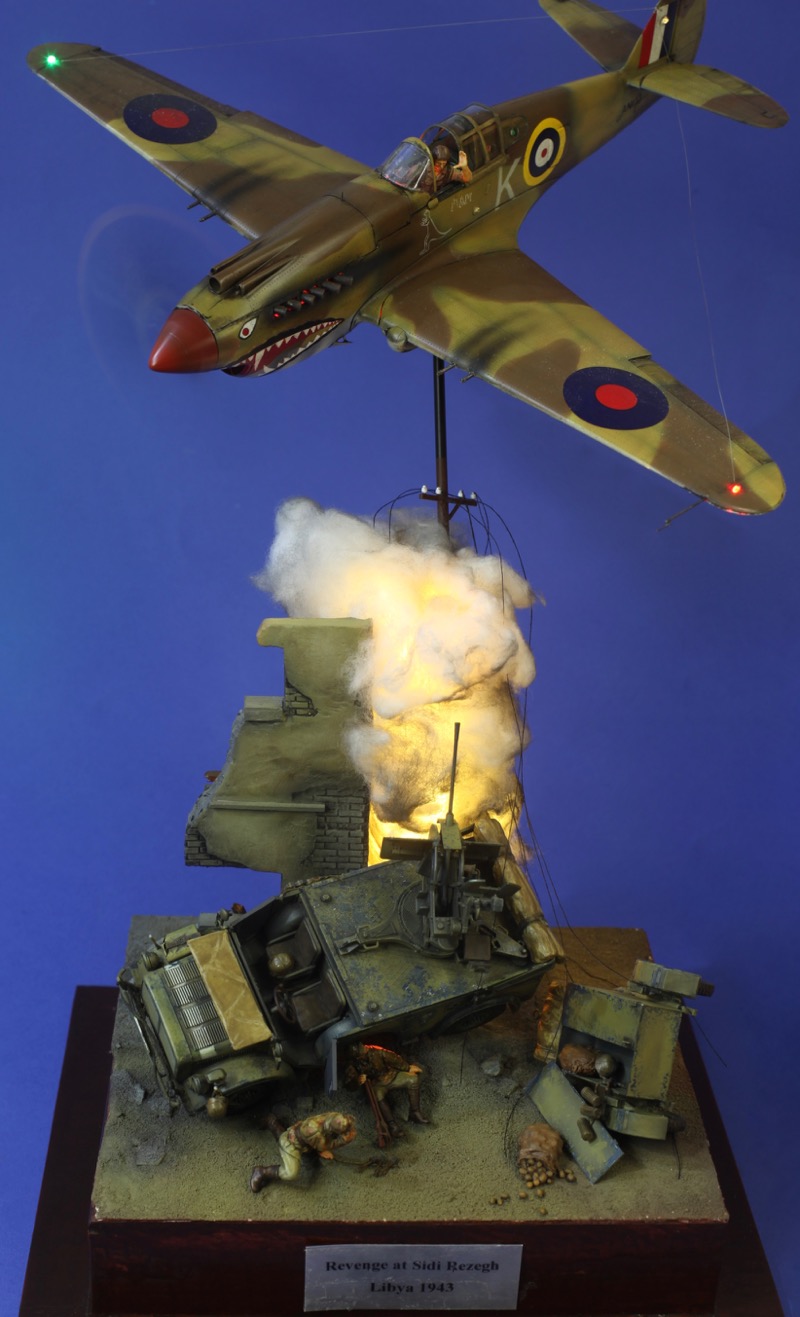 No. 112 Squadron was a squadron of the Royal Air Force. It served in both the First World War and Second World War and was active for three periods during the Cold War. It is nicknamed "The Shark Squadron", an allusion to the fact that it was the first unit from any Allied air force to use the famous "shark mouth" logo on Curtiss P-40s. Inspired by the unusually large air inlet on the P-40, the squadron copied the "shark's mouth" logo painted on some German Messerschmitt Bf 110s of Zerstörergeschwader 76 earlier in the war. (This practice was later followed by P-40 units in other parts of the world, including the Flying Tigers, American volunteers serving with the Chinese Air Force.)

In September 1941, Tomahawk MkII B in Sidi Haneish plane named Menace, pilot Flt Lt Neville "Bowks" Bowker, DFC, 89773, RAFVR, identified carrying the single code letter B, AN218 was destroyed in combat over Sidi Rezegh. At around the same time, AN413 coded GA-K flown by Jack Bartle and Neville Duke, was lost in December of 1941 over Libya. AN413 was coded 'K' and had 'Nan' in outline under the cockpit and forward of that a Kangaroo also in outline while with 112 Sqdn. The pilot Bartle was photographed without goggles and canopy in the open position. The Horch 1a was also photographed in Sidi Razegh in 1941. It was plausible therefore that all these elements could be in the same time at the same place.

I decided to use Trumpeter’s 1/32 P-40B. It is generally accurate but needed a few fixes. The cockpit received the most work as it is too shallow. This needs 8 mm of depth and so everything else follows from that (e.g. the seat back was extended by 8 mm using copper sheet). I incorporated a neodymium magnet into the fuselage to allow it to be stuck onto its support on the diorama. The build is featured elsewhere on LSP. The pictures should be fairly explanatory. The Allison engine was to be used in my Apache A-36 (seen elsewhere on this site), and so a new exhaust array needed to be made from brass tube soldered onto a brass bar. The British style pitot tube was soldered brass stock. The roundels were from the kit or spares file but everything else was hand-painted. The shark mouth is quite different from the AVG one but the family resemblance is intriguing. As this was going to be an interactive display, the plane had a motor, blinking signal lights, various landing lights, etc, all powered by LED with fibre optics. These are wired to a magnetic coupling into the underside. The coupling is a brass tube that carries the wires into the circuitry in the base. This is disguised as a powerline pole. The base houses a relay switch powered by a 9V battery, that activates a soundboard that plays a 15 second world war 2 soundclip about the “victories” of the Afrika Korps. This turns itself off after the clip. There are also wires that go to LED candle lights that activate the explosion and smoke effect. 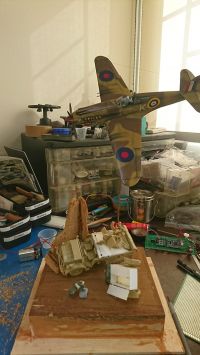 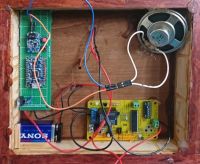 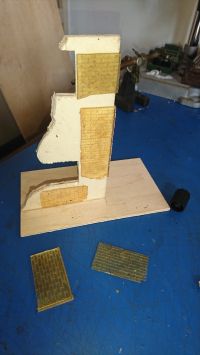 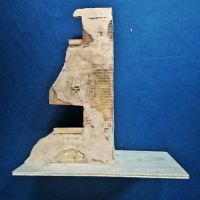 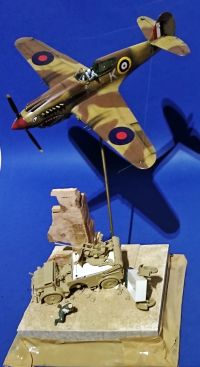 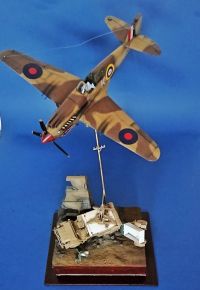 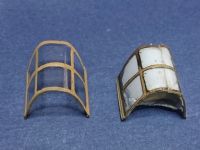 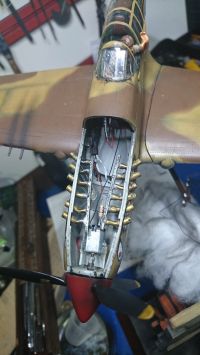 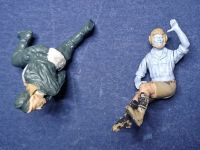 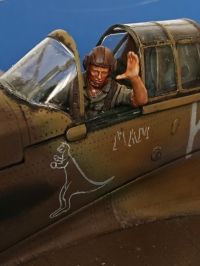 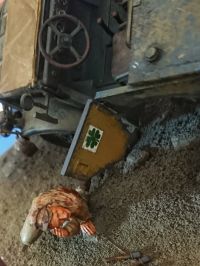 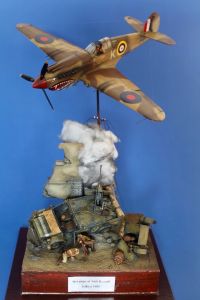 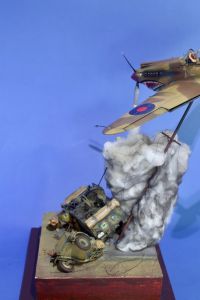 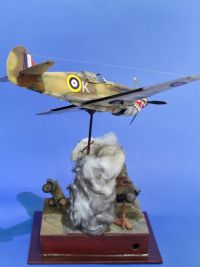 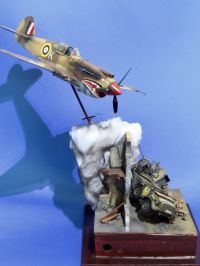 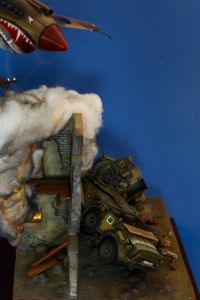 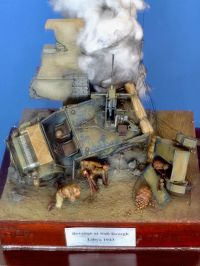 The other model was the 1/35 Tamiya Horch 1A with 20mm flak 38. This was modified to show the fairly famous mounted flak field design that was found in Sidi Razegh at about the same time.

The diorama base was made from scrap wood as was the building structure. The brick work were really old castings I made 20 years ago (really!). The smoke effect is cotton wool over wire mesh.

Originally there were to be 2 figures but there seemed to be a void in the centre of the diorama so I added a third figure later on in the construction. These were all made from spares in the box but the pilot is a modified 1/32 Airfix Multipose figure and the figures on the ground are 1/35 scale.

Some may quibble over the scale differences of the two vehicles but in a large sense this really works to create a forced perspective effect in a smaller footprint. The differences aren’t that obvious but I guess I too would not wish to put 2 different scale subjects in the same space or plane.

All unit markings were either home printed or hand-painted. I painted in enamels, varnished with Future-Tamiya Flat acrylic, weathered with turpenoids and drybrushed sparingly. I used oil washes for weathering and drop filters for color variation. The Kangaroo and NAN were hanpainted. The whole point of the Flying Tiger is the sharkmouth and I do feel that decals don’t do this enough justice. Also there is a unique feature of Sidi Haneish Sharkmouths, the black lips actually have furrows like a snarl, which I haven’t seen on commercial offerings. So I hand painted the design. This was sketched freehand on masking tape ad copied for the other side on tracing paper. The whole lot was airbrushed in place. The Horch was done in Panzer grey base-coat with salt and masking fluid masking for the pealing paint effect. All figures were painted in oil on acrylic.

This was an enjoyable diorama for its historical content and for the opportunity to experiment with electronics.