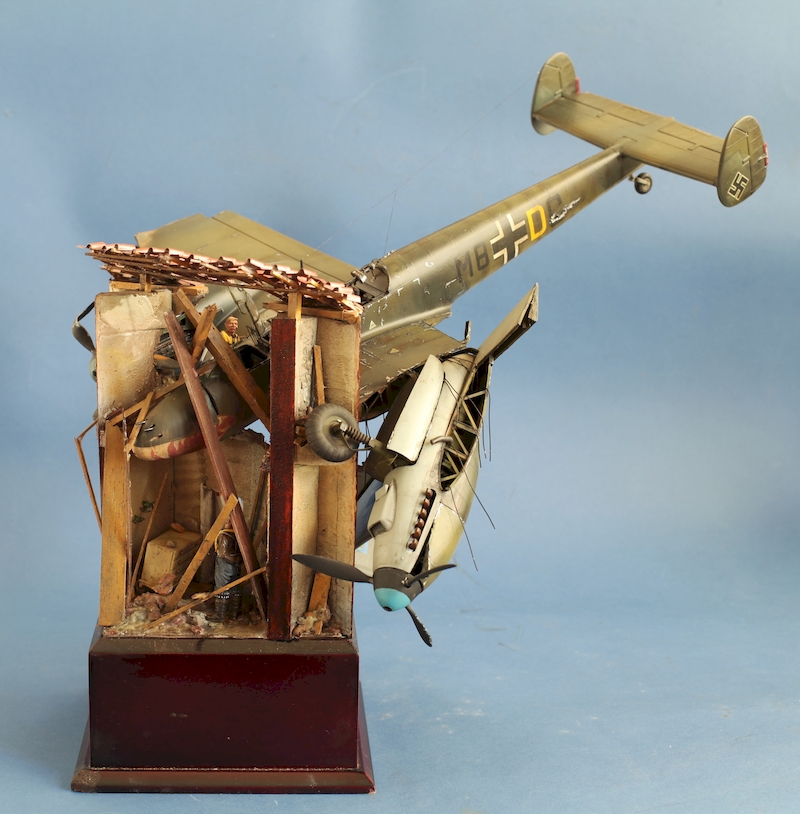 Continuing on the theme of the Battle of Britain my interest fell to the occurrence during the engagement where many German Aircraft fell out of the sky onto English soil. Much of this happened in the coastal city of Dover. On English soil it was tasked by the Home Guard to escort the downed enemy pilots to their regional detention areas. Naturally, these were the able-bodied older gentlemen of England. The diorama would be an opportunity to show off the interior detail for the plane in a unique way. Finally as an avid Shark Mouth collector I wanted to show the Shark mouths of Zerstörergeschwader 76 that reportedly inspired the Sharkmouths in the Tomahawks of North Africa.

I trawled the internet for airplane crashes in World War II. It became clear that planes that crashed were most often disintegrated and essentially a mess to model. Forced landings were however a little less chaotic and the planes retained some semblance of an airframe. Also, there are, by definition, well documented crashes and unless I could find the actual photo of a crash everything else would be a “reasonable occurrence”. I therefore settled on two photos. One a Dornier Do 17 crashed into a house and the other the M8DC of ZG76 that the Bf 110 C was based on. 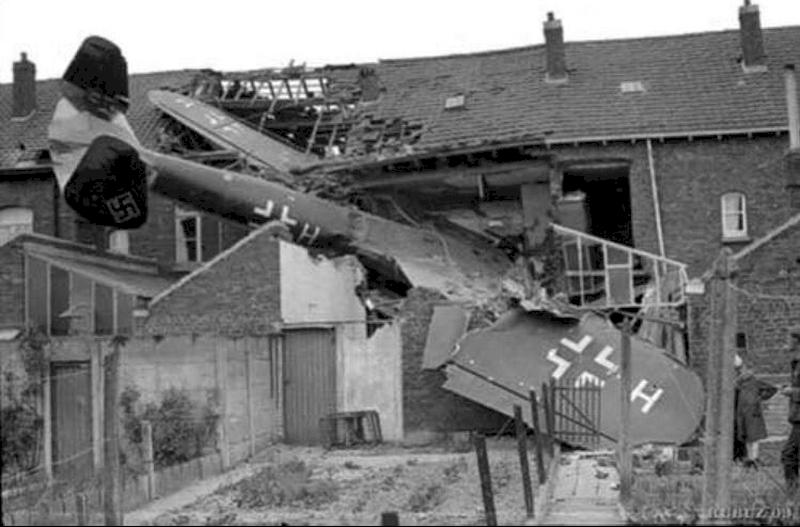 The base is a solid pre-fab base from High Planes Models. The structure is modelled after the house in the picture. It appears to be the backyard of an intermediate terrace house. This was cut from a block of expanded Styrofoam and carved out. The fittings were scratchbuilt and detailed with spares. The ducks are apparently characteristic of Dover homes and made by press moulding the pattern into plasticine and filling it with epoxy. The roof tiles are lead sheet pressed into a home-made jig in sections. Would scraps in sections with the plane in place effectively created a stand that would engage the model without glue. It was painted in acrylics. 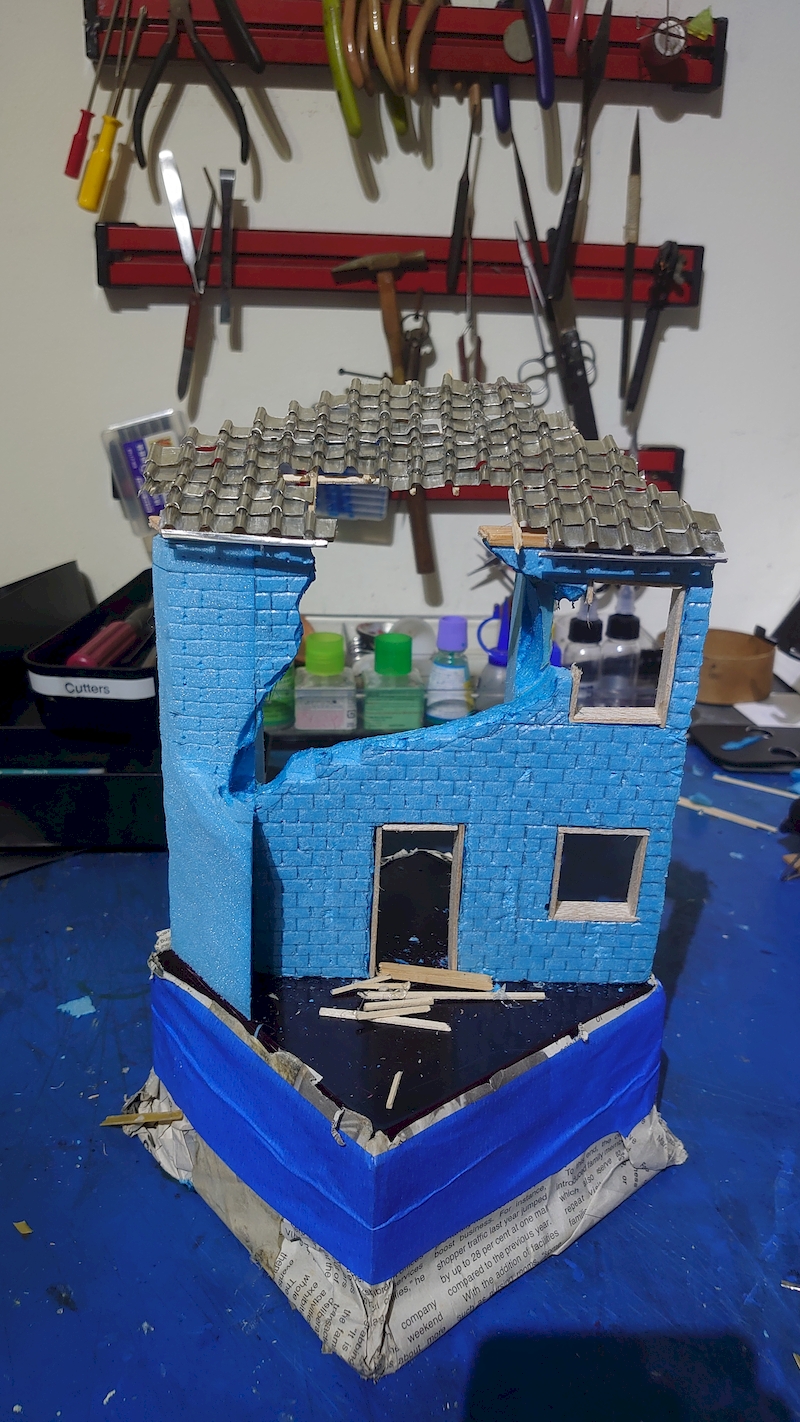 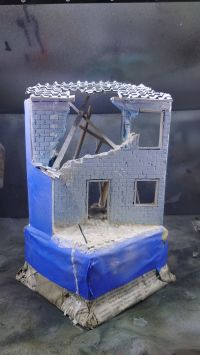 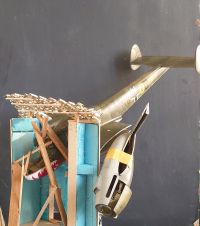 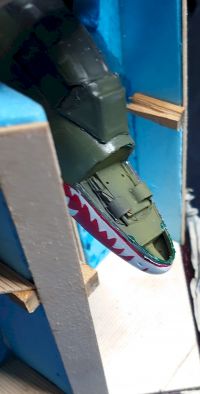 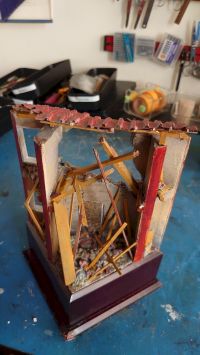 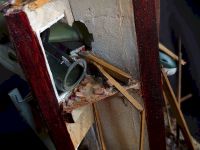 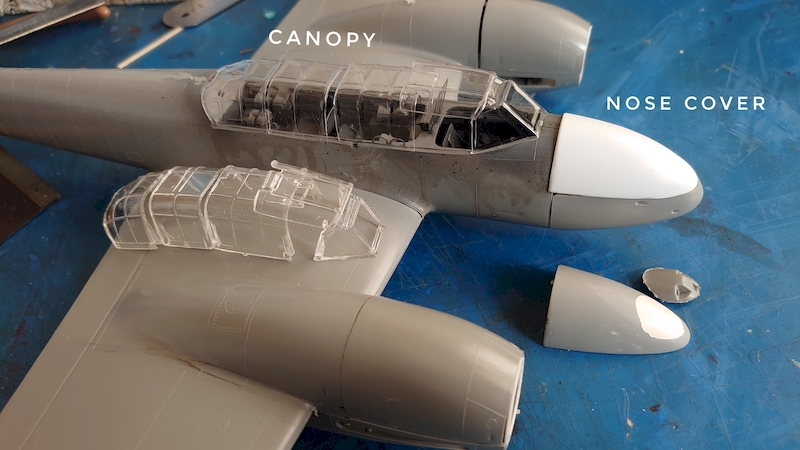 The old-tool 70’s era Revell Bf-110G is a reasonably accurately detailed kit externally. It does have raised panel lines which could have been scribed in place but frankly that would have been inaccurate. Most walkarounds do not show the rivetted panel lines to be recessed. Hence, I sanded down the panel lines instead relying on paint and weathering to accentuate the relief. The cockpit was super detailed with the Eduard upgrade kit. The layout is different between the G and C and the earlier model canon was drum fed. Also, the rear machine gun is a single Mg15 and the ammunition drums are fed on 2 rails. The drums were aluminum turned in a lathe. The canopy, while accurate was too thick and I vacuum formed a new one. Only the windscreen and 2 more sections would be needed in the final model as they were jettisoned in the crash. I made the rest anyway as cockpit masks during painting. The external details came from the Eduard kit exterior detail kit. In addition, the aft nose section was vacuum formed from the kit master. Machine guns were brass pipes bent to shape. I did actually detail the nose gun bay but opted to close it in the end.

After assembly and painting and initial weathering (see pictures) the model was cut along panel lines as shown. Battle damage was sparingly replicated – the real ones were often riddled with holes, but this looks quite unusual in scale models (I think). Multiple bullet holes on the fuselage were created using a motor tool and painted in multiple shades of aluminum. Cannon hits were replicated with drill holes, epoxy putty and pastels for the char of cannon fire. The starboard propeller blades were heat bent. Similarly, I used a heat gun on the wing where it would have collided and formed wrinkles. This had the unexpected and pleasant effect of causing realistic paint deformation. The starboard engine is a Verlinden DB601 left over from an earlier Bf 109 project. The propeller hub was drilled to depict a C nose cone. 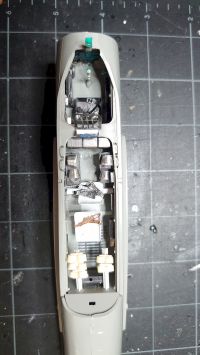 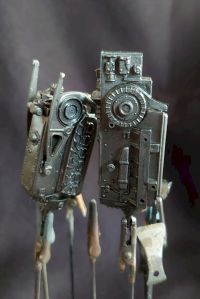 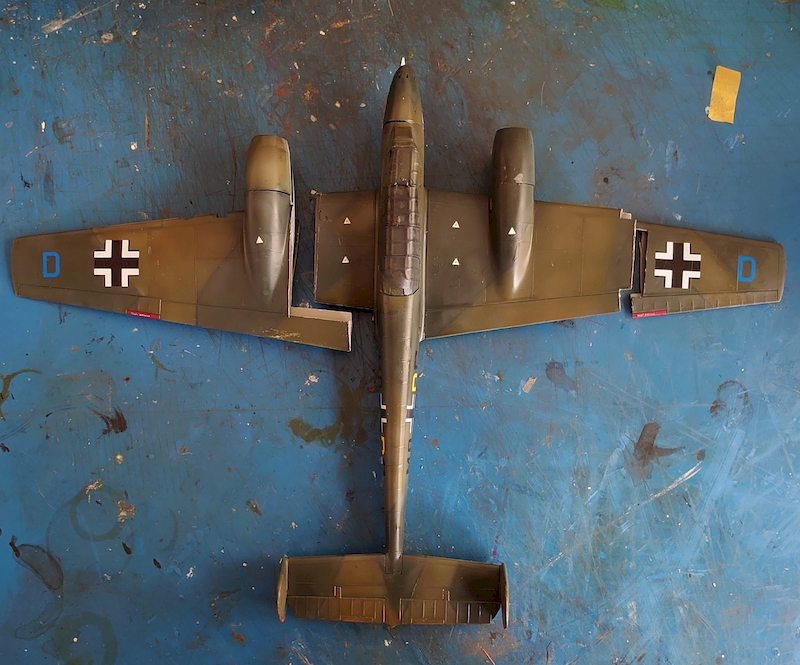 The models were base painted in Humbrol enamels, varnished with Future-Tamiya Flat acrylic, weathered with oils and turpenoids and chipped sparingly. I used oil washes for weathering and drop filters for colour variation. The worn silver was a combination of sponge dabbing, silver pencil and undercoat with black and brush painting silver. All markings were a best-guess paint job based on the few photos available. I used RLM colours from Humbrol which look very authentic with the right sheen. Markings were a combination of hand-painted markings, home prints and old decals from the spares box. The decals from the kit were not usable. 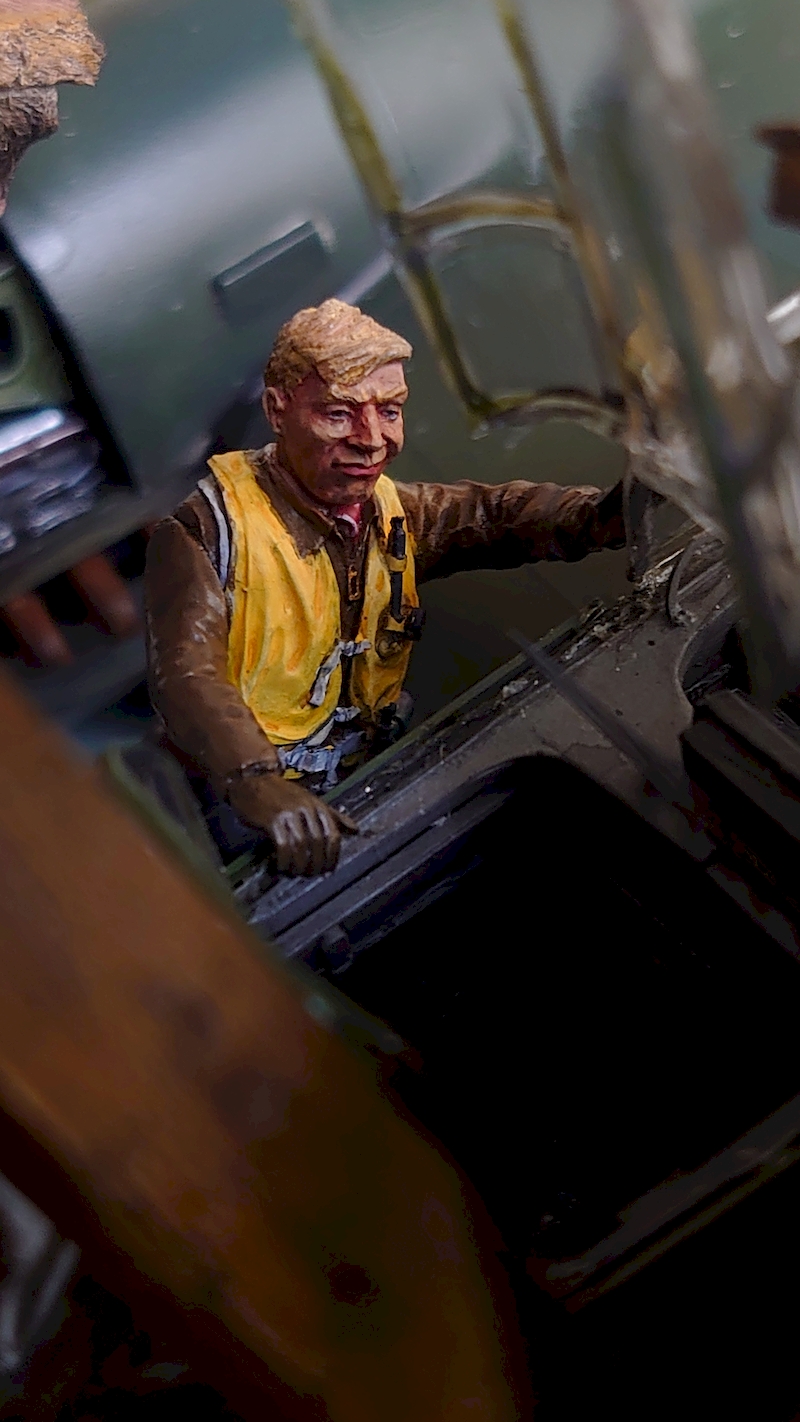 The Luftwaffe pilots were from Aires and the Civilian figures were modified from the MasterBox Western Civilian set. All figures were painted in Acrylic. 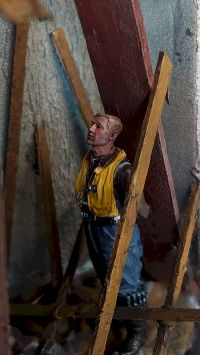 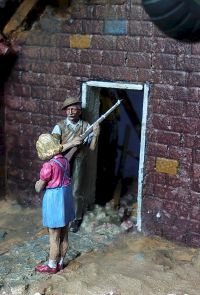 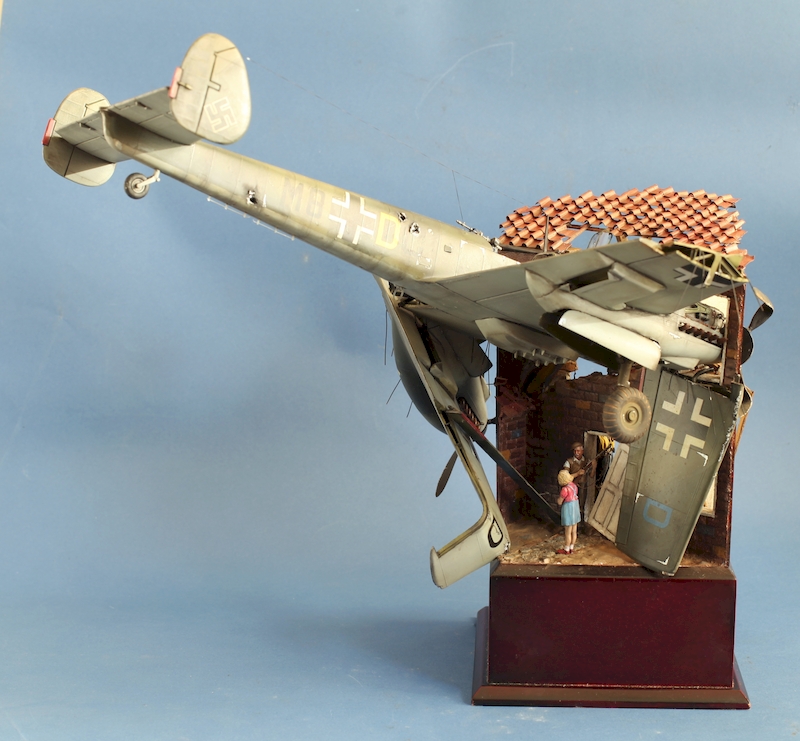 This diorama documents an important chapter in World War 2, that of Civilian involvement in Britain. It is an area that is not commonly depicted in Dioramas. I am glad to have one in my collection. 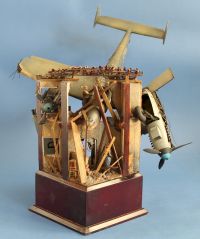 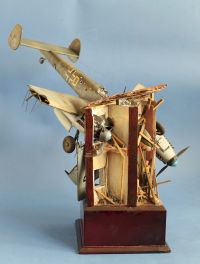 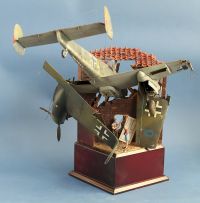 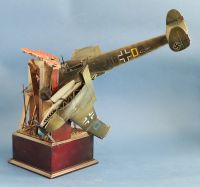 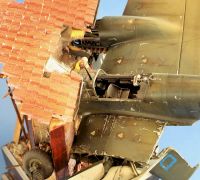 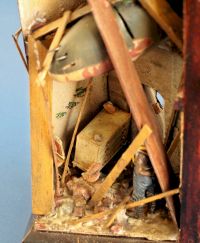 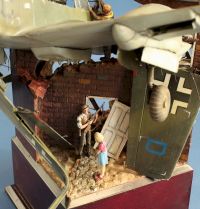 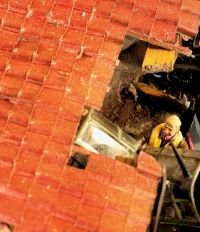 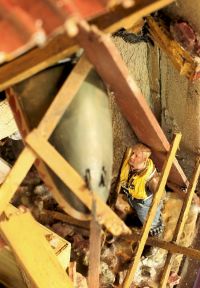 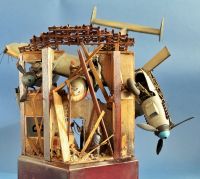 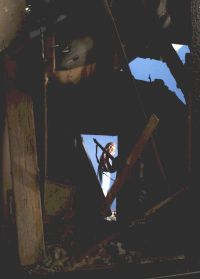