When we last saw our intrepid modeler, he was pondering over the finer points of painting model airplanes.

Unfortunately, I didn't inherit my Uncle Chuy's painting experience (he worked in a lowrider shop in L.A.), so I had to practice. This actually went pretty well. A trip was made to Wally World to buy a few bottles of sacrificial paint, and these were used on numerous pieces of cardboard, wood and my son's bike (no, I can't do flames, either).

It was now time to do some painting. The model got a quick wipe down to get the dust off. I decided to shoot the yellow tail and nose first. Thinking I could get the spray narrow enough to freehand both areas, I didn't bother to mask anything off. Some Model Master Insignia Yellow would do the job here. Got it mixed up, stuck the bottle on the gun and started spraying.

What I ended up with was a beautiful yellow tail and yellow paint spatter all over the Jug, me, the dog and anything else that happened to be in the immediate vicinity. Remember the colorful metaphors from the last article? I invented some new ones. After I wiped the worst of it off, it looked like this: 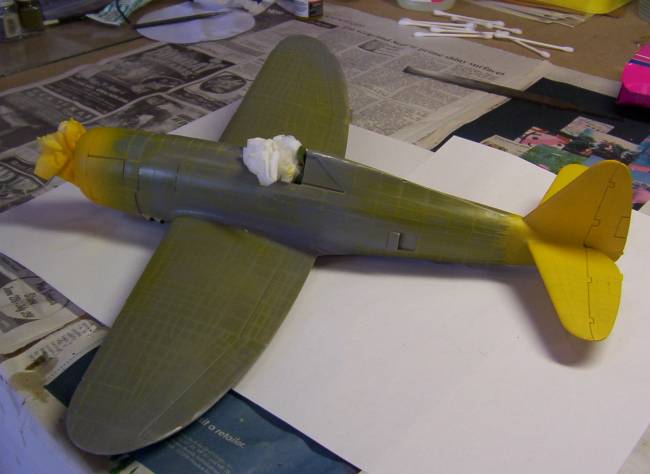 I wiped the model down as best I could, and after the yellow dried, I masked off the nose for the red paint that would go there. Model Master Insignia Red did the job here. This time, I masked off the airplane. I reduced the amount of thinner in the paint just a little, and played with the air. Some more practice (the dog now has red spots to go with the yellow ones), and then off to do the real thing. And it spattered again! When I picked the model up to turn it to shoot the left side, the tape on left wing stuck to the workbench, pulled the paper off, and I ended up with this: 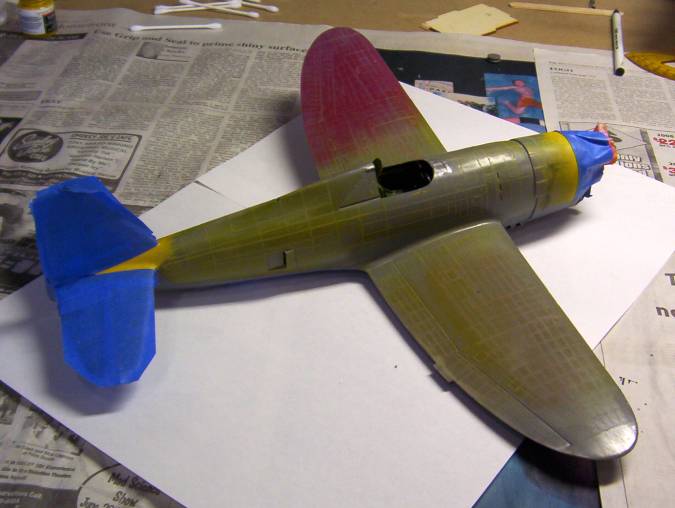 This, of course, is the red scheme of a P-47D of the El Gaumanian Air Force as flown in the Water Polo War of '67. Documentation? Uhhhhh...

Needless to say, I was a little nervous about shooting the gray lower surfaces. I spent a long time masking off the top of the airplane to keep any more spatter to a minimum. A post to LSP provided some possible answers to my airbrush problems. Then I had a major flash of inspiration---read the directions!! What a concept!! Except that they were nowhere to be found. A visit to the Badger website provided the information I was looking for: "Suitable for ages 8 and up." No, not that one, the one that said, "Works well with medium viscosity paint." I poured Model Master Neutral Gray into the brush bottle, then thinned it with just a few drops of lacquer thinner. I bumped the air pressure up just a bit to compensate, and...no spatter!! What I did get was a pebbly texture that looked a lot like orange peel, but that smoothed as the paint dried. 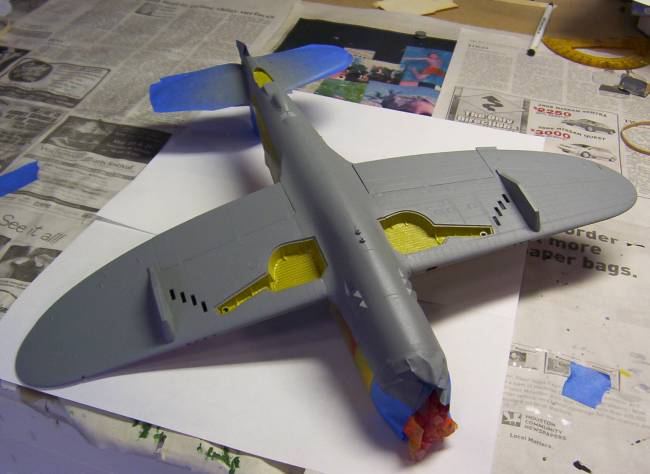 The gray still had an odd look to it when it dried. I suspect that that was due to the humidity in the air when I was spraying. Since the airbrush is external mix, there's really no way of controlling that (besides moving back to the desert where I belong...). My shop (also known as the garage to the rest of the family) is climate controlled, though---the climate outside controls the climate inside.

I let the gray dry overnight, then masked the airplane off to shoot the OD uppers. I used 3M blue painter's tape for this. Both the compressor and the water trap were drained to make sure I wasn't getting water from there, and then I mixed the OD as I had the gray, but with just a bit more thinner. Same result, no spatter, but I still had the pebbly texture while the paint was wet. When it dried, though, the finish looked like an olive drab that had been in the weather for a while. You can't see it in the pics, but it's there. I think the gun is still picking up humidity from the air in the garage. 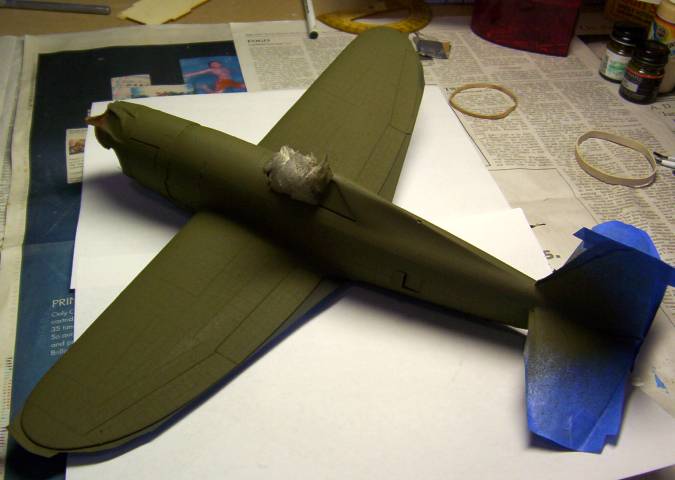 Then the tape started coming off: 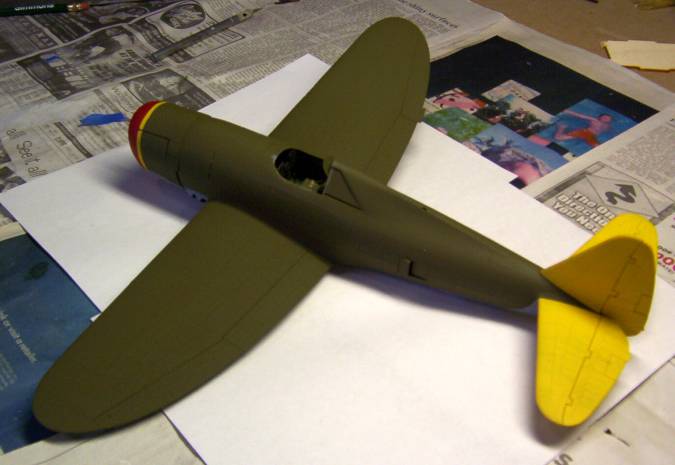 A little touchup, and then I couldn't resist sticking the prop and windscreen on. She's starting to look like an airplane now. My wife caught me flying it around the garage, shooting up imaginary trains... 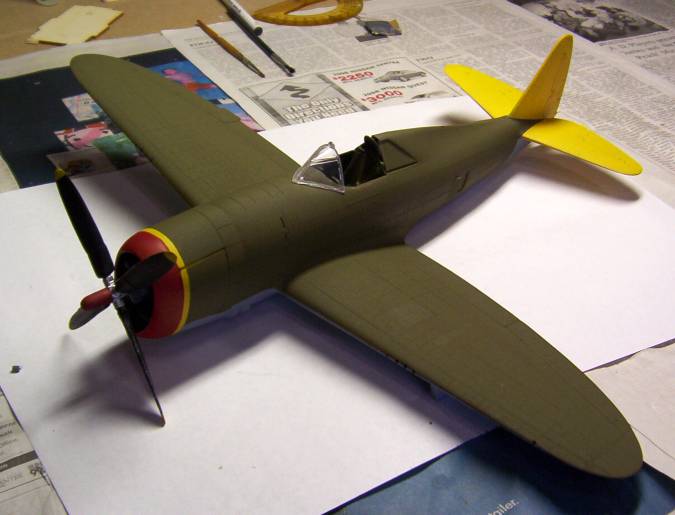 My modeling time is now about to be cut short by my having to go back to work (a minor annoyance!). Next time, we'll see if it's possible for an old guy to use them newfangled decals.......