When we last saw our hero, he and his faithful red and yellow spotted sidekick, Big Dog, were getting ready to do combat with the evil Model Droids, who were trying to flood the world with inferior cheap resin kits of obscure El Guamanian flying machines…

Decaling has always been my favorite part of building models. This is when your plain Jane , olive drab airplane starts to take on her identity and personality; the stuff that sets her apart from all her sisters. The scheme I chose was for Col. Robert Baseler’s airplane, “Big Stud”, of the 325th FG, the “Checkertails”. The tail checks were from Superscale sheet # 3214, and the rest of the markings were taken from Microscale sheet # 32-24.

Not having done this in quite a while, I have to admit I was a little antsy. I did the lower stab checks first, since one of the airplanes on the sheet did not have checks there, and if I screwed up, there was still a chance of salvaging the markings. But the tail markings went on with no problems at all, snuggled down well with a little Solvaset, AND lined up perfectly with one another. Am I good, or what!? 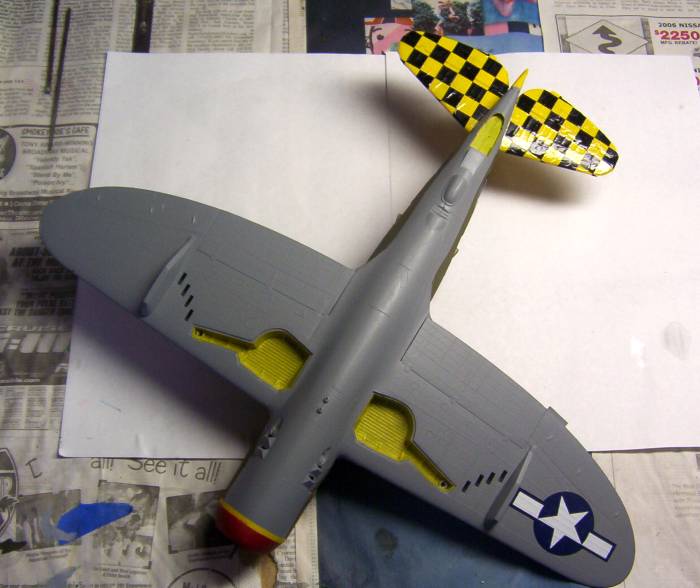 Things sort of went downhill from there. Getting cocky can be a bad thing…..The national markings went on next, and all was well until I got to the left fuselage stars and bars, which tore as I was sliding them off the sheet. Panic? Me? Darn straight I did!! Lots of water and patience got all the pieces back together and in place, which was a fine thing, since I didn’t have any spares. Two of the “8’s” in the buzz numbers did the same thing, but I was a pro by now and I managed to salvage them as well. Practice DOES make perfect. Well, sort of… Everything else went on with no problems. Then I realized I hadn’t glosscoated the model before putting the decals on!! Doh! Live and learn. They look ok, though, and I’m happy with them. A few light shots of Dullcoat completed the decal work. 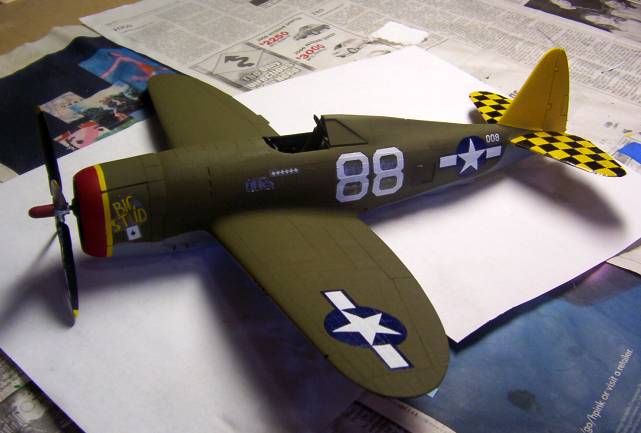 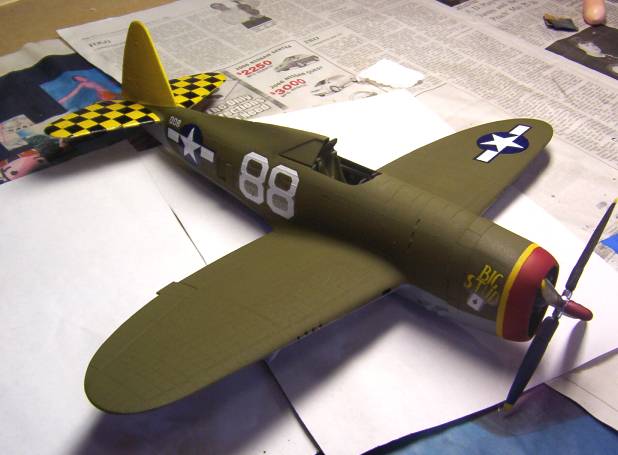 I did a little light weathering in the high wear areas, drybrushing some zinc chromate or silver in high wear areas. A dark gray wash filled in all the control surface gaps and the areas around the cowl, while the wheel wells got the gray mixed with a little dark brown.

It was about now that I had one of those great modeling days. The wheels from Rutman arrived, as did an order from Squadron with some goodies in it. Then, the next day, a care package arrived from Darin with a 1/32 Revell Corsair and a “few” other models in it. And I found my old model junk box in the attic! Needless to say, this got me pretty pumped to get the Jug finished.

It was time to start putting things together. Landing gear was assembled and painted, as was the drop tank. Wing guns were made from 1/16” tubing and glued into place. A set of Monogram P-61 turret guns provided a good excuse for the missing pitot tube, and some unidentified kit from a galaxy far, far away donated the radio mast and gunsight. I tried three times to mask the canopy, the second time I actually got the tape all cut away, only to realize I had left the frames taped and the glass uncovered. Yes, I was paying attention. Really. I finally bit the bullet and freehand painted the frames, first with interior green, then with olive drab. That came out ok, too, but I think I’ll hire somebody to do that next time…

Home stretch!! Gear, canopy and drop tank went on, followed by the tailwheel and all the gear doors. I let her dry upside down overnight and then…….she was FINISHED!!! 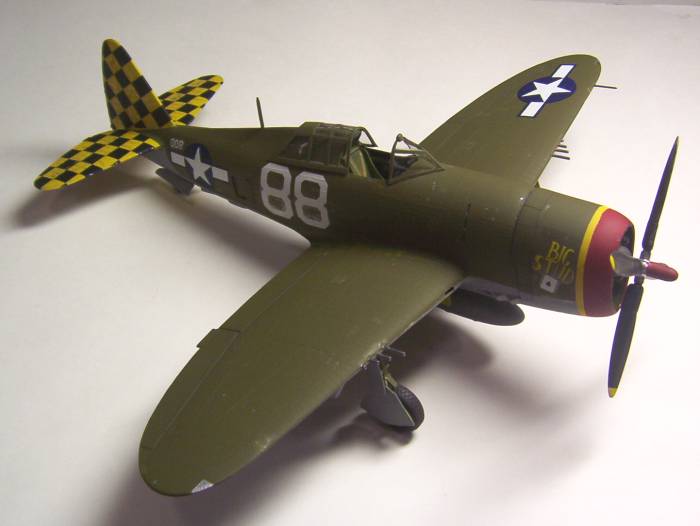 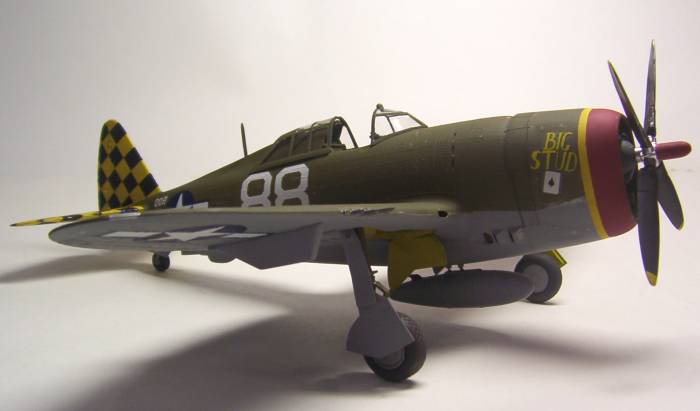 I can’t describe how good it felt. She won’t win any contests, but she looks like a P-47, and has the “shelf presence” that that airplane should have. I could probably do a little more detailing, but she’s been waiting to see daylight for close to 25 years, so I’ll just leave her be. She earned it. 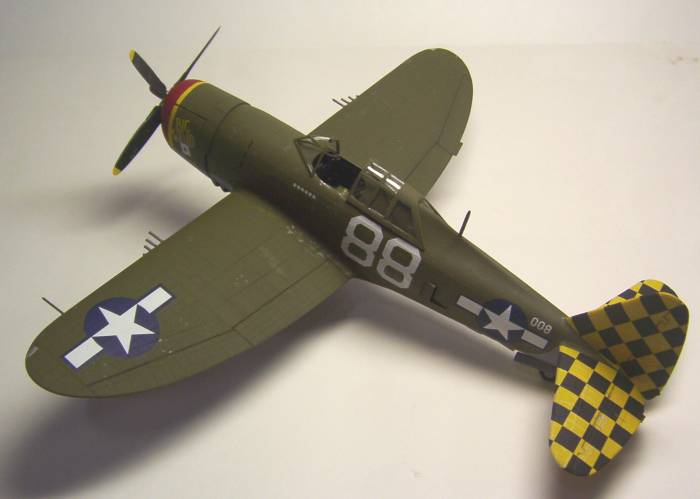 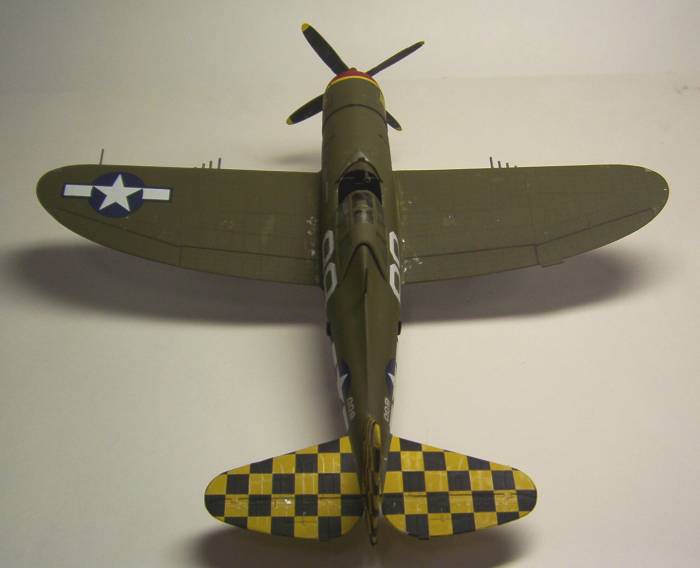 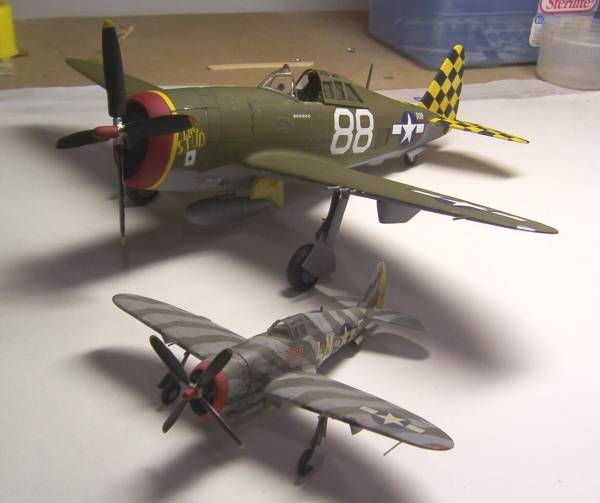 This project probably would not have happened without the help of a good friend and some great people from LSP. Larry Hawkins donated the missing control stick and the stars and bars. LSP’s resident Jug expert, Chris Sherland, was kind enough to send the rest of the decals and answered countless inane questions. And Darin Bellis, whose prodding and patient advice got me back into the hobby and also got me through a lot of the snags I ran into. Thanks to all of you! I'm already scheming the next project. So many airplanes, so little time…