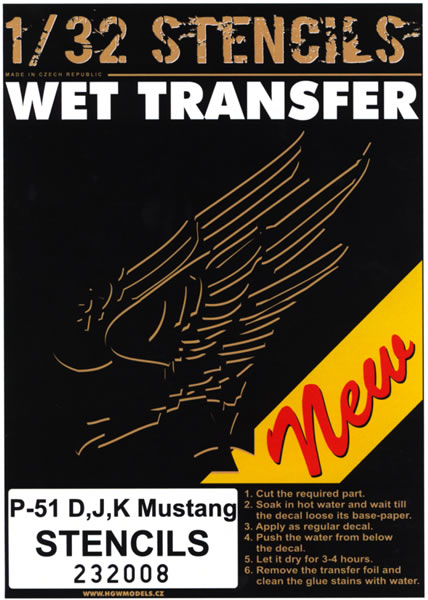 Czech firm HGW has developed a new approach to decal application that it has dubbed "wet transfer". This unique approach is a conceptual hybrid of traditional waterslide decal technology and the less-used dry transfer products. Essentially, these are waterslide decals whose carrier film is over the printed design, and is removed once the decal has dried on the model. This gives a result similar to that achieved by dry transfers, as there is no visible carrier film left on the model. Theoretically this gives the modeller the best of both worlds: the ease of application afforded by waterslide transfers, combined with the superior painted-on look of dry transfers.

Until recently, HGW's releases using this technology have been limited to rivet sets, but they have now expanded into stencils and markings. Here we examine their set of stencils for P-51 D, J & K Mustangs. 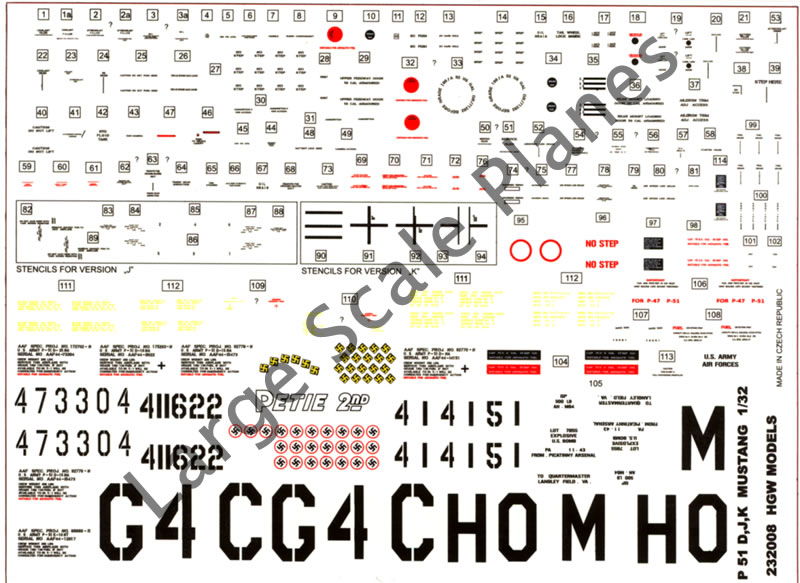 As you can see from the image above, this sheet provides an extensive set of stencils, not only for the main airframe, but also for ordnance and landing gear too. As an added bonus, markings for several specific Mustangs are also included:

There's also a set of 24 victory markings for a Mustang whose identity eludes me, but I'm sure experts will recognise it. Bear in mind that none of these aircraft-specific markings are complete, and will in every case need to be combined with markings from other sources. Nevertheless, they're a handy addition should you be building any of these aircraft.

The decals themselves are quite glossy, as is the sheet they're printed on. Registration and colour density appear to be excellent. Print resolution is also very good, as evidenced by the enlarged data stencil below:

The slight fuzziness evident in the scan is an artefact of the scanning process, and not visible to the naked eye. The image shown is around 16x actual size.

As you'd expect with a product such as this, a comprehensive placement guide is included: 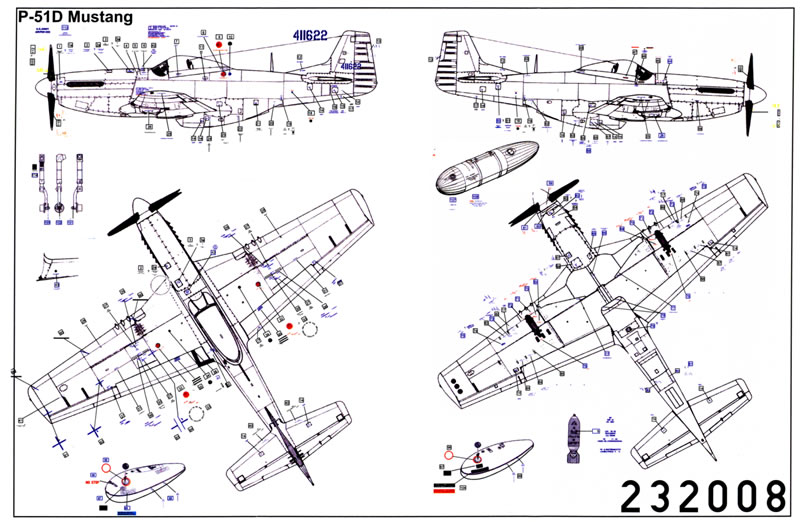 Not every stencil will be applicable to every airframe, but a full application for a given Mustang will still take some serious time. This is, however, no different to the requirements for a full set of waterslide stencils. The caveat of course is that the "wet transfer" process requires all the carrier film to be removed in a subsequent step, which itself will be quite an undertaking if you've used all applicable stencils.

To see the "wet transfer" approach in action, see my review of the HGW Silver 1/32 Rivets set.

Natural metal Mustangs with colourful trimmings are among modeldom's most popular subjects, and stencil application can make or break such a build. This set promises to solve the inherent pitfalls in that combination, and provided the "wet transfer" process lives up to its promise, this will be an absolute must-have set for any 1/32 Mustang build. Highly recommended!