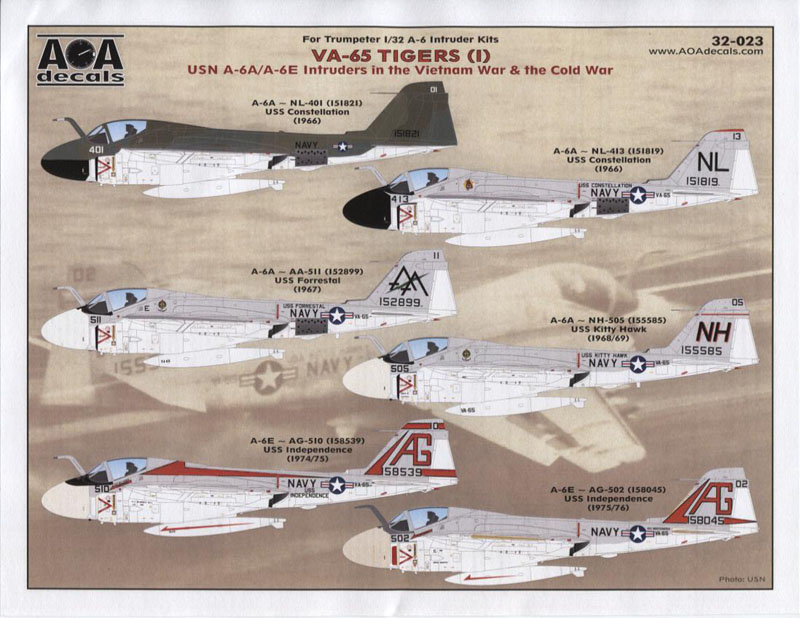 A new release by AOA Decals is dedicated to the Grumman A-6 Intruder, specifically, in this case, the A-6A and A-6E models of Navy Attack squadron VA-65 (Tigers). The Intruder, certainly a well known attack aircraft, here receives an expansive set of decals that represent several Intruders that served during the Vietnam & Cold war eras, and I would think should be well received by the many, many Intruder fans out there. 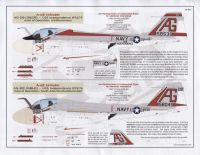 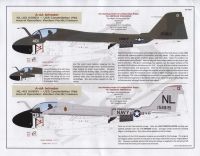 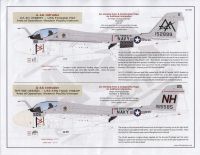 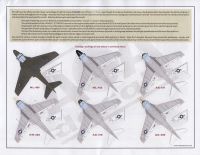 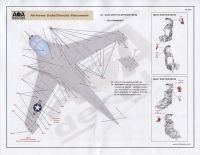 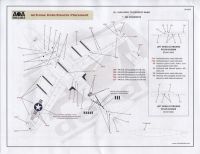 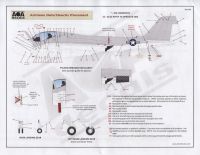 This set includes markings for 6 aircraft. Full stencil decals here are included (unlike set 32-024), and appear to be quite comprehensive.

As stated above, no less than 6 different air-frames are depicted on this set, and all depicting one particular VA (Navy Attack) squadron, and are either A-6A or A-6E aircraft, those being (in no particular order):

The Meat Of The Set 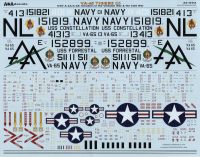 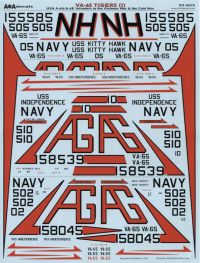 The decals are printed by Cartograf of Italy, so have their historically typical very high quality (perhaps the best there are), with excellent registration, opacity and vivid colors. Two complete and rather large sheets are provided, comprising national insignia (4 positions), carrier names, unique aircraft art, as well as intake warning markings, and various smaller bits. The main sheets, are really a sight to behold, being very busy, with all manner of interesting squadron insignia, etc. All aircraft are to be painted in various combinations of colors, dependent on the individual aircraft, to include standard Light Gull Gray (FS36440) and Gloss White (FS17925), as well as one dark green/medium green/olive drab over FS17925 (white) air-frame. (No FS equivalents specified for the other three colors on this particular (NL-401) machine), so nothing really all that unusual there. Radome covers range from the greens through black, white, and the creme color frequently also seen. Notes are thoughtfully provided that point out unique features of each machine/time-frame, and seem to quite comprehensibly address all pertinent visual differences.

Small stencil decals are also provided for both ejection seats, something I see as a very nice touch, as the seats are really quite prominent in the open canopy position.

Note: The decals have obviously been designed specifically for the Trumpeter A-6 kit, the only serious game in town, really, and are specified as such. 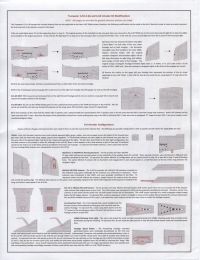 One full size (8-1/2" x 11") sheet is also provided here, offering up suggestions for correcting/modifying certain features of the standard kit(s), to reflect the realities of the specific aircraft.

In summation, I see these as a very worthwhile and impressive effort from the folks at AOA, and seems consistent with the overall quality and research that they have come to be known for. I've already now added a Trumpeter A-6 kit to my "wants list", based upon my receipt of this set, as well as 32-024, a review of which, will shortly follow this one.