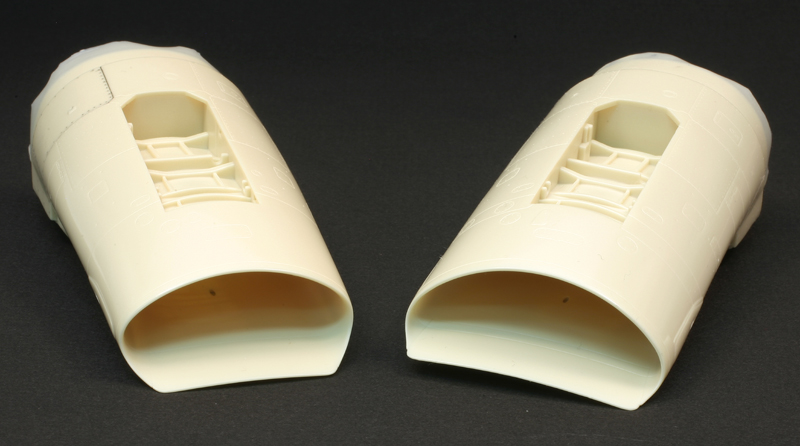 Zactomodels has recently released the MCID, better known as ‘big-mouth,’ intake correction set for the Academy F-16 kits. It joins their previously issued NSI ‘small-mouth’ intake. I will take a look at both intakes as they are so similar. 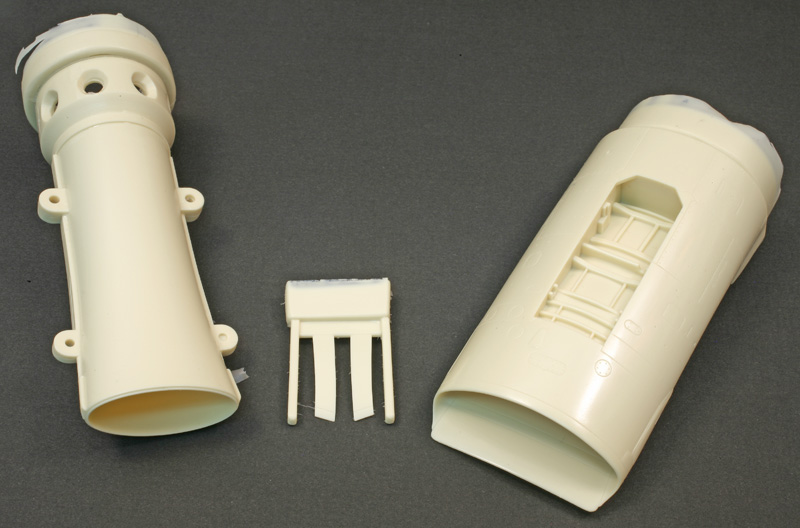 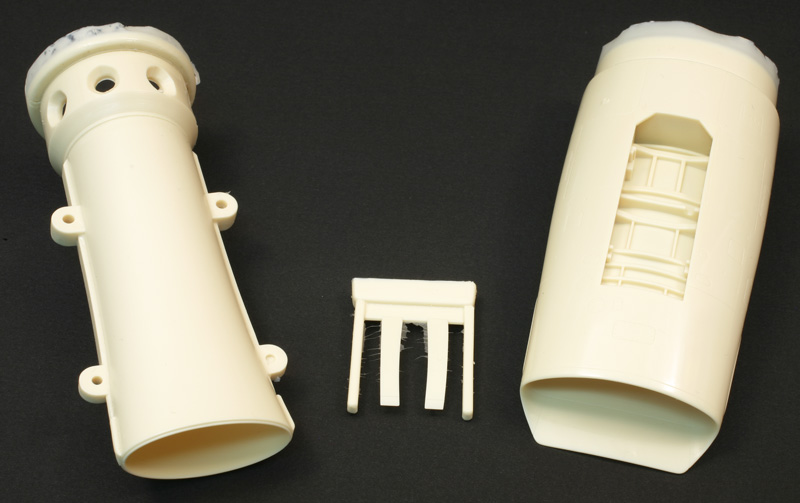 Both conversion sets include four pieces. The intake, the ducting from the intake to the engine face, and two small strakes that go on each side of the triangular fairing between the intake and the fuselage. Sharp eyes will note the small-mouth intake set has strakes with vertical forward faces, and the large-mouth set has the correct forward-slanted strakes.

Surface detail is excellent, matching the style of the Academy kits. There are small differences between the small-mouth and large mouth details, just as there should be. I have darkened the panel lines and detail with pencil lead so to better show them off.

Just as an afterthought, here are a couple pictures of the Zactomodels intake versus the long out-of-production Cutting Edge intake. The shape is very close, but is made to fit the old Hasegawa kit and would not fit the Academy kit without a ton of work – if you could find one.

The correction set is a major upgrade for the Academy kit. It has a larger space between the intake and fuselage, and more of a curve to the upper lip. It also has the subtle swoop from the intake to the ducting, as opposed to the flatter nature of the Academy kit. It gives the model a much more accurate look. 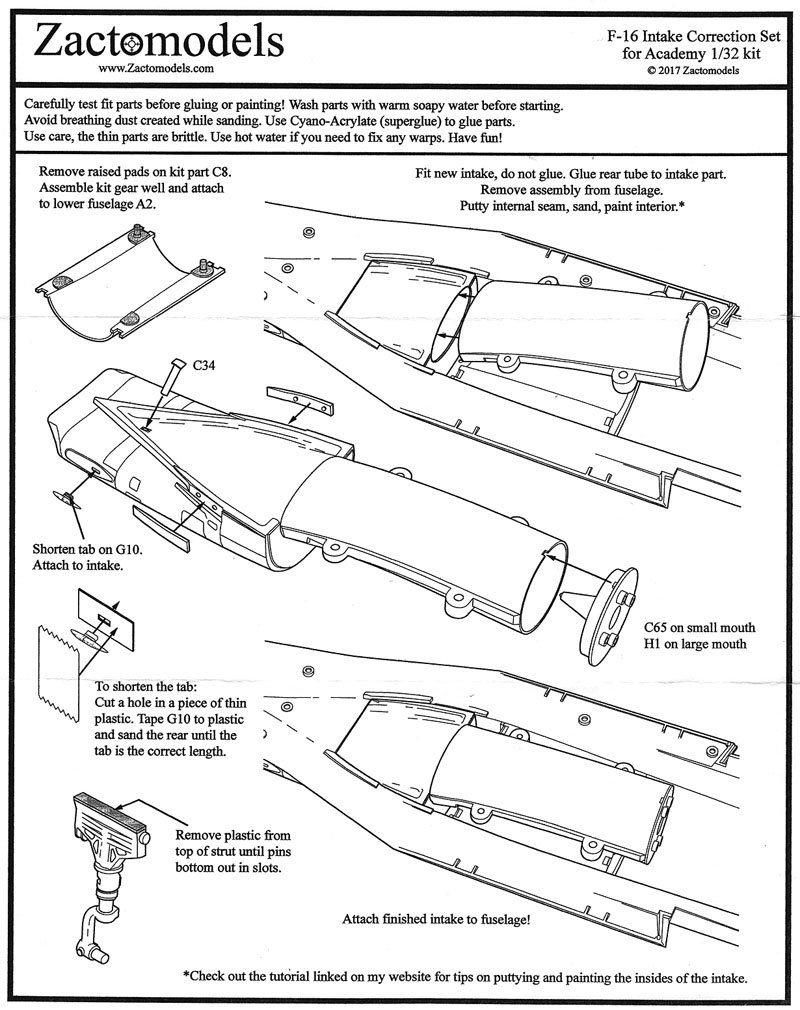 Instructions consist of a one-sided 8-1/2" X 11" paper. They are clear and concise. Zactomodels also has a tutorial on smoothing and painting the intake on their website.

Construction notes with the Small-mouth intake

I have gone ahead and done most of the work to install one of the intakes to verify how well it fits. Unfortunately, I only have the Sufa kit, which requires the small-mouth intake, which has already been reviewed here. But both sets are essentially the same except for the size of the intake so if one works, so should the other. 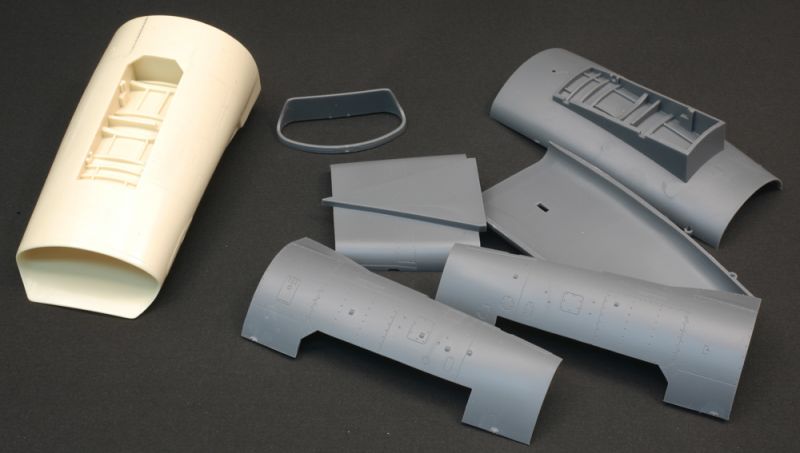 This picture shows the other reason for buying this conversion! The Academy kit requires six parts to re-create what Zactomodels does in one, with all the additional seams as well. I only wish they would produce sets for the Tamiya kits as well to save all the time that will be spent on those seams – even though the Tamiya kit intakes are quite accurate. 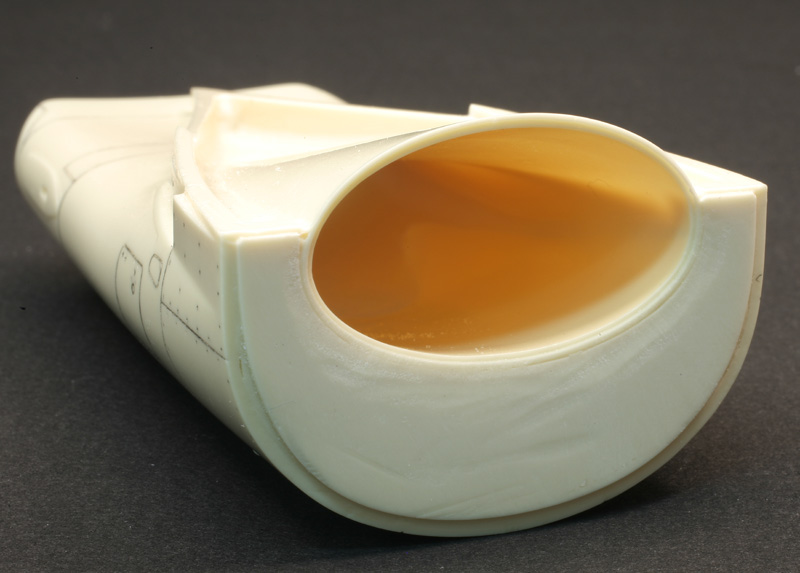 Cutting off the pour blocks was easy. The block on the ductwork was thin and took only a few swipes with a razor saw to remove. The block on the intake was thicker but Zactomodels gives a notch to guide you by and with a sharp saw I was through it in no time at all. I cut in a pan with some water in it, dipping the saw in it to reduce the dust. Once you have the majority off, sand and scrape, again wetting to reduce dust, until only the slight notch is left. 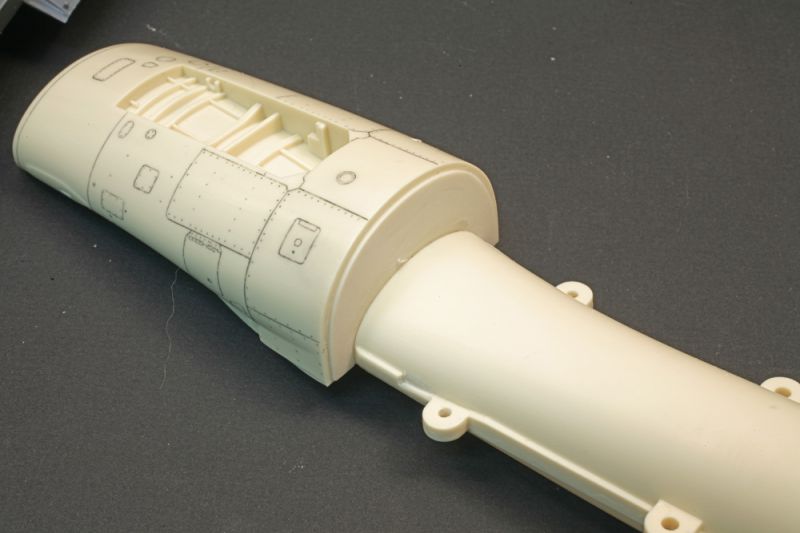 With the intake prepared, the ductwork fits perfectly.

With the gear wells in place, the intake and duct can be installed. Zactomodels suggests removing the pads and pins from the top of the wheel wells to fit the intake. This is primarily to make it easy to place the intakes already assembled – Academy would have you add the ductwork after the wells and intake were already in place. I found also it helped to ease or chamfer the forward corners of the wells to allow a little more room for the duct. Nothing major, just a small bit of sanding. 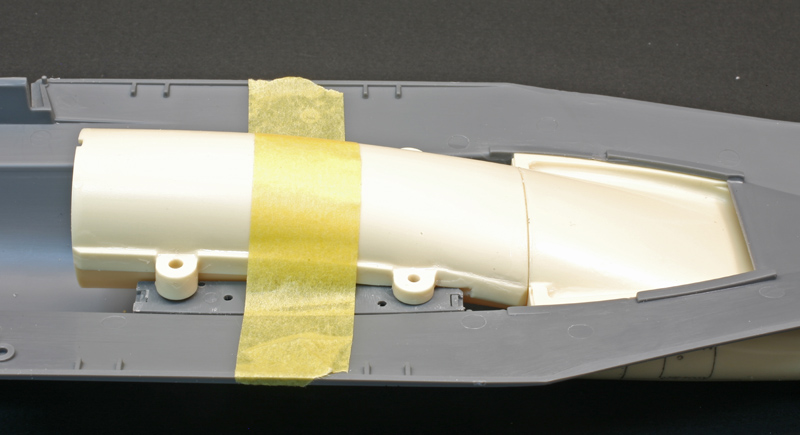 The fit is near perfect. In the picture, all that is holding the assembly together is the one piece of tape. The panel lines match up near perfectly with the Academy kit.

The wheel well detail is exactly the same as the Academy kit. Note one could add quite a bit of detail if one wished!

Note the comparison photos between the Zacto and Academy small-mouth intake. The Zactomodels version looks much more accurate.

The Zactomodels F-16 intakes, both small-mouth and large-mouth, are extremely well done, and will greatly improve the look of the Academy F-16, as well as save a lot of time in seam work. Also, on the Zactomodels website, there is a page giving tips on painting the inside of the intake and duct. See also this earlier review of the Zactomodels Small-mouthed intake for a second opinion.

Thanks to Zactomodels for the review sample.