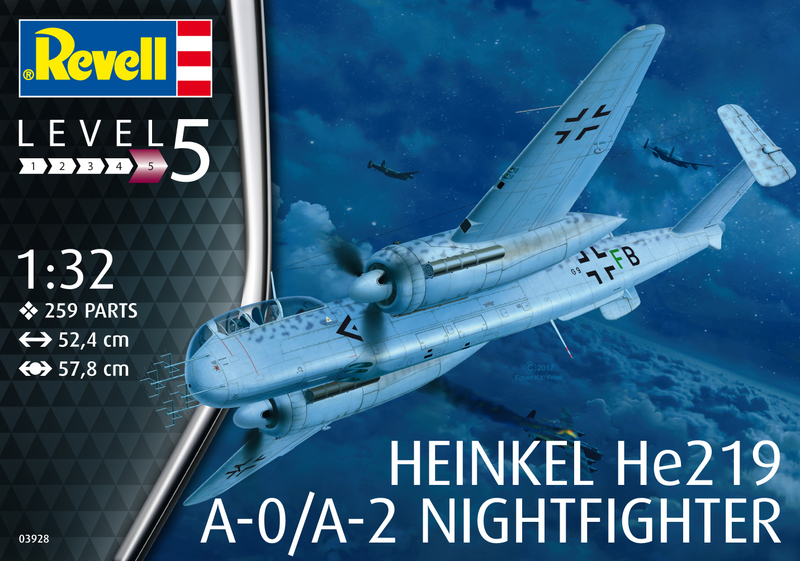 Revell of Germany released its original He 219A-7 kit back in 2012 to an enthusiastic reception. Iain Ogilvie covered this release for us in a fantastic build review article in 2014. Revell has now given us the earlier A-0/A-2 variant of this sleek, late-war nightfighter.

A cursory comparison between the two kits suggests that most of the plastic parts remain unchanged from the first release. The main changes involve the differing radar arrays found on each variant, with replacement sprues (J & L (x2)) to represent the applicable antenna configurations. There is also a new clear sprue for the rear canopy section to represent the A-0 version. 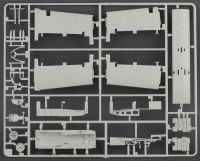 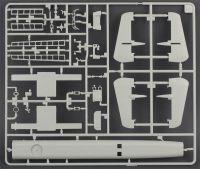 The level of detail is acceptable, with the moulding quality being generally very good. Panel lines are crisply recessed, and surface detail is well represented. There is a little bit of flash on the runners, but the parts themselves are thankfully free of it.

In something of an odd choice in this scale, the seats have crude belts moulded in to them: 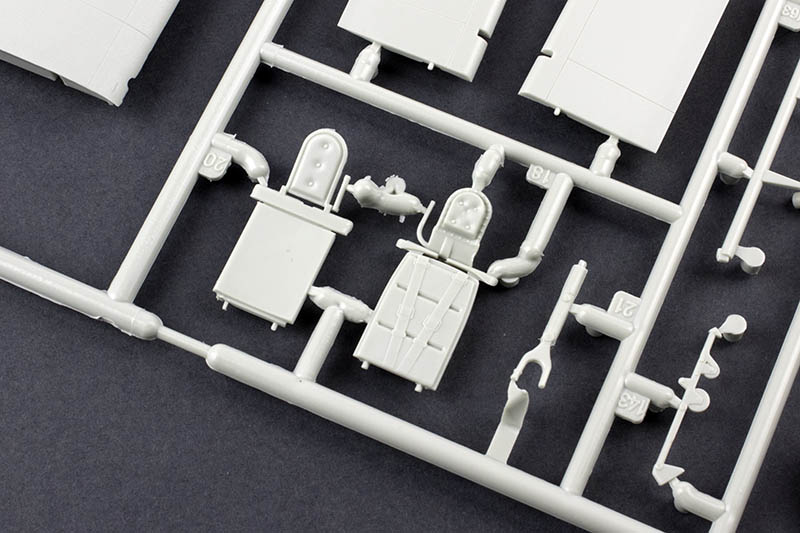 Thankfully, these should be simple enough to remove with some care, and replace with separate aftermarket seat belts. Alternatively, CMK provides a resin replacement seat set.

This kit does exhibit, however, one element in modern kit design that really frustrates me. With levels of petite detail in modern kits higher than ever before, I'm constantly amazed when I encounter sprue release gates attached to tiny, delicate parts, like the antenna arms below: 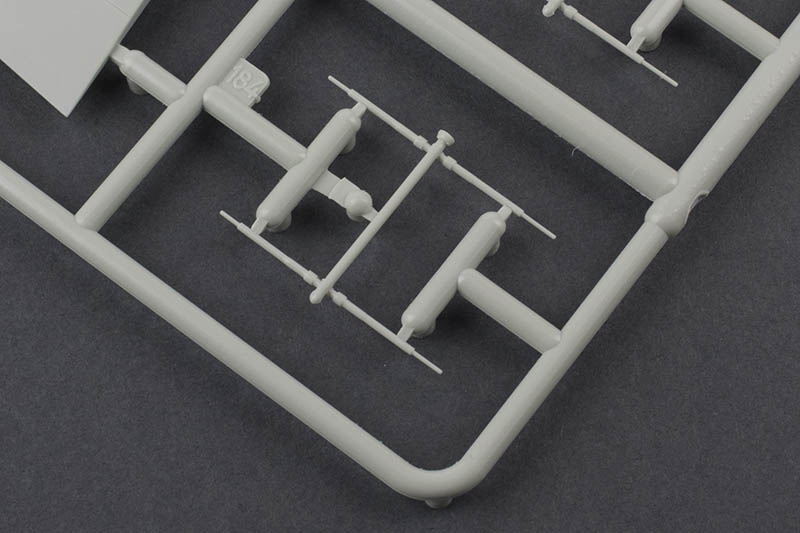 This is far from the worst example I've encountered, but is disappointing all the same. Perhaps kit designers are caught between a rock and a hard place here, but there must be a solution that doesn't involved the potential to render the delicate radar antenna unusable.

There are two clear sprues included in the kit. The larger one contains the main canopy parts, and is a hold-over from the first release, while the second sprue contains a rear canopy section particular to the A-0 version. Unfortunately these two sprues are bagged together, and there's a noticeable scuff mark on one of the rear canopy sections in my example.

The parts are well-moulded, clear, and largely free of unwarranted distortion: 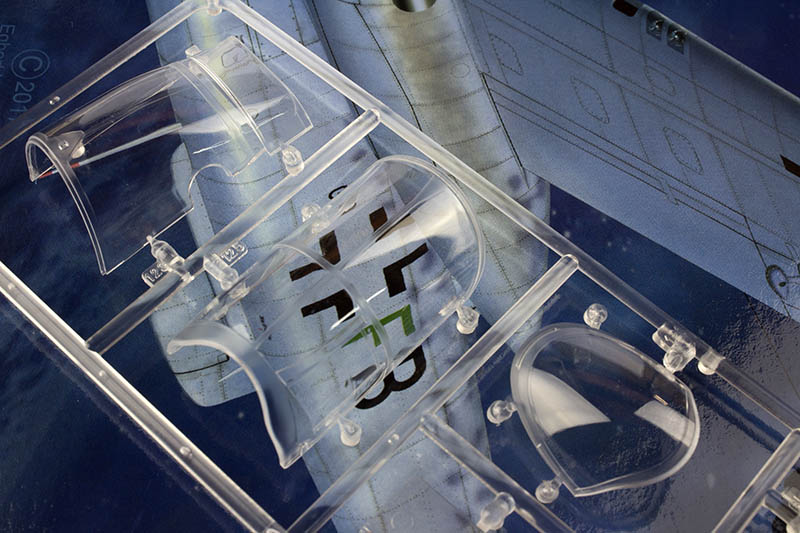 The decals are presented on one rather crowded sheet, which contains all the national and aircraft markings, along with instrument panel decals and a comprehensive set of stencils. 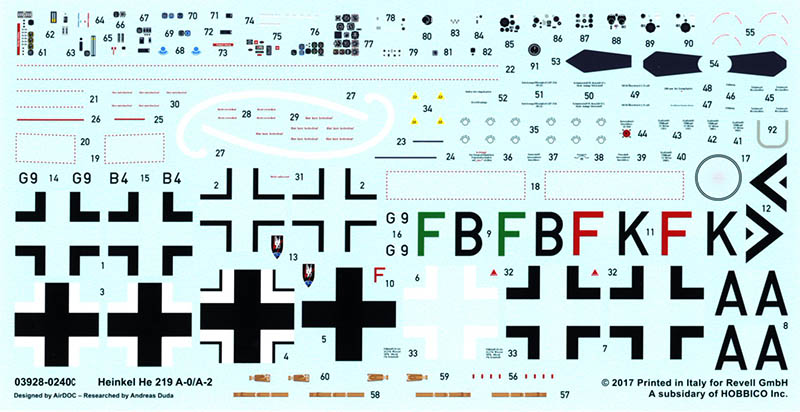 Printing is crisp with no registration issues, and colour density looks good. The printing credit is given as "Printed in Italy for Revell GmbH", which I presume to mean Cartograf.

Markings are provided for the following three aircraft:

Each of these schemes is basically RLM 75 over RLM 76, though the V-12 and A-2 options feature some black on the undersides. The painting and markings guide is presented in full colour, and features views from all four major angles, along with scrap views of the engines. Nicely done, Revell!

This is one area where Revell has made noticeable improvements since the initial release of this kit. With a new house style for box art design (but sadly, not the boxes themselves) comes a revised, full-colour approach to the assembly instructions. While still employing the traditional isometric exploded diagram design, the drawings are much more finely-rendered, and the pages themselves are much less crowded. The use of colour allows for much clearer differentiation between the different elements in each sequence. 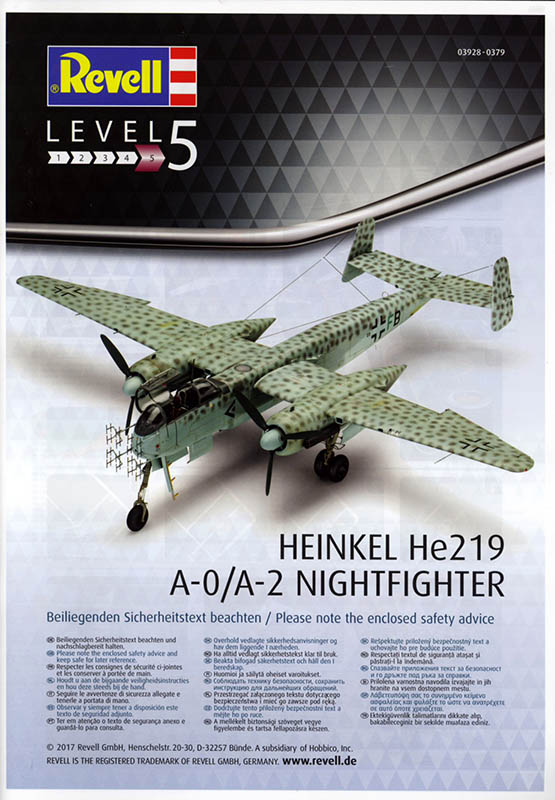 While they're not perfect—working out the different radar options is confusing—it's clear when comparing it to the instructions in the original kit just how much of an improvement this new style represents.

This is a welcome re-release of the He 219 kit from Revell, allowing the earlier initial variants to be modelled. While nothing has been done to address the shortcomings of the original release (see Iain's article for more details), the finished model looks every bit the part, and it certainly represents a much more affordable option than the Zoukei-Mura kit.