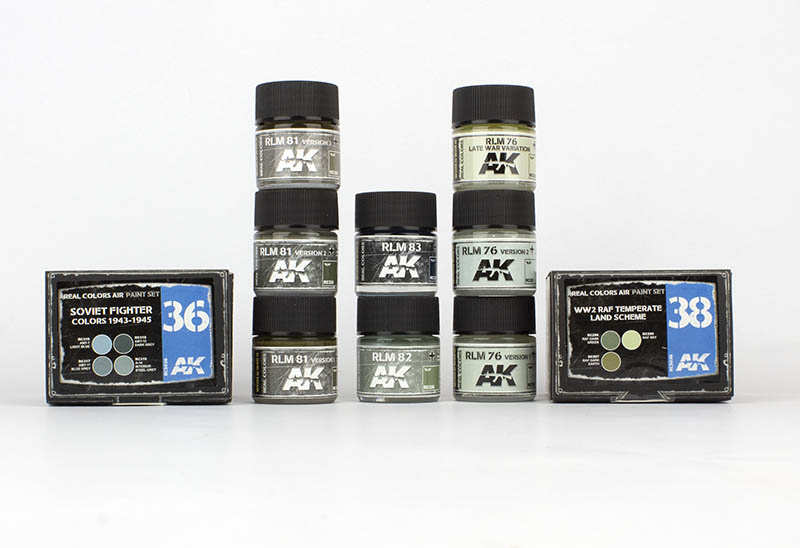 Spanish firm AK Interactive has, in a relatively short space of time, become quite well-known for its finishing and weathering products, of which it sports an extensive range. The company recently launched a brand-new paint range called Real Colors. These paints are acrylic lacquers, and come in 10ml glass jars, with plastic screw-cap lids. There are 114 colours in the new range so far, and AK Interactive has sent us a sample selection of 15 colours for review.

The selection we received comprised colours from the Luftwaffe, RAF, and Soviet ranges:

To test these new paints, I took some rectangular sections of thin white plastic sheet as a canvas for each set, and laid them down against equivalent paints from Gunze, MRP, and Tamiya, where they existed in my paint stash. I used my trusty Iwata HP-C Plus airbrush with a 0.3mm needle, and the compressor set at around 15 PSI.

The paints themselves need thinning prior to airbrushing, and for this I used Mr. Color Thinner, at a loose 50:50 ratio of paint to thinner. In practice, I found this thinning ratio to be slightly less than optimal, and would recommend at least a 60:40 ratio of thinner to paint.

Note that none of the photos of the applied paint shown below have been colour-corrected, and I make no claims to how accurately they represent what you see in the flesh. I show them for informational and comparison purposes only, on the presumption that whatever colour shift exists in the images, exists for all the colours equally.

AK Interactive has produced three distinct variations of RLM 76, and these colours are directly linked to the research spelled out in the company's companion book, Real Colors of WWII: Aircraft. They are labelled, quite simply, Version 1, Version 2, and Late War Variation. 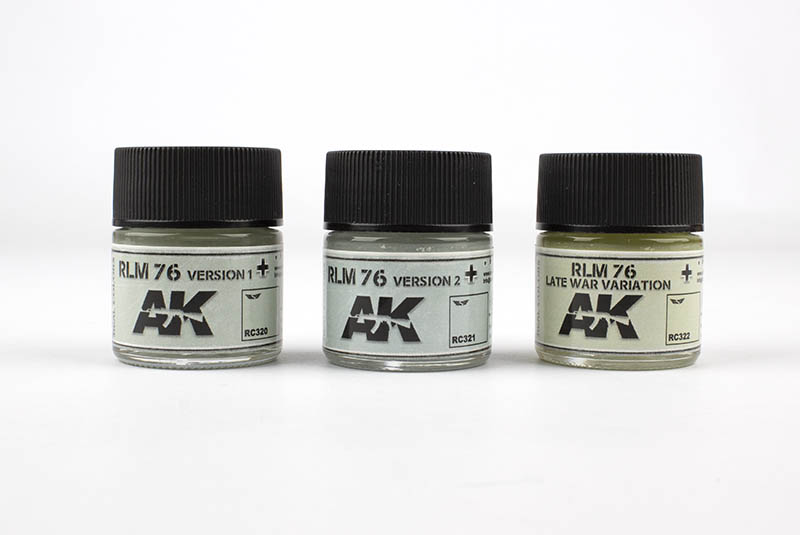 I laid the colours out on the top portion of the test card in order from left to right. I then took Gunze H-417 and MRP-66, and laid them down in the lower portion of the card for comparison: 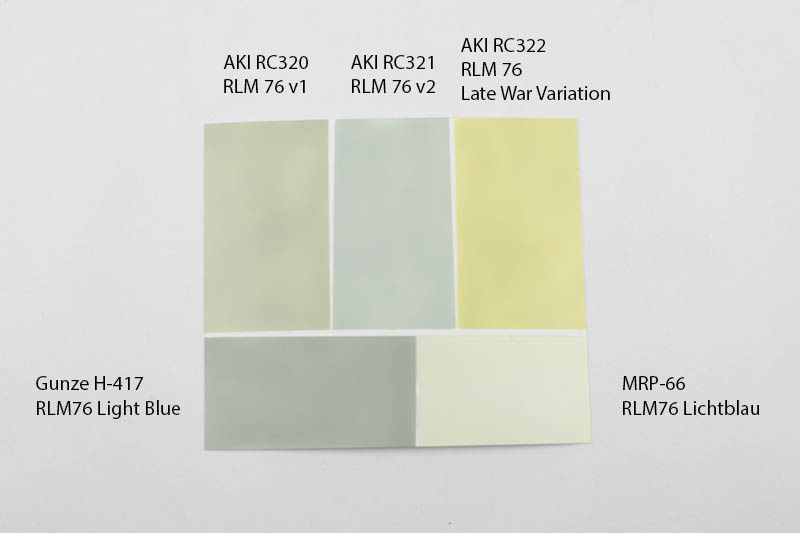 While the AKI variations are clearly meant to be different, it's astonishing how different either of the competitors' interpretations are from not only the AKI products, but also each other. My guess is that the Gunze product is attempting to represent the Version 2 colour, while the MRP colour is clearly going for the late war 'sky green' variation. Note that the MRP colour shown here may be slightly lighter than you may see on a model, as MRP paints are more translucent than either of the other brands, and I decided against laying down a heavy layer to compensate for that.

In terms of performance out of the airbrush, as I noted above, I found my default 50:50 mix with Mr. Color Thinner a little thick, and the resulting spray pattern was at first a little grainy. This graininess was in fact evident at all the thinning ratios I experimented with, but quickly disappeared once the coverage started to build up. The final finish was smooth in all cases, drying to a satisfying satin sheen.

Similarly to RLM 76, AKI has produced three variations of RLM 81, again distinguished as Version 1, Version 2, and Version 3, and again directly tied to the research detailed in the Real Colors book. 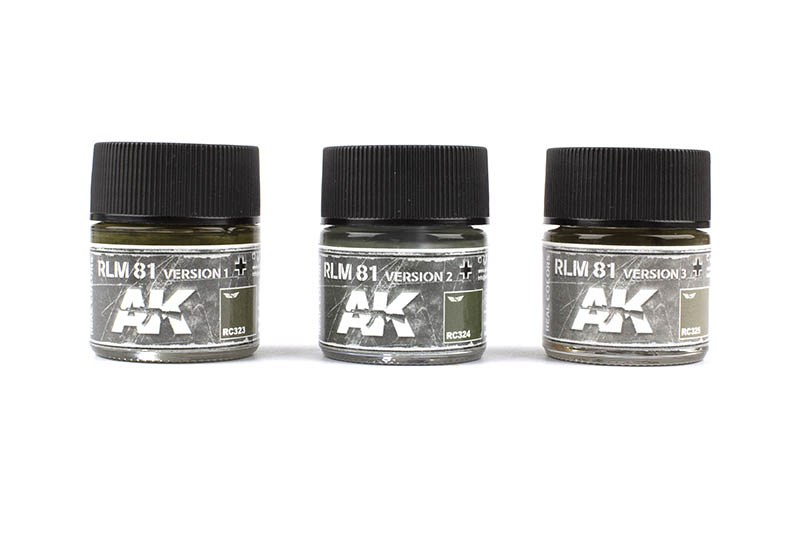 I applied exactly the same approach here that I detailed above for RLM 76, with the comparison colours in this case being Gunze H-421 and MRP-70. 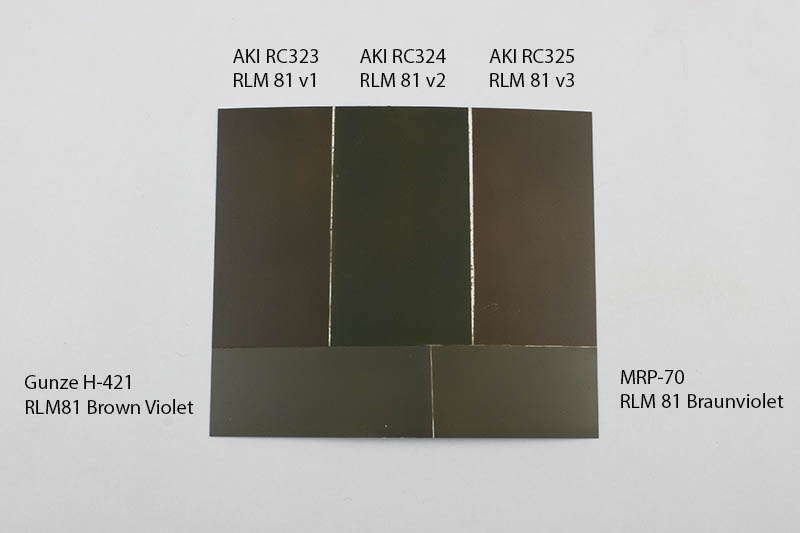 The differences appear less stark this time, and interestingly, the Gunze and MRP products closely agree, but do differ markedly from any of the AKI interpretations. AKI RC324 (v2) has a noticeably greener hue than any of the others, and it's worth noting here that AKI is not postulating three possible interpretations of the same colour, but rather, providing representations of the three distinct variations of RLM 81 (and RLM 76) that they discovered to have been produced.

I generally left only a few minutes between laying down one colour, and masking it off in order to lay down the next, and while I wasn't performing any deliberate adhesion tests during this process, I can confirm that at no time did I experience any paint lifting with the AKI product, nor any signs of the tape or its adhesive having any impact on the paint itself.

The final pair of Luftwaffe colours sent for examination are stand-alone versions of RLM 82 and RLM 83.

With regard to RLM 82, I employed the same approach as previously, laying down Gunze H-422 and MRP-71 for comparison: 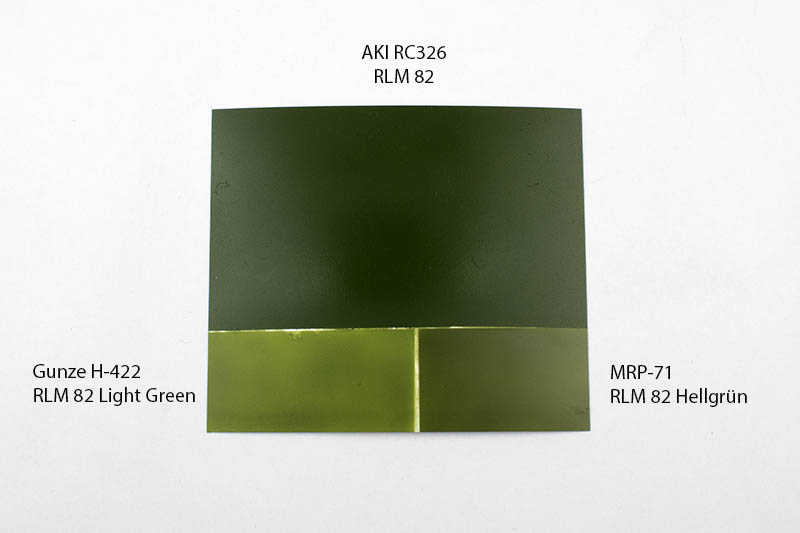 Again, none of the brands agree, so choose whichever version looks right to you.

Looking at RLM 83, I had no alternatives to compare it to, and given AKI's unique take on it, this would have been somewhat redundant anyway. In keeping with the research covered in the Real Colors book, AKI has produced this colour as a deep blue:

This will be a controversial interpretation for some, but the rationale is detailed in the companion book. Its operational use seems unclear, however, so it may not be a colour you ever put on a model in any case, which makes it an odd choice to produce as a hobby paint. Perhaps further research will eventually clarify these matters.

Unlike the Luftwaffe colours examined so far, the three RAF colours that comprise the Temperate Land Scheme are available as a boxed set. As you might expect, it contains the colours Dark Earth, Dark Green, and Sky. 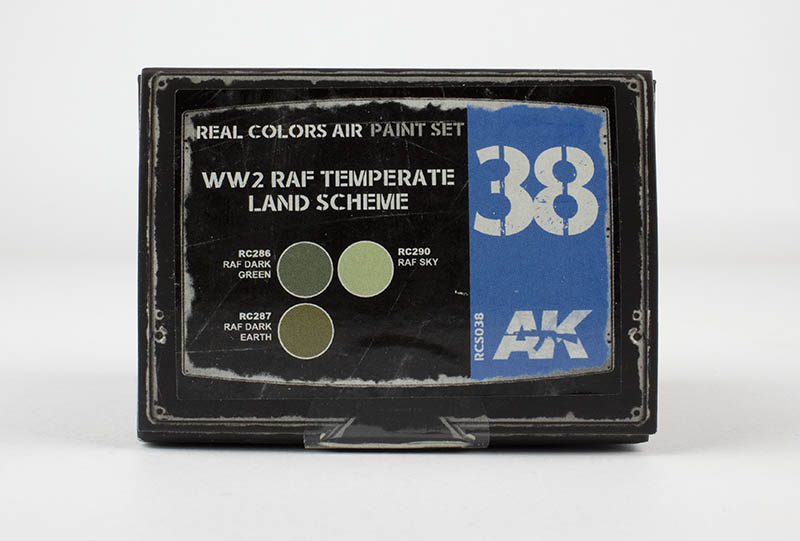 Employing the same strategy employed so far in this review, I laid each colour in the set down on the test card, and compared them to equivalents from Gunze and Tamiya, as shown below: 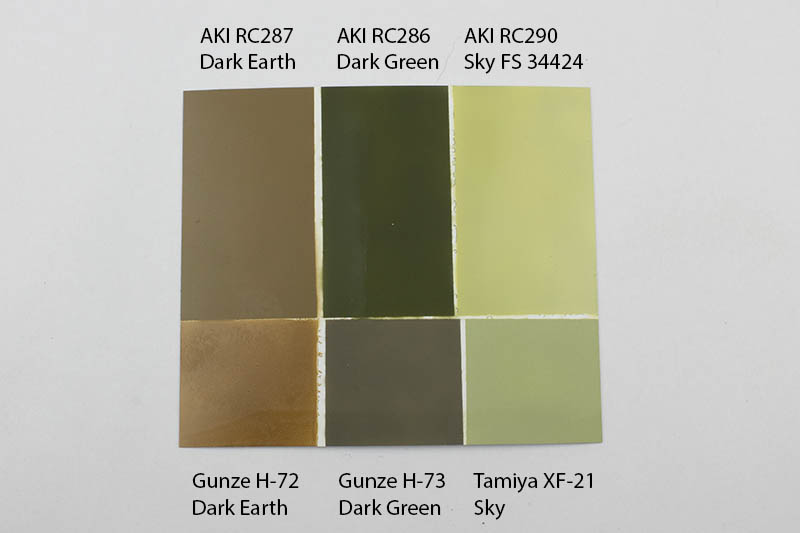 Note that the splotchy effect seen on the Gunze Dark Earth patch is caused by the masking tape laid over it to paint the next section. Unlike these new AKI paints, Gunze colours are susceptible to such things early on!

The main point to note in this comparison is just how much greener the AKI Dark Green is compared to the Gunze equivalent. The two browns are closer, so using this AKI colour set on a Spitfire (for example) would yield a noticeably different effect compared to the more familiar Gunze set. As ever, the choice is yours!

As with the RAF set, this set of four Soviet colours comes as a grouped set, and features the most common colours used on Russian fighters at the time. Included are AMT-7, AMT-11, AMT-12, and A-14, with the last colour being an interior paint. 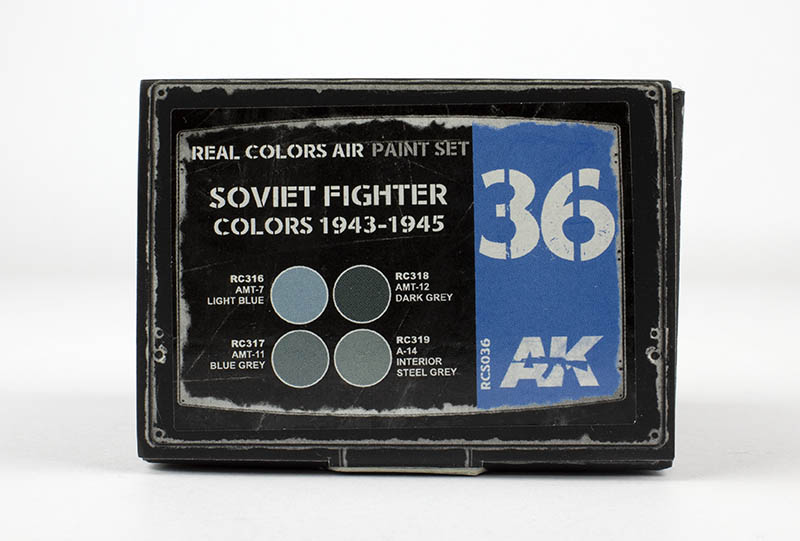 For the comparison test, I had an identical set of colours to hand from MRP, so I laid them out on the test card below: 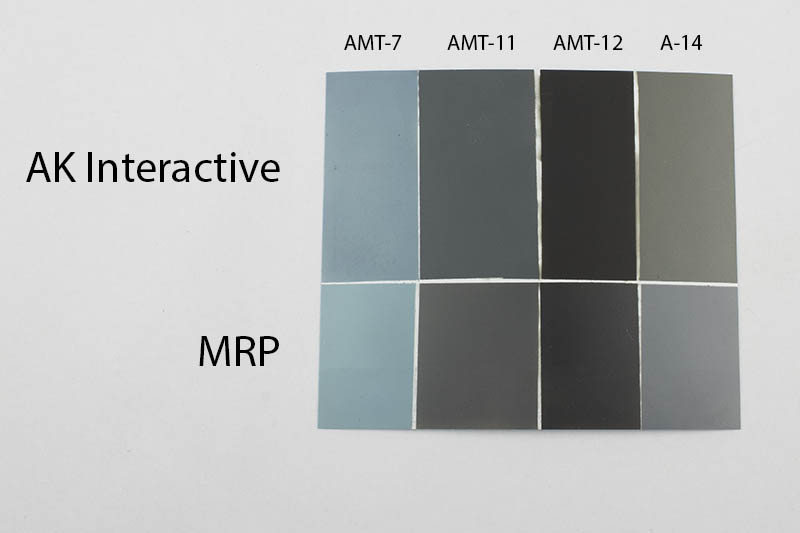 As a set, these colours are closer in agreement than any of the others we've examined so far, with the two interpretations of A-14 being the most different. As always, it's down to your own personal choice as to which ones you'd prefer to use.

From a performance point of view, there's no doubt that these new Real Colors from AK Interactive are quality paints. They spray well when thinned properly, have good colour density, and excellent adhesion properties. As far as colour accuracy goes, I can only take AKI at their word in terms of the level of research that has gone into them, and it's up to each modeller to decide for themselves where they stand on that issue. I'm certainly not qualified to pass knowledgeable judgement them, but I'm happy with what I see on the test cards.

Overall, I don't think you can go wrong with these paints, and provided none of the colour interpretations offend your established sense of accuracy, I think you'll be happy with the results. I'll be using them on an actual model build at the next available opportunity.