A dust filter was one of the more frequently seen installations on the Bf 109 series. It was designed for use on aircraft operating in sandy, wind blown environments saving wear and tear on the engine. Aircraft with this installation received the trop designation. 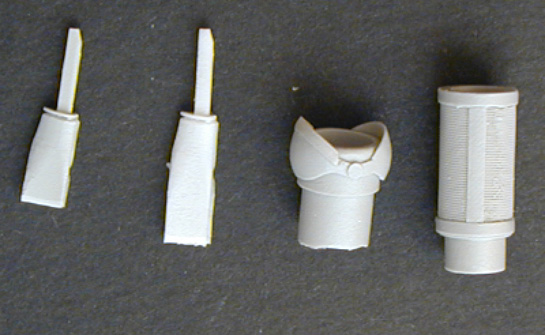 In this review, we will have a closer look at MDC's early tropical filter installation. A nice feature of this filter is that the forward clamshell door is cast in the open position, differing from the kit filter, which is supplied shut. A single page of instructions completes the set.

The 1/32nd scale Revell Germany Bf 109G-4 trop and Hasegawa Bf 109G-4 have a dust filter included. From the photos I have seen, it would appear to be a late style filter. While the filter in the model is adequate, it certainly could be improved upon. Additionally, many aftermarket decal companies offer markings for the Bf 109G-6 trop. It is impossible to accurately portray this variant, as a dust filter was not in that release. MDC has recognized this oversight and released two new resin dust filters in the early and late configurations. 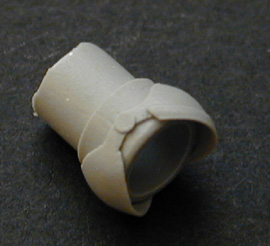 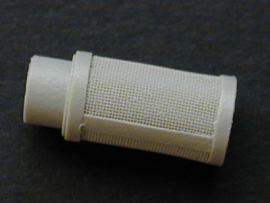 The casting is in MDC's familiar high standard. The filter assembly comes in four pieces and it is cast in grey resin. Surface detail on the filter is excellent with the screen mesh easily visible. A small casting block needs to be removed from the rear of the clamshell doors. Two small resin supports complete the assembly. They appear to be fragile and also require that casting blocks be removed, so caution would be in order. Modelers should note where the supports attach to the filter. I am sure that this would then be a simple matter to mount this assembly to the intake on the kit, though I have not tried it myself. 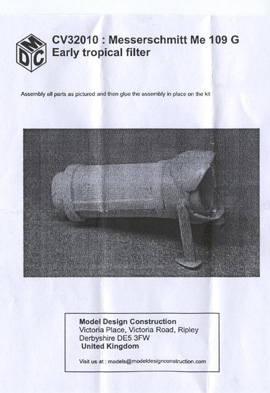 MDC supplies a small page of instructions for this simple installation. There is a minimal amount of text and a poor quality photocopied picture. I believe that this is one area where MDC could improve upon. The modeler will have to pay careful consideration when orienting the dust filter. Two straps of different width run the length of the dust filter on opposite sides. The instructions do not state which is the top of the filter and it is difficult to tell from the photo. As stated earlier, MDC supplies two different types of filters. Check your references carefully when determining the type of dust filter you require. Additional references such as Model Art or Aero Detail could be useful.

This is a simple conversion to perform. I am pleased that this popular option has been made available by MDC and I do recommend it. For those modelers wishing to build a Bf 109G-6 trop, or for those dissatisfied with the dust filter in the Bf 109G-4 trop, MDC supplies a very nice alternative. Note: Modelers should be aware that MDC used the Me prefix when listing the title of this filter on their instructions. I have chosen to use the more common Bf designation in the title of this review.