Rivets. Even for those non-rivet counters, this is a subject that always rise discussion. Quoting Chris Sherland in his Rosie the Riveter review: "...I won't begin to touch the subject of whether or not one should add rivets to your model". Me neither. But if you want them in your model, sometimes you face the problem of depicting accurately the so called "flushed rivets" and fasteners. Flushed rivets are merely ball head rivets whose heads were ground flush to the aircraft skin to reduce drag. In either case, you can see the circular area of the rivet head. Due to its diameter, you cannot authentically replicate the effect using needles or pounce wheels. At least not in 1/32 or larger scales...

The rivet embosser is an interesting tool designed to ... well, emboss rivet heads in your model. This is another item from the old TryTools now traded by Hasegawa. It is simply a pointed device mounted in a handle. The difference is in the perforated end, designed to emboss a small circle on a soft surface (plastic). Manufactured in hard steel, it will surely last thousands of rivets. 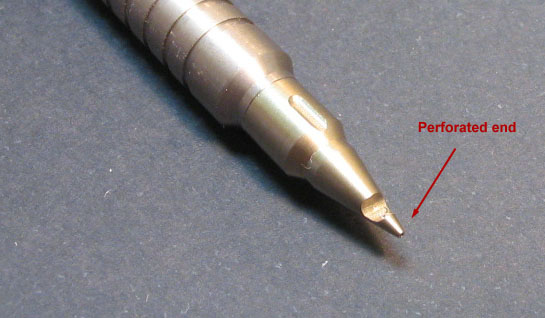 The end of the tool is screw threaded, supposedly to interchange the ends to allow different rivet diameters. I´ve never found a different head sold separately, though. There´s also a small stiff wire included to clean the perforated end in case of clogging (just like mechanical pencils).

The use of the tool is simple: use a graduated ruler to align the embosser and regulate the desired rivet pitch. Press it firmly against the surface and move on to the next one. The pressure necessary to make a clean rivet will depend on the brittleness of the plastic, so try it before in the inner areas of your fuselage or wing parts. You won´t need much pressure, though, because the point of the embosser is very sharp. 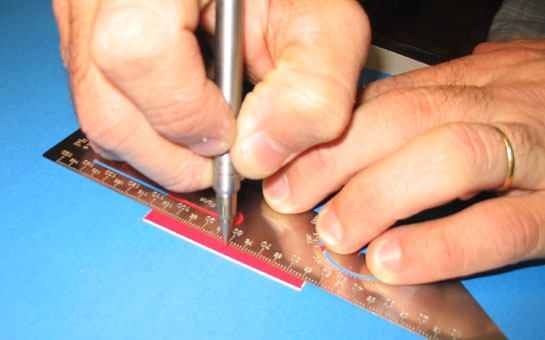 Testing the tool on a piece of plastic.

Even during a loose try-out for the photo session of this review - using my eyeball Mk.I to regulate the pitch - I got very consistent rivet lines in a matter of seconds. This tool makes rivets of about 0.5 mm in diameter. Is it tedious? Sure, but I know a couple of folks from Japan who cover and entire aircraft model in two days, and the results are impressive. 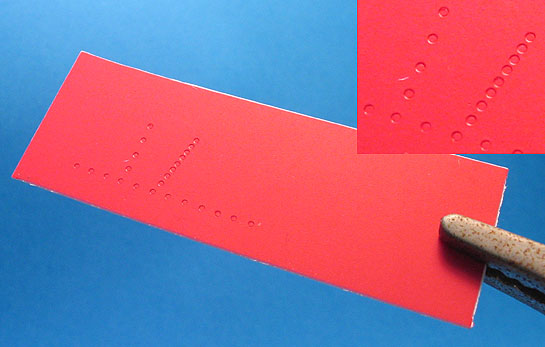 You don´t need to cover the entire model with these rivets. Most of the times all you need is to add fasteners around maintenance panels and cowlings. It will add only a few minutes to your building time, and the results will pay-off ten times the time spent.

Recommended to everyone crazy about rivets.