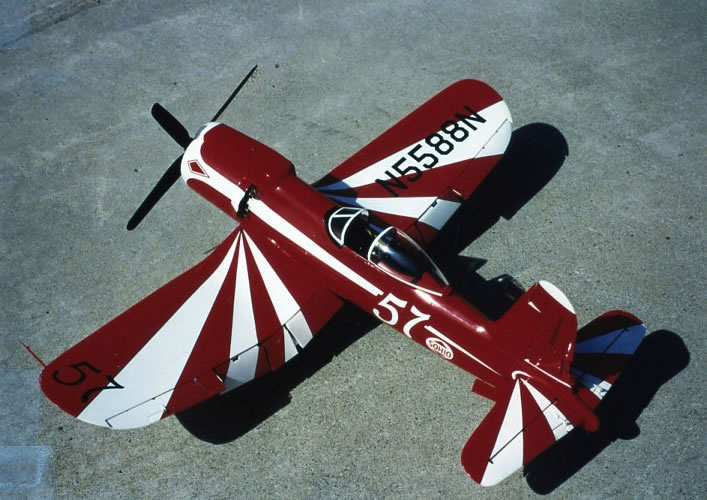 You will note that I have several missing photos in this story. This was the first time that I took “in-progress” photos of any models of mine.

Any ways I did not mention in my last story how I carved out my wooden mold for my windscreen-canopy. All I can remember is that I made the mold oversize then pulled a “vac” of it and trimmed it to size then fit it to the model. It was too big so I had to shave off some of the wood on the mold. After 3 or 4 tries, I got a windscreen and canopy that fit perfect.

From then on when other modelers ask how I scratch-built a part the answer was always: “It was cut and fit until it fits”.

My first photo shows that I have painted the model with green and black paint. Another modeler told me to paint it this way and/or I dreamed it up on my own. 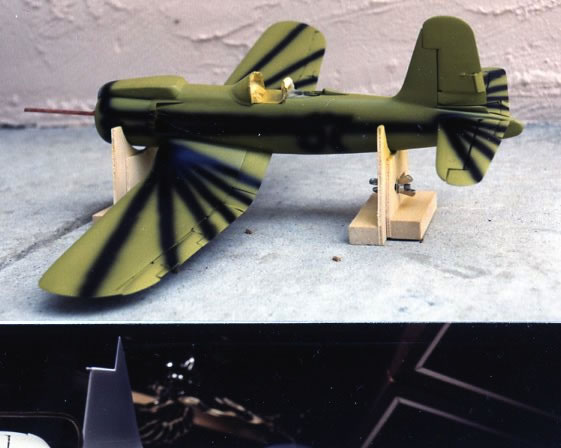 The next photo shows that I have added some 1/64” wide “Graphic Art” tape to represent the divisional color line between the red and white paint. Once the tape was placed on the model it was painted with Model Masters white enamel paint. 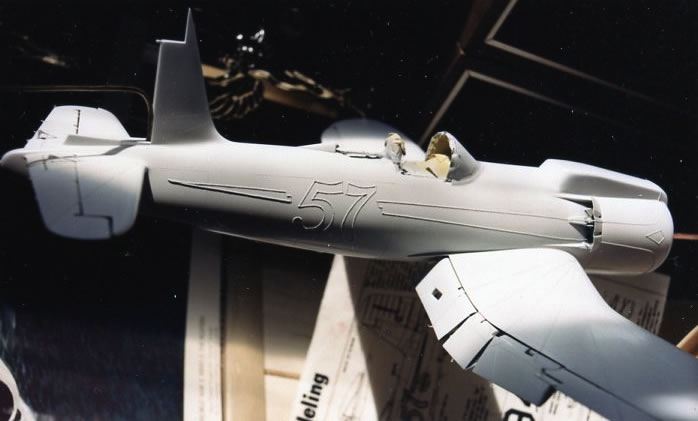 Certain white areas of the model was mask off and then the red color was applied. Once dried, the tape was removed and that is when “disaster” struck. The tape left a very irregular edge and pulled the black, green, white and red paint off the model. The total finish turned to crap.

I used paint thinner to remove the enamel paints and it made some of my white styrene parts so soft that they turned to mush and just fell off the model. I had to remove a dozen or so parts and rebuild them.

My next paint application started with the new Tamiya Acrylic paints. The bare plastic was washed with soap and water then rinsed off with clean warm water. The plastic was cleaned again with some “Denatured Alcohol,” (DA) and rubbed down with clean cotton balls.

Everything looked ok this time so I applied my pre-mixed X-2 Gloss White Tamiya paint all over the model.

The late famous scratch-builder Mr. George Lee told me to mix all my future paint with at least 4 parts thinner to one part paint. George said that I could use the non-expensive household “DA” @ $6.00 a gallon rather than buy Tamiya’s ¾ ounce of thinner at 50 cents per bottle. A U.S. Gallon contains 128 ounces. A gallon of Tamiya’s thinner is more than $70.00.

“DA” has been used with all of my Tamiya paints since 1987 to my present day applications. A 4 to 1 ratio has been an excellent start for me using any brand of paint.

When I used “SnJ Spray Metal Aluminum” there was no need to add thinner and the same goes for your new Alclad types of paint.

A couple of years ago I left a bottle of Alclad paint uncapped and when I got back to it several days later it was like “honey” in the bottle. At $8.00+ per a 1 ounce bottle I just could not toss it out. I got the bright idea of adding my old favorite thinner to it and yes indeed it was none other than my “DA”. I used my Badger paint mixer and stirred it up and I applied it to one of my models. The model still shows the excellent paint job with the honey-like Alclad.

After the gloss white paint dried a day or two, the model was carefully mast off with my “3M Scotch-230 Drafting Tape”.

The pre-thinned Tamiya X-7 Gloss Red was applied on top of the gloss white paint. The masking tape was removed from the model within a couple of hours. By mixing the Tamiya paints with the “DA” it makes the paint dry to the touch within 30-45 minutes and with some caution you can handle the model.

“How am I going to apply the thin 1/64” wide black division lines between the red and white paint colors that were butted together? I put my brain in gear and pondered several ideas of “HOW-TO”.

These thin strips of decal film were applied under normal decalling operations but took some time getting them in proper alignment.

The black lines can’t been seen in some of the full length photo, but they show up real nice in my close-up images.

You will note that I put some modeling screen inside of the air intake and later discovered that they never had any screens in the intake. I left it in for fear of destroying the front of the model.

I built a nice wooden base for the model and added some modeling grass, an angle cut mirror, a data engraved tag, including a plastic cover. 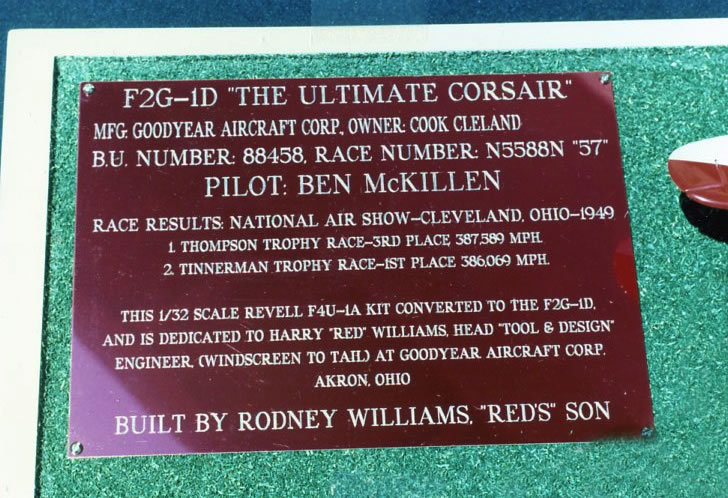 I decided to take the model on the airliner from San Jose, CA to the 1987 IPMS/USA Washington D.C. National Convention. It made it there and back safe and sound.

To my surprise the model took a first place award at the convention. Later that summer I was invited to enter the model at the IPMS/USA Orange County annual model contest.

The model was displayed at out annual model show at Moffett Field, Sunnyvale, California when the “Blue Angels” came to town.

There was a small write-up in FineScale Modeler magazine.

In 1988 I transported the model to the National IPMS show in Dayton, Ohio, whereby the new owner took it to his home in a far off land.

This is the end of #57 so I hope you have enjoyed the stories. 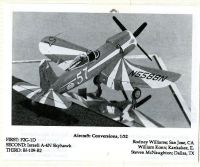 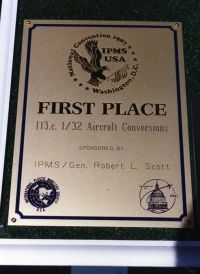 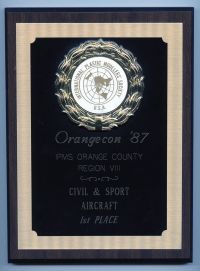